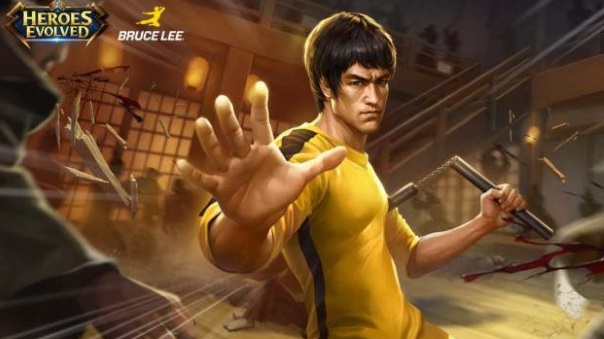 Are you a fan of Bruce Lee? Well he’s officially on his way to MOBA Heroes Evolved! Many games have emulated or downright copied him, but Bruce Lee, LLC (owned and operated by Bruce Lee’s daughter, Shannon Lee) teamed up to officially bring him to R2Games! The King of Kung-fu action films comes to a game in a genuine, real form. Accept no substitutes! In addition to this there will be serveral in-game/community events to promote this exciting moment in MOBA history! R2Games worked with the Lee family closely and with motion-capture technology, created Bruce Lee and his in-game skills will be based on some of his most famous features, such as Enter the Dragon and The Green Hornet.

“We are very proud to be the first to officially bring Bruce Lee to the world of MOBA games,” says Yumin Wang, R2Games’ Global Publishing Director. “We’re longtime fans and can’t wait to pit all our other heroes against the world-renowned Bruce Lee!”
#heroesevolved #brucelee #moba