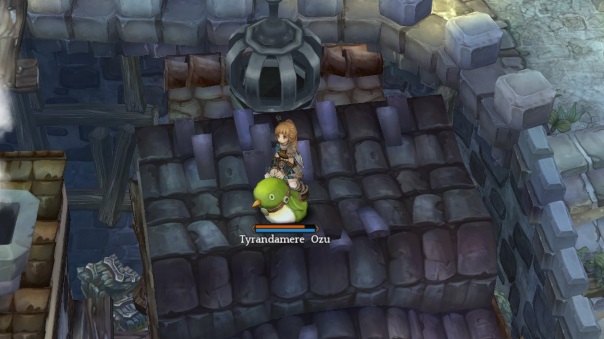 We have another new column this morning! We’ll see how it goes. The premise is I’ll go back to an MMO I’ve not touched in a while (or have never played) for a couple of hours, then document the process here in some form. If there is a game I should try this on, please let me know in the comments, or on Twitter!

It’s been a while since I’ve been back to Klaipeda, my home in Tree of Savior. I reviewed it back a year or so ago, but did not find myself continuing to play much longer after that. It wasn’t that I wasn’t enjoying it because I love things about it, but it was part “I’m too busy” and part “My friends aren’t playing”, so I fell away for other projects. However, since I’ve been away, a fair amount has changed in Tree of Savior. I’m still reading a lot about Necro AFK farming on Bees, but I will need to adventure more to find out about that for myself.  I had a Cleric on two different servers, around the 30s or so, so all told, they weren’t very far. I feel as though leveling is a bit faster right now though. Maybe it’s just me, but I started a fresh character yesterday, and though I did have an EXP Boost Tome waiting in my mailbox, I went from 1-26 in a couple of hours. That also required the use of the many EXP Coupons I received for completing quests again and again. I’m sure someone will say that that was a waste and I ought to save them. But I was not terribly concerned with that. I was still in the first few 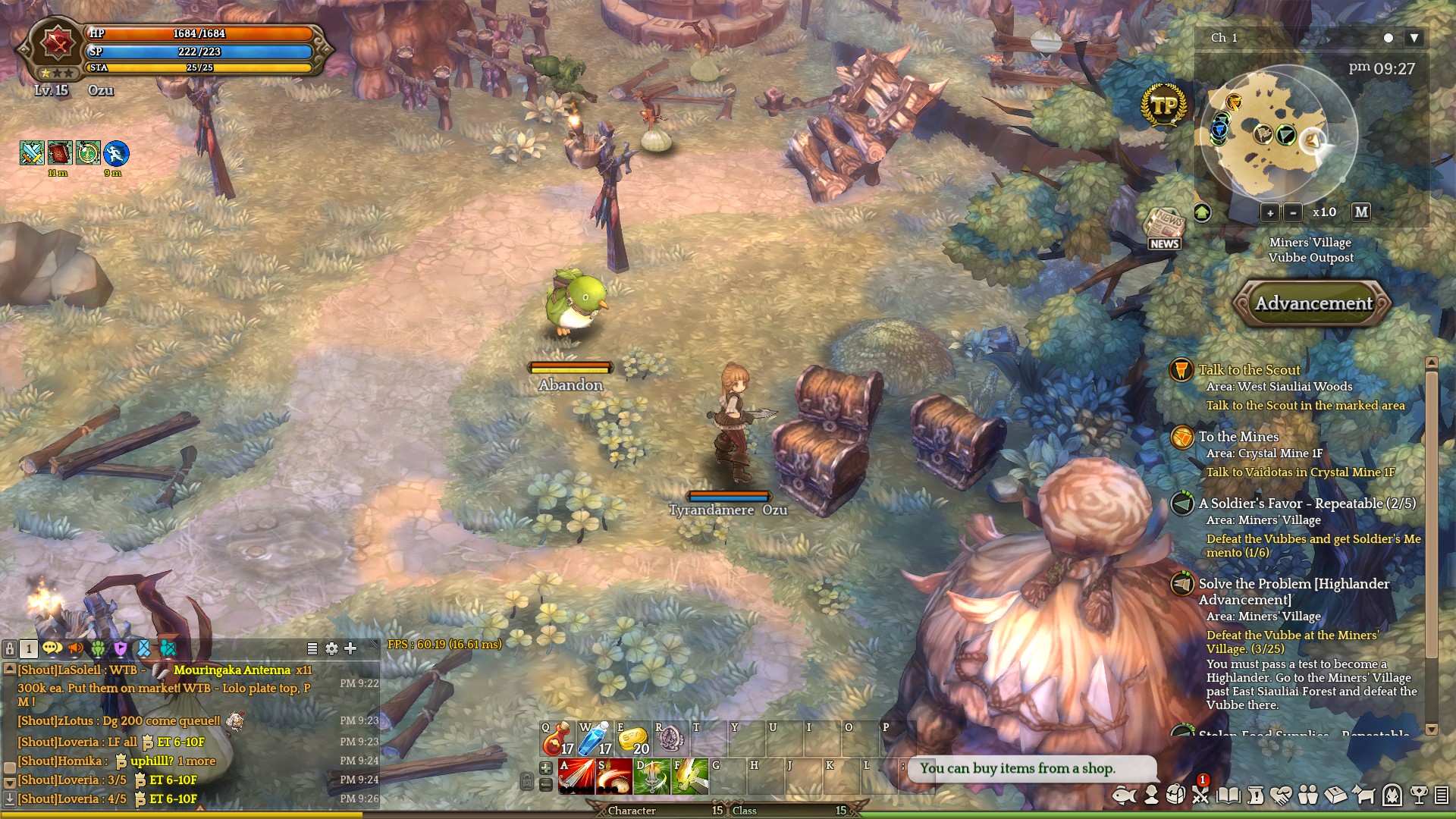 I was so mad. #FakeChests

That also required the use of the many EXP Coupons I received for completing quests again and again. I’m sure someone will say that that was a waste and I ought to save them. But I was not terribly concerned with that. I was still in the first few areas and found myself stuck on a quest at the end, which was very frustrating.  The choice to not play my old character is more to try something else and less not being happy with the first one.  The priest was okay, but laying down traps and all spells on the ground were actually pretty annoying after a few hours of doing it. Having to lure enemies into a trap on the ground as a Healer, just to deal moderate damage? Tedious. Why would I do that when I could just swing a really big sword at any cute, fuzzy creature that happens to impede my progress? So that is what I did; I began the road of a Swordsman. 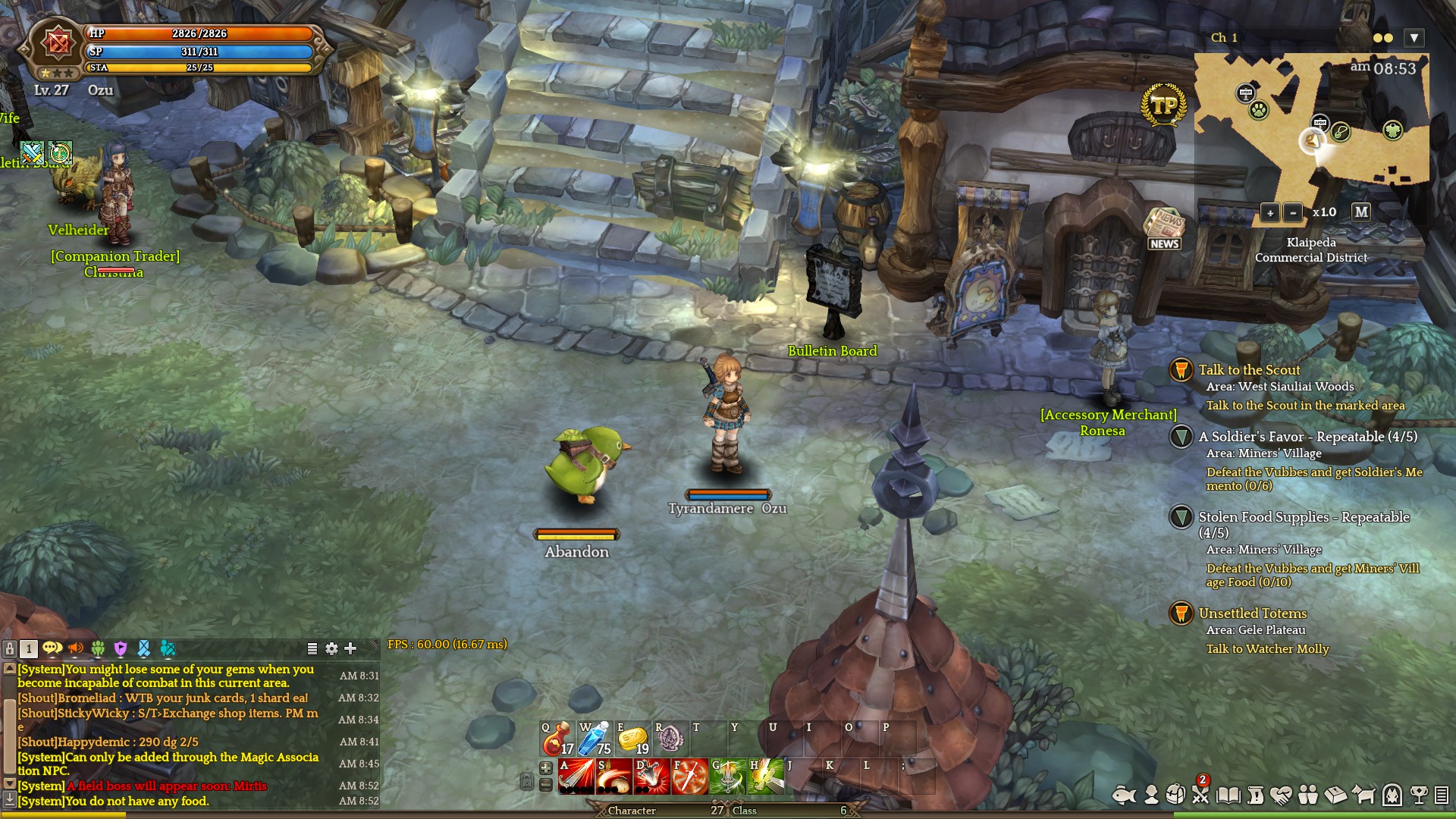 BASK IN HIS CUTENESS. I DEMAND IT.

The coolest thing about this trip is that there was a pet waiting on me! A pet/mount that will fight at my side, I can pat it on the head when it’s doing well, and ride around on it to conserve Stamina, which is at a premium when dashing. And it is a Penguin! A green Penguin no less! Penguins are my favorite animals and green is my favorite color. It’s practically Serendipity. And it flails its little flippers and makes squishing sounds when it runs! That right there was about enough to keep me going. So I bound it to this Swordsman and set back into the world anew. I have to say, I still feel a bit uncomfortable with murdering hosts of adorable creatures. Maybe that’s why I didn’t play Ragnarok Online? Who knows? I accomplished a bit in this journey though, helped people clear their fields, bought a new sword, and upgraded my class! I still enjoy that it uses a separate class/character system, so while my character might be 26, my current class (Highlander) is only level 6. And when they get to a certain point, I can opt to stay as a Highlander (Circle 2) and gain new Highlander powers, or move on to a new subclass. In and of itself, this is definitely interesting. But I hit a snag. Something that genuinely frustrates me, because now I have to redo an entire quest chain, just to progress through this area I’m ten levels too high for. As of at least April of this year, there was a bug in the Crystal 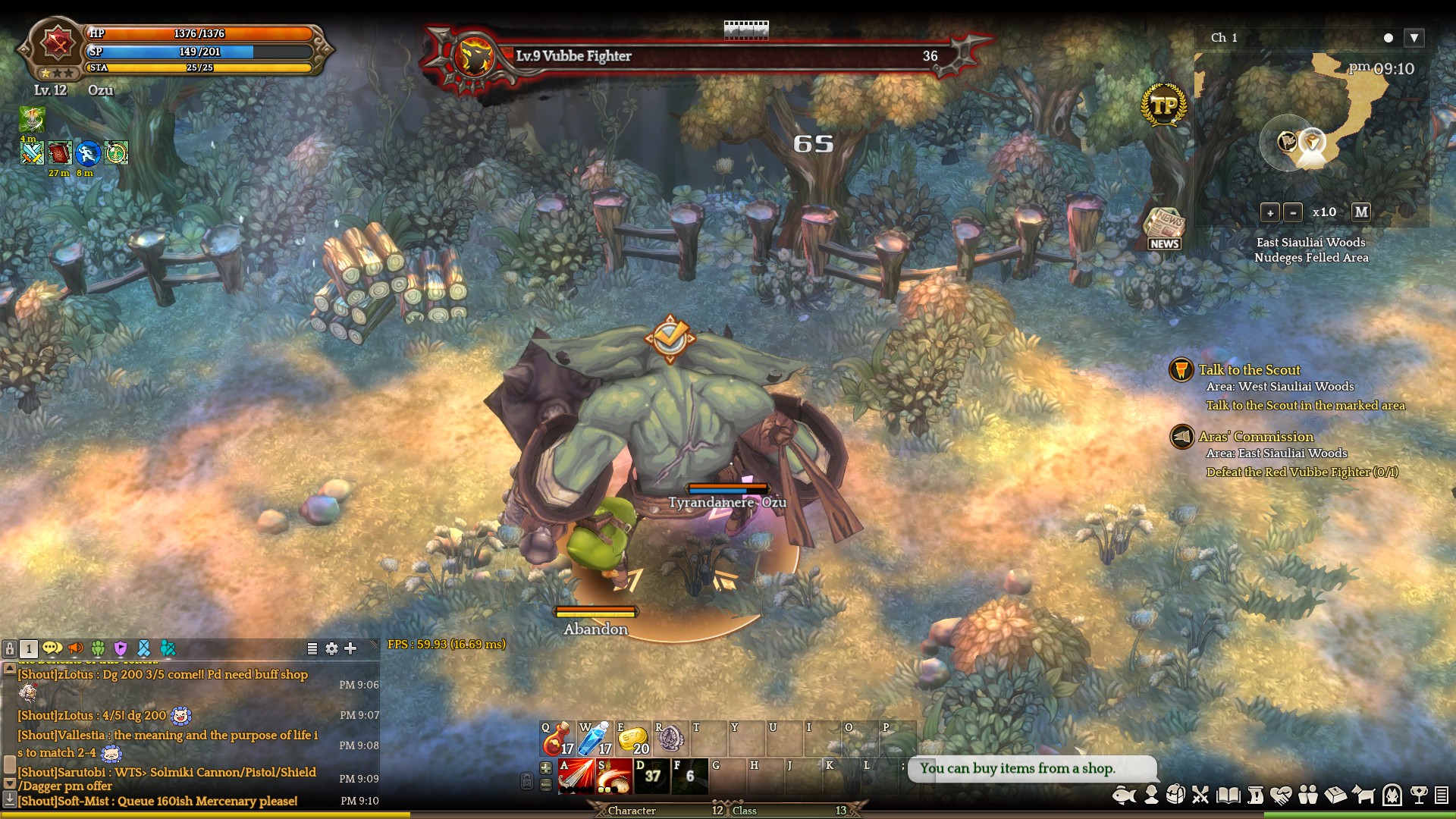 I distracted myself from being annoyed with bugs by combating evil!

But I hit a snag. Something that genuinely frustrates me, because now I have to redo an entire quest chain, just to progress through this area I’m ten levels too high for. As of at least April of this year, there was a bug in the Crystal Mines where you could bug Floor 1’s subquest and have to redo the entire thing just to proceed. And that might not even work! Some people redid it more than once to no avail. That’s fine in the early phases of the game, or in beta, where something like that should have been snuffed out. But it’s October of that same year, and that bug still exists. It’s not game-breaking, but it sure is annoying. For me at least, abandoning the quest and redoing it only made me redo one step of the chain. Somehow, it fixed itself. I just think this is a gross oversight that should have been looked at. I do have to say though, these guards are incredibly greedy. I’ve been doing side quests for them since sometime last night. I think I’ve done this same quest five or six times now. Is it easy? Incredibly. But I feel like I’m just wasting my time. The positive side at least, is I have over 40 Exp Cards! I have a pile of rare gems that I have no idea what I’ll use them for, and lots of equipment I can’t use! That’s any MMO, so that’s nothing new. Overall the experience was fairly positive. It wasn’t dead like I worried it might be, but I saw more people idling and selling items as opposed to adventuring. 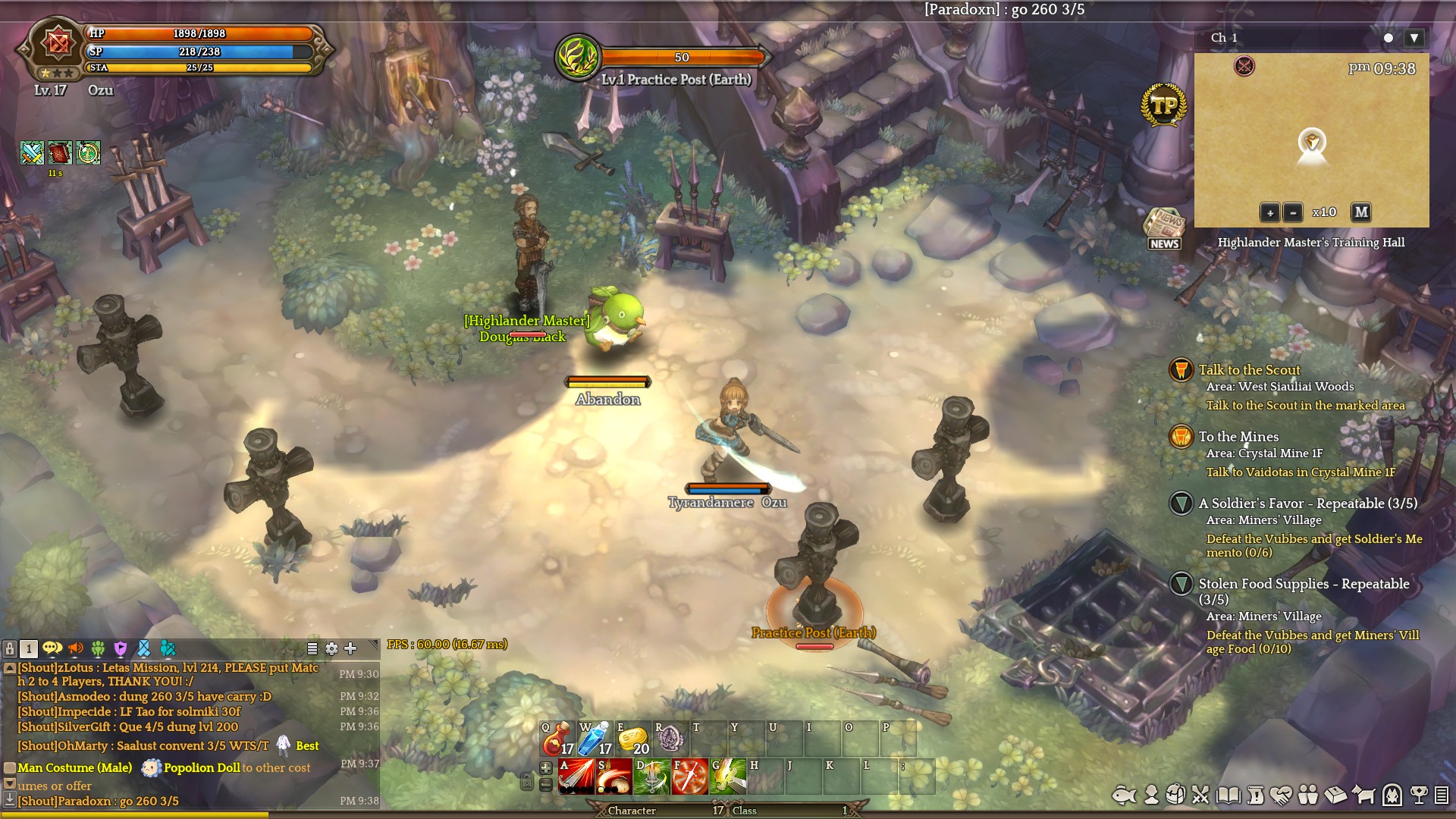 There can be only one. What? I love Highlander.

Overall the experience was fairly positive. It wasn’t dead like I worried it might be, but I saw more people idling and selling items rather than I did exploring/adventuring. I guess that’s where the real money is, being a merchant. I still think the controls are awkward and weird. I was going to use Elsword for this, but I found those controls to be even more annoying! Maybe it’s all the Western MMOs I play. I’ve grown used to WASD for movement, and not abilities. And having my menu items on the F keys? Weird. I can just click on them at the bottom of the screen, but that’s far slower. Between that and Pet Food being pretty expensive at low levels, I had an enjoyable time back in Tree of Savior. But the fighting was fun, the questing was well worth it, and I’ve gained some interest in coming back to Klaipeda for more adventures.