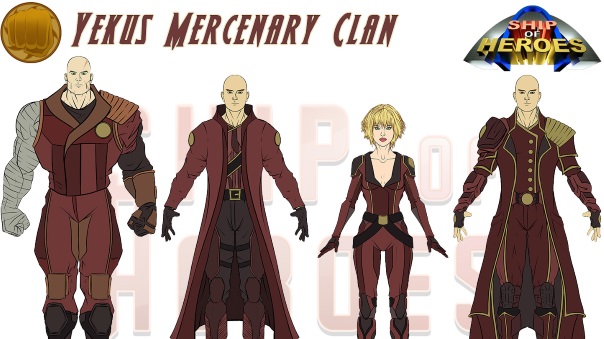 This weekend we learned of a deadly new Villain group coming to Apotheosis City and Ship of Heroes! A human, non-Super mercenary crew has come: The Yekus Mercenary Clan! They are primarily human, but are at their core, a multi-species group, and function as soldiers-for-hire. It’s one of my favorite comic tropes, the private army of humans in a world of super-powered beings. They use cybernetic parts along with high-tech weaponry, and do recruit Supers though are not set up on a structural point to use them efficiently. They are not the only private army in the Ship of Heroes universe, though it’s not unusual to find them hired out along the FHS Justice.  Numerous and not specialized, they serve as hired muscle for a variety of factions and operate on eleven worlds. The Yekus Clan’s leader aboard the Justice is Matthew Ingles, more commonly known as ‘Mad Matt’ due to his recklessness and preference for personally leading his troops in fights.  He is strongly suspected of having super powers, but he carries and uses such a wide variety of homemade techno-gadgets that it is hard to tell what his innate abilities might be. The Yekus will be made with the Ship of Heroes character creator, so players will see a great deal of variety in how they look, from females and males, cybernetic implants and so forth. Even their physical features will vary, showing them as a truly varied force in this world.