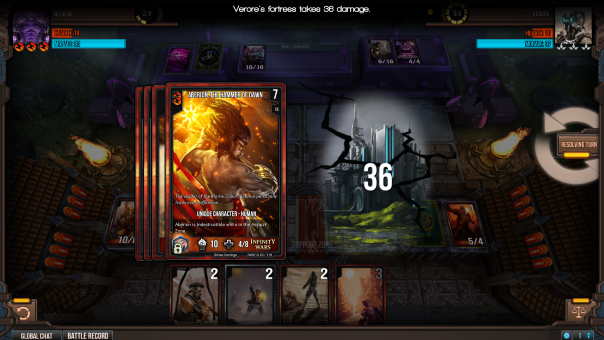 Infinity Wars, a digital trading card game with fully-animated cards combating in 3D battlefields, has received an enormous content update and a nearly-complete overhaul of its art and user interface.

Currently in beta, Infinity Wars: Reborn has taken its first step towards launch on Windows and Mac via Steam by launching the first of four waves of the new Rebellion Card Set.  Developer Lightmare Studios and publisher Yodo1 plan to take the game out of beta and release Reborn in Q4 2016.

Infinity Wars: Reborn’s beta update also expands on its predecessor’s player-versus-player (PvP) gameplay with the new Fixed Deck Arena mode, and introduces the first Designer Deck Bundle DLC, a set of six highly-competitive decks designed by ES, one of the top ranking players in the Infinity Wars community.  Ideal for beginners, these decks were designed by top players in the community to level the playing field between newcomers and veterans.

By launch in Q4 2016 Infinity Wars: Reborn will introduce more than 100 new cards from the upcoming Rebellion Set; the first wave of these cards has arrived in this week’s update. These new cards will compliment the collection of over 750 cards currently available in the Infinity Wars universe.