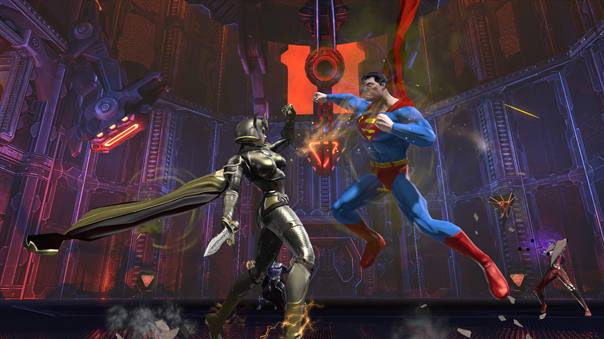 Daybreak offered up a peek at the content that is now available to members of the DCUO game. I’m talking of course about Halls of Power II, the second in a content trilogy that is being created for the MMO, based around Jack Kirby’s “New Gods” content. For non-members, it will be able to be purchased at the usual price, on 5/19. From being kidnapped and brought to Apokolips, to the planet of New Genesis, there is a lot to see and do, from solo content, duo, alerts, and even a raid. Previously in the trilogy, players explored a Necropolis, and we aren’t done there! But no matter if you are a hero or a villain, you will be sharing a space, fighting on one side or the other, either with the Parademons from Apokolips, or the Bugs, vying for dominance in a vast war. It all ties together rather nicely, and there are really cool features on offer; for example, the League Halls that were introduced in Halls of Power I are a part of how we are introduced to the story of Part II: The forces of Darkseid invade and try to kidnap you! 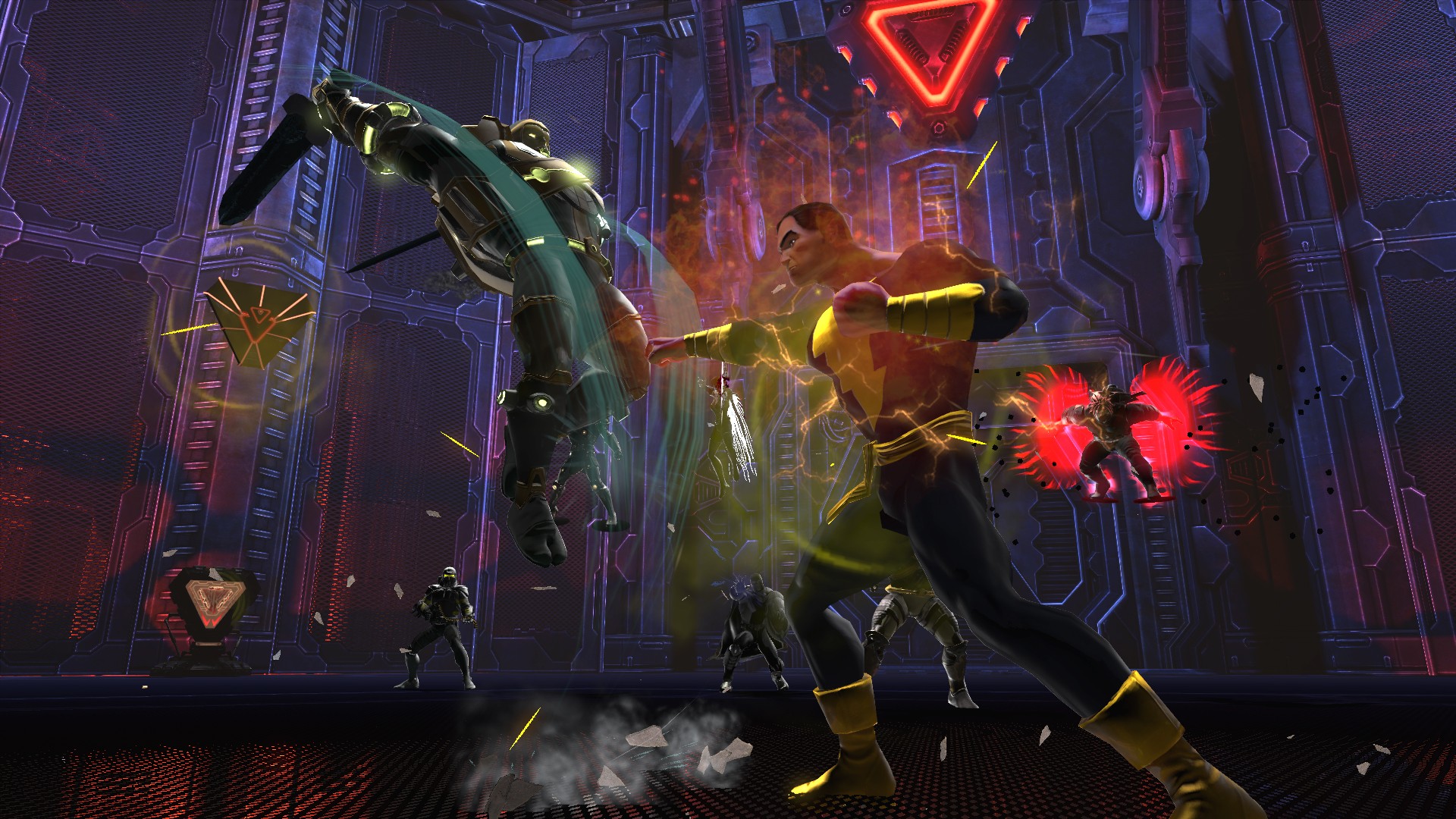 The areas are gorgeous, and the Happiness Home of Granny Goodness is the visual I expected it would be, down to the propaganda on the walls, brainwashing heroes and villains alike to serve the will of Darkseid. Although not a hardcore DCUO player, my comic book geekdom was fawning over this update as Darkseid is one of my favorite villains. Even if we as players do not fight him in the trilogy of episodes, his presence and impact on the storytelling is enough to make you smile.

As a side note, Daybreak confirmed during the stream that DCUO will be adopting the Everquest II style of smaller more frequent content batches, as requested by the community. This will also allow for Daybreak to have a better relationship with DC Comics, which they announced will be building a better tie with the brand they get their content from, offering more storylines and episodes that fit in with the comics. When they were producing three month huge packs of content, it gave them less time to work. Things seem to be on the up and up ever since the Daybreak Games split!

Though we did not see all of the content that is available, the alert that we did see was pretty entertaining and in no way felt like a simple beat ‘em up or tank and spank. Granny Goodness is a character that wills away heroes and villains, children and adults alike and brainwashes them, testing them to see if they are worthy to serve Darkseid. The tests that Granny Goodness puts the characters through are rough, and challenging, requiring teamwork. Failure to do this will not penalize you, but rather put you on a different path that involves fighting your way through more Parademons; those that complete them the “right” way will net a feat. 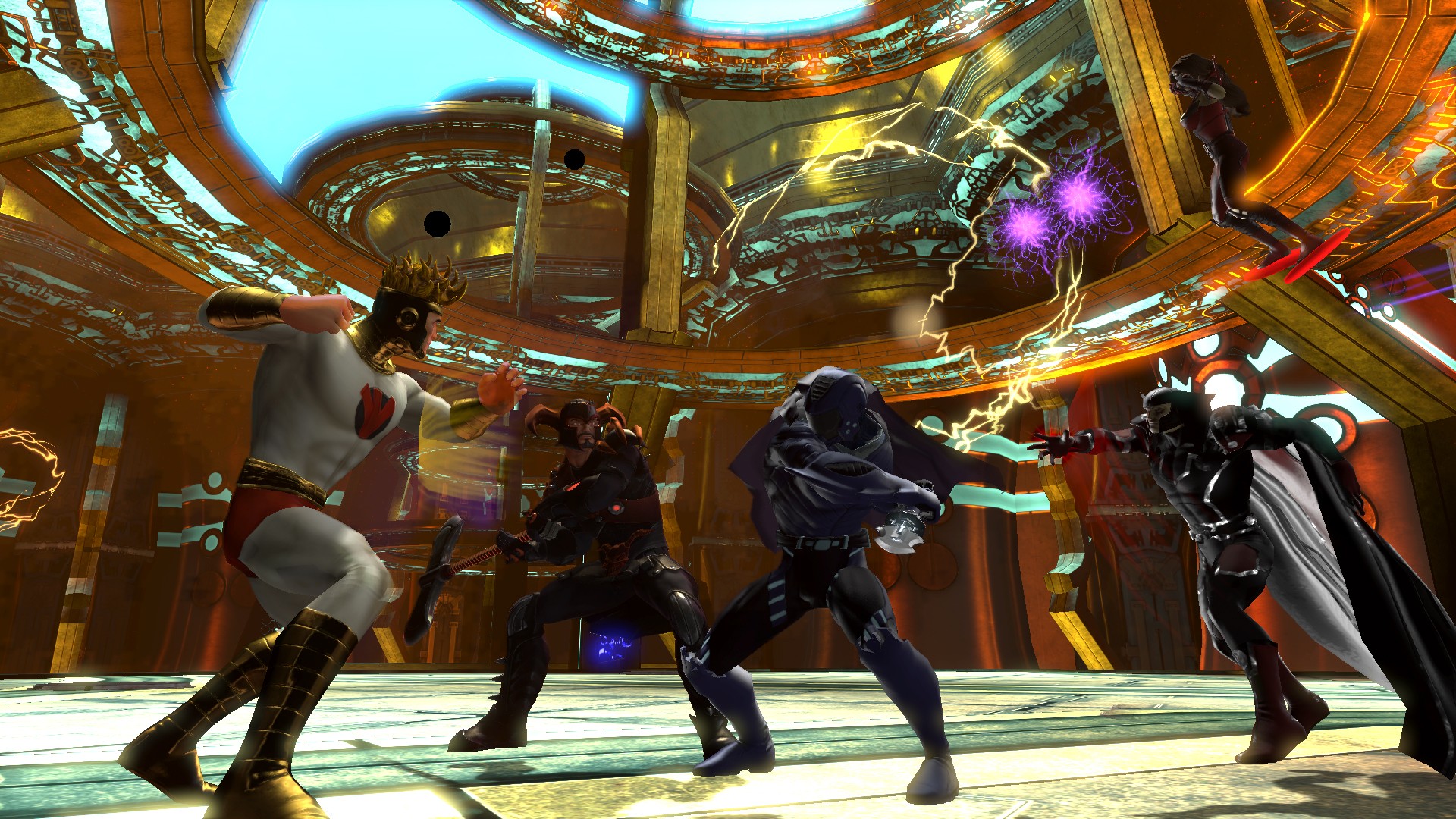 No matter your side, expect a rough fight.

This outcome is made visible in some of the content, where a brainwashed hero or villain is the focus of one of the battles. We saw Brainwashed Hawkgirl in action, but I also heard that villains like Weather Wizard can be in this fight! There are lots of new mechanics to be aware of, such as having to deactivate a special shield before being able to damage the brainwashed foe directly. Also expect the raid to feature a very popular, powerful DC character under the command of the forces of Apokolips!

Happiness Home is not the only place you visit though. The majority of the content takes place on New Genesis itself, as well as the home of the New Gods, Celestial City. There are plenty of solo missions to take part in, which is something new and interesting happening in Halls of Power II. Darkseid is invading New Genesis, led by his main general, Steppenwolf. Depending on whether you’re hero or villain aligned, your opponent will change to be Bugs, or the Parademons. You can do these missions daily, or you can use replay badges if you really want to do them again. There are lots of things to do: two duo missions, an alert for four players, as well as two eight person operations, an operation and raid to be exact. The “Loot Picker” comes into play here as well, offered in an earlier update. You can pick the pieces of gear you want from a list, and the harder the content, the better your choices are. This eliminates your fear of only getting one piece of gear that does you no good because you recently picked up something for that slot! Definitely a classy addition to the game.

Heroes and Villains alike get new equipment to show their style based on key characters introduced in this episode. Characters like Mister Miracle, Big Barda, Steppenwolf, and other yet revealed actors of Darkseid’s stage will be offering their fashion up to players with sufficient Hero Marks. These are not required by any stretch of the imagination, but if you like the style of gear you can go forth and gain them. I was worried full sets of gear wouldn’t be making the regular updates as a result of the faster content releases, but it seems we can expect around four pieces a month, a reasonable goal. Daily alerts give five marks, two for a daily duo, one for a daily solo, and ten for the weekly grind. So collecting all the sets before more are released isn’t impossible to do, but will certainly make collectors put work in to reach their goal. It wouldn’t be an MMO without a little work! 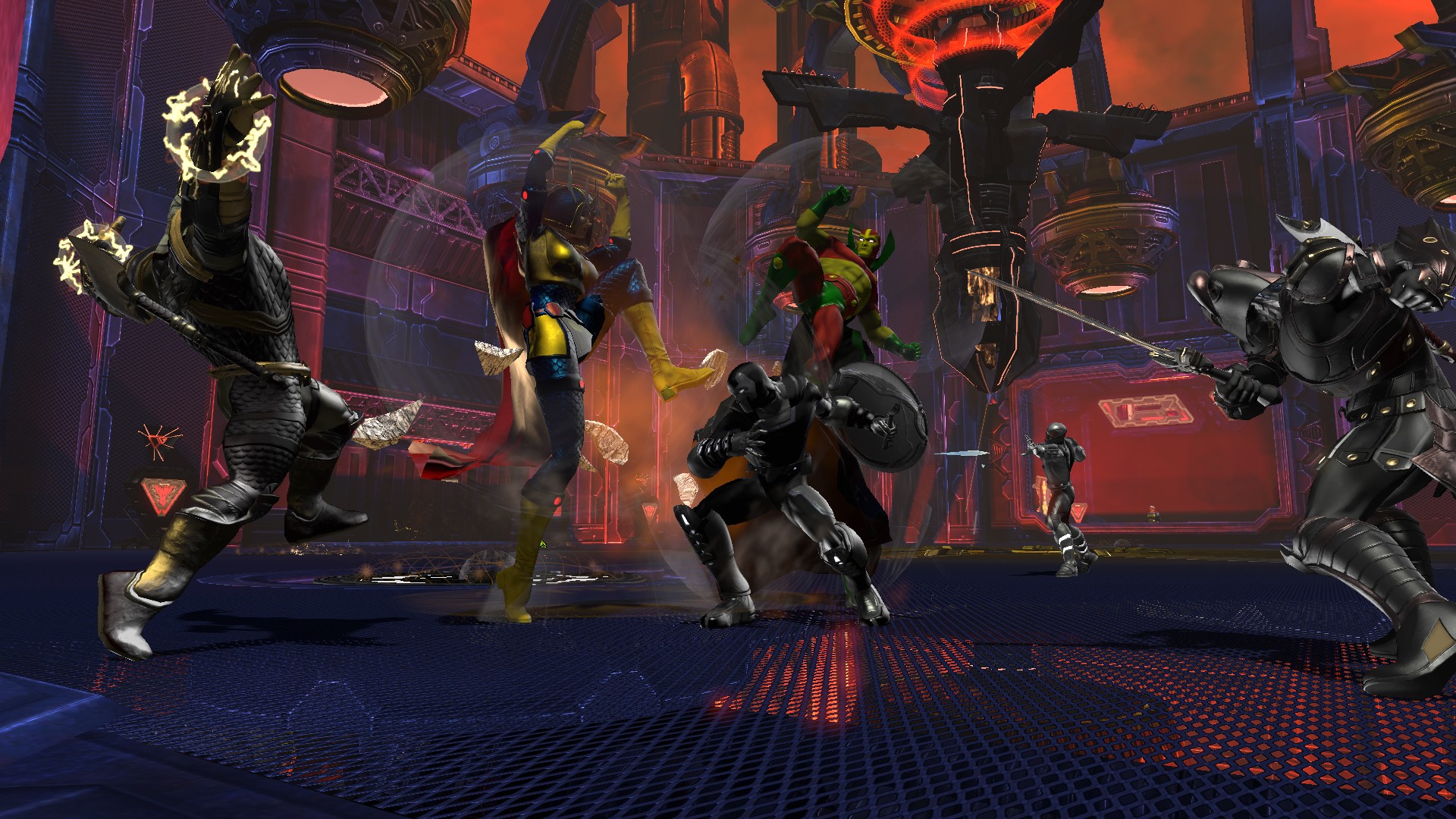 These boots were made for walking.

Another thing involving gear to look forward to are item affinities, which comes with rare gear. It will remind veteran players of “set pieces” that you might find in World of Warcraft or some other games. But, you are not forced into wearing certain pieces of gear to get them. You will be able to overlay item affinities of your choice onto whatever pieces of gear meet your fancy, which is pretty damn awesome. You are essentially building your own visual set featuring rare item stats, preventing the horrifying thought of a bunch of superhero and villain clones running around. You can also color these and even heroic pieces giving tons of customization to find a style that matches your vision of your hero.

Going Forward: Another Step in the Right Direction.

As I said before, I really feel like whatever behind the door decisions were made when SOE became Daybreak Games are paying dividends for the health of DC Universe Online and Everquest II. More is being done to listen to the audiences of these games that have faithfully followed for all these years. The notion that there will be monthly content instead of huge bundles of stuff every three months will be lovely as well, stretching the content out instead of simply hoping that the content will last three months, which is not always the case depending on the player. All told, I’m excited for what Daybreak is doing here, and I’m once again following DCUO faithfully. If they can deliver on their promise of more closely tying the game to its source material comics, one of my biggest complaints will fade away. It’s up to the developers now to deliver on the PR team’s promises! If Halls of Power II is any indicator, DCUO could definitely be an MMO returning to the spotlight.