News >
eSports Articles >
Hirez Roundup #25: I Asked For This Darkness

Hirez Roundup #25: I Asked For This Darkness 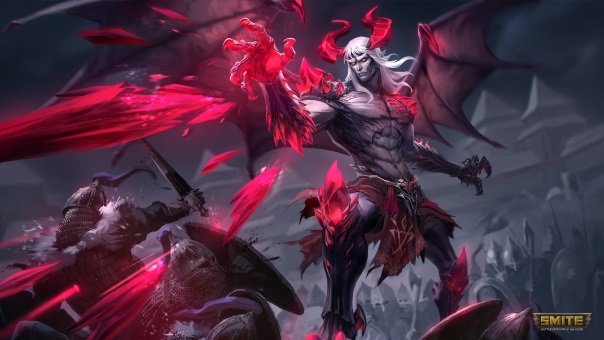 Hello Internet! This is a busy week for Smite! But before I focus on that, I do want to say “Congratulations” to Paladins for getting ready for their official launch. It’s been a really wild ride, and I’ll admit, when I first played it, I was not enamored with it. It took several updates and changes for me to really get into it. But it did happen, and I ultimately fell in love with Paladins. It’s had a weird trip with some really (really) unpopular decisions, but that’s the nature of a beta! You have to figure out what works, and what doesn’t work. Paladins Strike has also launched, and it’s another game I’m good at that’s live on the Internet – so get ready, nerds. There were a lot of announcements for Smite this week (though some of it is just “Watch LAN for more announcements – which is okay with me, I was going to watch anyway). We have the first Slavic god (Chernobog), and the announcement of Pele’ (Polynesian) and Baron Samedi (Voodoo). I just want to take a moment to say “I was right” about Baron Samedi though. There were lots of choices that could have been made, but the one I guessed was right. Because I’m the best. Around. Anyway, let’s talk about some SMITE patch notes today! 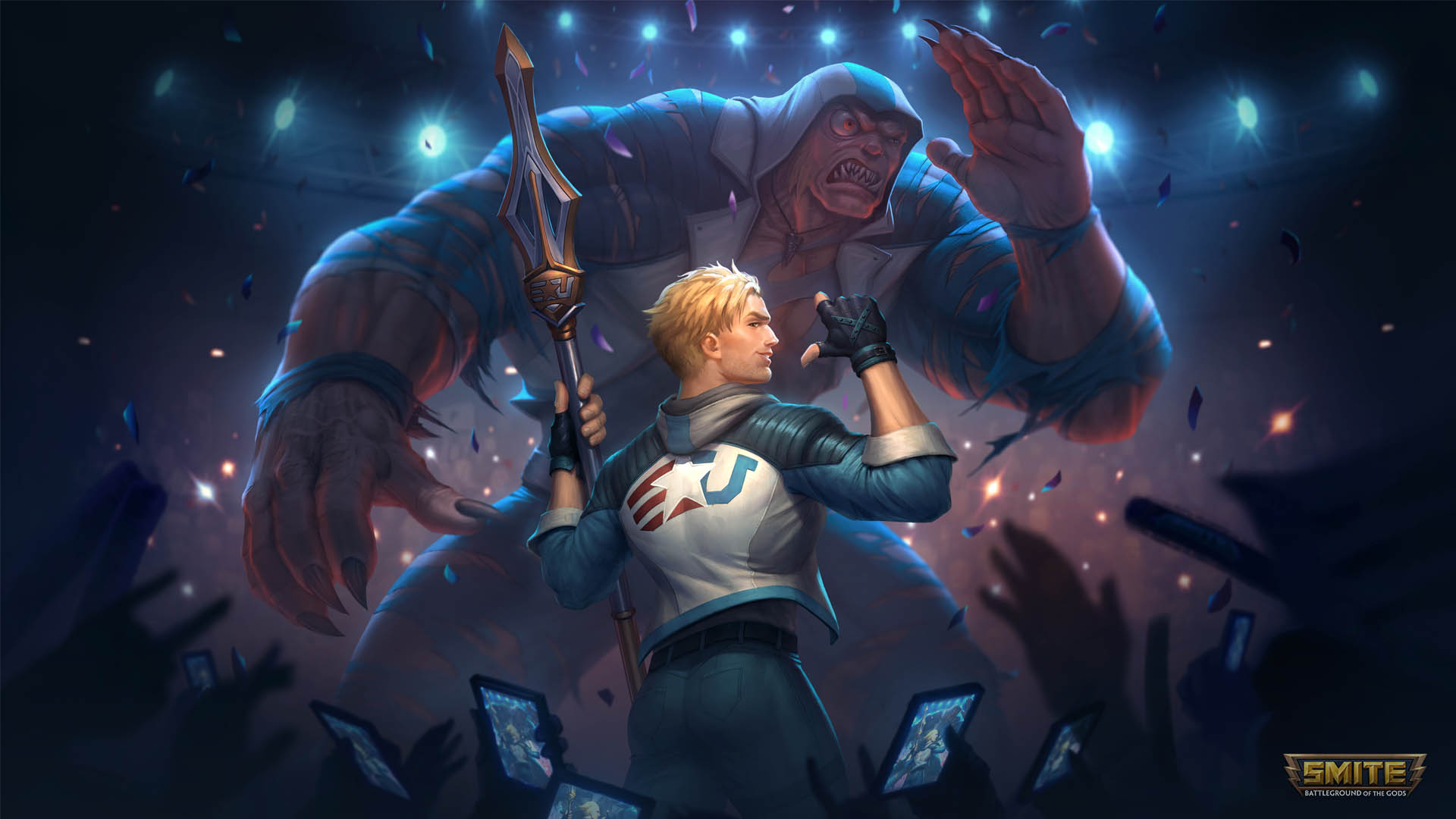 I love the VP for EU Cu Chu. It's funny and factual.

This is a really fascinating update for cosmetics: I appreciate a great deal the EUnited Cu Chulainn (But it should have been a Guardian imo), and the Benji/PBM duality is working. Well, a ripped Benji anyway. Next up is Chompy Chibi Fenrir, and while I don’t really play Fenrir (because I have self-respect), the little god-eater is adorable. Plus he has Puppet-Tyr’s hand in the splash art! The most important skin in this whole update though is Fat Loki Cabrakan. It’s a meme, a joke that’s gone on as long as I’ve been playing SMITE, and I sincerely appreciate it coming to life. Will this make me play Cabrakan? Eh, probably. Do I want the skin? You bet your ass I do. People keep saying Northern Ranger Hachiman is just Ullr, but I don’t really see it. I was definitely getting a LOTR vibe though and I’m digging it. Another interesting change is that Chernobog has his Mastery skins on the same patch he’s released. I’m so used to seeing them come in the second patch. Is this a change going forward? I missed about half of the patch notes, unfortunately. The clear winner this patch is “Fat Loki”.

The Divine Uprising Event is huge. It will be used to unveil three pantheons into the game – Slavic, Polynesian, and Voodoo. Now, the big complaint I’ve heard (from our livestream to Mixer chat) is that it is “too many pantheons at once”, alongside “What about the Celtic pantheon”? Another thing I heard frequently was “What about pantheon quests?” What about them? Do you really think Hirez is going to make a quest where you have to play as a Voodoo god, and there’s only one? That would be absolutely goddamn ridiculous. How about, instead of fretting that the world is over, let’s just be glad there’s going to be some new, exciting gods to play instead of more Greek/Roman/Chinese gods? The Celtic pantheon will get more gods, I promise.

Divine Uprising is Ragnarok. Hades’ plan is already in full swing, and the battleground of the gods will never be the same again. Bellona is doing what she can to hold back the darkness, but can she do it? The Underworld is on an upswing, and over nine patches, we’re going to see some incredible content, new gods, new pantheons, and so much more. It’s not going to be back to back to back, guys. This is patch 5.8, Voodoo is not until 5.11, and Polynesia is not until 5.14. So you’ve got some time between them for new potential gods for your favorite pantheons (if that’s the plan). You know what I’ve always thought was silly? Forcing a Pantheon to have one of each role. There’s no guideline that says that’s a must. Hell, most Greek gods are mages. So relax, just take it all in and relax. It’s going to be fine. But you know what is cool about Divine Uprising? A non-Odyssey T5 skin! Sure, you have to buy content to get it, but the skin is the ultimate reward for completing the Divine Uprising event and it’s a doozy. T5 Bellona! Divine Dragon Bellona will have a new way to transform too, having a unique form for each of her weapons. Unlocking all the items in each Pantheon Chest during the Divine Uprising event will reward her. They also hinted at some free gems during this event on patch notes. More info right here. 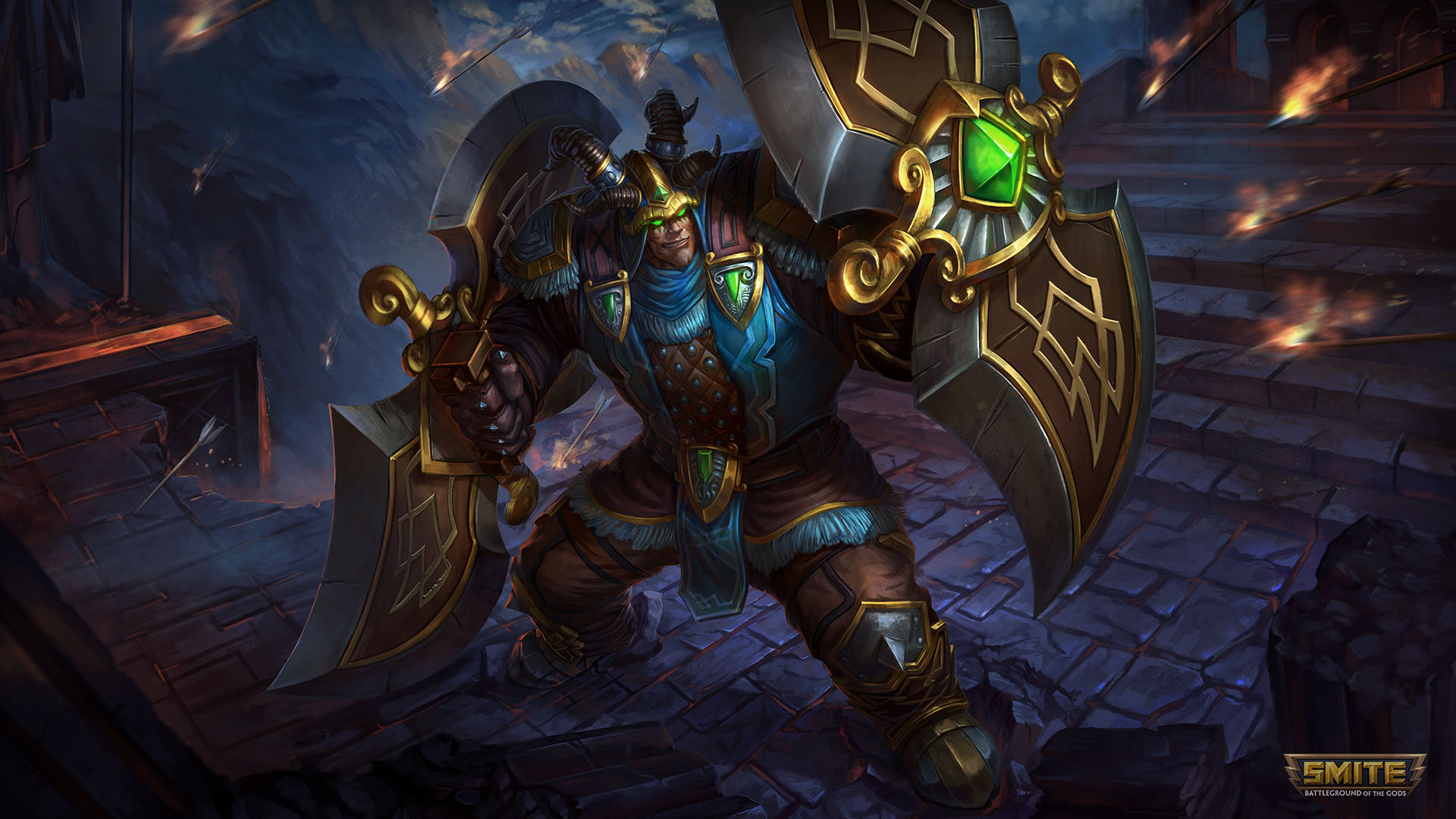 When did Loki bulk up so much?

Not much in the way of item balance this week, and that’s kind of a surprise! With a new Hunter on the way, I kind of expected all of the Hunter items to get re-tooled in some way. I suppose we’ll just have to see what happens for the next patch. However, I am glad to see Evolved Warrior’s Blessing see a hit to its power. It saw decreased protections gained from the evolved item (15 down to 10) because let’s face it, it was strong. It was lame and boring, so they spiced it up, but unfortunately, a little too much Cumin was added to the recipe. It was time to lower it. Soul Reaver‘s cost went up (2650 to 2750), as it’s purpose is to be a very powerful burst item, and it deserves a mighty cost. So suck it up, Mage Mains and buy it anyway! Stone of Fal has a new passive, and a lowered cost (2500 down to 2300). The passive was not terribly reliable and now reads, “Anytime you would be dealt more than 20% of your Max Health by a single Magical ability, that damage is instead reduced by 10%. This effect has no cooldown”. This is definitely a resource versus some of those Mages that can explode your health bar into tiny pieces with one hit. It’s so upsetting to watch it happen to you, so kudos. Last but not least, Oni Hunter’s Garb, an item I found myself buying pretty often has a new passive. It wasn’t always efficient, but I enjoyed it anyway. The new passive reads, “For each enemy god within 55 units of you, you gain a stack of 2% damage mitigation. This caps at 3 stacks”. It’s not as “much” damage mitigation, but will still be very solid during team fight phases. Not so great when it’s 1v1, but when it’s 1v3/3v3? It’ll shine like gold.

There are lots of things to look at in the god balance, but I’m not going to get into all of them. What could be the most important update: Xbalanque mains can finally stop whining that people are “stealing the kills they need”. Yes,  I know what your passive does. But also yes, I needed that kill on Ares far more than you did. Dead of Night now stacks off of damage dealt to players instead of kills. Every 1,000 damage dealt will give a stack. Rising Jaguar also received a decreased Mana Cost (60/70/80/90/100 to 60/65/70/75/80). Guan Yu also saw some pretty nice quality-of-life changes, mainly to his Basic Attacks. The third hit now cleaves, the last hit has an increased range (12 to 16), and the first two hits stay the same. His basic attacks did definitely feel off, and I like that it will now cleave as it should have since the start. In addition, Painless stacks now only reset when out of combat, rather than when being consumed by a single ability. This will let him stay in prolonged fights without having to stress about using a power and wasting Painless. I’m glad for Guan Yu mains, but more for me, because he’s my go-to in the solo lane. Khepri‘s Solar Flare has an Increased Root Duration (1.3/1.4/1.5/1.6/1.7s to 1.5/1.6/1.7/1.8/1.9s) and Increased Damage (50/100/150/200/250 to 60/115/170/225/280). Mmm. Delicious Khepri buffs. Also, Aphrodite has less management for her Kiss (3s down to 1s when hitting an ally). 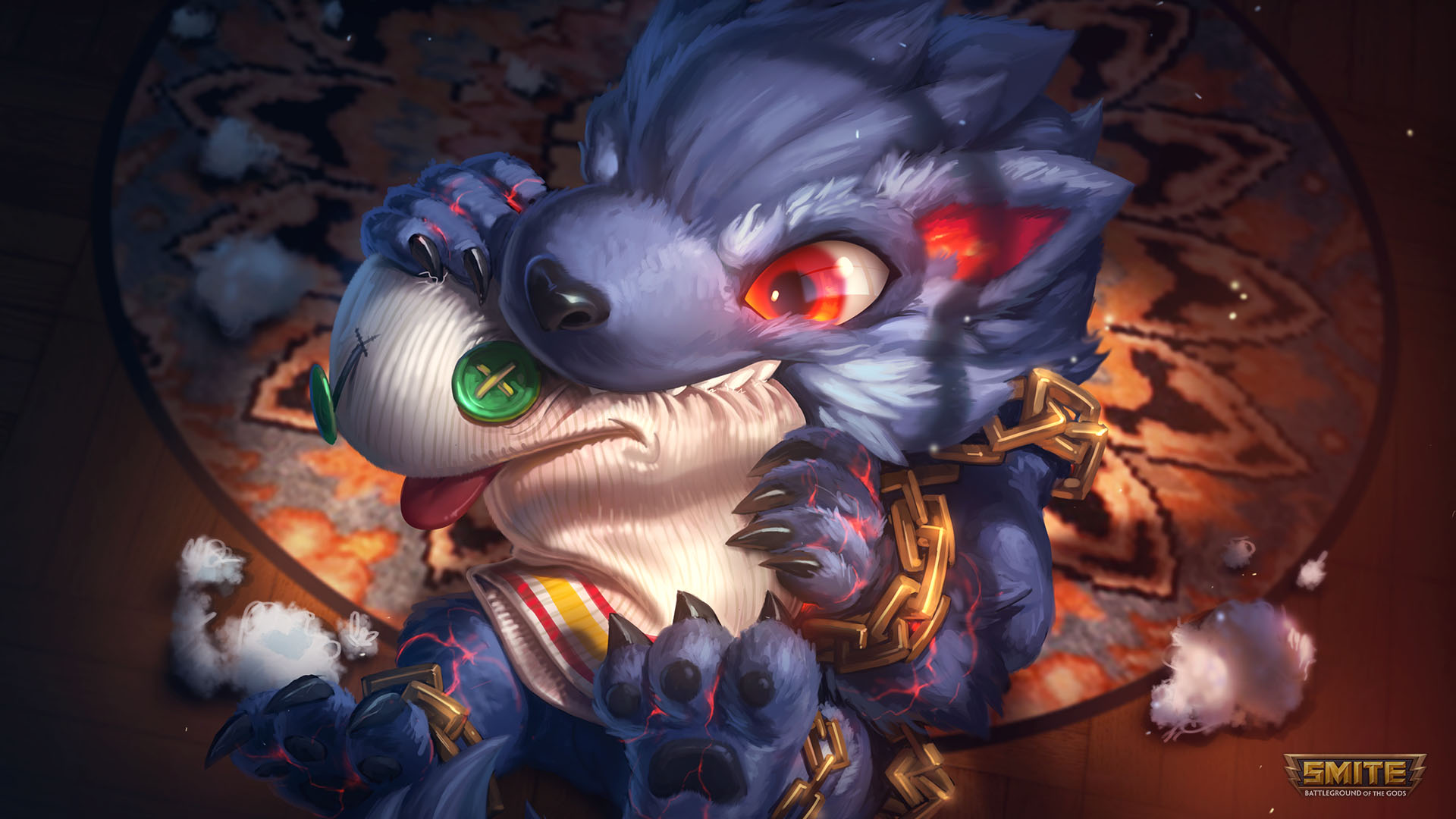 He is the best doggo. Except maybe Cerberus. And Anubis. You know what? They're all good doggos.

Let’s look at a few nerfs though because that’s what we all really love, right? No? Just me? Well, okay. Achilles, we hardly knew ye. Shield of Achilles‘s impressive damage went down, lowering the damage to targets in the outer cone (80% down to 70%), and Combat Dodge saw a Damage Decrease (65/105/145/185/225 to 55/95/135/175/215). Come on, this was necessary and you know it. Achilles is still more than sufficient in whatever role/lane he’s in. Another exciting nerf is to Nemesis, with Slice And Dice saw some damage loss (50/80/110/140/170 to 40/70/100/130/160). This should put her in line with some of the other junglers, having less of a significant advantage in her clear time. Terra also saw some nerfs because she’s been very powerful with her Monolith. It’s now easier to break (5 down to 3 hits), and Earthen Fury proved to be incredibly strong, which we probably would not know until it actually saw some in-game play by regular players/pros. It saw some Decreased Damage Mitigation (10% down to 5%) and Decreased Damage Amplification (10% down to 5%). That was nuts anyway with certain other abilities/items. If I missed your favorite, fear not, they’re still on patch notes.

Other fun bits: Thor saw a buff to Mjolnir’s Attunement, Vamana’s saw decreased mana costs all across the board, and Kuzenbo was balanced a bit on his Shell Spikes (decreased damage reflected/mana/decreases cd of Sumo Slam/NeNe Kappa by the same amount), and Water Bowl has more Damage Reduction per stack.

I’m not going to talk about Chernobog too much, because I’m going to be reviewing him next week – just stay tuned for a more in-depth look at him. Now, I know what everyone is saying, I do read Patch Notes chat. “Oh wah, he’s so OP! He can become untargetable! It’s so unfair! He has a combo! So many Hunters have combos! His ultimate is unfair and op! Waaaaaaah!” I’ve never heard such crying before. Is his Ultimate crazy? Yeah. But it doesn’t deal damage. He has to leap down to an enemy, he can’t just start backdooring for free. It does reset his cooldowns so he can fight when he lands, but I like the idea of a Hunter not having a crazy damage ultimate. Instead, it has tactical purposes – you can reveal enemies and what they’re doing, relay it to the team, and leap down to save someone who needs it. A Hunter who has a move that’s not greedy? How dare them! Come on, friends, don’t be so shortsighted. Chernobog isn’t! Come on, that was funny. Into Darkness is a great escape/reposition because it lets him leap into a wall and be untargetable. Fantastic. If you see him dashing, you know what a good Ymir/Cab/Terra is going to do? Throw up a wall and trap him there instead! It’s not lightning fast. He has a cool combo, a unique kit, and though I don’t play Hunters much, I really want to play Chernobog. I’m already contemplating fun team-based things to do with him. So one of his powers has something in common with The Morrigan. Big deal. It works on him and I like it. Next week: In-depth with Chernobog!