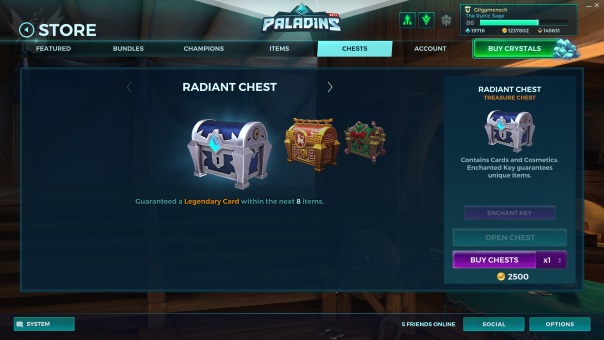 Next week, I promise I’ll have some non-Hirez related content for you guys! But I still had some stuff to cover today and things I want to talk about. Specifically some brief HOTG thoughts, Paladins TDM, but nothing really on the SMITE front! You’ll have to wait til tomorrow when I go in on Cerberus. In SMITE’s place will be some chatter about Hirez Mobile games, Bot Smashers and Paladins Strike! So, this one promises to actually be a little shorter. I say that every week now, don’t I? Let’s get going!

Hand of the Gods: Smite Tactics: Get Out of the Comfort Zone!

So, as I was watching the HOTG Founder’s Finals, I did notice something, other than it was pretty much a stomp (not counting one pretty amazing comeback around ~2 health). I was noticing that despite my comfort zone of Control/Tempo decks, that didn’t seem to be working so well for most people I saw playing. And if you want to be skilled at a tactics-based game, one of the biggest bits of advice I can give you is: Get out of your comfort zone. Is it fine to specialize in a deck style? Absolutely. There’s nothing wrong in having a preference. But if you really want to win, you better be able to play a variety of decks. I learned so very much simply by watching them, and I highly recommend interested parties doing the same. There are so many good cards and incredible combinations. 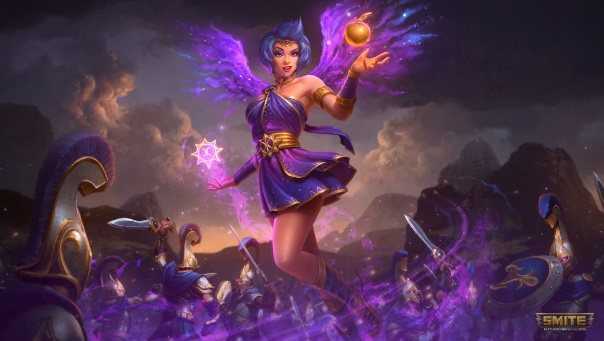 I’m sure there’s a tier-list of effective, easy decks to climb/win with, but I wouldn’t rest on those laurels either. I cannot stress enough how important it is to at least try every single deck archetype. A prime example is this: I am awful at drafting. I suck at drafting in almost every card game I play because I have particular deck-types I lean on. I want to play control because it’s what is most fun to me. So I try to build those complicated, ridiculous control/mid-range/late decks, and it virtually never works. You have to learn in order to grow and get better. That’s my biggest weakness in CCGs because I can play aggro decks, but I don’t often enough. This Founder’s Tournament was a sort of wake-up call for me, to try and master new ways to play so I can grow and maybe enter some tournaments this year. That’s another piece of advice: Enter the tournaments. Seriously. Even if you aren’t ready. You’ll see some amazing decks and strategies that will help you grow as a player if you’re willing to learn and willing to pay attention. Record matches, watch them back, ask better players, or players you perceive as better. Are you mad that Zeus Apollo Buff wins over you so many times, or that you get overwhelmed by god-heavy Bellona decks? Then play them too! Get in there and see what makes them tick. Count on a lot more HOTG content from me this year, as I begin my journey anew.

It is my sincere hope that you will give it a try as well, develop your own strategies, and get into these tournaments over the year. It’s a new year, a fresh game, and there’s still a lot coming in terms of cards, gods, and game modes. It’s not suffering the power-creep that I see in other particular card/strategy games of this type, and that puts it at the absolute top of my strategy list. And that even puts it over the forthcoming MTG: Arena, because at its core, it’s still Magic, and still a deep money sink with a ludicrous level of power-creep.

Hirez showed off two fun Mobile Games here at HRX 2018, one of which I had already played, and one that was new but familiar at the same time. I’ve reviewed/talked about Paladins Strike before, so I’ll keep it simple. I was fortunate enough to get into the early Alpha with the Australian client and played the absolute hell out of it. I’m not certain if it will run on my present/temporary phone, while I get my actual phone repaired, but we’ll just have to see when possible. But that in no way changes that a top-down shooter style Paladins was an absolute blast. The summon/moba mode was also different. Once I have access to it again I want to try and stream it, since I should have the software to make that happen now.

I was so good at Paladins Strike...

But Bot Smashers is definitely new. One of the things I really enjoyed about it, is it doesn’t appear to be tied to any of their existing IPs (not that I noticed anyway, except maybe Bomb King’s bombs in some of the promo art?). But this is another nice, simple, easy-to-learn/hard-to-master mobile title. It’s an RTS, where you build a small base with the goal of destroying an opponent on the other side of the field. At this moment there are several different types of units, the tanky-drill robot, a crew of jets to drop bombs, infantry robots, a single powerful jet robot, and more. The downside now is that once you’ve set a unit on a path, you cannot change it. It’s set in stone, they might do something after. But it’s  in Alpha, so that will no doubt change. Or can, anyway. As the game goes on, you gain points for blowing up the other side’s buildings and will be able to upgrade your own buildings, either getting more units for a crew or making them stronger.  You can signup at this link, and I highly recommend doing so. It’s a fun distraction. Plus you can #playwhileyoupoop.

I was nervous when I saw that TDM in Paladins was going to be in the “Unbound” list. But it did motivate me to open all of my chests. I already had a few champs with really solid decks, but I stand by “skill beats card levels”. We played TDM for about two hours last night, maybe longer, and won far more than we lost. Most of them, if I’m being totally honest, were stomps. I’m sad that the matches don’t show up on Paladins.guru or in my History in-game. So there’s no proof other than the stream itself. But the match is very simple. It’s going to be less than ten minutes, the queue times are very fast (~2 minutes at the longest), and the goal is to get to 40 kills first. No objectives (you know people don’t even know what those are, anyway), just killing. Do you need a regular team comp to win? Nah, we got steamrolled by a triple flank comp. It works, especially in the base map. 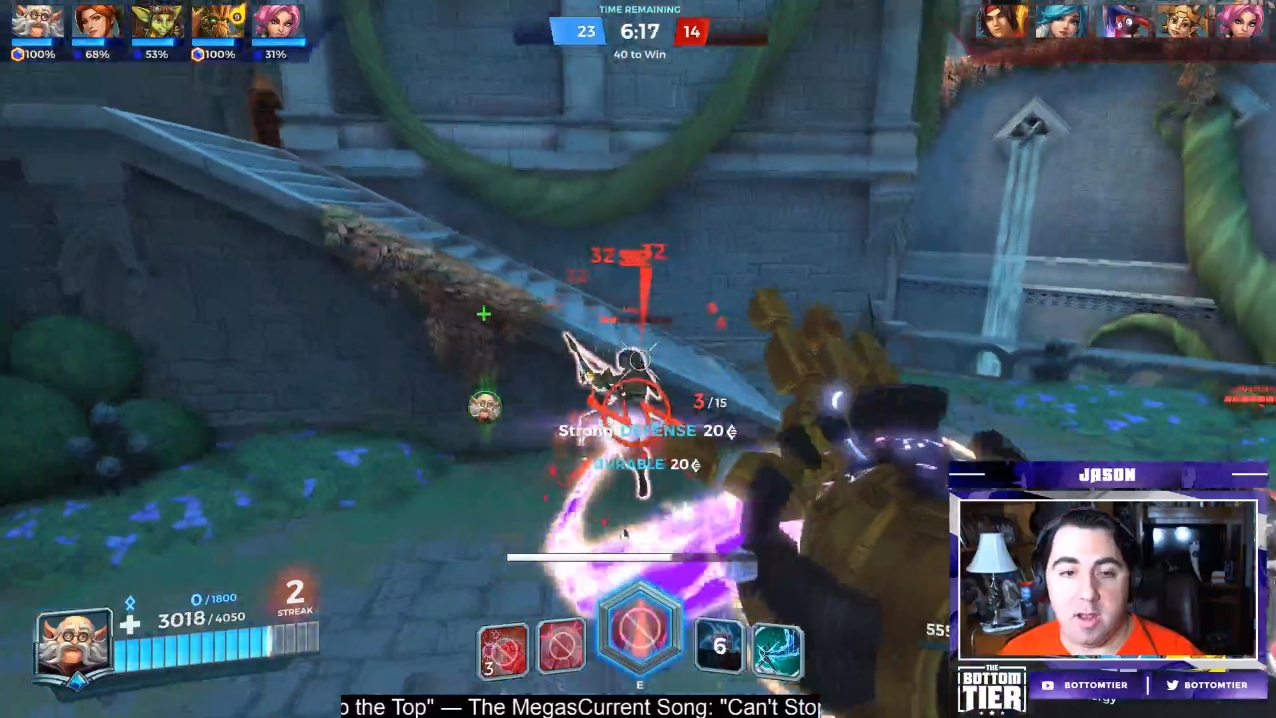 I do think that “team comps” win far more frequently, but janky weird stuff does succeed too. Paladins‘ TDM is far, far more successful already than Payload. Because let’s face it: Payload took forever, it was boring, and I don’t know a single person that willingly queued up for it. It’s Siege, but longer, and you have to wait your turn to push. That. Was. Awful. It was a cool idea, and it might work in other games, but if I don’t have to play that dreck, I’m not going to. Another bonus is that if you’re frustrated that your Ranked matches aren’t going the way you intend them to, you can always play a few TDM matches, get your head back on straight, then jump back into the competitive action again. Will there be a Ranked TDM? I think it could be a great side-show at LANs/tournaments, and would no doubt just be some fast, frenetic, crazy fun to see which team can out-shoot the other with no real meta attached. But … will we see a TDM meta? Now that’s going to be an interesting thing to find out. It’s fun, it’s quick, it’s nutty, it’s TDM. I think it could really pull in the Halo/CoD crowd to check out a really fun F2P shooter, in Paladins. It’s a smart move.