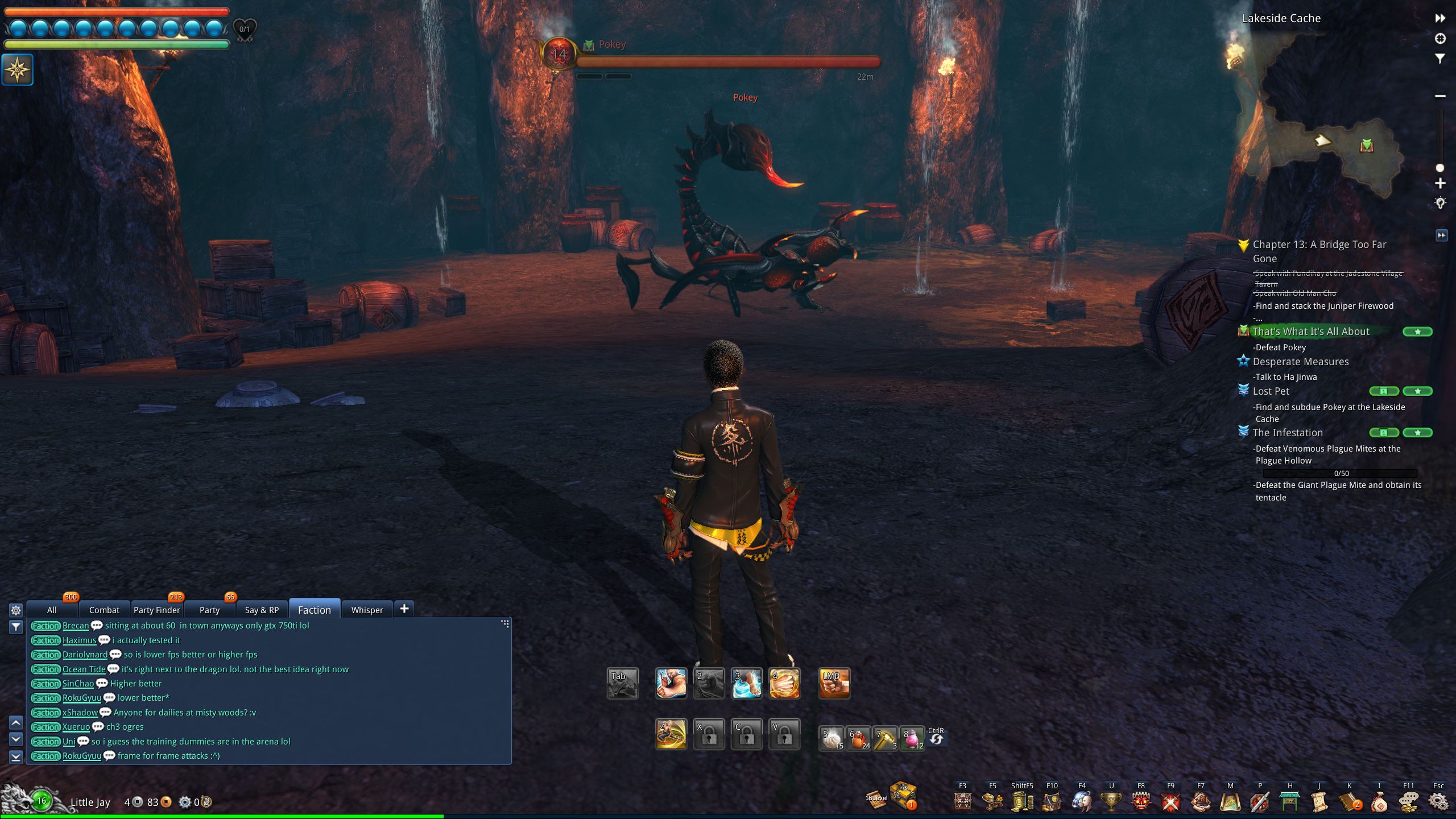 Welcome back, martial-arts masters. Now that the second closed beta for Blade & Soul has come and gone, it’s time to showcase my adventures in the world of Blade & Soul once again. This time we’ll be focusing on some of the low-to-mid level PvE challenges that are available.

Arriving in the town of Jadestone Village as my kung-fu master, this area opens up many new events that can be experienced within a short amount of time. Most notably: One of the more engaging instances that new players will come across in a cave called Lakeside Cache, featuring a boss fight with a giant Scorpion named “Pokey”, a.k.a the Noob Killer.

Legend has it that if a new player is able to defeat Pokey all by themselves on their first try, they are destined to become one of the greatest fighters who ever lived. That was a challenge I was willing to take…

But in all seriousness, Pokey is a fairly formidable boss fight for beginners, as this opponent throws several telegraphed and non-telegraphed attacks at the player, as well as different mobs to face midway during the battle. While this boss fight can be experienced with a party, defeating it solo is possible and much more satisfying.

So without further ado: It’s time to FIGHT. 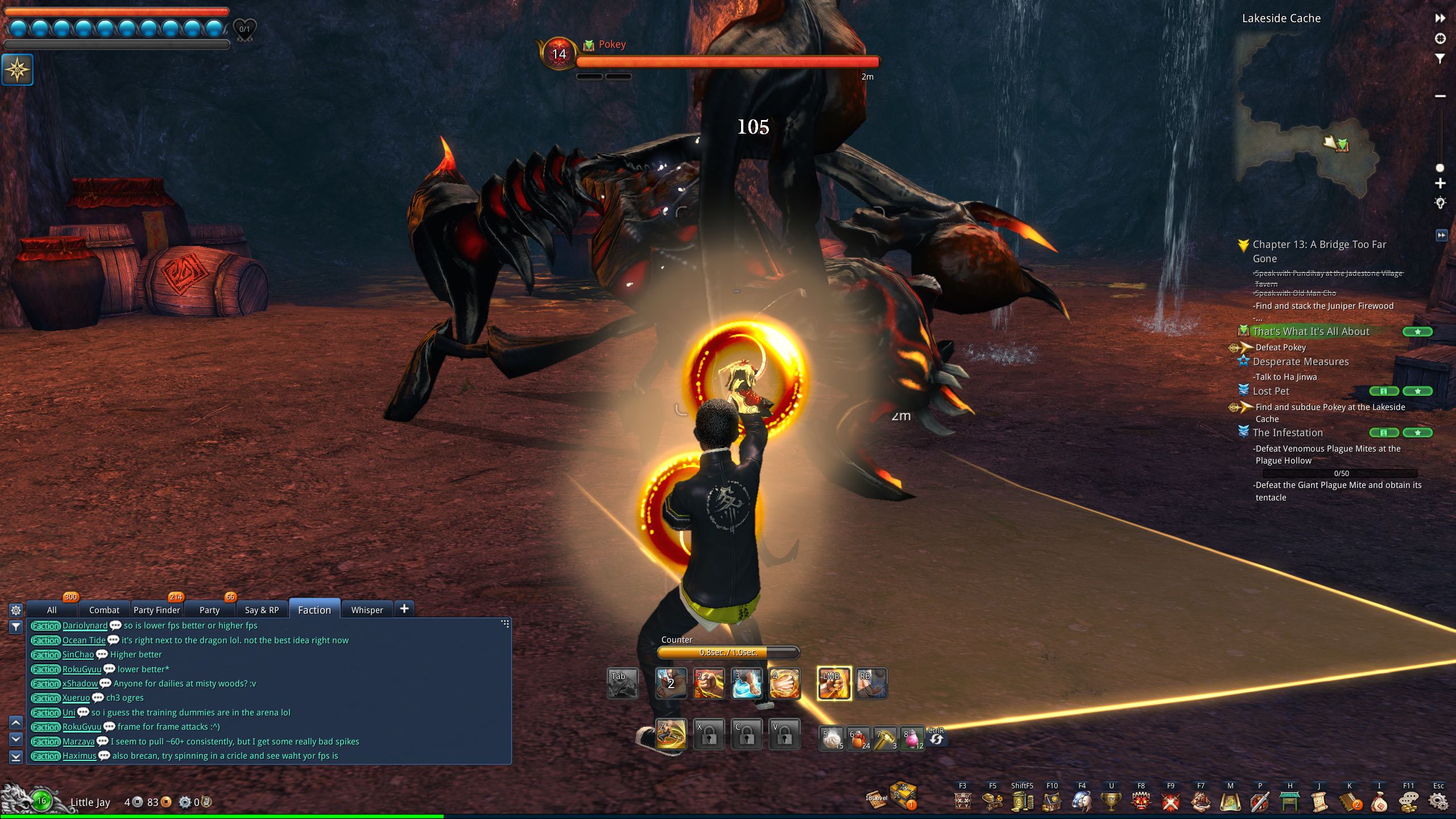 As the battle started, facing Pokey and its attacks were fairly easy for me to handle, as Kung-Fu Masters are equipped with a counter attack, two evasive sidesteps and a back dash in order avoid taking damage. Utilizing the explosive fist attack mixed with some animation cancelling, I was able to twiddle down the creature’s HP well enough.

That was until the young scorpions were thrown into the mix… 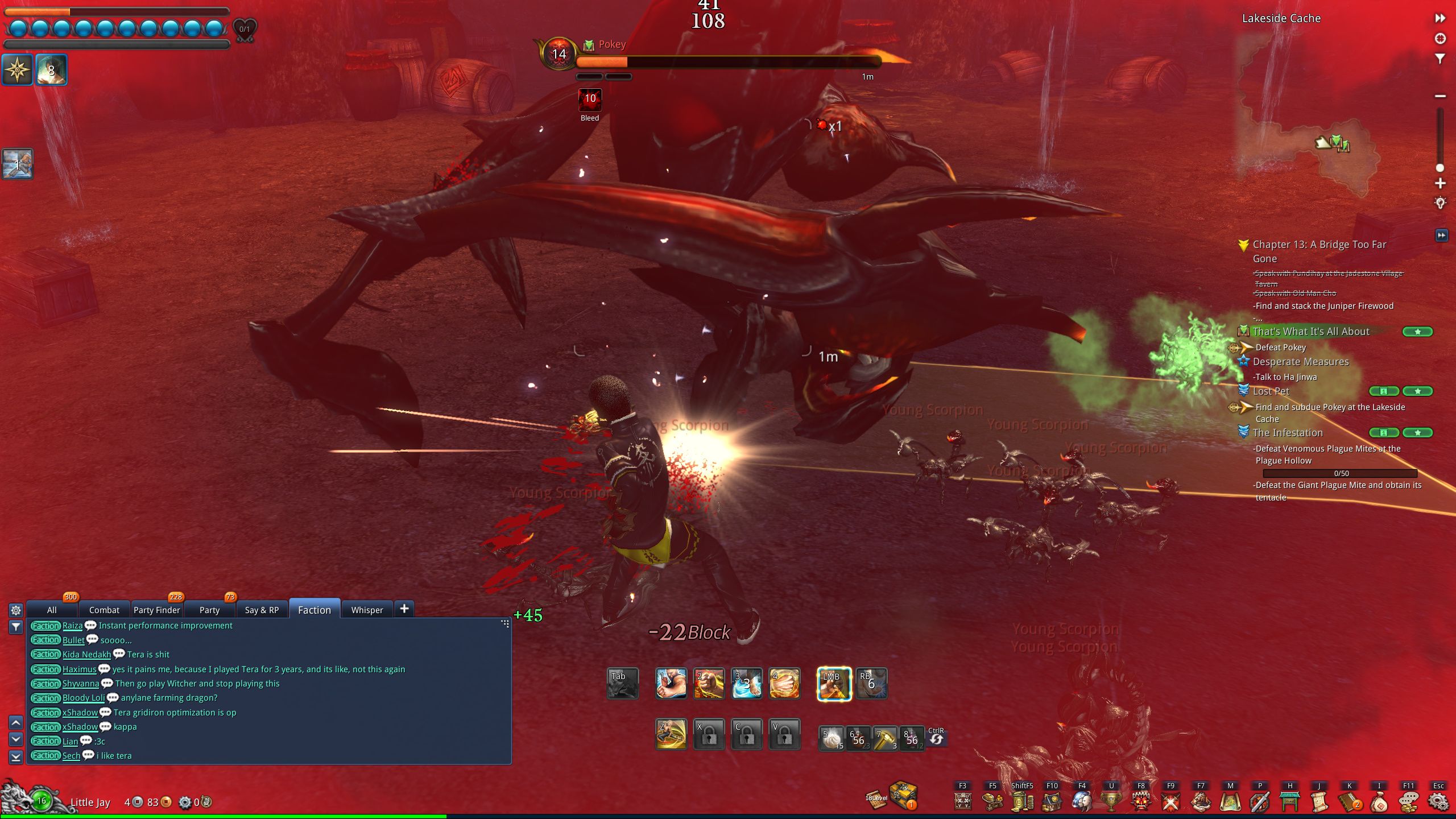 Don't mind the red screen; the situation is clearly under control.

It was very difficult for me to deal with the young scorpions during the fight, since I was too focused on the main boss, I didn’t have enough time to destroy the eggs the hatch the scorpions. So now I was dealing with Pokey and a bunch of baby pokeys at the same time, which was a pain to deal with, as Kung-Fu Masters are not well equipped to handle multiple enemies at once. Still, I managed to kill them all off, but not before having nearly all of my health drained from me. 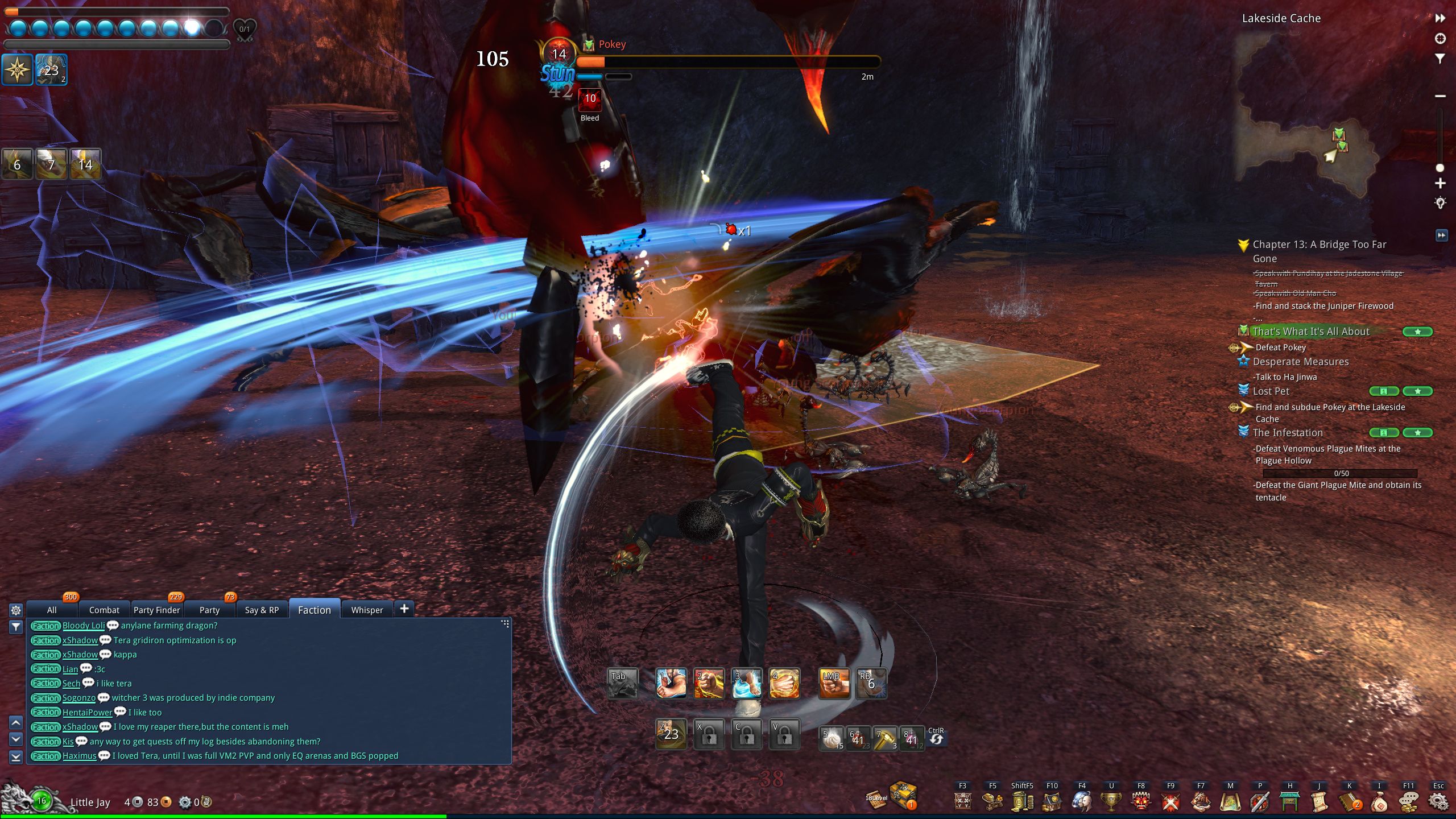 When in doubt, breakdance your way out.

After drinking a potion during the fight and hanging on for dear life, I managed to strike one final blow on Pokey and came up victorious, and as my reward, I was given a piece of its Soul Shield, along with some coins, potions and a key used for unlocking equipment boxes.

It was a very fun and engaging boss to solo. I enjoyed it so much that I decided to retry the fight several times, which seemed like a good idea at the time, in order to collect more soul shield pieces. Getting a full soul shield set, however, was a fairly dull and frustrating endeavor since item drops are all random, so I had to settle for having a 5 piece set instead of a full 8 piece.

Pushing on into the wilderness, I managed to reach the Songshu Isle in order to complete the Dusk Adder’s Nest instance, a hideout for a ruthless gang. This time, I decided to give the group finder system a try. This system allows players to set up a private or open group for other players to join. It can even be used to connect with players from different servers, which is a nice and welcome feature compared to most other F2P MMOs, especially during beta.

Within a few minutes, I was able to find a full party in order to take on the instance, thanks to the game’s combat and class role structure. Due the lack of dedicated DPS, healers and tanks, players won’t have to worry about their team compositions so much and players won’t have to call off their dungeon runs for the night because their guild-appointed healer didn’t show up. Just grab your friends and get into the fray. 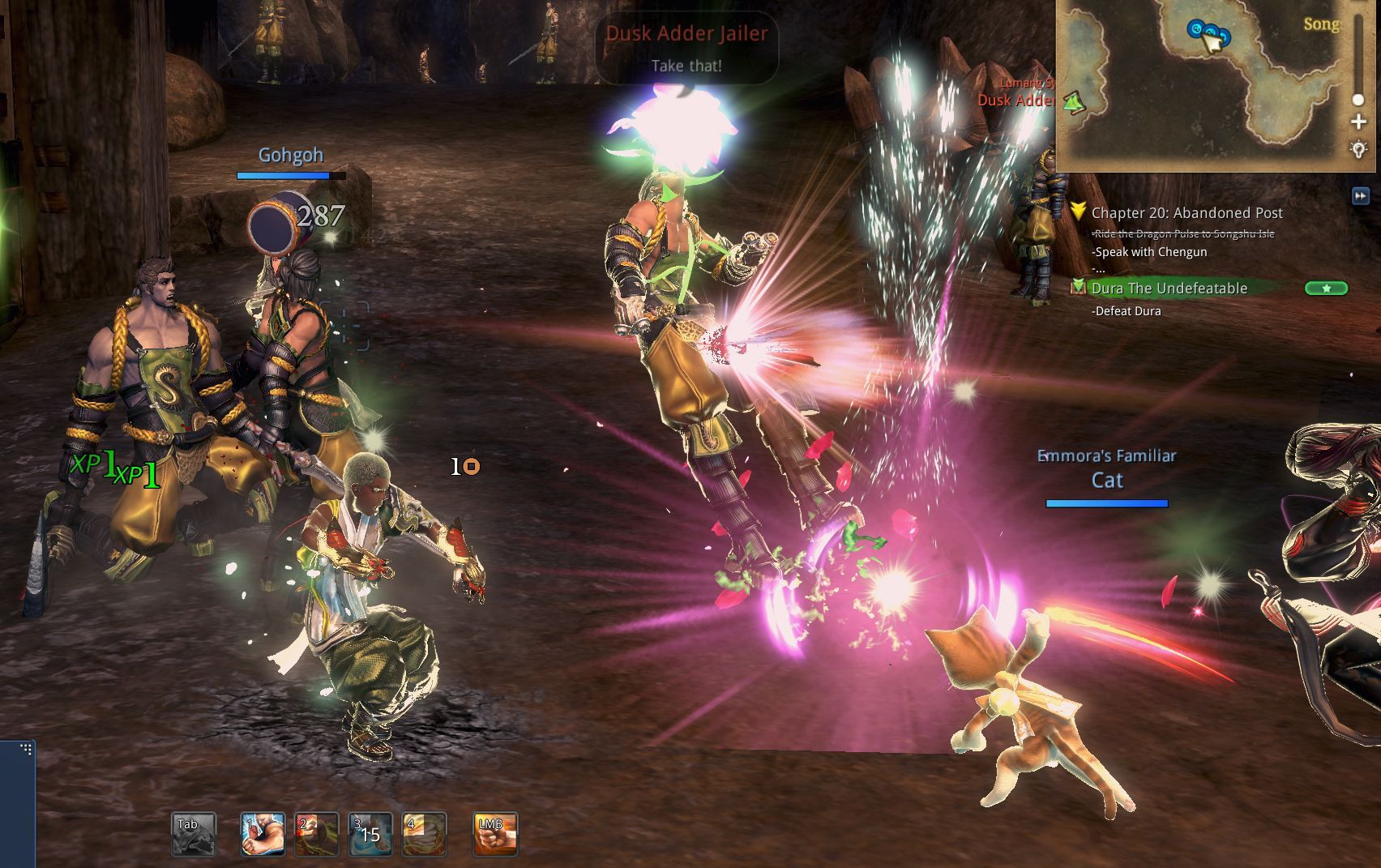 The gon on the left falls to his knees in shock as a glowing flower explodes from his comrade's head.

However, because of the lack of holy trinity, some players may disconnect in team play, as most of the early instances amount to beating up a bunch of guys in one room before moving to the next one. With a limited set of support skills that directly help other teammates and each class having access to skills that restore their own HP, each player, for the most part, is responsible for protecting their own hide.

Personally, I was fine with this structure as it made these instances feel more like an arcade style beat ‘em up, which is what I assume is what the developers were going for. Still, some unique mechanics and more emphasis on supporting teammates would be nice, and I do suspect that these kinds of encounters will be seen much later on in the game.

Last up, I visited the first true dungeon of the game: the Blackram Narrows, a giant pirate grotto which is home to the Blackram Marauders, one of the rival gangs that you can actually “join” up with early on in the game (we’ll talk more about this in the next beta test.) Once again, I fired up the Group Finder and was able to find a fully-fledged group within minutes.

Now here is where things got a little bit more interesting compared to the last instance, as the enemies were a lot tougher than before, so me and my party members had to focus on synchronizing our CC abilities together in order to takedown the stronger foes. As one player can initiate a team-up attack by performing a single stun, knockdown, knockback, etc. on the enemy, and once performed, a single outline/after image can be seen of the enemy getting knocked down. It will be up to one or more party members to perform that same CC ability in order to disable the opponent.

This mechanic, while fairly simple, does help to reinforce the importance of teammates in certain situations. Not to mention that activating a team-up CC so you can witness a kung-fu master pin a giant monster to the ground or watching a Gon Destroyer lift up a beast that’s three times their size while their teammates wail on the beast is truly a sight to behold. 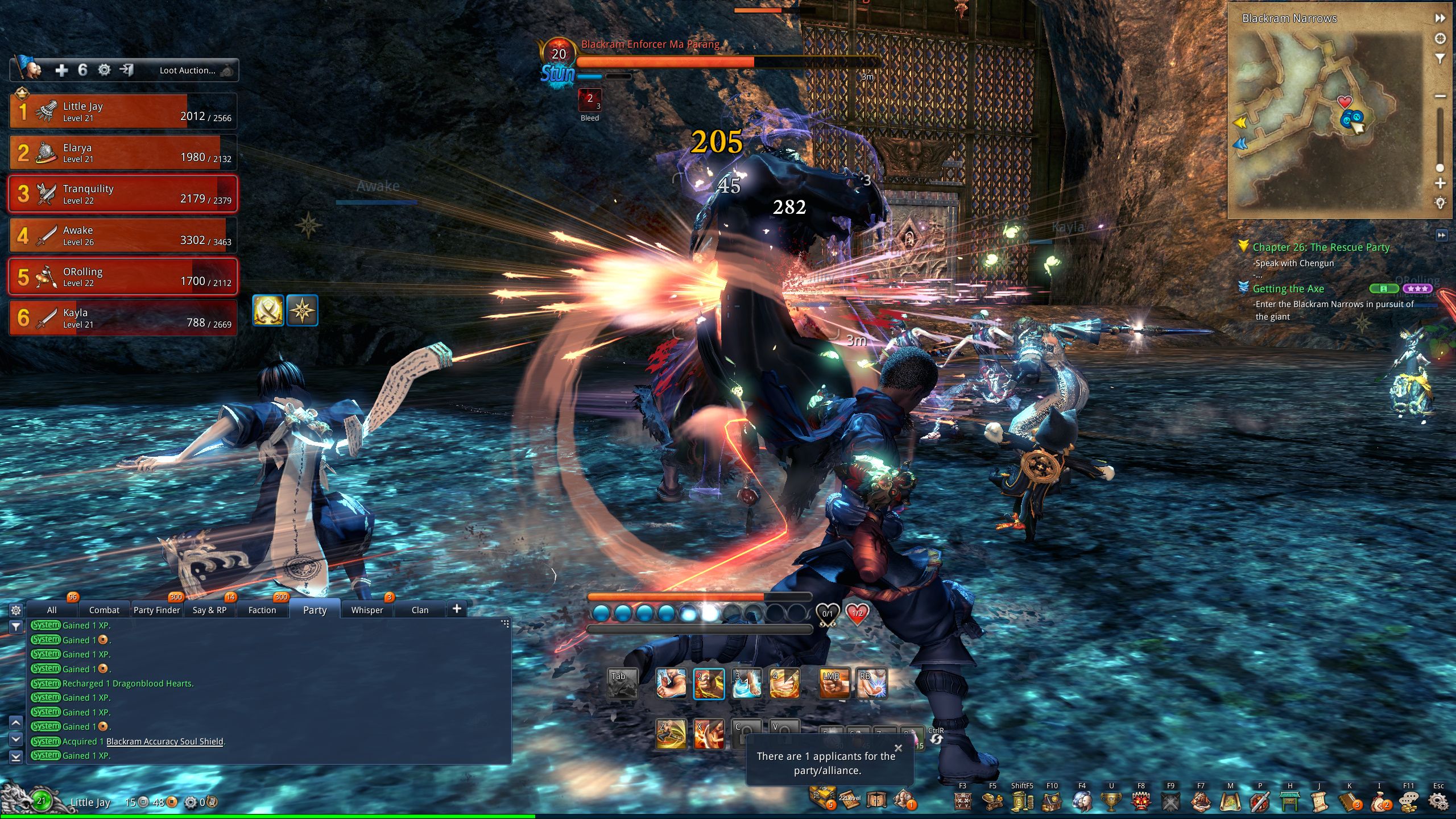 The bigger they are, the more useful your party synergy becomes.

Another unique feature regarding party play is how dungeon looting works. Instead of a traditional dungeon looting system where you simply select “Need or Greed” and let Lady Luck decide if you deserve that dungeon gear you’ve always wanted, Blade & Soul instead features an auction system where players can use their in-game currency in order to bid on items they want. Players can choose to bid as much in-game money as they have on a single item against other players in their team, or simply choose to opt out of the bidding for that single item. Once the timer counts down and the highest bid has been placed, the highest bidder wins the item and everyone else that placed a bid will receive a divided amount of in-game currency from that bidder, and this repeats until every item has been either been passed or distributed.

At first, I thought to myself: “This looting system is pretty damn cool and unique! Why haven’t more MMORPGs tried something like this?”

But then I really took the time to think about all the negative side effects of this system, such as the fact that the auction system is considerably slower to use, as it requires players to pay attention to the current price of each bid so as not to overbid or pass on an item they may want. There’s also the possible issue of players getting into a bidding war with each other, which could prolong the looting even further and make pick-up group runs a bit more chaotic for all the wrong reasons. Lastly, a really rich player could possibly overbid on every single item, and while the party members will get a cut of all that dough, it still puts a damper on item progression considerably, and with the option to buy gold directly in-game using real money, this could be seen as a form of paying to win.

With all things considered, I ended my thoughts simply by stating “Oh… yeah, well I guess that’s why this hasn’t been done before in other MMORPGs…” 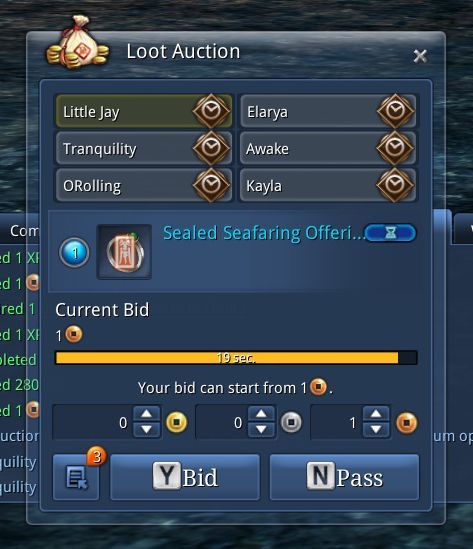 Good concept, its just not quite there.

Moving on, however, fighting in the Blackram Narrows was still a fun and enjoyable experience, as I got to experience a two-part boss fight against one of Jinsoyun’s bodyguards: Gubong. Fighting him in his human form was no problem, but once he transformed into the fat tub of lard known as The Devourer, things got more interesting. Players needed to dodge huge AOE attacks and dark chi attacks occasionally during the fight, but since I was a playing like a boss myself, I simply sidestepped most of The Devourer’s big attacks while keeping my attacks focused on him. I rarely missed a beat and the feeling was pretty satisfying.

Overall, my time spent with the early PvE content in Blade & Soul was enjoyable despite some issues here and there. The team dynamics of B&S are very unique compared to every other MMORPG out there, but they’re not without a few flaws, and the bidding system is also unique and interesting, but some may see it as more of a bane than a boon for dungeon runs. 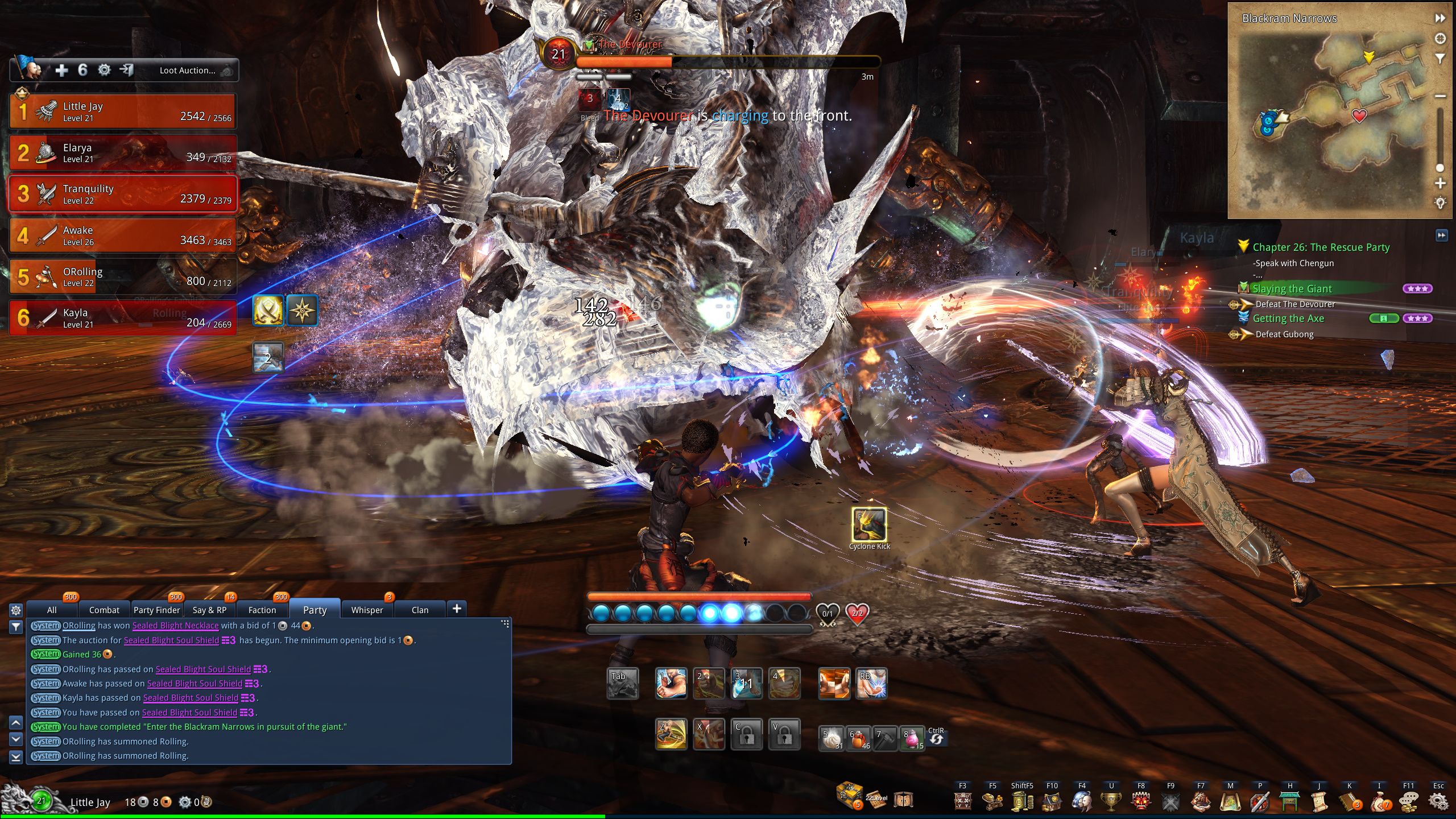 Screenshots in this game just always look so cinematic.

I’d say with all things considered, PvE group content in B&S seems like it will require a near strict dedicated group to play with. While pick-up groups are viable, there may be a few hitches that players will have to contend with in the process.

Next week, I’ll be heading off to the school of hard knocks as I brave the wild realms of open world and arena PvP, so keep your bookmarks set to this site for more!