Heroes of the Storm Greymane Review 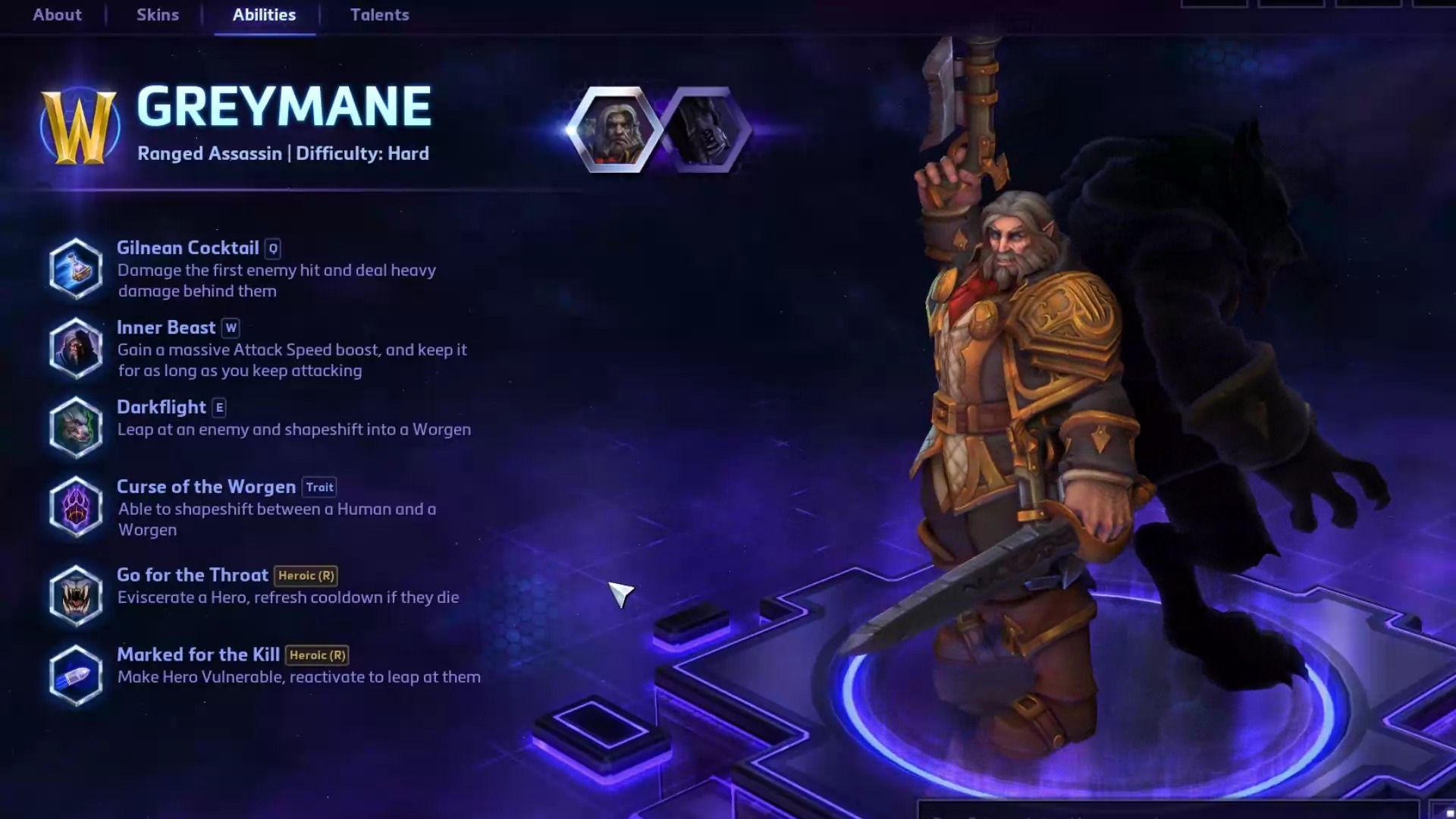 Ever since the disappointment that was Lunara, I was really hoping that the next hero to grace itself in Heroes of the Storm would be better. While Lunara was quite fun to play, she didn’t impact the game very much and could always be replaced with a better assassin in all scenarios. My friend assured me that Greymane would be a better hero that is played similar to my playstyle. Read on to learn more about the latest addition to the HoTS’ roster.

Greymane is a ranged and melee assassin hero from the Warcraft universe. He can take the form of a human king or as a beast worgen. Both of these forms have different abilities, strengths, and weaknesses. The human form can be used to slowly damage enemies from afar and, when confident, the worgen form can be employed to jump into melee range and deal massive damage. It’s great to see more unique and interesting heroes in Heroes of the Storm.

Greymane does everything well that you need an assassin to do; he has good damage output, the ability to chase, escape, and secure kills. It feels like Greymane can do almost anything. However, he is still squishy, which is expected from an assassin, and also lacks any sustain. If you do not have a healer or good support on your team, you will often find yourself being forced to fall back and heal if you do not manage your health points very well. This makes it essential that you use the human and worgen forms efficiently and do not put yourself in too much danger without return.

As a human, he can damage enemies from afar and slowly (although very consistently) wither down their health points. His Q ability, Gilnean Cocktail, can be used to deal area of effect damage in fights or to clear creep waves. It is important to note that this skill shot deals minimal damage to the target it hits but deals high damage to those behind the target in a cone. This makes it great for clearing waves but can also be a good way to damage enemies hiding behind their tank. His second ability, Inner Beast, increases Greymane’s attack speed for three seconds. Three seconds may not seem like a long time but this ability resets every time you attack! This means that as long as you stay in combat, you will always have a 50% attack speed bonus. This can be difficult during fights when you are forced to position yourself well but it is great for taking down buildings.

Using his third ability, Darkflight, Greymane can leap at an enemy, dealing damage and transforming to a worgen. In this form, new abilities become available in your arsenal. His new Q ability, Razor Swipe, dashes at enemies dealing AoE damage. His second ability remains the same in both human and worgen form but his third ability changes from Darkflight to Disengage. Disengage may be used to dash back and transform into a human. While Greymane does not have an escape ability, he can still engage and disengage very effectively. This means that you will not be able to get out of a sticky situation easily if caught off guard, but if you initiate a fight, you can easily disengage when things begin to head south.

Enemies out of position can easily be punished

Greymane has two ultimate abilities which are shared in both human and worgen form. Go for the Throat leaps at an enemy hero while shapeshifting into a worgen to deal massive single target damage. If this kills the enemy, you can cast this ability again for free within 10 seconds. This ability is my go to choice when picking between the two ultimate abilities as it deals massive damage and can be great to chase down escaping enemies. If you would rather stay safe and fight from afar, Marked for the Kill may make more sense. This ability shapeshifts you into a human and fires a shot hitting the first enemy hero. This hero is marked for five seconds causing them to take 25% more damage. You may reuse this ability to leap at them as a worgen. This ability is great for dealing damage from afar or up close and can be used to safely weaken an enemy before leaping in for the kill.

Being able to position yourself correctly and using Greymane’s passive (which grants bonus damage to basic attacks while in worgen form) is the deciding factor between good and bad Greymanes. It can always be tempting to leap at enemies to deal massive damage, but it is important to keep in mind that you are still very squishy. One small misstep and you can get caught in a bad situation. Knowing when to fight up close and when to stay back is essential when playing Greymane.

While Greymane is great at chasing, sometimes it’s better to not chase

Keeping this in mind, you will want to pick talents which work well with your playstyle. Generally, the talents available to Greymane are split between his long range ability in human form and his melee fighting power in worgen form. You can pick between talents which increase the range and strength of his Gilnean Cocktail or those that improve his damage in worgen form. I personally prefer to boost my damage in worgen form as this is the optimal build for dealing the most damage. However, there are cases when it can make sense to focus on improving your Gilnean Cocktail. There may be games where it is impossible or very difficult to survive in melee range or those where being able to poke or split push makes more sense. In these kinds of games, the Gilnean Cocktail build is the way to go.

I highly recommend Wolfheart at level 1 as this talent can allow you to always have Inner Beast ready to go. It can allow Inner Beast to be usable even when simply clearing creep waves as it will greatly reduce the skill’s cooldown. I also recommend Wizened Duelist at level 7 if you are confident in getting kills. Normally in HoTS, a single hero cannot snowball out of control but this talent can provide massive damage boosts to Greymane if you rack up a lot of kills.

I was really pleased to see Greymane actually being quite strong after we saw how weak Lunara was. Greymane still isn’t considered to be top tier but given some time I think more people will begin picking him up. He is definitely a lot of fun to play, and I look forward to seeing how he evolves as more players experiment. I would definitely recommend picking up the hero if you’re looking to add a solid assassin to your roster.