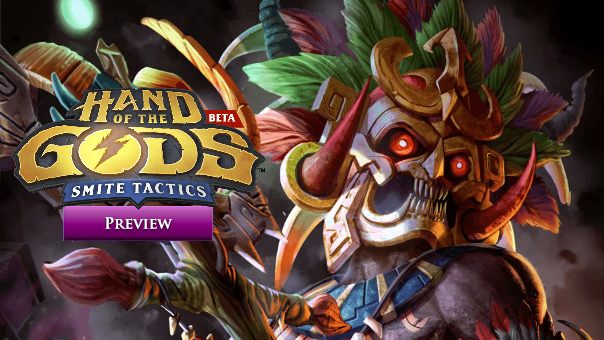 I’m waiting for it; I know it’s coming. “OH MY GOD HIREZ IS RIPPING OFF HEARTHSTONE. I CANNOT BELIEVE THEM!” Which is a ludicrous statement on its face. Hand of the Gods, formerly known as “Smite Tactics”: sure, it’s a card game, but that doesn’t make it Hearthstone. Believe it or not, there were card games before that one. But what is it? It’s a hybrid Card and Board game, in the same vein as Duelyst. It’s changed so much since the Closed Alpha, especially in how you win the game and the nature of how the Gods work in the game. From then until now it’s been a phenomenal level of growth, from simply having two or three pantheons to the recent addition of the Mayan Pantheon and their Figurehead, Ah Puch! Each faction has one leader (as of this writing) that brings a unique style to the game, and players that are familiar with CCGs will be familiar with their styles. Whether it’s Zeus’ “buff the Gods” or Ah Puch’s “Fill the field with slow, annoying zombies”, they all work and have decks they’re strong against and decks they’re weak against. 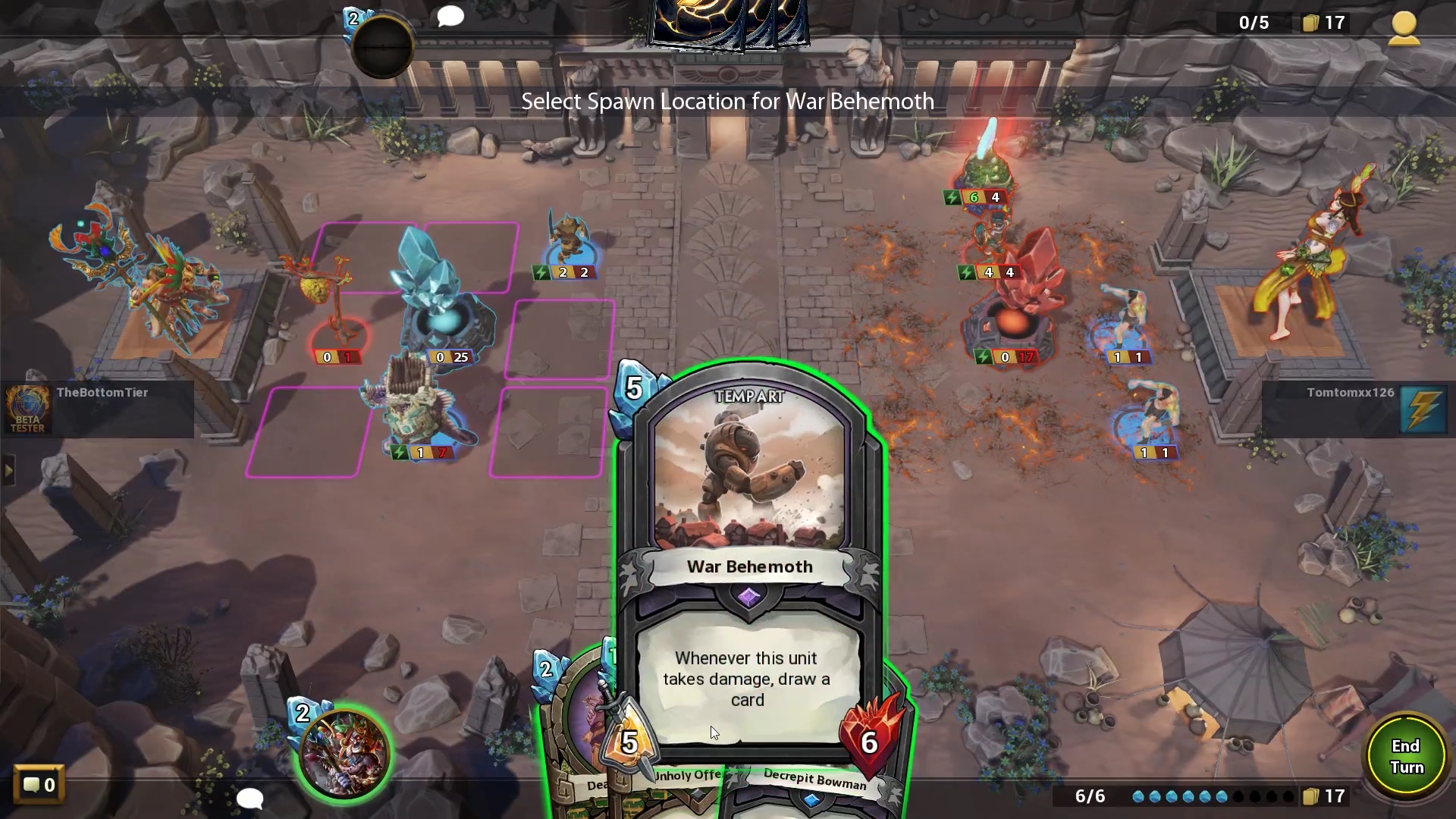 The premise of the game is simple: each player has a God that exists on the outskirts of the map, and before them, a Summoning Stone with 25 base HP. The goal is to reduce it to zero via attacks, spells, and abilities. As of right now, decks have 25 cards, and two of each card can be in the deck. It’s pretty simple; you can’t have cross-faction cards in your deck, but there is a pool neutral creatures/spells that you can employ that share that same “2 per deck” rule. 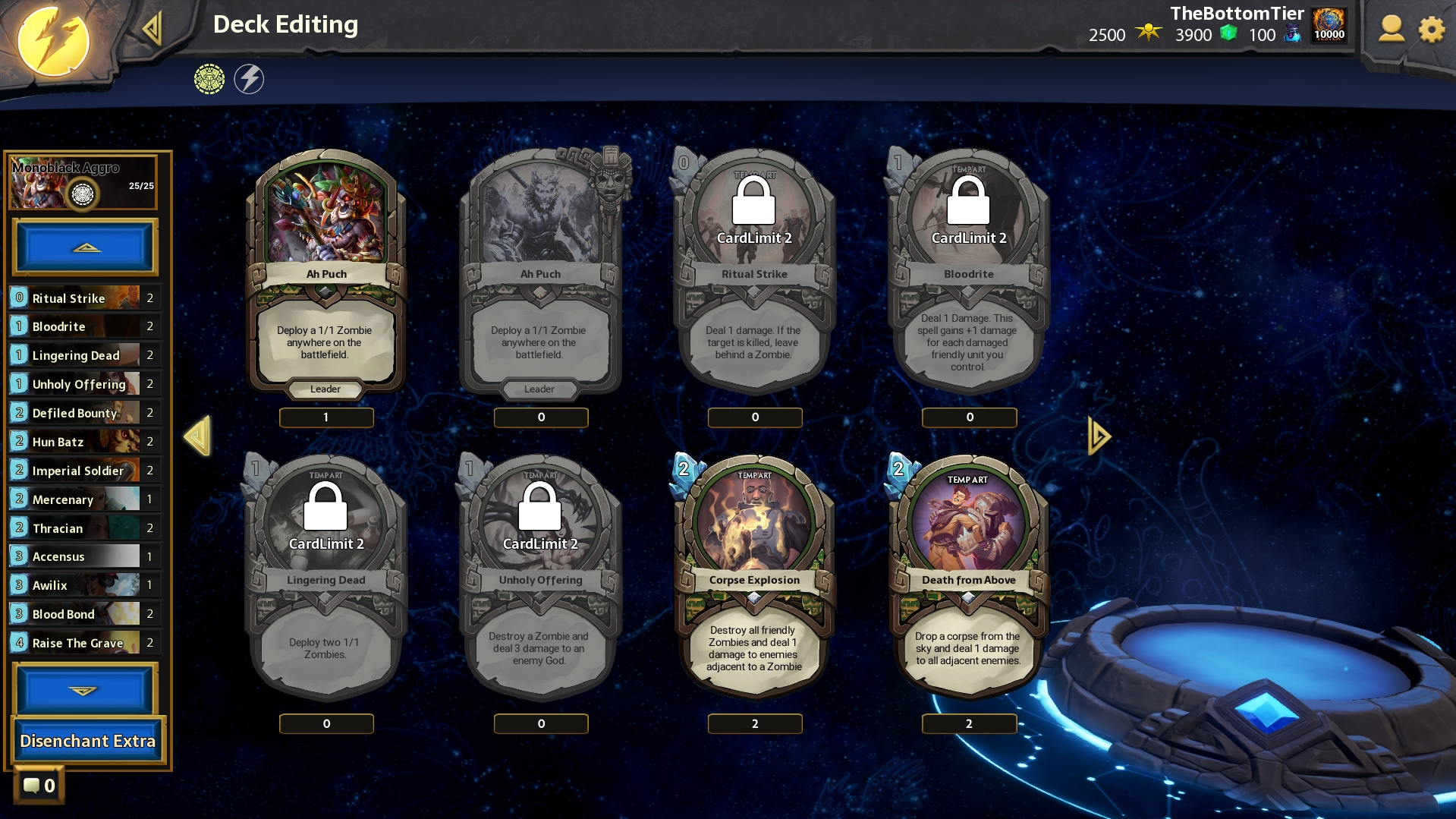 Players draw three cards at the start of the game and have the option to draw any of them again [if they have too high a cost, or simply don’t want it], and a 0 cost “Mana Potion” is granted to the player who goes first. The second player would have an advantage in having 2 mana base on their first turn. When a player plays a spell, it can only be cast around their Summoning Stone. If the spaces are all filled, you are definitely in a pickle, unless you’re Ah Puch. Which leads me to God Abilities! Each God has a power which has a cost and can only be used once a turn. From Bellona being able to push or pull a unit, Zeus giving a friendly God +1/+1, or Ah Puch summoning a 1/1 Zombie [can only move one space] onto any open square on the battlefield, these are important cards and should be used in conjunction with your deck strategy.  A popular Zeus strat, for example, is to control the board and play Apollo, who can attack twice. Build him up every single turn until he can swing for ten a turn, or to play Scylla mid-field and smash little 1/1s. Though I do have to say, once you’ve fallen behind it can feel almost impossible to come back with certain decks. Decks without strong board presence/clear can fall prey to being surrounded and beat on after their field has been wiped once. 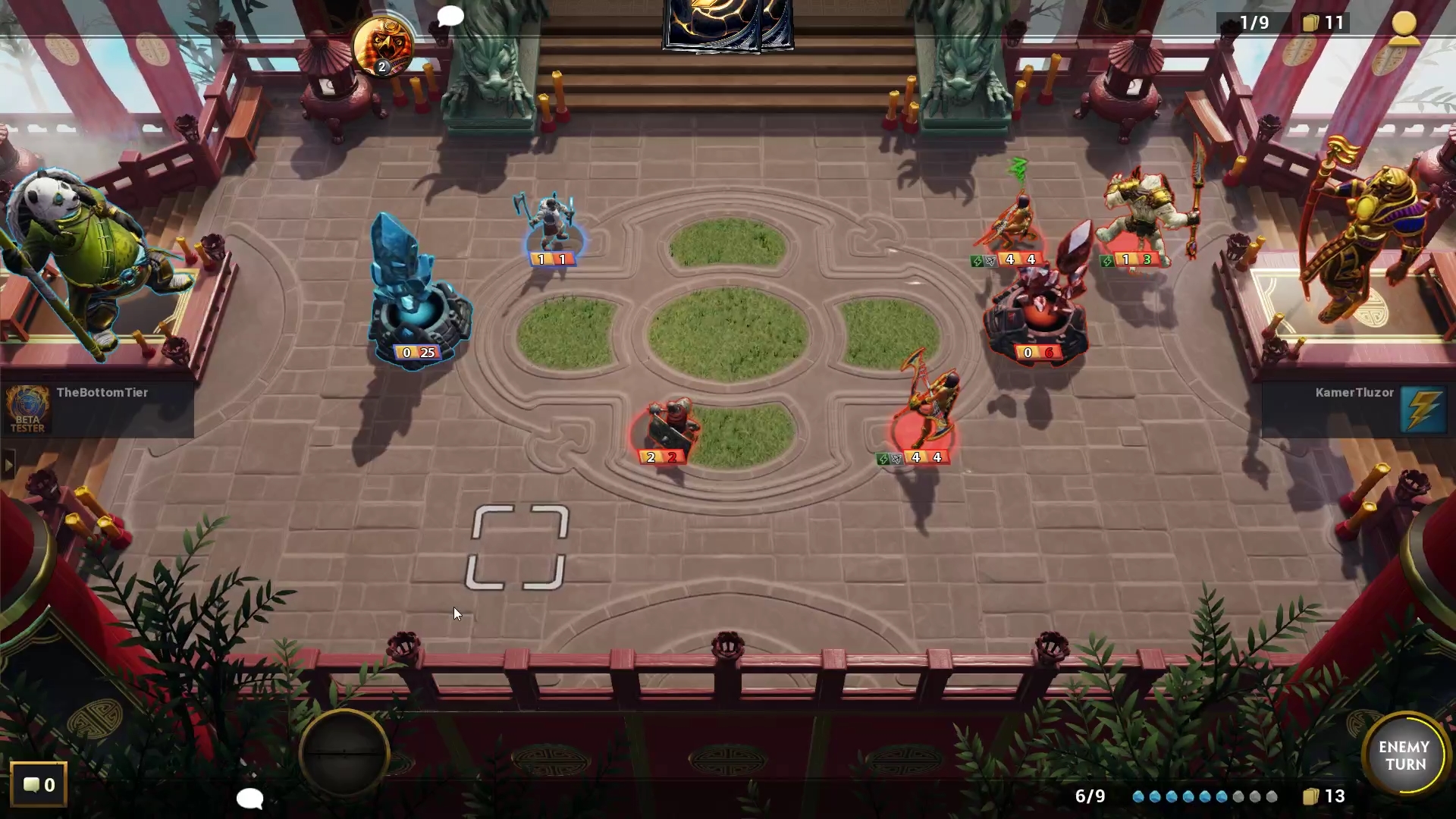 But the game contains more than standard versus mode. The Casual Mode is the standard, and at Rank 10 you can play competitive, which I’m still grinding towards. You start at Rank 30 and grind your way down to being number one. Instead of Story Missions that were in the game at an early build, now there is a tutorial mode, and battles versus AI. There’s another very popular mode for card games: Arena Mode! You can pay 450 Favor or 150 Runes to enter. It’s very easy to farm Favor from Quests. The average quest gives 150 Favor, and 300 Favor gets you a pack. It’s a pretty simple mode: you are given a choice of three Gods and have to build a deck from randomly given to you. You’ll pick from three cards each time until you complete your deck. You can lose up to three times, and depending on how you do, you will receive dust for new cards, favor, runes, and card packs! It’s definitely worth it, especially considering you can use Favor. If you can land at least one win, you’ll get a pack out of it. However, it costs the amount of two packs, so if you don’t do well, it might not feel worth it, but once you’ve really learned the game it can be your best way to farm cards. Because with that in mind …

Heart of the Cards:
I love this iteration of SMITE. It’s SMITE, in a tactical, turn-based form using the items and characters that I have come to know and love. It’s also not pay-to-win at all. The skins for Gods do nothing [just like in the real game], and acquiring cards does not take any money. Will it occasionally feel like a pretty bad grind? Sure, I can understand why that might be. However you do not need to spend money, and through gameplay you can unlock what you need. 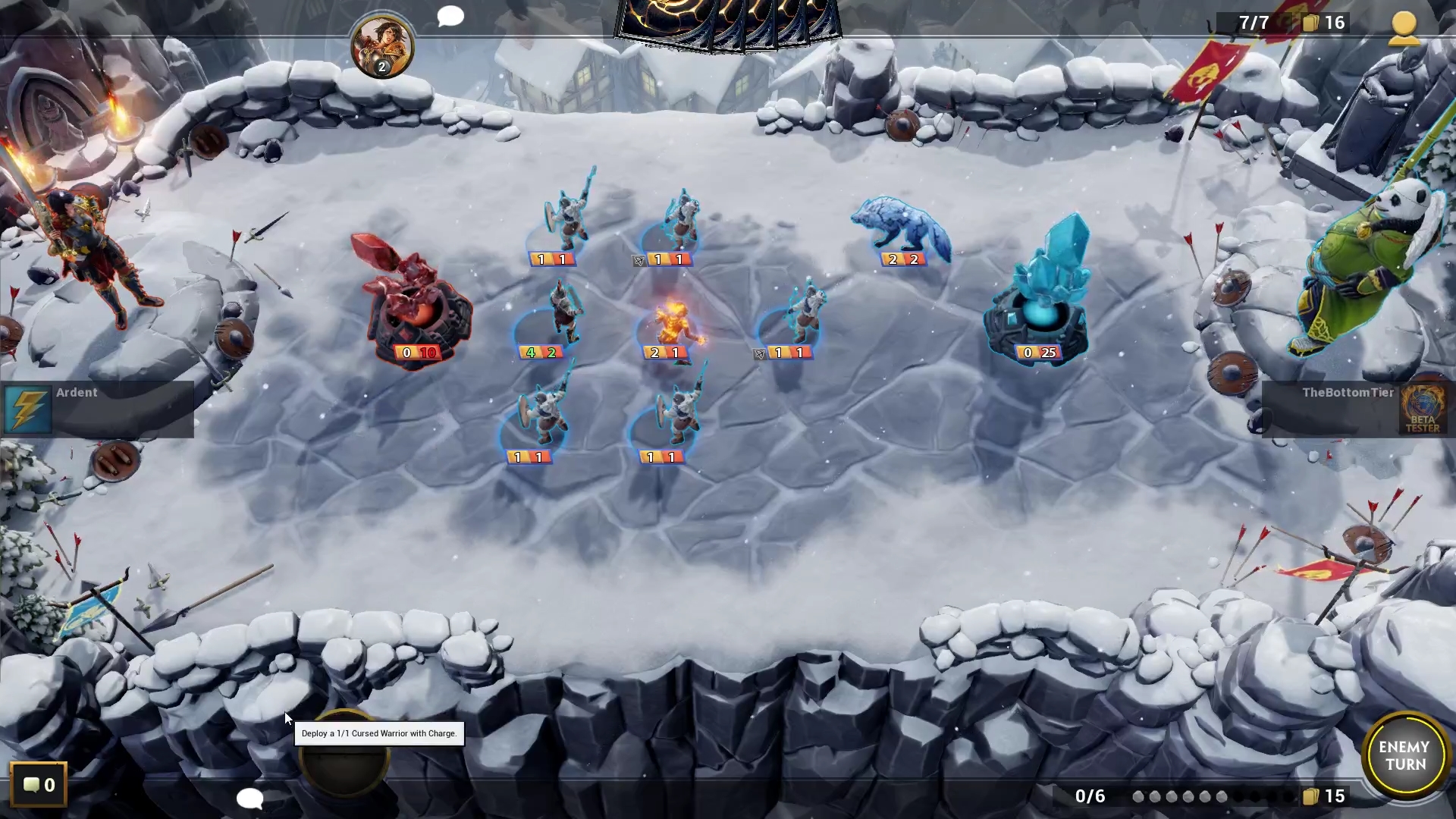 I have a few issues with games like this though, and sadly, nothing is perfect. It’s very hard to get new cards out of packs that you don’t already own. Sure, you can disenchant those to build new cards, and I feel like most of their costs have gone down, but it does certainly feel like it goes terribly slow. And with the increasing number of cards in the game, it’s going to be harder and harder to acquire new cards out of packs. Perhaps if they implement some kind of system like they do in Paladins, or a trading system.

It does lead me to not a complaint, but a fear. The notion of power-creep in card games is a serious threat. It’s why I haven’t played Hearthstone in since the first year. As more and more cards are introduced, it becomes imperative to have as many of them as you can so you can compete. In order to keep selling cards, the “new” cards are almost always superior, because they want people to stay in and continue purchasing. Hand of the Gods has a slightly different approach because it’s also a strategy game. Just because you have an incredible Norse Rushdown or something, it means nothing if you do not know the practical applications of the deck itself and the strategy behind it. I am curious how they will address power-creep, which I covered in a live interview with Adanas on MMOHuts Live.  However the game is solid, constantly growing, and I hope they add more to it, such as 2v2s or something like that to keep it and the meta, both casual and competitive interesting. Hand of the Gods: Smite Tactics is a terrific way to use a current IP in a new, fresh way. It’s fascinating to see how far it’s come and I look forward to seeing where it goes.