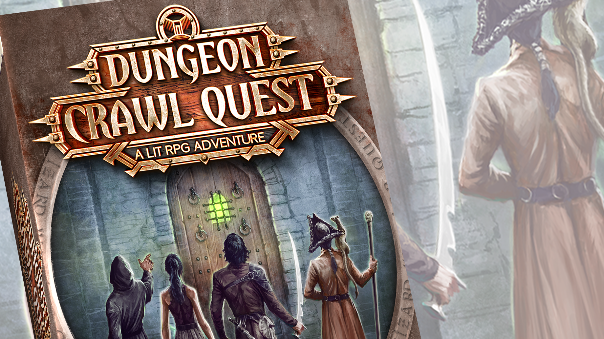 I combined my passion for computer gaming and playing games that pay real money, DnD, and epic fantasy to concoct this book. I was addicted to a groundbreaking RPG called Wizardry: Proving Grounds of The Mad Overlord back in the days. I have included many nods to the game that had me up for several months of all-nighters in this book.

Into The Game provides readers with an original experience including breathtaking illustrations and a unique in-real-life/trapped-inside-the-game story. Taking you deeper into the books immersion are in-depth Dungeons and Dragons style player sheets that give you unique insight into the abilities and personalities of both the novels main characters and its monster antagonists.

Another thing I included is illustration. I have been fascinated with drawings in fantasy ever since Thror’s Map and The Trolls in J.R.R. Tolkien’s The Hobbit. I am also a big fan of the DnD Monster Manual, so I had to go all-in on illustration. I commissioned over a dozen works for this project including tavern logo’s, action scene’s, monster portrait’s, and of course an epic fantasy map. I love the way it all turned out.

To spread the word about Into The Game, Fantastic Science Fantasy Adventures Press is launching a unique advertising campaign that includes everything from the tried-and-true to the new.

“For the new, we teamed up with CPMStar,” says FSFA Press marketing director John Palmer. “They have the largest ad network in the games and youth oriented entertainment space. We will be running ad’s on several MMO review sites they represent including MassivelyOP, MegaGames, and OnRPG. For the tried-and-true, we will be running online ads on some Sci-Fi/Fantasy staples like Clarkesworld, Analog, and Locus.

From the Humpty Nose to literary prose… C.A.A. Allen is a hype-squad dancer for multi-platinum hip-hop group Digital Underground, Humpty-Hump’s personal nose crafter, and a fantasy book author. His first book, The Cave Maze: Wizard Warrior Quest was a finalist for best Sci-Fi/Fantasy novel at the 2017 San Diego Book Awards.

Into The Game will be on sale for .99 cents from June 1st to June 30th on Amazon.