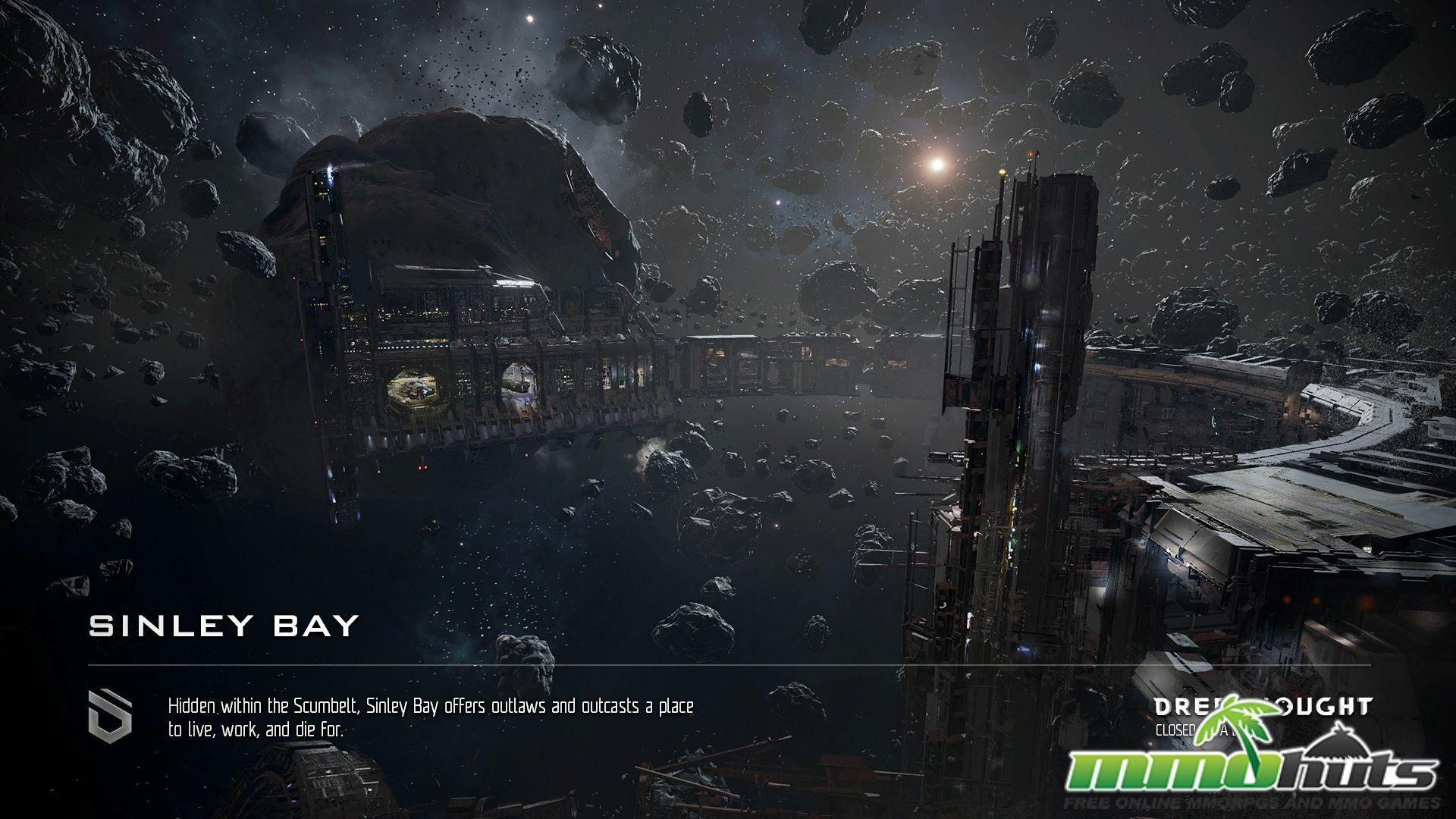 Oh. Em. Gee.  Dreadnought. At Pax East and Prime 2015, I got a chance to play this on both occasions, and at Prime I had an interview with one of their head devs that DizzyPW did not prepare me for AT ALL. Worst on camera first interview ever. But that’s not what I’m here for today! I recently got into the Closed Beta to get back at captaining a starship, which I’ve wanted to do since last year sometime. Though they are starships, almost all of the work I’ve seen in game has been done on a planet or two, which makes sense. Just stars would be boring, and this lets them show off gorgeous terrain and plenty of things to hide your capital starship behind as you prep a bombardment for your foes. I love Dreadnought, because it combines things I did not think would work together quite so well. Big Ass Ships, and First/Third Person shooters. Sure there have been space shooters in the past, but those are almost exclusively fighter craft, like TIE, Wing Commander, etc.  This is more like ships you might find in EVE, only you have direct control.  You know what this game reminds me of? World of Tanks. That’s what this is. It’s a fancy, beautiful World of Tanks.

Sure, it can feel a little slow if you’re the captain of a Dreadnought or Destroyer, but it handles quite well for that. You aren’t going to be doing barrel rolls, weaving and bobbing around asteroids or mountains. You cruise at a nice, steady pace, lock on and send out Macross-style missile barrages, lasers, and even nuclear freakin’ missiles. Let me say that again, for the people in the back. YOU CAN SHOOT NUKES AT SHIPS. Come on! Of course there are anti-nuke tech, passives for your crew; if you can imagine it, it’s probably already in the game. I’ve seen everything from tractor beams to ships that shoot green beams that repair your ship. Because of course it needs to have a medic. This is the definition of a modern day shooter, done in a way that I don’t recall seeing done before. I thought this game was going to be absolute ass until I got my hands on it. I was a skeptic, then I had it in my hands. Is it perfect? Far from it. But is it fun? You bet your ass it is!

It has a helpful tutorial that teaches you the ropes, and anytime you get into a new portion of the game, such as the hangar, the market, progression, etc, it includes a bit of video from one of the members of your new home, telling you what you need to know. You do all of your unlocks by going up in ranks, which you gain from playing the game. Being successful in battle gains you Reputation [goes towards rank] as well as Fleet Points, which is one of the two currencies. The other is “Greybox Points,” which is the Real Money Currency. It’s the one thing anyone who plays a F2P game dreads. But while the cat is out of the bag, let’s talk Market real fast. You unlock the ability to get new weapons, ships, and “Officer Briefings” [Passives that trigger under certain conditions], Internal Modules [abilities for your ship], et cetera.  Most of the items in the game cost FP [Fleet Points], but there are things that cost GP. Appearance/Cosmetics cost GP, not FP. And then there are “Hero Ships.” 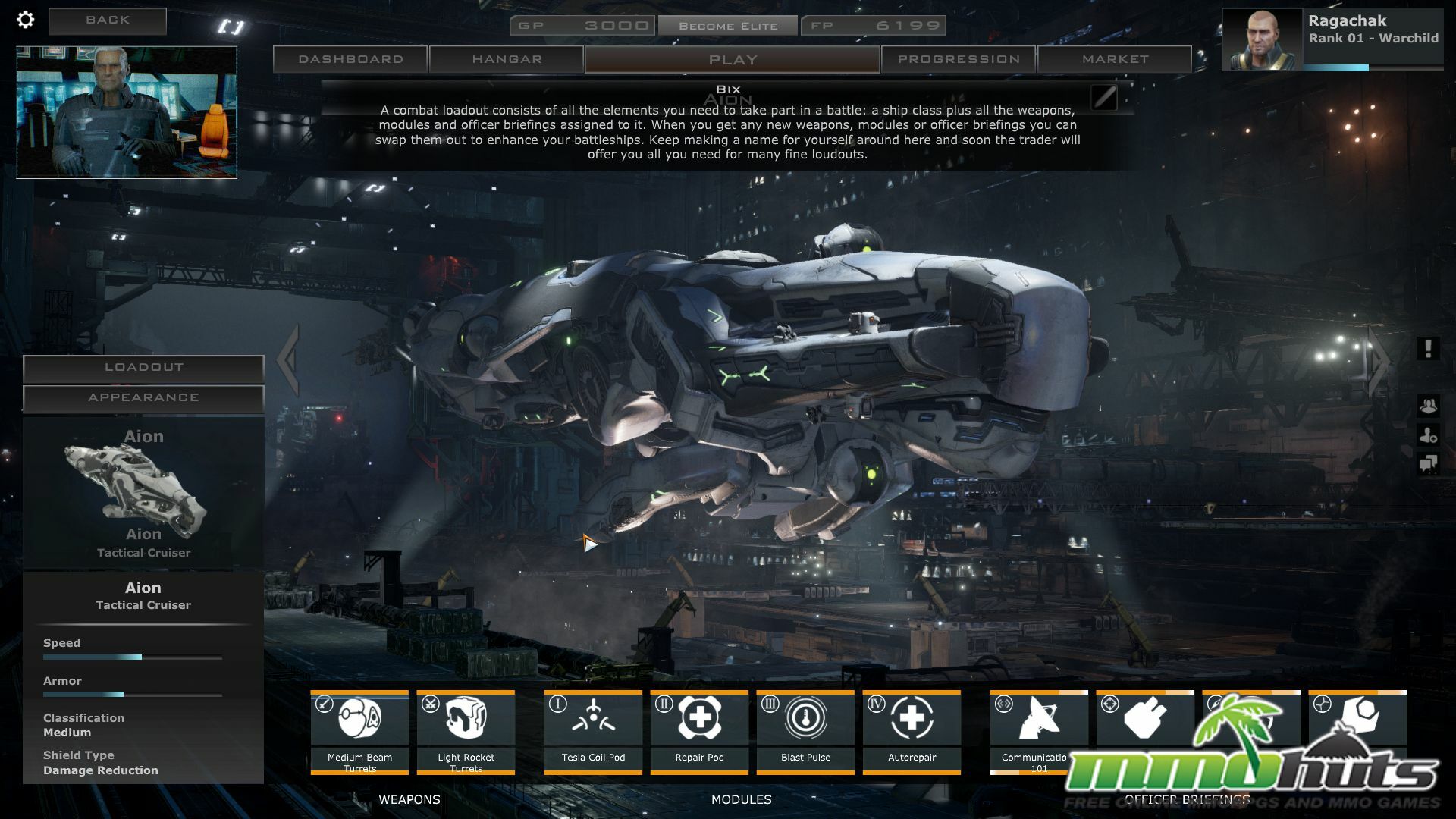 From Nukes to Tesla Coils, you can destroy your enemies in variety of fun and exciting ways!

Hero Ships are basically non-moddable ship that took part in the Solar War, which makes up this games’ story. It’s like playing as Thrall in WoW, instead of a regular Shaman. You can’t change them, but they come with a very solid kit that is enjoyable to play and look at. Everything else? Fleet Points, which you can purchase when you have the rank/points. You also have TRADER ships, which you acquire from the market.  These can’t be modified either, but you start off with one from the game and can accrue more of them. The regular ships can be adjusted, modified, and given loadouts for you to use. It appears that the only ships you can take into battle are ones you’ve put on your loadout bar, so even Hero Ships can be put there.

Sure, ships are expensive, and the temptation to spend real money will probably be high. I don’t feel like it’s such a bad thing to spend a little money on a Hero Ship and use it to get other ships to customize the way you see fit. I mean, if you want, you can set up a loadout of the same ship several times, if you want them to be equipped for different situations. And that’s what makes this game so special. It’s a tactical game. It’s not just, “Marine runs into the field, switches from AK to Pistol.”  You have several ship types, each with their own uses, speed, and starting equipment. You have Dreadnoughts, Corvettes, Artillery Cruisers, Destroyers, and the Support of the Tactical Cruiser – all your needs are met in this game. 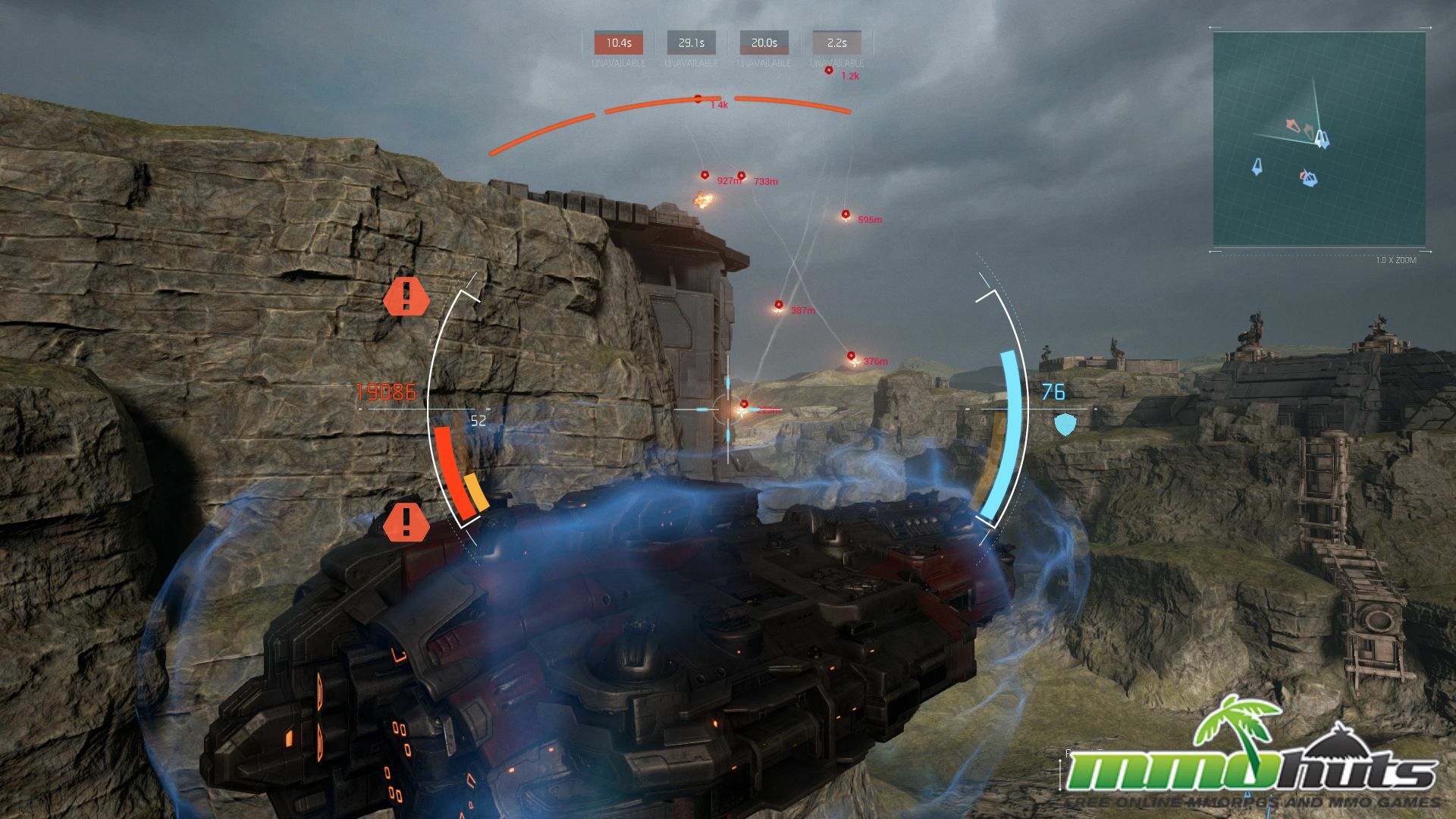 When you see an anime-style missile bombardment coming. . .I recommend shields.

You also have abilities on your ships. Each ship has two main weapons that you can swap from using Q. They do need to reload/recharge, but you won’t have to worry about running out of ammunition at least. Then you have your four “abilities” or Modules. Standard fare is two attacks and two tactical abilities, such as the Dreadnought’s “Warp” that creates a jumpgate, or damage buffs, or repair abilities. These all have cooldowns, and with good reason. The attacks that come from these do serious damage, from missile swarms, disabling missiles, old-school ship broadsiding to nuclear weaponry. You can adjust and change these with Loadouts, unless it’s a Hero/Trader ship, just as you can your Officer Briefings. It’s incredibly tedious to have to wait to get the good stuff, and then farm up the money for it, but it’s not really that different from CoD or Battlefield in that regard. 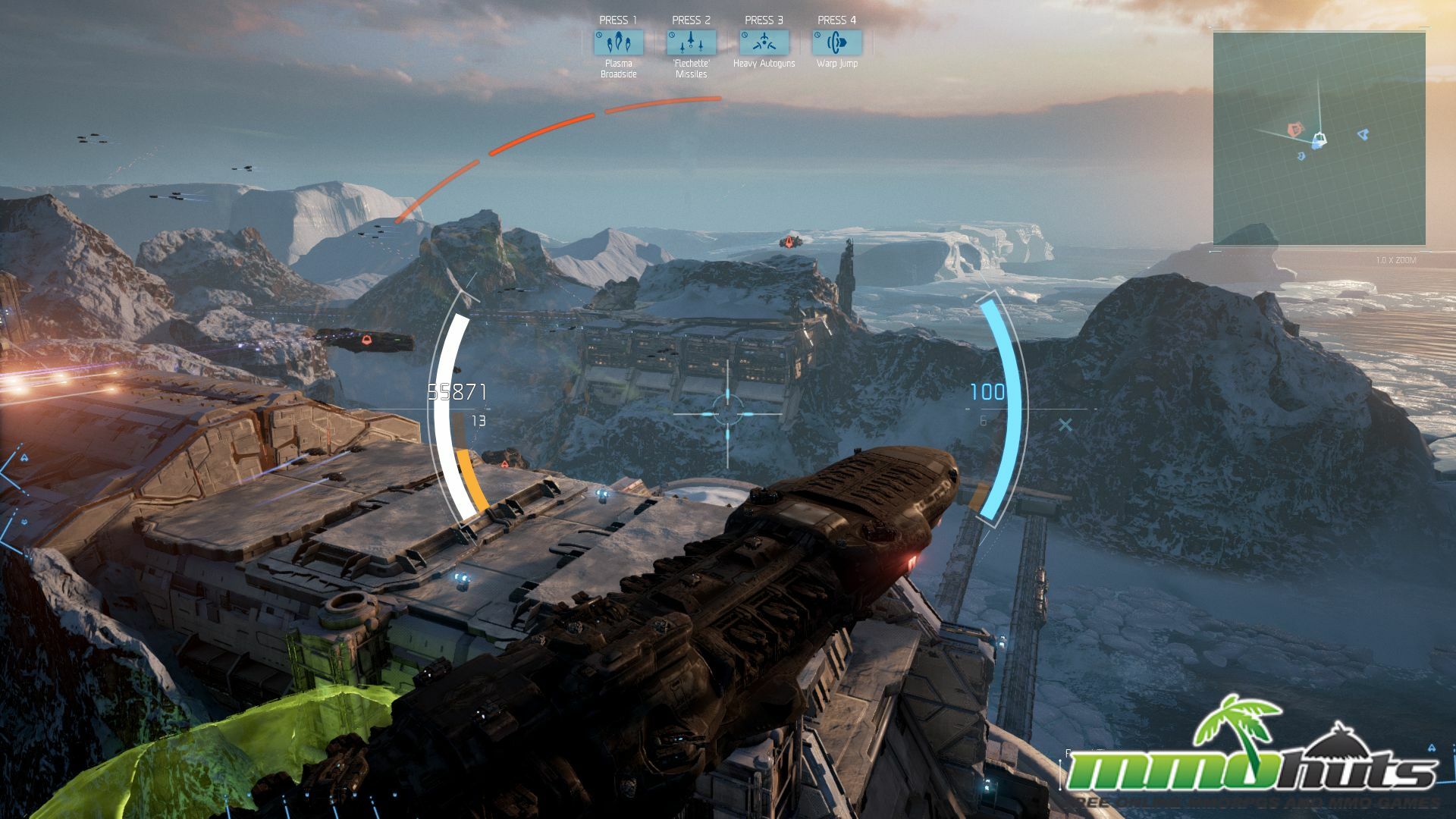 Out here, in the mountains. . .firing missiles.

Right now there are two game modes, Team Deathmatch, which is five on five in a tactical environment [albeit a beautiful environment] where ships cruise around and earn reputation by getting kills and assists. First team to 100 points wins, and depending on how useful you were on your team determines your rewards.  I have yet to get into a Team Elimination, but I played it at Pax. The queues have just been too long!  The cool thing about it though, is when your capital ship is destroyed, you get a smaller fighter to join in and assist your team, instead of just sitting around doing nothing. I loved that, because I’m not always so great at Elimination, though I did pretty well back at Pax! I’m sure there will be more modes, but it’s going to take a bit of a grind, the way it stands right now, to get a collection of ships. You unlock ships as you progress, but you still have to buy them. 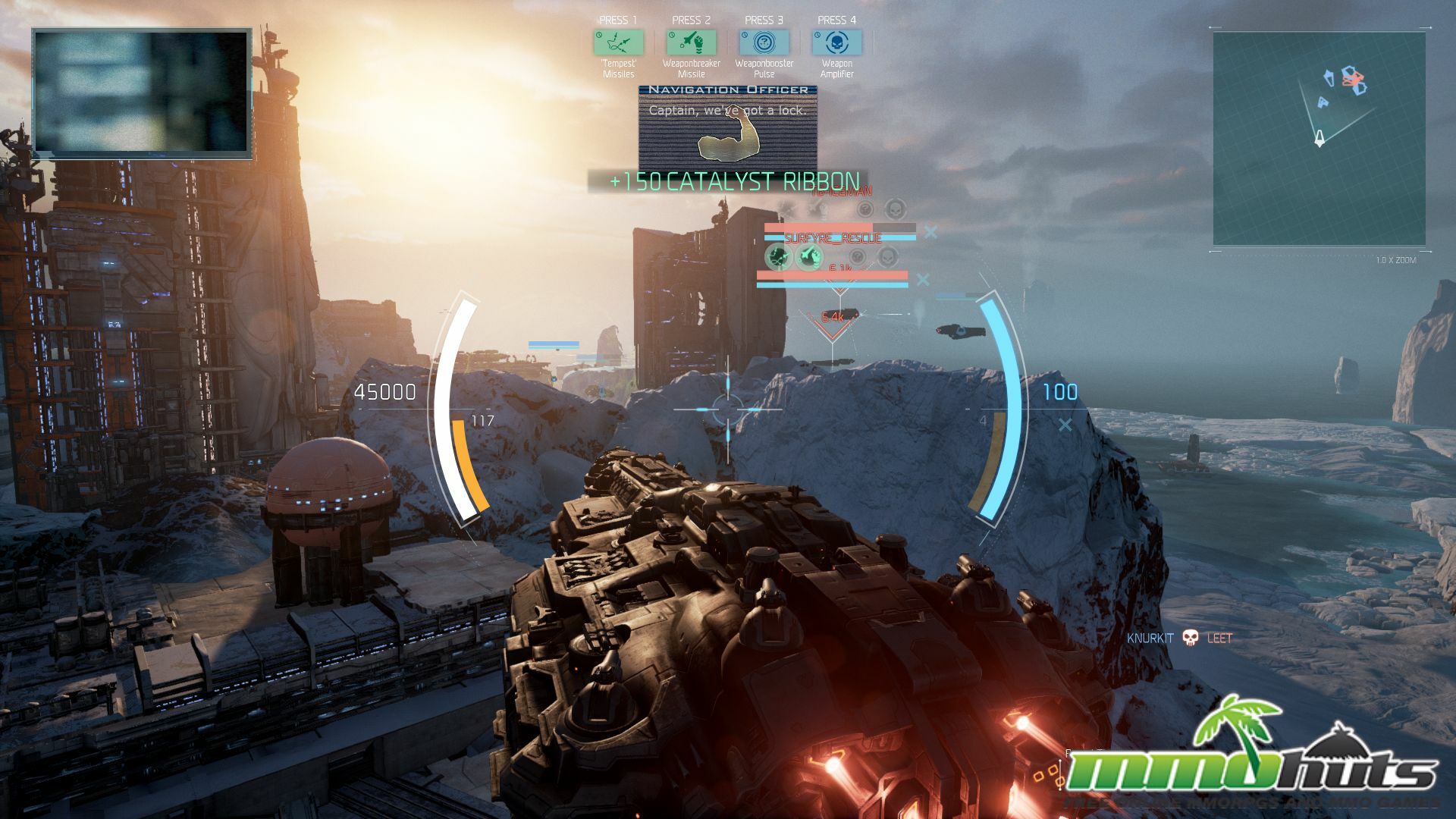 It is intensely satisfying to watch as that target lock settles on your opponent.

You’re not going to be jumping over hurdles, leaping out of windows, switching to your sidearm to kill and kill and kill. You’re the captain of a Starship. You can use E/Middle Mouse to adjust the focus of your ship: Shields, Engines, Firepower, you can disable enemies, or rise and fall in the air to avoid attacks, lock on with your missiles and blast from a safe distance. Dreadnought’s going to stand out in all the best ways of the shooter community. It’s pretty hard to reinvent the wheel in the shooter world, but this is a game that has to be played to be believed. Every person I’ve talked that was a skeptic changed their tune as soon as they got into it. I’ve only seen a few of the stages, but the game is absolutely gorgeous. I’m not really a fan of the Voice Over though; it’s probably the weakest visual/audial part of this game. The only major criticisms I have right now are how slow it could be to acquire ships, the voice acting, and the queue times [but that’s a hazard of a beta].  The more I see, the more I’ve enjoyed so far. I can’t wait to see it go live, and get my hands on it once again.

Want more Dreadnought? Check out JamesBl0nde in action in our first look video! 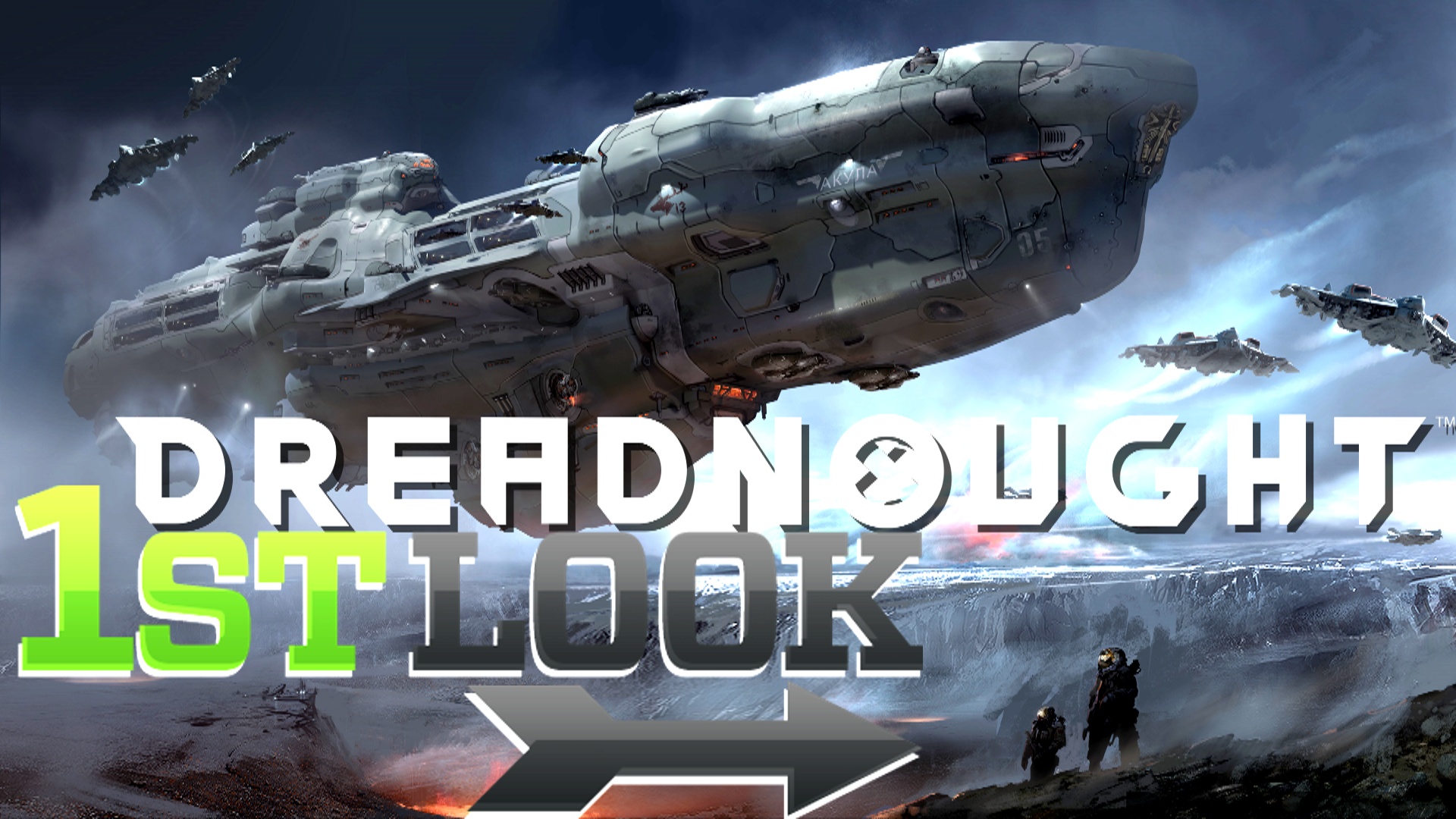