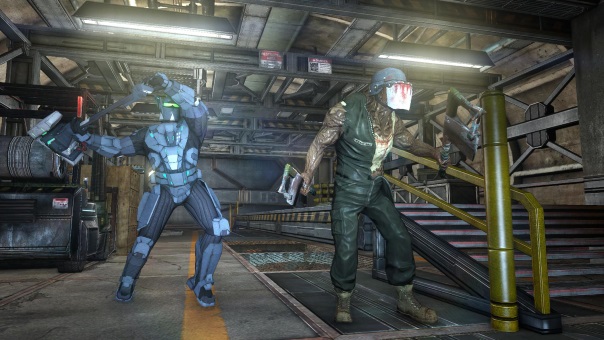 Trion Worlds has announced that the next update for Defiance 2050 is coming on October 15th. This “Trouble in Paradise” update has new missions, enemy types, but most importantly, the new Crusader class. The Crusader is a melee bruiser class that wields a mighty hammer that they swing with deadly efficiency in melee range. With their abilities and skills, the Crusader can leap right into the fray or pull enemies in, as well as unlock an absorption shield and a mighty outward attack. If that weren’t enough, the Crusdaer also has the incredible Meteor Strike to use from above, crashing down into their enemies. In addition to being available separately, owners of the Ultimate Class Pack will automatically receive the Crusader class as part of their purchase, as well as the upcoming Engineer class. The Ultimate Class Pack also includes four previously released classes, $50 worth of Bits, and more!

The “Trouble in Paradise” update also introduces the Grid as an enemy type. An aggressive force of EGO constructs that can infect cybernetics and control the attached individual, the Grid is a determined and terrifying force in Defiance 2050. Capable of manifesting as hard-light entities and operating independently of a host all together, the Grid possesses devastating energy weaponry, with their true goals remaining a mystery. Defiance 2050 will flesh out the Grid as a race, introducing all-new story elements, lore, and even a new Grid enemy for the first time. In addition to this, the fan-favorite annual “Hulker Hell” event is coming as well, from October 15th until November 4th. Special Arkfall events will provide loot and unique drops, including Halloween-themed cosmetics.