Tome of the Sun Mobile Review 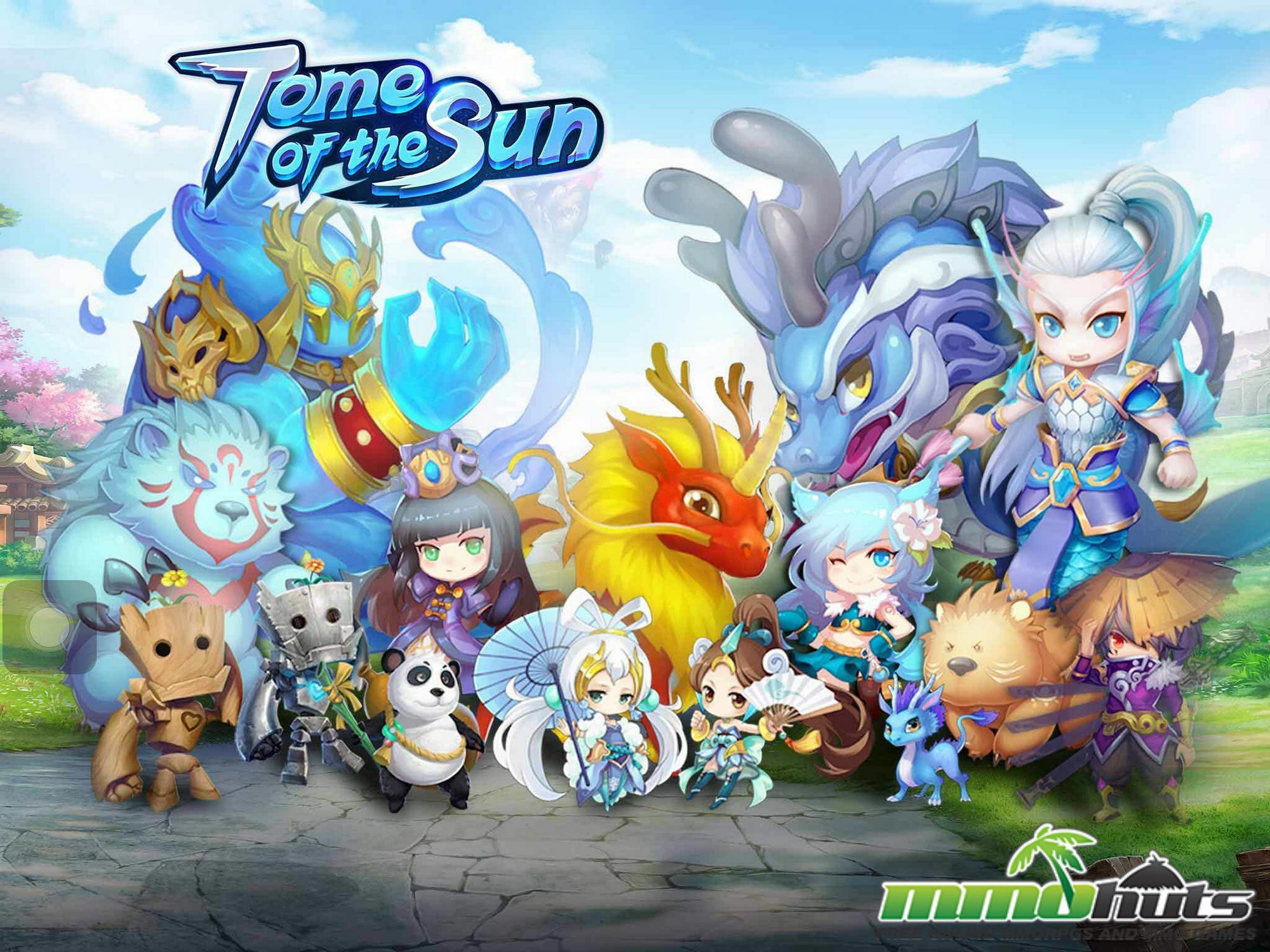 Tome of the Sun is a mobile MMO by NetEase Games for the Android/iOS. The game puts you in the shoes of one of the heroes (Duelist, Knight, Mage and Ranger) in a world where the Tome of the Sun that has kept the Shadow World in check has been stolen.

As one of the customizable, but gender-locked heroes, you have to adventure through the world of Tome of the Sun in hopes of trying to get back the Tome. 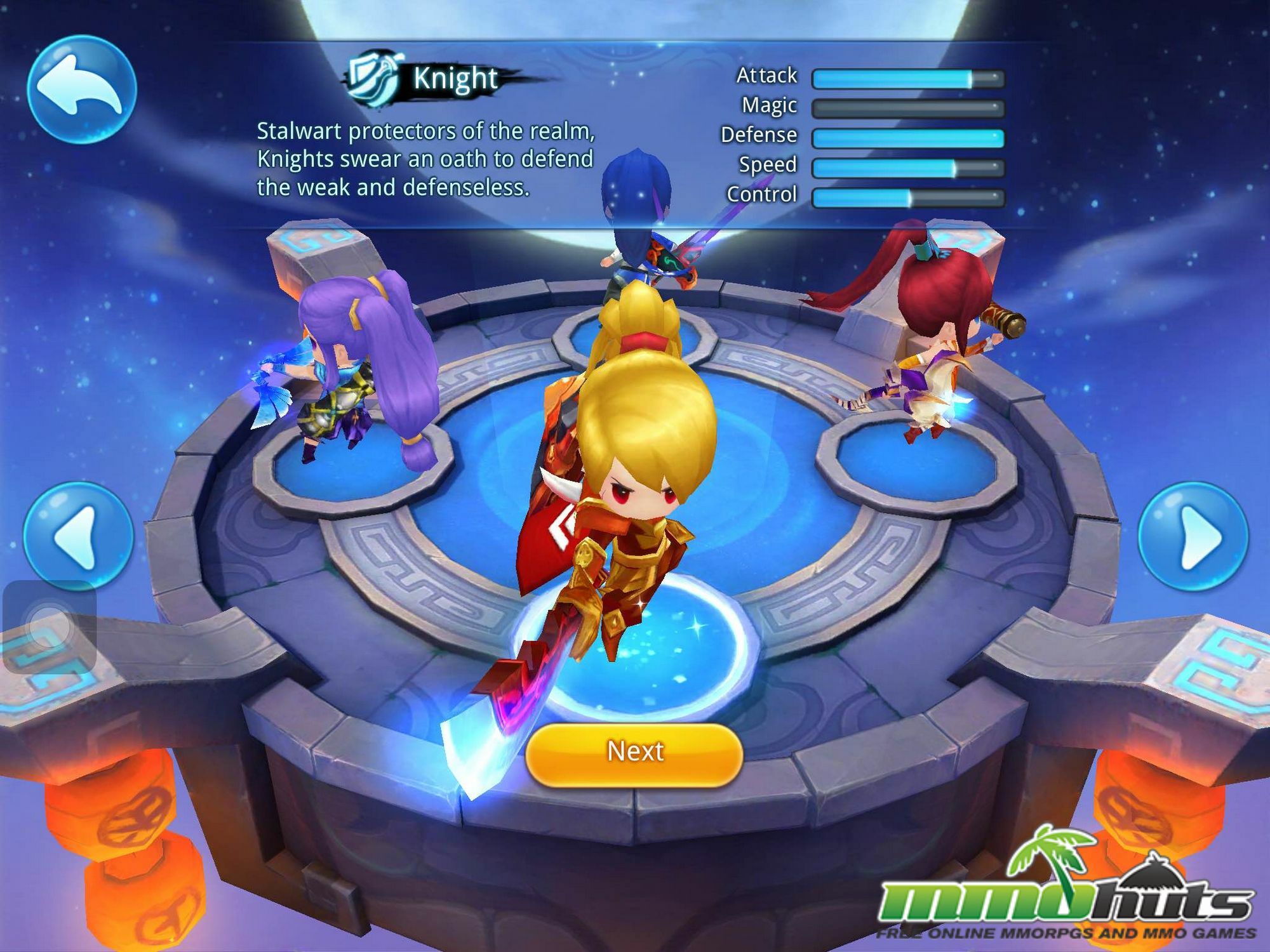 Choose 1 of four classes and set out for adventure!

Tome of the Sun uses a mixture of touch based controls with an automated targeting system for normal attacks and skills. Movement is basically just tapping the screen while you have the option to either make the targeting fully or semi-automated. Of course if automated games is your pet peeve, full manual attacking and skill activation is also an option.

The game pretty much follows the hackneyed gameplay found in MMOs where you follow a series of linear story-based sets of quests which would fall into fetch or kill quests. This also doubles as the game’s tutorial and game progression system too as the game slowly unlocks various gameplay features as you level up.

While Tome of the Sun does follow the cliched systems you’d often find in MMOs, either PC or mobile based, it tries to add a bit of variety in the auto attack and skill activating system by adding the Smash system. 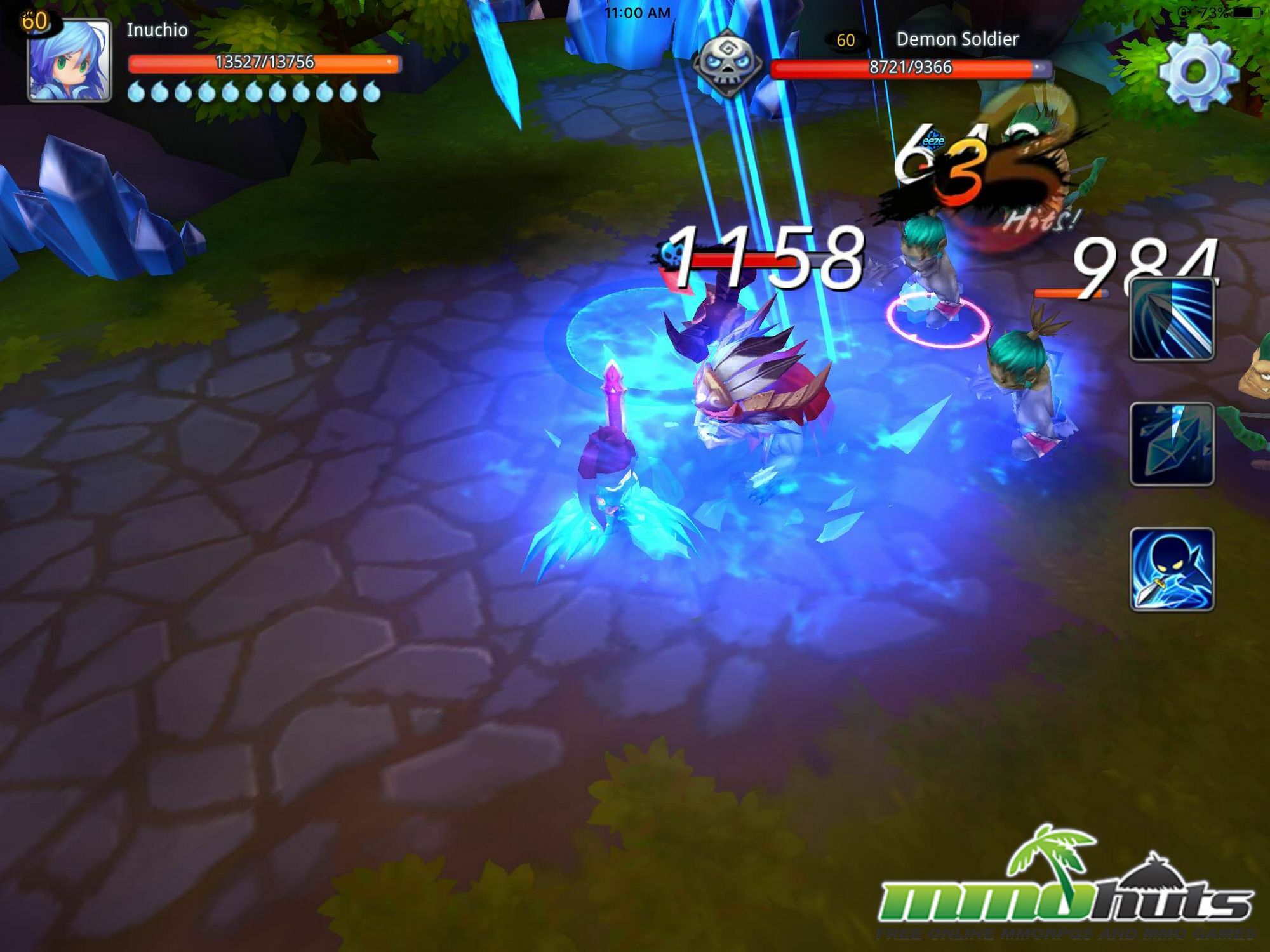 The invincibility frames of a well timed smash can get you out of a pinch.

The smash system works by randomly assigning an opponent with a smash tag during battle. You have to swipe that opponent to activate an event where your character jumps in front said opponent. Time will then freeze before you unleash a no resource special attack.

To be fair to Tome of the Sun, I can’t deny the beautiful visuals the game has. I like how the colors just pop out on the screen. Skill animations look smooth and distinct even on a congested screen. I also liked how the chibi looks are presented. The whole world is built around the theme so they don’t feel out of place and they’re cute as hell to boot. 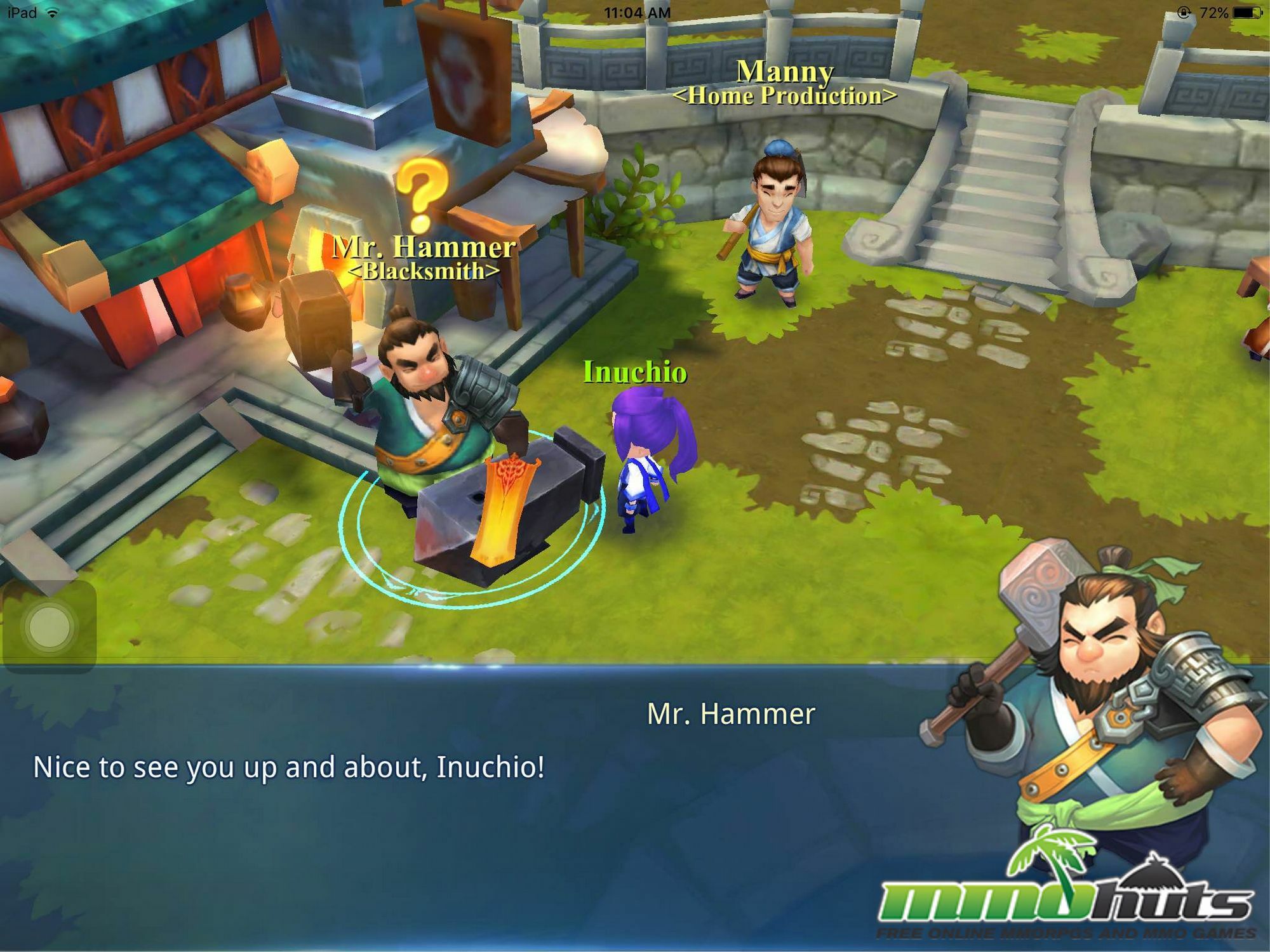 Unfortunately they lost me with the gender-locked classes. The Melee fighters are locked to male characters and ranger classes are only locked for the females. The silver lining is there are at least decent customization options including hairstyle, eyes, and other varieties of color swapping. Tome of the Sun takes it a step above their competition by also offering further visual customization as your weapon and clothes change as you level up the corresponding items.

The basics of a modern MMO are all present as well. You can expect to find the quest tracker with automated pathing to get you from point A to point B without missing a beat watching Game of Thrones. There’s also PvPing and tons of achievements that you can unlock as well.

A stamina system is also present in Tome of the Sun. Despite overall being more MMO than your typical mobile game, you will still be limited in playtime by stamina. Each dungeon or monster run reduces that stamina. When it hits 0 you can still walk around in game but you won’t be able to go into instances. 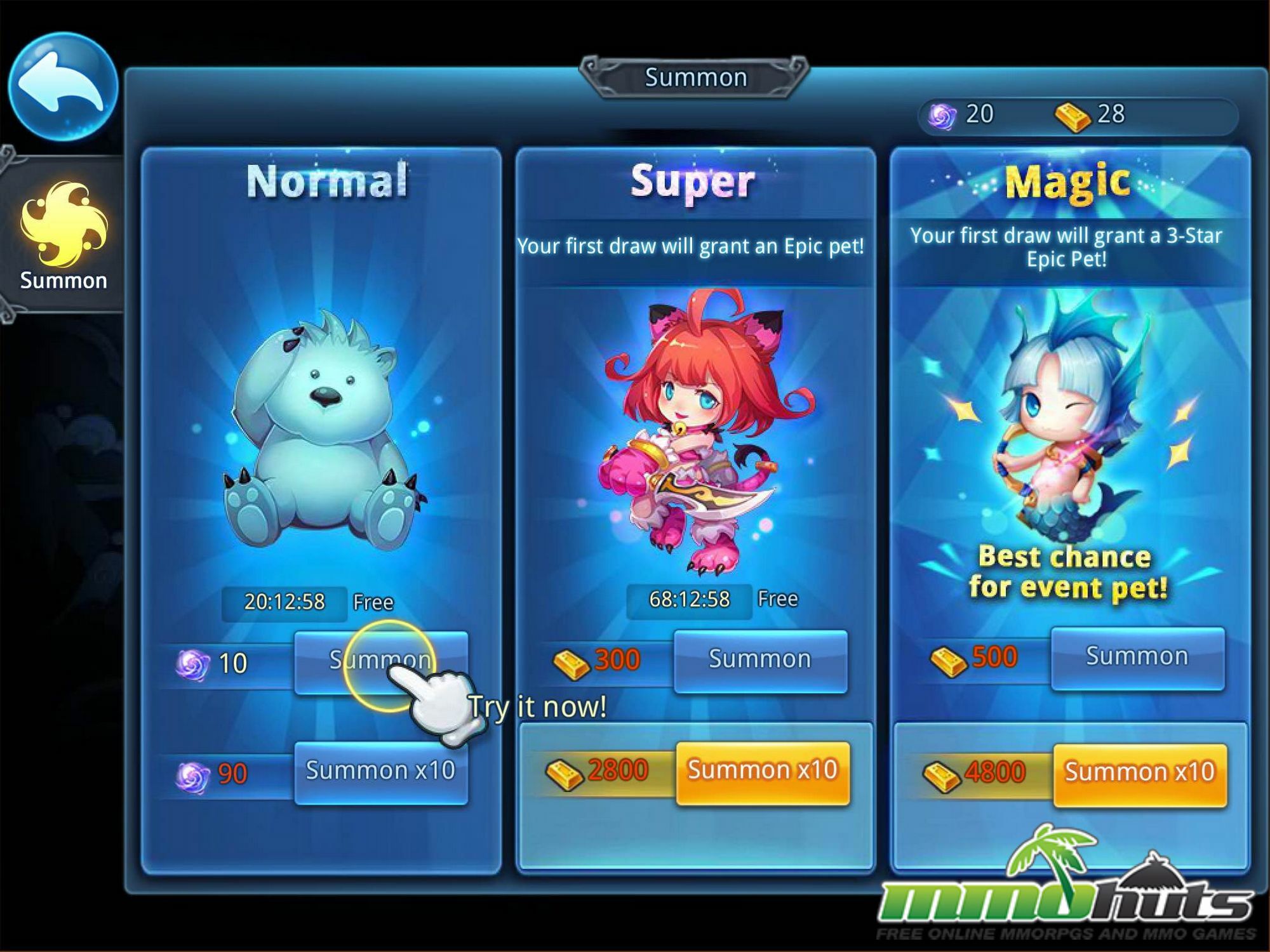 Raising your pet is almost as involving as your main character.

One of the features done better than most mobile games is the pet system. The game has tons of pets that you can summon.

Basically, your pets are your “other” avatar where you need to allocate equipment and gold to upgrade and level up. This puts a bit more emphasis on how you manage resources since you have to also “nurture” your pet so that it can be an asset to your adventures instead of just another cute distraction in your dungeon runs.

Tome of the Sun is a really enjoyable mobile MMO. The game looks awesome and shouldn’t chug along on older devices thanks to its properly implemented chibi theme. Animations are smooth and colorful, making dungeon runs frantic and fun. With its overall look you’ll no doubt have friends asking what you’re playing when they glance over your shoulder.

Tome of the Sun is a well done mobile MMO that doesn’t shake the boat in terms of innovation, but instead focuses on polishing features done poorly in similar games. With more and more brainless RPGs flooding the mobile market, it’s nice to see there’s still a few developers out there pushing for something more engaging like Tome of the Sun.

Overall, the game is an enjoyable romp into a fantasy world. The world is large enough that you can easily sink multiple hours and still not explore everything. Gameplay is noob friendly to both players new to MMOs as well as those unfamiliar with mobile touch controls.

On the other hand, if you’re a mobile MMO veteran looking for a mobile MMO that would bring a breath of fresh air for you. Then try a different title. Because while Tome of the Sun is a solid title, it cruises to the finish line with cliché MMO elements that have been done plenty of times before.