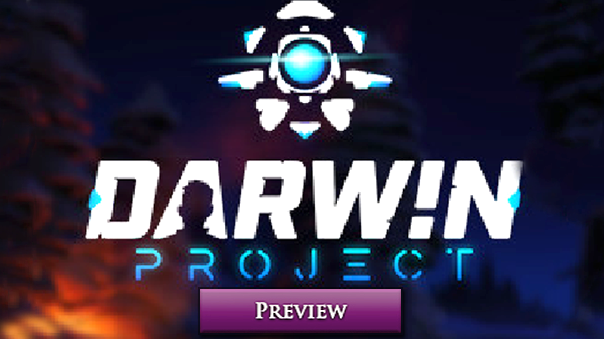 Sifting through the never ending list of Battle Royale games these days is a tiring affair. Off the back of Playerunknown’s Battlegrounds – and more recently Fortnite – every developer and their dog wants to cash in on the multiplayer/Twitch streaming cash cow. Scavenger Studio’s Darwin Project however has something a little different that goes a long way.

Before revealing the all-important twist, we need some context. Darwin Project at its core is a third-person survival battle royale game where ten unlucky inmates are dropped into a snowy arena to do battle against each other. To win, you’ll need to warm yourself against the cold and don’t die to other players, easy peasy.

Complicating things a bit is the initially daunting crafting system. Essentially you have four sides of the crafting wheel: passive bonuses like increasing axe damage or cold reduction, survival aid like a fire or arrows, traps like a tripwire, and electronics which can bestow a number of perks such as temporary invisibility or local radar. Creating any one of these things costs one of three resources. Two of which, wood and leather, are found readily around the game world. The third requires a limited electronic piece found at specific places and times visible to all players on the map.

In short, increasing your arsenal is generally the best way to beat other players and doing so requires the farming of resources from across the map, thus, organically driving players into each other. Sure you have a chance to kill someone with five kills and yourself zero, but it’ll be awfully difficult when they have a placeable turret, full cold resistance, max speed bonus, the highest tier of axe damage, littered bear traps, and a never ending supply of fire arrows while you only have the basic gear. 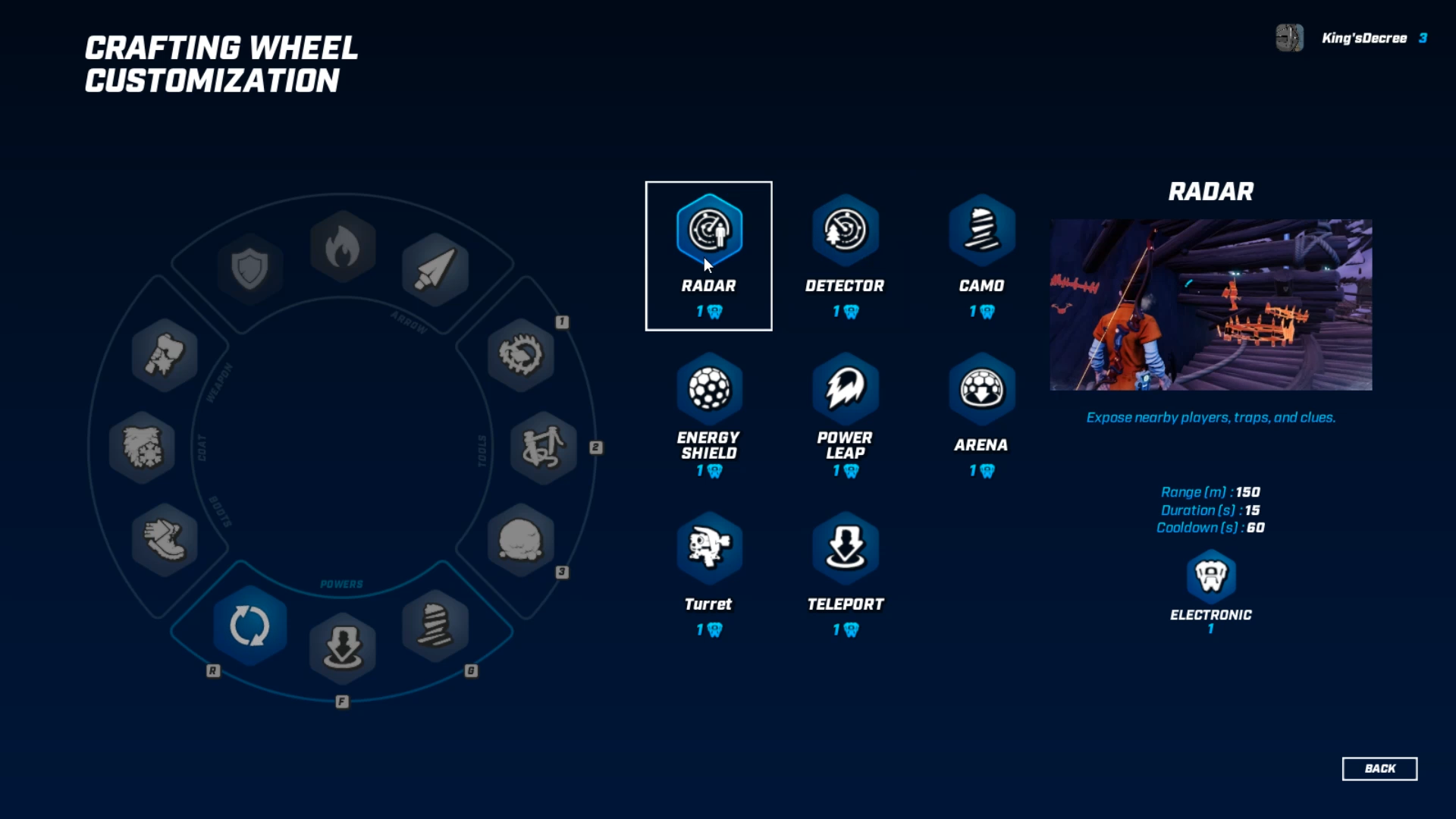 Swap out the items on your crafting wheel between games.

Combat boils down to exactly two methods of damage: you can shoot someone with an arrow or hit them with an axe. A regular sequence of actions include starting from afar and peppering your foe with arrows as you close the distance eventually dealing the killing blow with a well timed swing of an axe.

Though intuitive, the combat is by far my least favorite part of the game. Nearly every encounter ending in a death had me leaning back in my chair, taking my glasses off, and pinching the bridge of my nose in frustration. For starters, the bow felt oddly inconsistent. Some shots I thought were on point would go wide, and other shots I fired with wild abandon would hit headshots. Going melee didn’t feel much different. Sometimes I would seemingly come in with good timing and completely miss or clash with my target, other times I would just spam the mouse at random and happen to hit the dude trying to jump past me. With my short time with the game, everything relating to combat felt twitchy, clunky, and largely unrewarding. Though I don’t doubt someone better than I could get exceptionally better and more consistent results.

Alternatively, you can avoid conflict entirely by hiding out and letting the dangerous environment takes its toll on others, but there is of course the ever closing map boundaries pushing everyone to an increasingly shrinking area on a single hexagonal tile.

Similarly limiting long-term stealth, many of your actions leave behind traces that other players can find and track your location with. For example, building a fire to fight the biting cold leaves a pillar of red smoke in the sky for all to see, otherwise, interacting with the environment such as cutting down a tree, running across the snow, or opening a chest leaves an investigateable marker. These three major points – resources gathering, shrinking boundaries, and tracking – all assist in the goal of getting players to interact with each other quickly and reliably.

Despite not being a big fan of the combat, I can certainly appreciate that all of the gameplay mechanics are methodically and cunningly intertwined in such a way to be lacking of anything superfluous. One of the things I hate most in modern games is hunger management. Darwin Project tosses that idea to the side in favor of a single cold meter, which makes sense considering the location, while also seamlessly blending with other parts of the game.

Winning a match non-violently by utilizing my various upgrades.

And now the complicated discussion about the director system. The director is the big twist on an otherwise straightforward battle royale game. This unseen force is a single person at the control panel of the entire operation. Their view is that of their participants and they can control the flow of the match in somewhat subtle ways, but may potentially influence game winning or losing conditions for certain players. Their powers are various and break down to forcing players to or from a hexagonal tile, bestowing perks like a speed boost or healing, and targeting a specific player to be hunted by all other players for a special loot chest. Also, being designed for streaming in mind, the director can open a two-way chat with the person they have their camera focused on allowing that player to talk about how the game is going, how they’re doing, and whatever else they feel like chatting about to the director and their respective audience.

I find it actually quite surprising such a system could be introduced knowing how potentially disastrous it could be. Sure bad directors can have their powers limited, but for at least a short time you can actively force several participants to have a terrible time simply by unfairly targeting them with the various powers at your beck and call.

On the other hand, a good director can make an unforgettable experience for players by making a fun, dynamic, and interesting match, even if it isn’t 100% fair across the board. For example, the most memorable game I played over the open beta weekend had a Twitch streamer with over 1100+ viewers. The caster flipped between players making introductions and chatting candidly until he got to me, the guy without mic. Despite silently interacting with this guy using screen shakes, he decided I had to die. It’s a battle royale reality TV show after all, we need big talkers and interesting storylines complete with life goals and heartstring-tugging sob stories, not a quiet take-it-on-the-chin kind of survivalist. My punishment: I would be target for a manhunt. Needless to say, a minute later I died after multiple other people swarmed to my location as the director cast over the fervent action he had a direct hand in making happen. Was it unfair for me to singled out like that? Yes. Did I still have fun? Also yes.

The director system in my opinion is a fairly wild gamble potentially forcing an uninstall in rage, but also allows for players and broadcasters alike to work hand in hand to create unforgettable memories, hilarious highlight reels, and thoroughly interesting content not found anywhere else.

As the director I had this individual manhunted, feeling a bit bad for him I sent some healing his way.

Evolution of a Genre

Darwin Project is an odd one. I think the base game is lean and smartly designed, albeit lacking some long-lasting competitive quality, but otherwise a solid title in the battle royale market. Adding the director layer is somewhat hard to judge because it could actively ruin the base game, or possibly create careers for Twitch broadcasters to play the director as a full time gig. The potential is definitely there, but will enough of the community respond to it? I think a good way to make that happen is to get established personalities there on day one casting as a director with the necessary knowledge and know-how to make certain positive experiences are being made both for the in-game players and for the observing game audiences.

Regardless of what happens, I think it’ll be interesting to see how it all shakes down. Check it out for yourself on Steam for $14.99.