Magic: The Gathering: War of the Spark Review 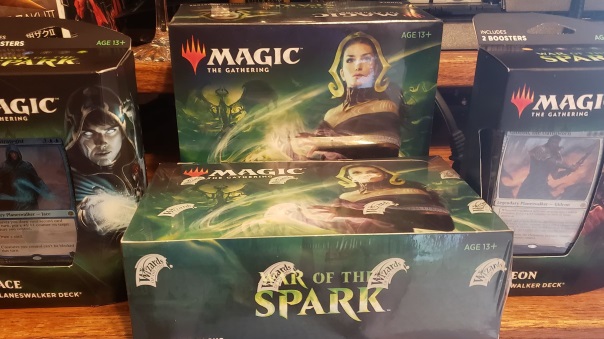 Editor’s Note: Wizards of the Coast provided War of the Spark cards for the purposes of this review/content. War of the Spark is already available in MTG Arena, and the physical release is May 3rd, 2019.

I’ve been playing Magic: The Gathering since the mid-to-late 90s, and I’ve seen sets come and go. I’ve really been thinking about this a lot, but I think War of the Spark just might be in my top three sets of all time. There are quite a few reasons for this, so that’s what we’re going to talk about. Today, I’m going over my thoughts on War of the Spark for Magic: the Gathering. This applies to both the MTG Arena (which I spend more time with) and the physical version of the game. There’s even some overlap in this expansion, as the Planeswalker Precons you can purchase come with a code. This code can be popped into MTG Arena, and it will give you the deck that you spent your money on. If you play both or have a friend who is active in MTG Arena, and you want to help them out (or help a friend get started), this is a tremendous way to help someone else start in the digital realm. That’s what MTG should be about anyway – friends playing an awesome card game, coming together, and learning.

Perhaps the biggest thing that makes this a powerful update, beyond its compelling story (and a new Nicol Bolas, let’s not forget that!) is how accessible it is. Why is it accessible though? Once Planeswalkers were introduced into MTG, they shook the game’s standard meta forever. They’re powerful, more often than not, they have decent value, and they tend to be pretty hard to get ahold of, in terms of simply cracking packs. If you wanted a playset of Jace, the Mind Sculptor, better be ready to cough up 400-800 bucks, perhaps more. With War of the Spark, there is a guaranteed Planeswalker in every. single. pack. Sure, some of them are “Uncommon”, but many of those uncommon Planeswalkers are amazing! This means getting viable Planeswalkers is not too hard to do, plus there is plenty of Proliferate options to increase their Loyalty. Most (if not all) of the new Planeswalkers have no up-tick (an ability that increases their loyalty), but they all come with very useful Passives.

That’s another new, interesting change: Planeswalkers getting passive abilities. Now you really have to think if it’s worth popping that last point and sending them to the graveyard. But thankfully with Karn’s Bastion, you can proliferate with a land. You also have Ajani, the Greathearted. He can drop 2 loyalty points to give all other planeswalkers and creatures you control a loyalty counter/+1/+1. Those two cards together can really get your win-con on the board faster than you might think. There’s a new Planeswalker for every kind of deck there is. Do you want to run Bant Defenders? Use Huatli, the Sun’s Heart (uncommon). She’s your third option for your win-con. Discard? Davriel, the Shadowmage, and Ashiok, Dream Render! Hell, Ashiok is great in any kind of discard/mill deck. It stops your foes from searching through their deck, and it can exile their graveyard. Are you sick and tired of dealing with GB Dredge/Fetch? Slide Karn, the Great Creator in your deck, put Ashiok and a Chromatic Lantern (or just run blue mana)! Get rid of their whole annoying graveyard!

I think perhaps one of the best things is that Jace is not the greatest, the most monstrous, absurd Planeswalker for a nice change of pace. If I were going to label a trio of general, all-purpose powerful Planeswalkers, I’d say Karn the Great Creator, Nicol Bolas Dragon-God, and Liliana Dread General. Sure, Jace Wielder of Mysteries is great. He’s a self-mill machine, and in a meta where there are several options for mill decks, but he’s very much a double-edged sword. You could get down to almost no cards, and then right as you’re popping that final ability to win the game, Vraska’s Contempt hits you right in the noggin, you have no library, and Jace dies. I’m sure there are pro players far, far better than me that have contingencies for that, but that’s too ballsy for me. That deck is far outside of my comfort zone. But speaking of decks, there are some really wild concepts running around right now, thanks to War of the Spark. These new uncommon/rare/mythic rare Planeswalkers really make certain decks pop just a little faster, or if nothing else, offer some security for your strategies. Not every deck requires hundreds of dollars of commitment either, which is wonderful.

Two of those, in particular, are Red Deck Wins, and Mono-Blue Tempo. These still cause me no end of trouble; if I’m not quick enough, I’ve lost to a few 1/1/ and 2/2s, and I cannot blame anyone but myself for it. Both of those decks have potential new cards in this expansion, but it won’t be incredibly expensive, at least at this point. That’s one thing I really love about this expansion, there are just so many powerful deck styles right now, whether you want to do aggro (RDW, Tempo, RW Aggro), control (Grixis, Bant, Abzan, Esper), or even weird, annoying jank (Oooze, Artifacts, Superfriends). Just for a laugh, I built a deck in MTG Arena that’s all lands and Planeswalkers, with a few artifacts in the sideboard. And you know what? It got a few wins! Not many, but it wound up working! Just about anything can work right now, with the right cards in hand. On the topic of cards, one of the things I received contained a “Top 10” of coolest cards in this set, by one of the Magic designers. I think it’s interesting, but as it happens, but I already covered this topic! They’re cool cards, but I recently wrote a piece where I talk about some amazing cards that might not be on people’s radar, in my War of the Spark preview, linked below. Finally, the video below is a recent livestream I did, where I unpacked these cards, and showed them off in MTG Arena, because my original set-up did not work the way I wanted. This could be the best time to get into Magic: the Gathering. The barrier of entry is not very high, there are dozens of different ways to play that are both fun and viable, and Planeswalkers, one of the most fun cards in the game are not Mythic Rare chases, but also come in Uncommon/Rare flavors.