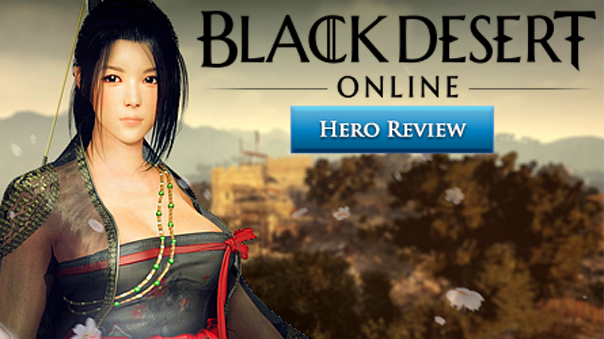 It’s been several months since Black Desert Online released in North America and Europe. In that time the game has had some major updates, plenty of disgruntled players, but plenty more that are satisfied. It’s easy to see that, overall, Black Desert has been a huge success. To add to that success, Daum and Pearl Abyss has finally released Siege Warfare along with the Ninja and Kunoichi classes, with some minor changes added on. So, let’ hop into the game and see what’s changed.

The biggest, and most obvious, changes are the addition of the much-wanted Territory Control and Siege systems. Guilds can now fight for control of the various nodes and cities within the game, something that I feel should have been made available much sooner. The second biggest change is the addition of two new classes, the Ninja and the Kunoichi. The Ninja/Kunoichi are essentially the rogues of Black Desert Online, with the ability to disappear in the shadows and do amazing burst damage. Also, if you’re an old Age of Wushu player, there is an unintentional Easter Egg in some of the ability animations. 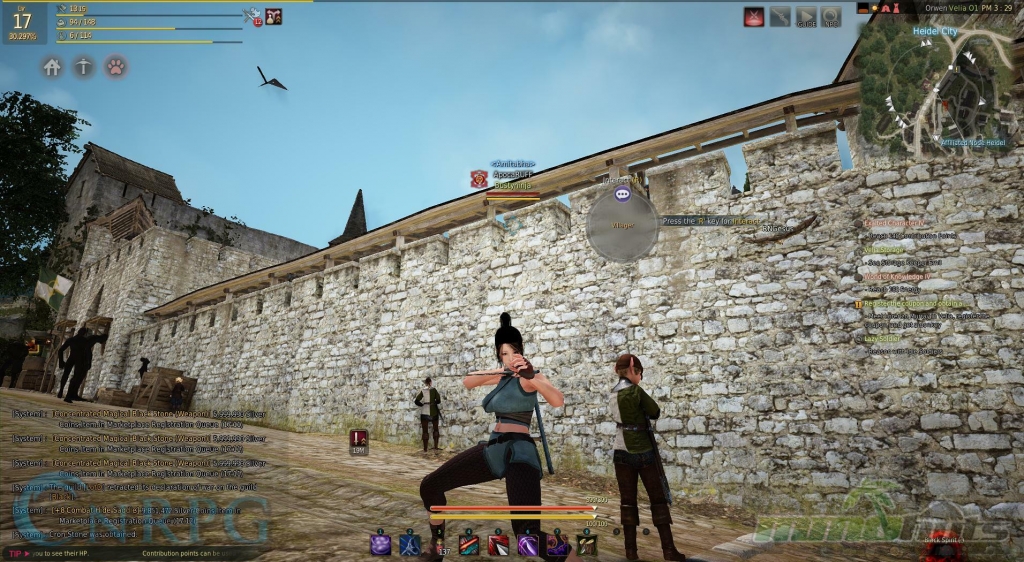 Bustyninja is my name, boob physics is my game.

Of course, me being me, I made a Kunoichi, which is basically the female version of the male Ninja. I also named my character Bustyninja, which is entirely appropriate if you look at my character model (which is a very slightly modified version of the default). I will never get tired of Black Deserts attention-to-detail, especially when it comes to boob and butt physics. The costumes for Kunoichi are alright, but I honestly didn’t enjoy them too much. If you play a ninja, however, the stuff looks a bit better in my opinion. Especially if you don’t mind fishnets. 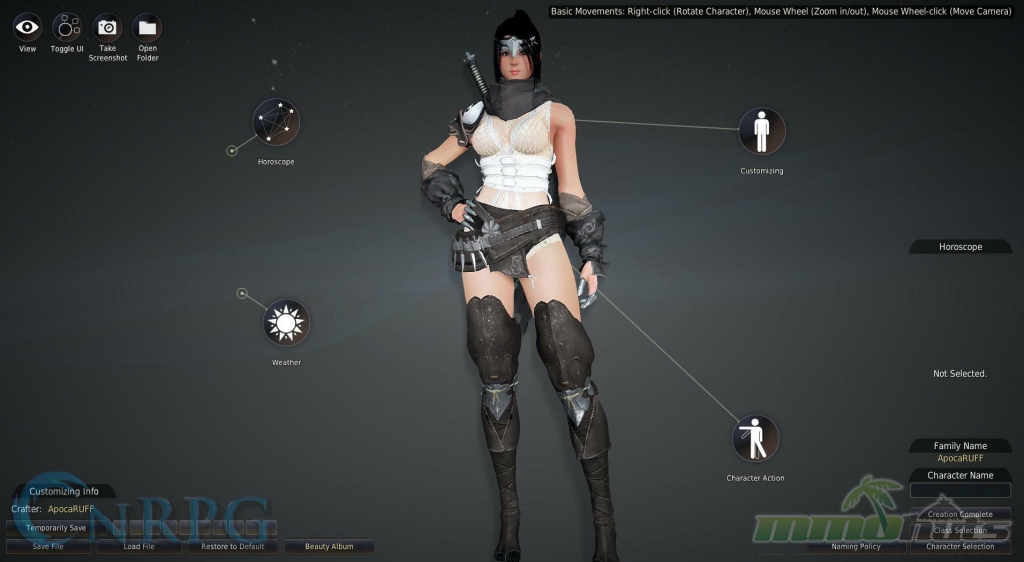 Busty and Scantily clothed, just as Naruto taught us female Ninja's should be.

I haven’t yet maxed out my Kunoichi, but so far the gameplay feels very smooth. If you enjoy doing a ton of damage and quickly switching between targets or taking down multiple targets at once, I have to say that the Kunoichi is only second to the Witch in terms of fun. I can teleport (in a fashion that looks straight out of Naruto) from a distance into a group of enemies, knock them down, proceed to slap them with a ton of damage and status effects (mostly knockbacks/downs). At this point I can either choose to give myself a speed boost to take down any runners or, if things are getting a bit too hot, I can throw down a smoke bomb and disappear, making myself immune to damage for a few seconds along the way. Mobility is definitely the name of the game when it comes to the Ninja and Kunoichi, with their double jumps, teleports, and various ways of escaping and chasing. It’s literally Naruto in a lot of cases. 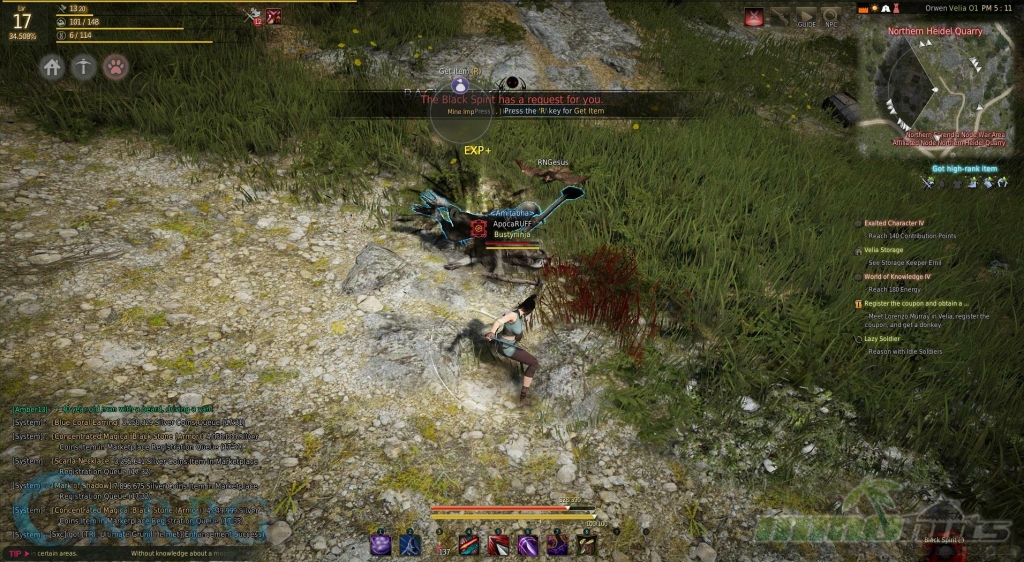 Lots of movement, with flips, double jumps, and teleports.

Siege Warfare is something I didn’t really get too deep into, unfortunately. It’s a feature that requires that you be part of a guild, and to be part of a guild you need to be active. Which I’m not yet. I’m thinking of starting to play actively again, but between my new-found love of all things Pokemon (thanks, Pokemon Go!), I find myself not wanting to spend time with a game that burned me once already. However, the game didn’t burn me nearly as bad as Trion and ArcheAge did, so coming back is a very real possibility in the future. And trust me, I’m thinking about it. 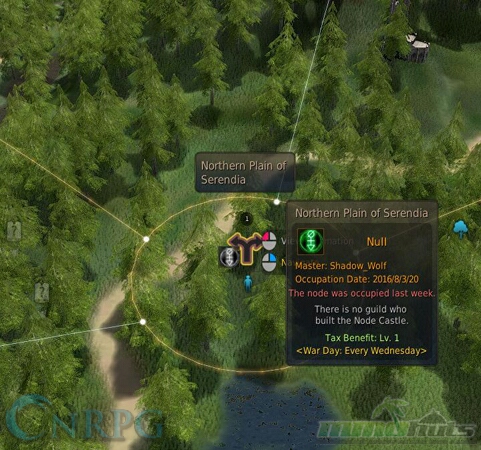 Each node can be controlled.

The Siege System/Territory Control is broken into two different types. Node Wars is the first type, which happen daily and are a very volatile thing with ownerships often changing between the nodes. The nodes are also very numerous, so there’s a chance that most guilds will get a chance to own a node if they make a real attempt at it. The real fight, though, happens in Conquest Wars. This is a weekly fight that requires strategy and tactics; your guild will have to work hard as this is where the best of the best compete.

If your guild wins the Conquest War for a region, you will get a massive leg-up in all things thanks to the taxation system. The system is a lot more in-depth than this, obviously. But thankfully Daum has created an awesome guide that will lead you to victory in six easy steps. I’ve provided the guide below. Really, though, the system IS huge and it requires more than a few paragraphs or a picture to fully grasp. Before you jump into the action, definitely check out said guide here. If you’ve been waiting for the Territory/Siege system before coming back into the game, I suggest you take a look at that link. The system is very rich with features and detail. After reading it I have to struggle to keep myself from jumping back into the game full swing. 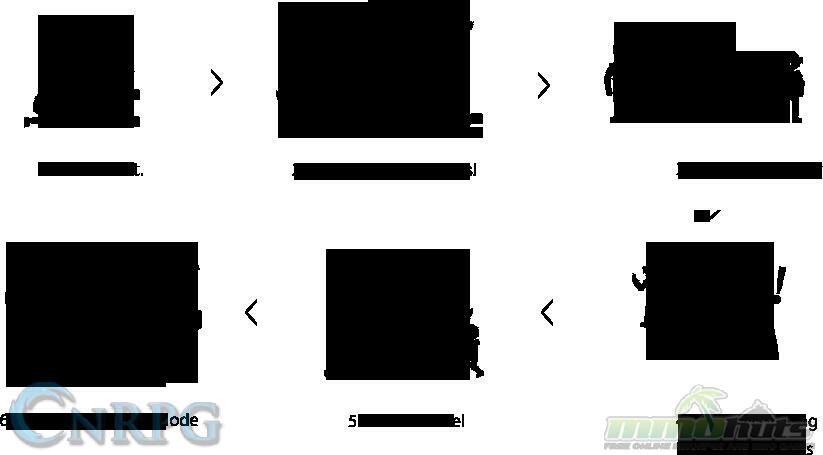 My favorite things so far are the removal of energy cost in processing AND removal of cost for resetting skills. It makes the game SO MUCH more fun. Where before I stressed over my build constantly, I can now focus on trying out new things and taking risk. Also, before the removal of energy cost in processing, I just couldn’t justify to myself the node system. My original dream when I came into the game was to set up a lumberjack empire in the Southern portions of ______. However, when I tried this I was hit with the cold reality of the game; Most of the raw wood I got was useless to other players and wouldn’t sell well. If I wanted to process it into more coveted higher-tier wood products, I would have to spend more energy than I had to make a profit in a reasonable amount of time. Grinding for an hour would net me many times more money than I could get in a week through the node system, either trading or selling to other players. It was upsetting and was a key reason that lead to me drifting from the game. 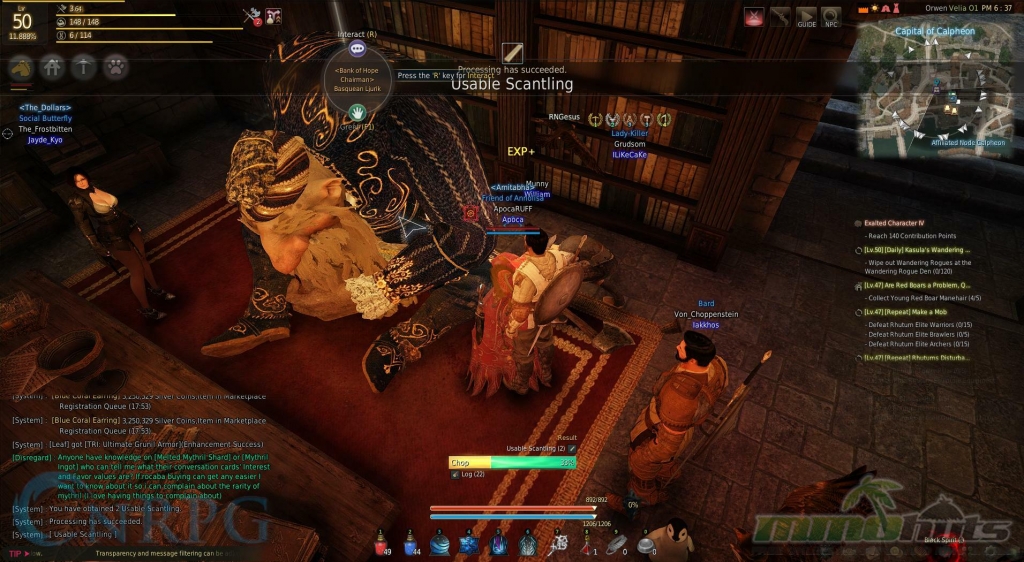 There’s also a few other minor changes that may skip the notice of most such as additions to the cash shop. Me being me, the first stop once I had the client updated and finally got into the game was the Cash Shop. Not much has changed; there’s a few new outfits, some new loyalty point options, and some enticing deals. Nothing too game breaking, at least compared to how it looked originally. 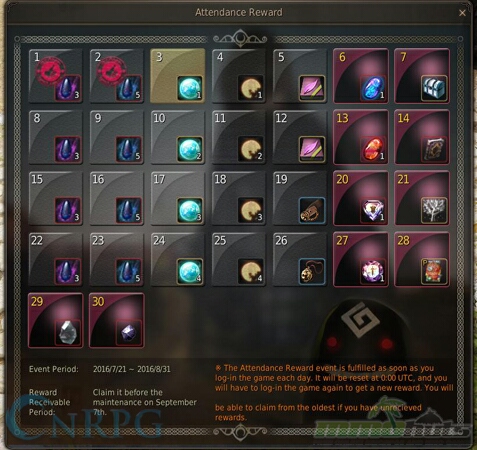 This is a nice addition to help encourage players to log in.

Now is probably the best time to come to the game. Processing no longer costs energy, there’s been four classes added to the game since launch, there’s now a log-in bonus reward system (though I have no idea how long that will stay), and there’s the Territory Control system which essentially doubles the content of the game and completely re-defines the PVP aspect. There’s something for everyone; the casuals, the PVPers, and the crafters. Sure, there’s still issues with the game, but they’re relatively minor from my perspective and Daum has shown that they will (if slowly) improve the game. I see no reason to hold a grudge and stay away from the game, and my conclusion is the same as it was when I originally reviewed the game: Great.