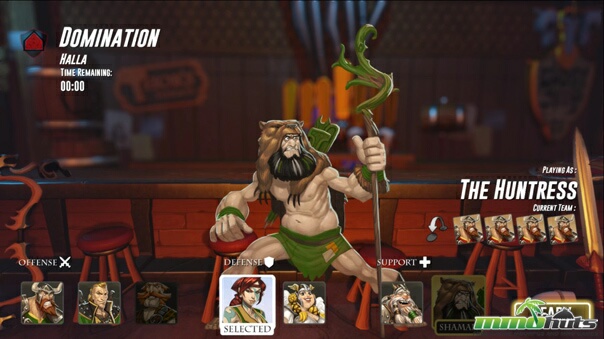 Most shooter style games feature insane guns, marines, soldiers, things of that nature. From the Industrial Revolution style work of Team Fortress 2, to the 1080p ultra-realistic graphics of Call of Duty and games of that style; Bierzerkers takes a considerably different turn: While the graphics are a little cartoony and light, the game features dead warriors, beer, and combat! They also answer the all-important question of “How do these men come back and respawn constantly?” with the location: Valhalla! This game takes place in Viking Heaven, where there are only two things: Beer and Battle! This title is still in its Alpha Stage, so there are bound to be changes, additions, and a steady slew of patches. Even over the last few days there have been a variety of updates to ensure the game runs smoothly in preparation for the July 9th Early Access testing on Steam! 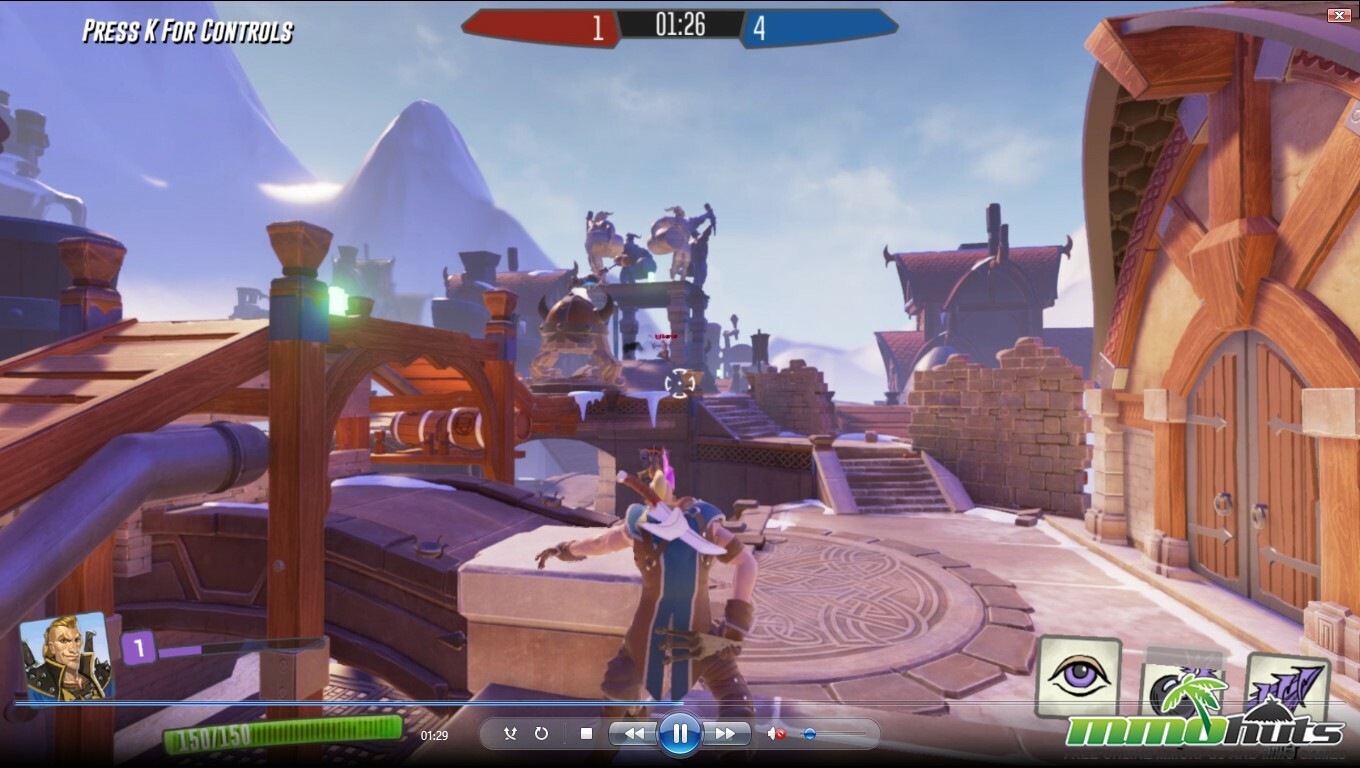 Though I praise them for making a controller option, I do have to say the default settings are peculiar and incredibly confusing. I found myself struggling to get comfortable on my Playstation 4 controller before giving up in favor of keyboard and mouse. The game is simple and easy to understand, light-hearted and fun with plenty of campy and clever references complimented by matching dialogue spread throughout. From the Scoundrel declaring “Ninja Vanish!” a’la TMNT: The Movie, to the Archer stating that she’s reading to “Kick Some Ice,” I was entertained and enjoyed the game for what it was: A pleasant team based game, focused primarily on melee combat. There are some ranged characters, which seem to be balanced around the easy to follow map design. Rather than getting crazy CC heavy to keep melee foes at bay, melee units have plenty of obstacles to hide behind, while ranged characters can leap around the map to stay one step ahead of their pursuers. Overall it felt like a nice balance of 3D platforming with tactical positioning. After a few matches, I found myself lacking the appropriate Adult Beverages to truly get into character. Once I entered the fray in the same state of mind as my character, the game became immensely more enjoyable!

Bierzerkers is a game of team-based combat; as of this writing there are two game modes I have experienced, a Team Deathmatch (first to 200 points), and a Team Battle Royale, which has a fairly short timer. The Deathmatch has no time limit. While you can’t change loadouts like most games in the genre, you can swap your character on respawn. With seven characters available right now, this is more than enough to keep each match feeling fresh. I imagine the roster will only grow with time. Unfortunately two characters (Highlander and Shaman) are still just concepts and unavailable for play, but the remaining cast was freely selectable for all testers in the pre-Early Access alpha. There are three styles of characters: Offensive (More aggressive style), Defensive (Mobile and utility), and Support (Healers/Tanks). The only support available right now drops a keg of beer that heals those near it, which leads me to the next point: 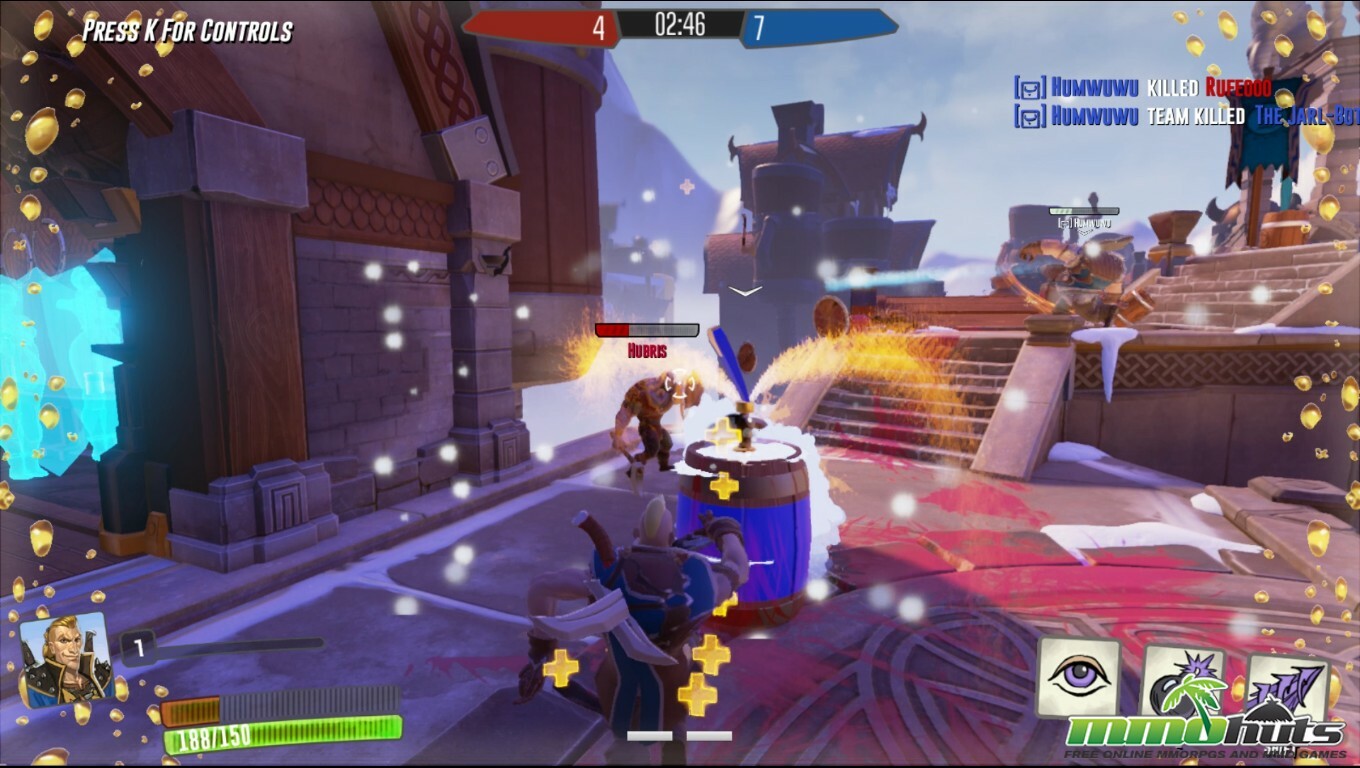 Alcohol and friendly fire? What ever could go wrong?!

This game has Friendly Fire! Why, you might ask? This is the afterlife! Heavy drinking is a part of the lifestyle in Valhalla, and so it makes sense that occasionally the players will damage each other, even if they’re on the same side! Though the maps have Chokepoints (A, B, C), the purpose of them is not really very clear at this time. They appear to bring in a slow, steady point flow, but other than that, it didn’t seem to make any sense why they are there. Based on Dizzy’s E3 meeting with the team, it seems most of their maps and mode types are still very much in flux, so they’re clearly just testing concepts at this point. The choke points only appear on the Team Deathmatch maps; the smaller Battle Royale maps do not appear to have them. Both are five on five though, and it is quite easy to see who is on which side. Those with a white name are on your side, red are the enemy!

Final Thoughts: Ready to Ride with the Valkyries!

There are a few other things forthcoming, such as skins and costumes, the usual monetization extras. This is a good indicator that the currently lacking customization options are certainly in the works. On the progression front I stumbled on “Bier Levels,” which serve no purpose right now other than to show how much time you have played. A dev playing in one of my matches confirmed it will have a more important purpose at a later stage of development though. There was only one major issue I had in the game, and it relates to the ranged attacks. As far as I have seen, ranged abilities fly the entire length of the map, until they hit a target or some obstruction in the way. I cannot always tell if I have landed one of these ranged blows, but there are not all that many ranged attackers, so it should not be a huge issue, but one I hope will be addressed. It differs from arena style MOBA games in that there are no minions, no character levels/skills to enhance. It’s just team on team combat, and it’s all around quite enjoyable. The devs were with us playing, and are paying attention, so I am curious to see how this particular game grows. Even in the Alpha it’s quite pretty, and doesn’t require reading a novel of game guides to stand a chance competitively. The story is as simple as it gets; the Gods grow bored, and are pitting great combatants against one another! This is keep it simple, stupid gameplay meant for LAN parties and guild warfare on a hilarious level that only the true tools of the Internet could take serious enough to get mad at.

Are you ready to ride with the Valkyries, and enter another realm, one filled with beer and battle? I know I am! Check them out on Steam Early Access starting July 9th!