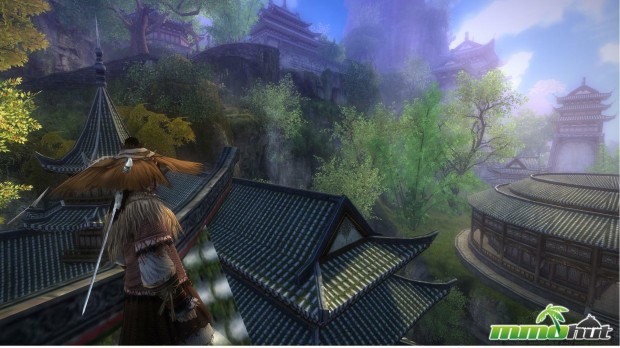 At last comes Age of Wushu (Age of Wulin originally) to the North American & European markets after receiving much praise during its original Asian release for its history-inspired Wuxia universe, its complex but fulfilling gameplay, and its lack of levels. There is little question that Age of Wushu is a title to be taken seriously. However, there have been some very serious differences in game making philosophy and preferences between developers in America and Asia. The question to ask is; can Age of Wushu cross this divide in order to conquer the hearts of occidental gamers?

For a start, and before we touch anything else, let’s address the mammoth in the room; Age of Wushu is free to play, but it relies on a time limit system rather than a content restriction. Specifically, you have 10 hours of play time in a single block, then you get 1 hour a day. If that sounds very limiting, that’s because it is. Unlimited access is on a subscription basis, at 10$/month, but we’ll touch more on this towards the end of this review. So with that said, let’s get on to the thick of it. Age of Wushu gets you started creating your character, and while it all looks really good, there’s not all that much to choose from as far as customization goes. There are a few starting areas and storylines to pick from, however, which does in a way make up for it, considering the sheer amount of content per starting area. Choose carefully however, as you’re allowed only one character per account! Once you start playing, two things come to mind; for one, this game doesn’t look all that bad! The vivid, simple graphics and the soundtrack come together nicely to complement the experience in order to create a living, fantastical yet historically-focused and believable world. The in-game universe is even more interesting when you realize that characters never really disappear. When you log off, your character simply picks an occupation, and continues their life in-game. The second thing is, inevitably, the sheer and sometimes needless complexity of some of these systems.

Age of Wushu has a lot of content – with many different systems, from fighting, to progression, to crafting. But one thing that ties them all together is needless complexity. Even with the few tutorials in place, it’ll take you a bit to figure out some of the finer aspects, and most likely a bit of Google searching. The upside to this is that this is a very large and complete game. While it’s at the core a kung-fu fighting game, it’s actually a sort of big sandbox where just about everything you do gives you experience points. While you’ll most likely always do fighting in one form or another, the rest is entirely up to you, whether that is crafting, PvP, or questing. In essence, fighting works on a rock-paper-scissor model, with overt attacks beating feints, feints beating parries, and parries beating overt attacks. This requires not only timing, but also a bit of intuition. The way it’s put into application is a bit odd however, and while fighting should feel fluid, it’s actually quite stiff, as moves will stop you from moving for a moment while you perform them. Some powerful overt moves will even hide your interface while being performed! There is however a lot of variety in moves and styles, with special group moves, buffs, and movement skills (flying uncluded), which is definitely one of the game’s high points. You can match those as you want, potentially creating some very interesting combinations. 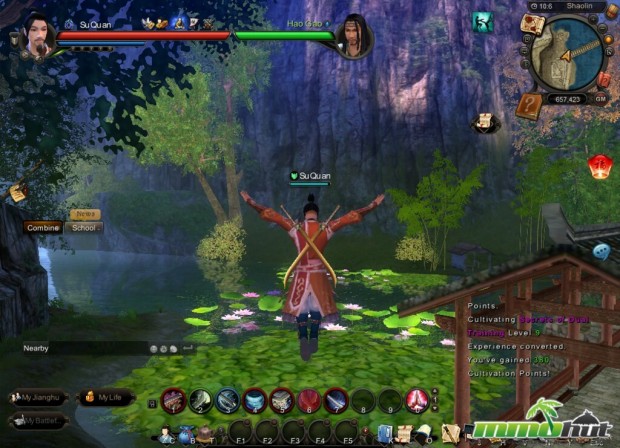 Once you’ve got a few quests under your belt, you’re introduced to the progression system. In short, as you play, you earn experience. At a pace (depending on whether you’re a free-to-play player or a VIP), your experience gets “cultivated” into cultivation points, which can then be used to train your skills. Experience is cultivated at different speeds depending on the activity you’re doing, with five different levels of conversion. In addition, if you’re not a VIP player, a part of your experience instead gets converted into “potential”, cultivation points that can only be unlocked by subscribing. Similarly to EVE Online, leveling your skills is on a timer and takes a long, long time, thankfully continueing even as you’re offline, unless you’re willing to dish out in-game money to save time. Yes, it’s complicated, “grindy”, and we were often left wondering; why don’t they just convert experience to skill levels at varying rates? Skill levels? That’s right, Age of Wushu has no “levels”; your power is measured mostly by the level of your skills, and the level of your internal skill. In a way, the level of your chosen internal skill is actually your level, as it controls your stats. This also lets you prioritize skills at your discretion, and rewards a bit of research. Of course, this might be easier of the game had been properly translated, and though the translations can lead to some hilarity at times, some sections of the game are almost entirely unintelligible, story quests being one of them.

Among things to do are questing, which can net you some interesting items and techniques, crafting, and PvP. A bit of questing is definitely required, and essentially consists of your regular go-there-do-that routine, with a lot of badly translated dialogue added. Crafting, on the other hand, consists of straightforward crafting, and individual mini-games that reward you with a chance for greater rewards. As an example, you might be trying to outmatch an opponent in a board game, or simply trying to improve one of your creations through a game of Bejeweled. This is actually pretty fun, rewarding, and addictive! And even better, it’s also entirely optional, though some crafting skills can be required to join some specific schools. PvP, on the other hand, bring in the school system. Each player eventually joins a martial arts school, some good, some neutral, and others evil, which will enable them to learn new techniques in exchange for working for the school. This has you doing a variety of missions, from spying on the enemy schools, fighting them in raids or outright kidnapping an opponent! And be warned, PvP is entirely open world, which means that once you make enemies, it’s open season. Players can also be elected to have specific roles in the school system, in theory allowing a top player to declare war on other schools.

That’s not to say that all is good and well however. There are some severe balance issues, mistranslations, and bugs. In addition, the 10$/month subscription gives the subscriber some very solid progression advantages. What really cripples the free-to-play player is the time limit(10 hours in a block, then 1 hour a day), which can almost entirely negate the aspirations of serious, yet non-paying players. One hour a day is very little in the very time-consuming world of Age of Wushu, and for the most you’ll be funneled into paying, or leaving, unless you’re willing to keep your playing sessions brief. And there’s definitely nothing worse than being kicked out in the middle of something you were enjoying. That’s not to say that this doesn’t have its advantages; free to play players have access to the entire game… As long as they’re willing to hurry up about it! The in-game store, thankfully, consists mostly of aesthetics, ranging from clothes to weapon skins, paid through a special gold currency. Nothing out of the ordinary or unfairly advantageous there, but the subscription benefits are already quite a head start for subscribers anyway. 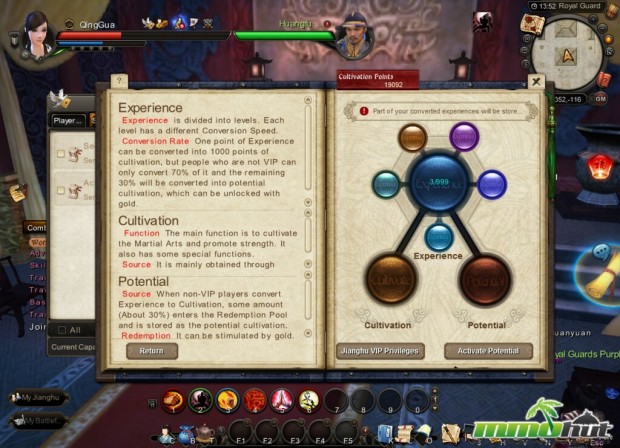 While Age of Wushu has some persistent issues, they are very small compared to the sheer fun of martial arts combat, mini-game driven crafting, and the expanses of an ever living universe in which history and myth join up. There’s no denying it, this is not a title for those new to the genre, or unwilling to do a bit of research beforehand. But if you’re determined, enjoy traditional Chinese-style wuxia dramas, or craving to play a good kung-fu MMO, then you should not skip Age of Wushu. Even better; you’ve got access to all of it for free for as long as you’re willing to respect some time restrictions. In any case, this is a game that is bound to make some ripples in the free-to-play market, and that will be around for years to come.