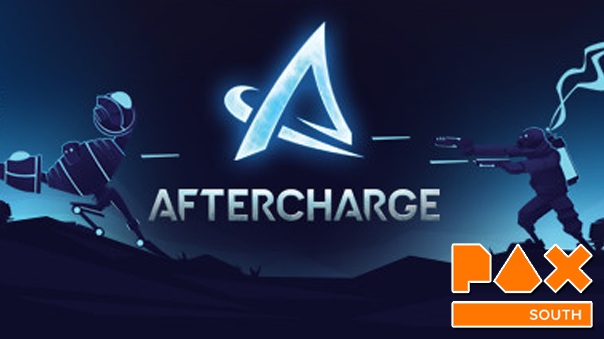 Just how well can a squad of scrubs fare against a seasoned team of developers at their own game? Unsurprisingly, not well at all.

In the last few minutes of my PAX South 2018 adventure I got to face off against Aftercharge’s development team with two other people I’ve never met before. In short, we got destroyed and I walked away disappointed. However, I wasn’t distraught because I lost, but because the playing the game itself was not an enjoyable experience.

Basically, Aftercharge is a 3v3 asymmetrical multiplayer battle arena pitting invisible attacking robots against defending armed scientists. The game ends when either all three robots are downed, or all three generators are destroyed. While straightforward, achieving the win condition is much difficult and boring than you might think.

For starters, playing as a scientist is often painfully dull. Your enemies, the robots, are always invisible unless revealed by attacking a generator, being too close to a friendly scientist, or getting hit by a stray grenade or bullet. Effectively, they control the pace of the match and can traverse or hide around the map at their leisure while you sit idly by twiddling your thumbs waiting for something to happen.

And when they do muster up an attack, its nigh impossible to guess when or where they’ll strike and impractical to chase them when visible because their teammates will freely attack elsewhere. But maybe you get a good couple shots off and they go down – success! Except one of their buddies destroyed a generator in your absence. While you run over to help defend, that felled robot is revived once again for the cycle to start anew.

Being at the complete and total mercy of another team’s pacing is infinitely frustrating. Sure, you have some helpful abilities and generally a high firepower output, but it’s all in service of hoping the enemy makes a mistake. Granted, that’s not a problem unique to Aftercharge, but of asymmetrical multiplayer games in general.

On the other side of the court is playing as the robots which is immediately more interesting, freeing, and strategically diverse. You have significantly more options available to you now that you’re the one deciding when and where the action happens. Then one big ugly problem rears its head, the lack of coordination, or otherwise going up against a coordinated team, is an absolute nightmare.

Tactical maneuvering to win aside, you can be taken out of the game entirely due to unresponsive teammates after a getting caught out. As bad as being a scientist is, you’re always playing and making movements, but if you go down as a robot in a bad team you might as well quit out of the game since they likely won’t bother reviving you.

All of this culminates in the biggest issue: the lack of cooperating team members will make or break your experience. And as I experienced first hand at PAX, that in combination with going up against a good team is soul crushing.

Let’s say you did get a couple of friends together to play a few matches, what are the chances you’ll go up against someone equally organized? Due to the various hurdles, probably pretty low. Accordingly, you’ll stomp the other team making for a game that wasn’t fun or fair for either side.

But what makes this game different from CSGO, DOTA, or Evolve which all ideally desire open communication? From my experience, Aftercharge seems to hinge too much of your success on player-variance or well-timed teamwork. In CSGO, its not especially uncommon for one person to overcome multiple enemies since all it takes is a good aim and smart map movement; similarly in DOTA or Evolve, you can rely on other factors to make up for a teammate’s shortcomings – many factors of which are not present here (like farming well to overpower yourself, buying time with turrets, good use of powerful abilities, less impact of bad teammates with more members in general and etc).

I also unfortunately feel like this problem only gets significantly worse with the lower playerbase I expect this game to have. The gameplay is slow and lacking excitement while being dressed up as methodical; the visuals, environment, character models, and effects are soft, generic, and entirely forgettable; and the reliance of actively participating in voice chat will be too much for the average player. Even at its very best showing in a local tournament environment, I still came away despondent and that’s a terrible sign for this game’s future.

Still, there’s a long way to go in Aftercharge’s development cycle, maybe they can turn this ship around with various tweaks including making it more solo or casual friendly, but I won’t hold my breath.