Tribes at War Closed Beta Begins in Indonesia and the Philippines

37Games has announced that its mobile MMORTS, Tribes at War, is entering closed beta in Indonesia and the Philippines, with a global release to follow at a later date.

Tribes at War is a real-time MMO strategy mobile game with a charming pixar-like art style set in a long ago age. Brought to you by 37Games, Tribes at War boasts many features such as recruiting troops, upgrading your Chief’s Hut and one main feature of the game: Dinosaurs! Use these dinosaurs to crush your enemies, see them driven before you and hear the lamentation of their women!

Tribes at War gives you the ability to not only train a force to be reckoned with, but to upgrade them, with better weapons, stronger armor and more fearsome dinosaurs. Not only does upgrading greatly increase your chance of victory, but it has a visual effect too. Watch as your troops go from riding a cute raptor to riding a fearsome dinosaur covered in armor that is likely to strike fear into the hearts of your enemies.

Manage your troops before a battle, what is most effective? Should you personally lead the charge? What Dinosaurs (namely Saurpets) should you bring with you? This is just one aspect of the game you have to consider. Once your weary troops have returned and are resting at the infirmary, you can then get on with managing and upgrading your territory. 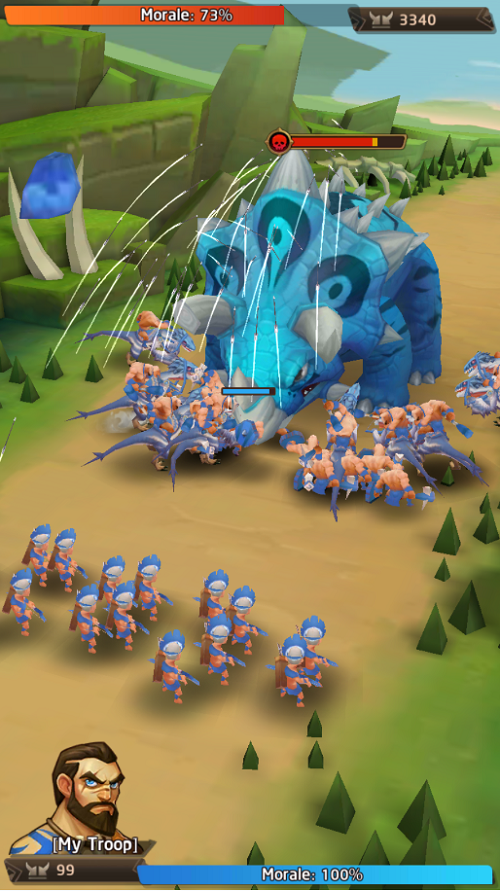 Upgrading your Chief’s Hut and other buildings will only benefit you, rewarding you with Wealth Sigils and improving your Combat Power, as well as bolstering your defenses. PVP is in the game so buffing your walls is a must, either by upgrading them or setting up some deadly man-eating plants!

Dinosaurs, namely Saurpets, are scattered across the lands, waiting for you to defeat them or capture them! Defeating them will reward you with various special resources in which you can use to upgrade your current Saurpets, or you can capture them and add them to your arsenal. Another big feature is the spectacular Sauroi! These magnificent creatures reside in your territory and offer you many different abilities to be used in or out of battle. The first one you start with is a grand golden dragon! Use these to turn the tides of war, or to simply speed up your building!

Players will have a multitude of things to do and there is never a moment of boredom in Tribes at War! 37Games is at the forefront of mobile gaming and has many successful games from every genre.

Find it for free on Google Play.