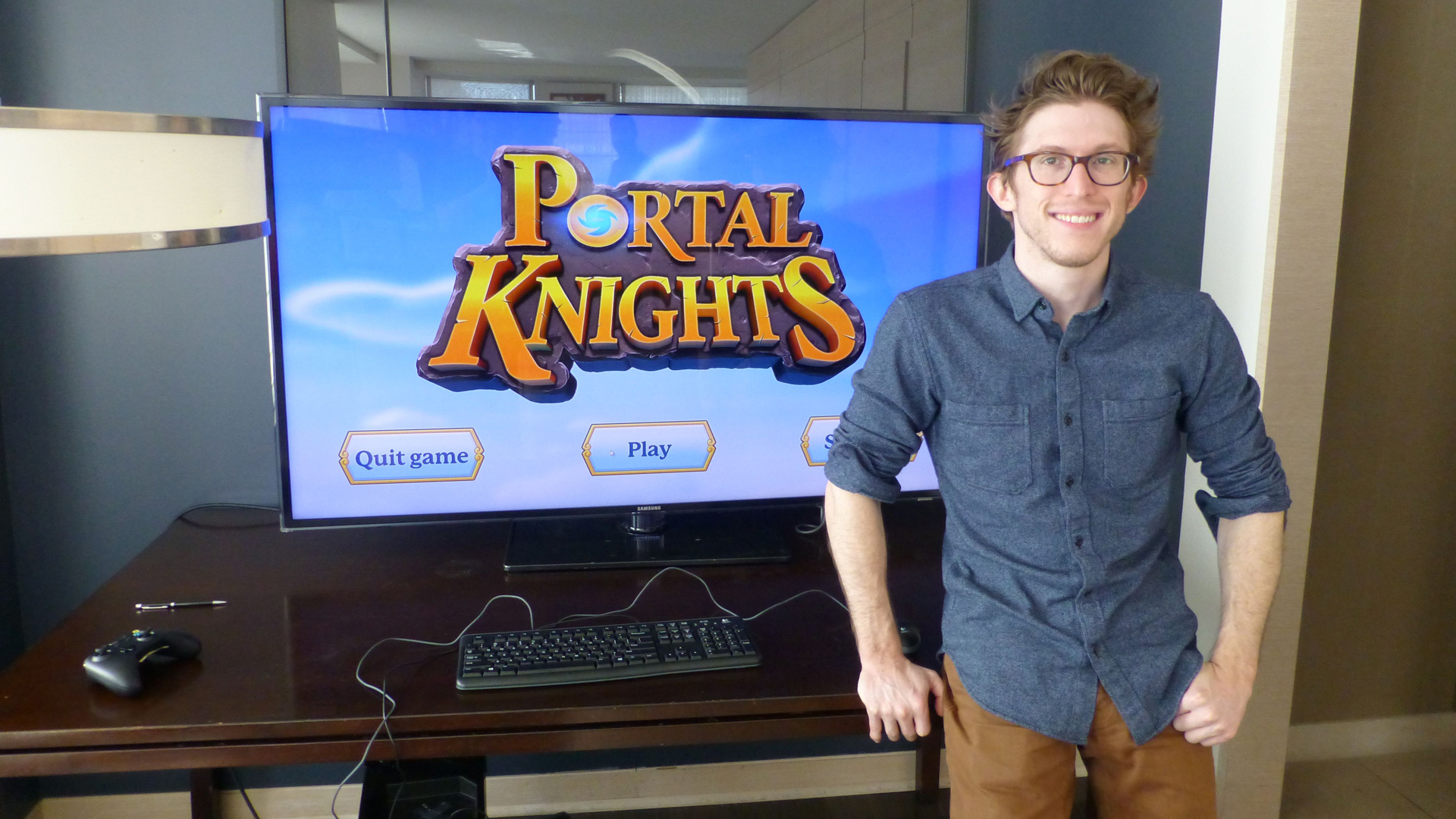 Earlier this week we were invited to the St. Regis Hotel in San Francisco by 505 Games to check out a few of their upcoming titles – here’s what we got to see and play.

First up is Portal Knights – a sandbox adventure-RPG that straddles the lines between The Legend of Zelda: The Wind Waker, Minecraft, and Terraria (another 505 Games title). Those aren’t just our words – Creative Director David Welch (pictured above) embraced the comparisons of Portal Knights to other adventuring and sandbox games, which is notably unusual for developers and publishing houses. The development team, Keen, has been working on Portal Knights for a few years now and it really shows. The graphics and interface are a polished layer atop of a rather robust combat, crafting, and camera system. Just like other games in the genre, Portal Knights has all the usual features like mining, crafting, exotic biomes, bosses, procedurally generated worlds, single player and co-op, weapons, armor, light story elements, and a modest level of character customization. However, this features list doesn’t explain the whole game – Portal Knights stands out from the Minecraft clones in far more striking ways. 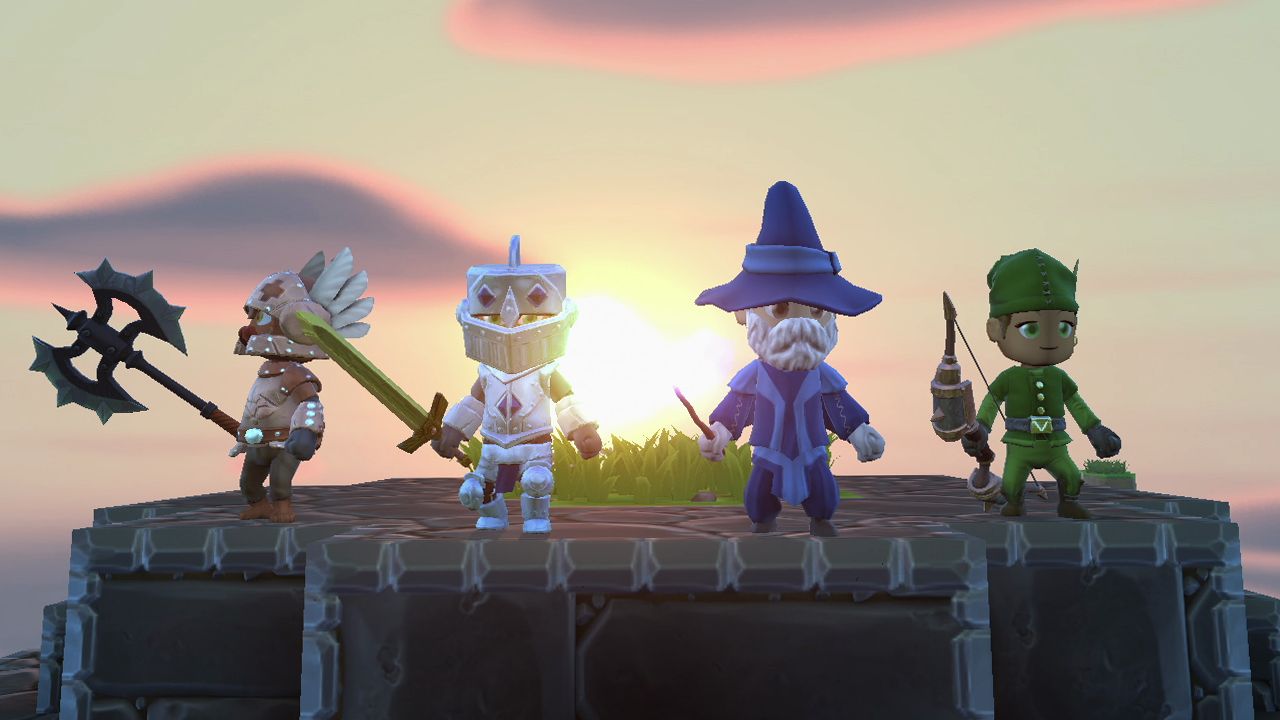 Gather your party – you’re about to have an adventure.

The main differentiator between Portal Knights and other games in the genre is the emphasis on combat and the character classes. This game has combat pretty much nailed down – lock-on targeting, enemy switching, health bars, enemy variety, weapon handling, armor stats… nearly all aspects of the combat follow tried and true methodologies. Anyone familiar with the 3D Zelda games will understand how the lock-on system and camera operates, and those experienced with Terraria will jive with the multi-tiered crafting system that focuses on the archetypical Melee, Range, and Mage classes. Unlike most sandbox-y games, Portal Knights has actual classes and character slots allowing for specialization and easy character switching. 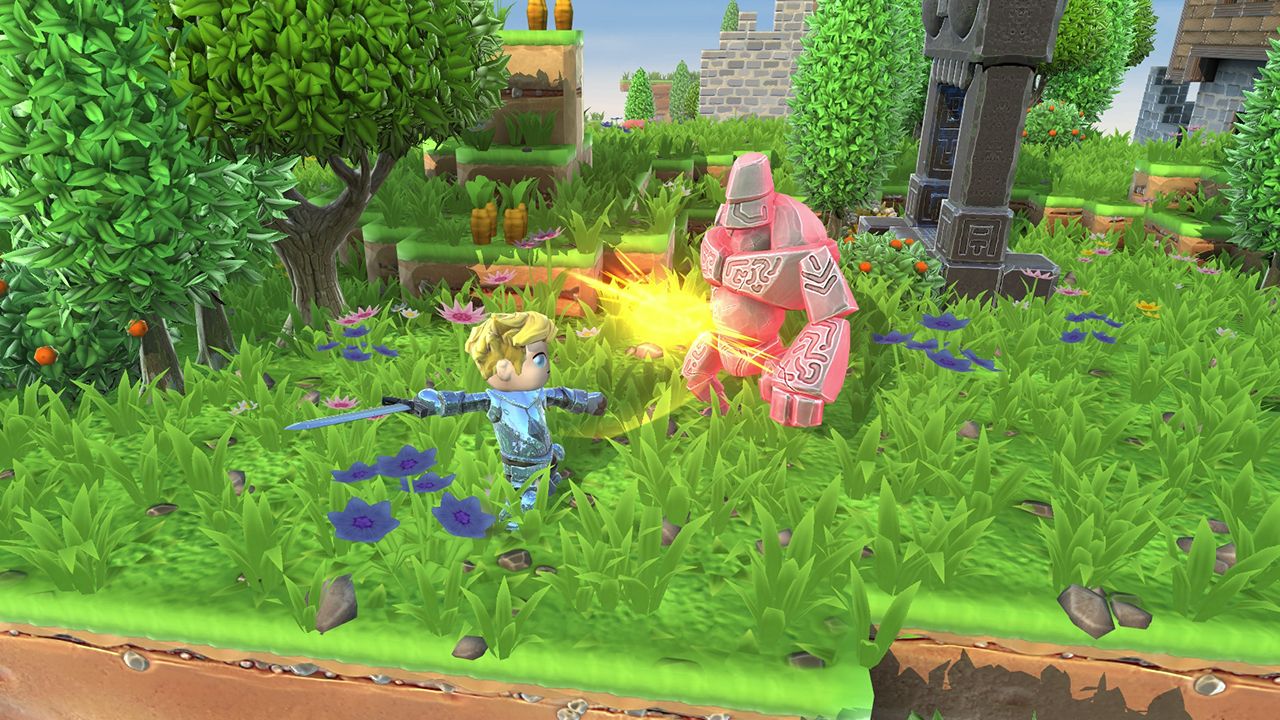 Whack it until it dies. Or until you do.

Traversing the world is also unique, which involves rebuilding teleporters between fragmented landmasses in order to reach new areas, bosses, and dungeons. Players can teleport to their home easily if they get stuck or need to return from a resource collection run, and they can teleport back to any previously visited location from the map screen.

Other differentiators include a gentler learning curve with a combination of tutorials quests, easily accessible crafting recipes, and reasonable ingredient collection requirements; you probably won’t be needing a wiki with this one. The graphical style and animations also set the game apart – you really don’t get games looking this polished and ready-to-go in Early Access very often. Finally, the way the world is generated and updated: David Welch explained to us that the way the world is generated is both procedural and modular so the game can receive updates and new content extremely easily without breaking every player’s uniquely generated worlds. 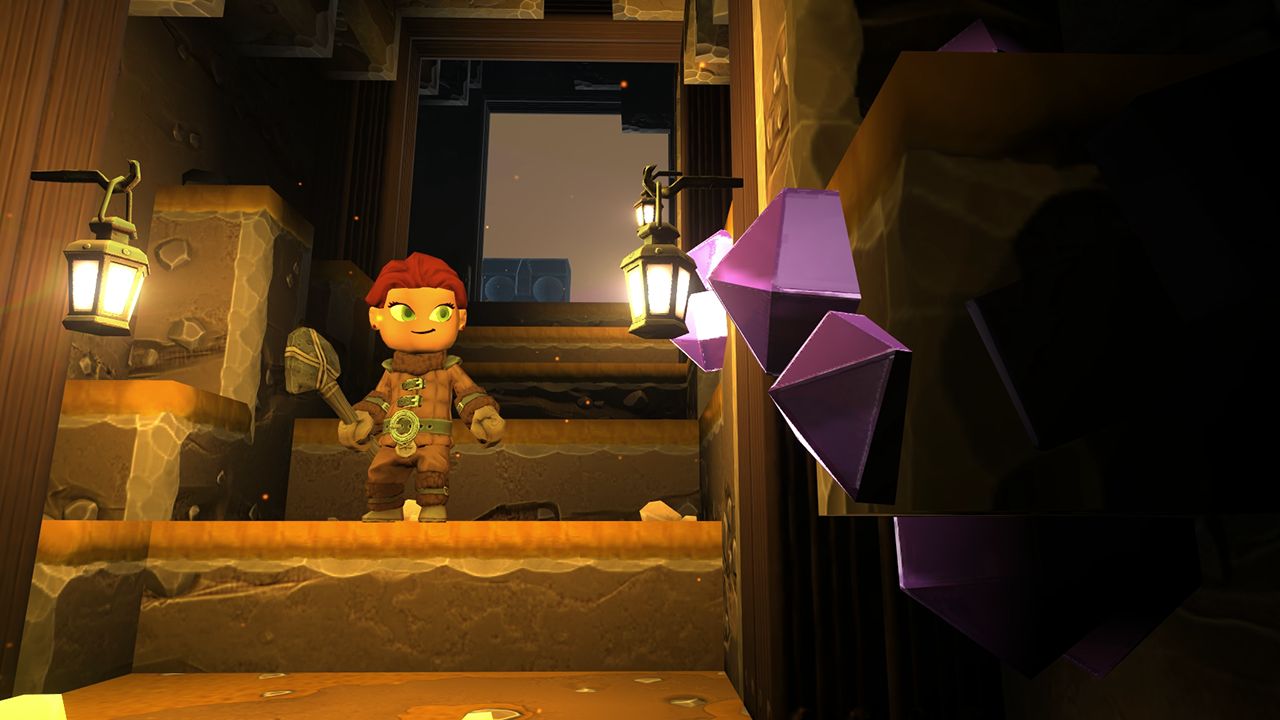 All is not perfect from what we’ve seen though. The interface, while polished, feels too mobile-centric with oversized UI elements, animations involving movement can get stuck, and, like Terraria, only one player can access a chest at any one time. These issues are really minor, and will surely be ironed out before the game’s full release.

So far, everything about Portal Knights has us excited about it, and we’re really looking forward to seeing how it takes on the incumbents. Reiterating, this one is different because of the level of polish it’s starting out with and all of the unique spins on the genre. 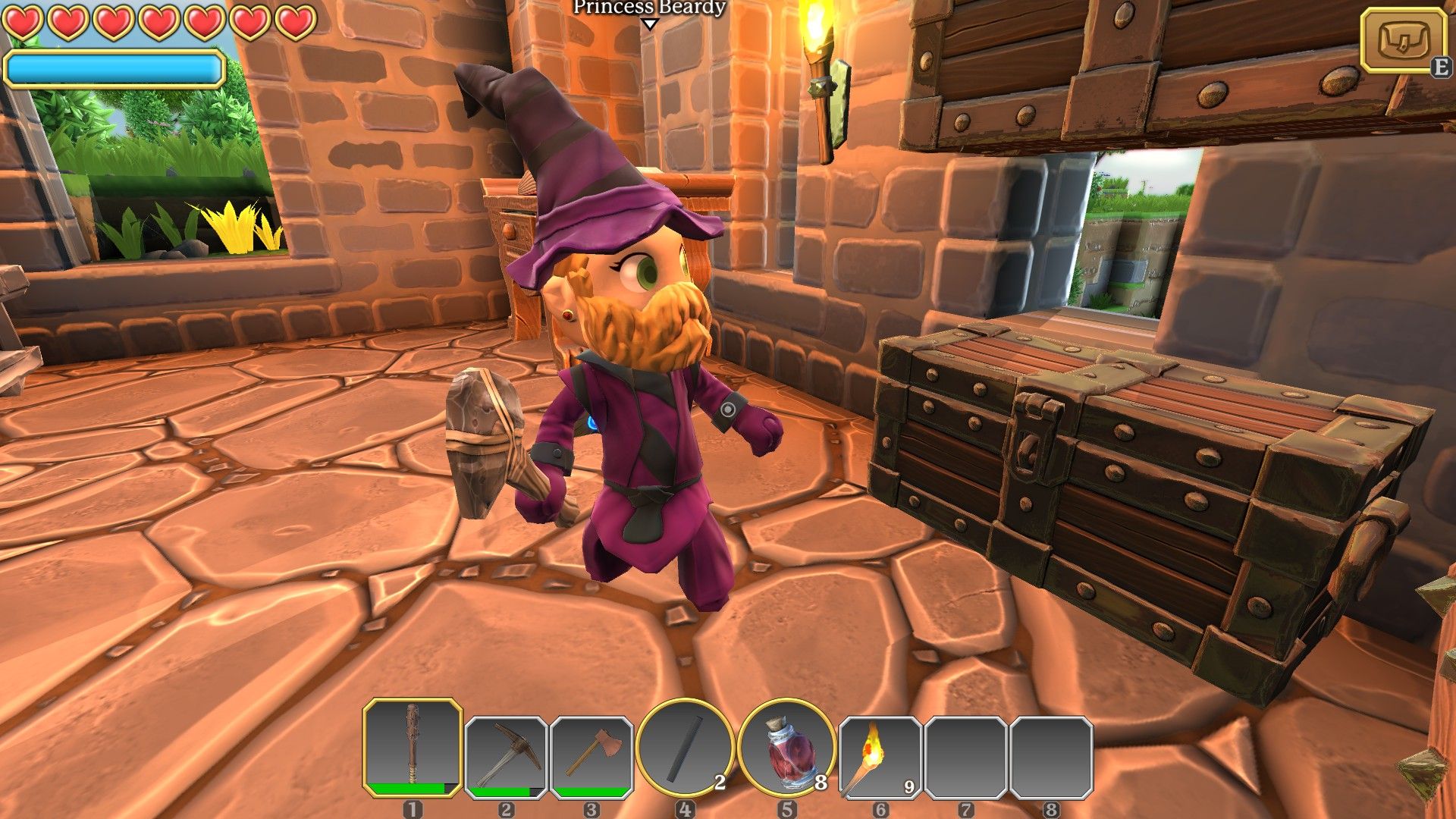 Beards can be donned by both males and females – awesome.

Portal Knights just released on Steam Early Access, so if you like crafting adventure games then you really ought to take a look.

ADR1FT is Three One Zero’s first game, which sounds scary, but the members of the team are veterans of the industry. Loosely falling into the horror-survival genre, this first-person adventure game follows a lone, amnesiac survivor of a derelict space station orbiting the Earth. What happened? Well, that’s the game. 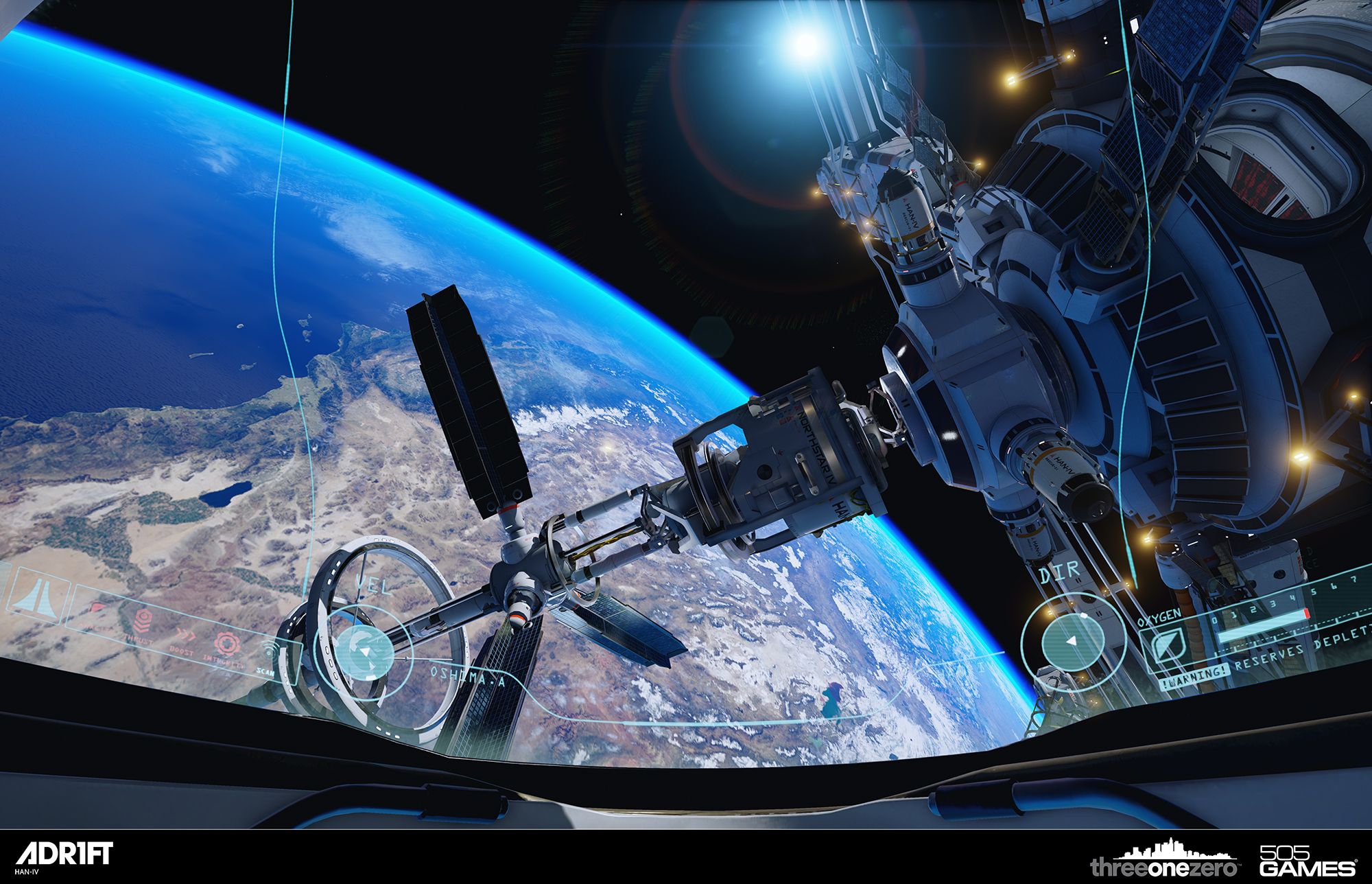 That’s the Earth… contrary to popular belief, it’s round.

We played this on on the consumer version of the Oculus Rift, and wow, it sells the Rift as a must-see-to-believe device. On both a normal monitor and the Rift ADR1FT is drop dead gorgeous. Playing the game itself feels like a cross between Mirror’s Edge and Shattered Horizon with a little bit of Amnesia sprinkled in. The main mechanic of the game is oxygen – go figure, because oxygen in space is rare. Your oxygen supply is shared with your health, your movement, and your ability to traverse obstacles all while your damaged EVA suit puts you under a deadly time pressure. 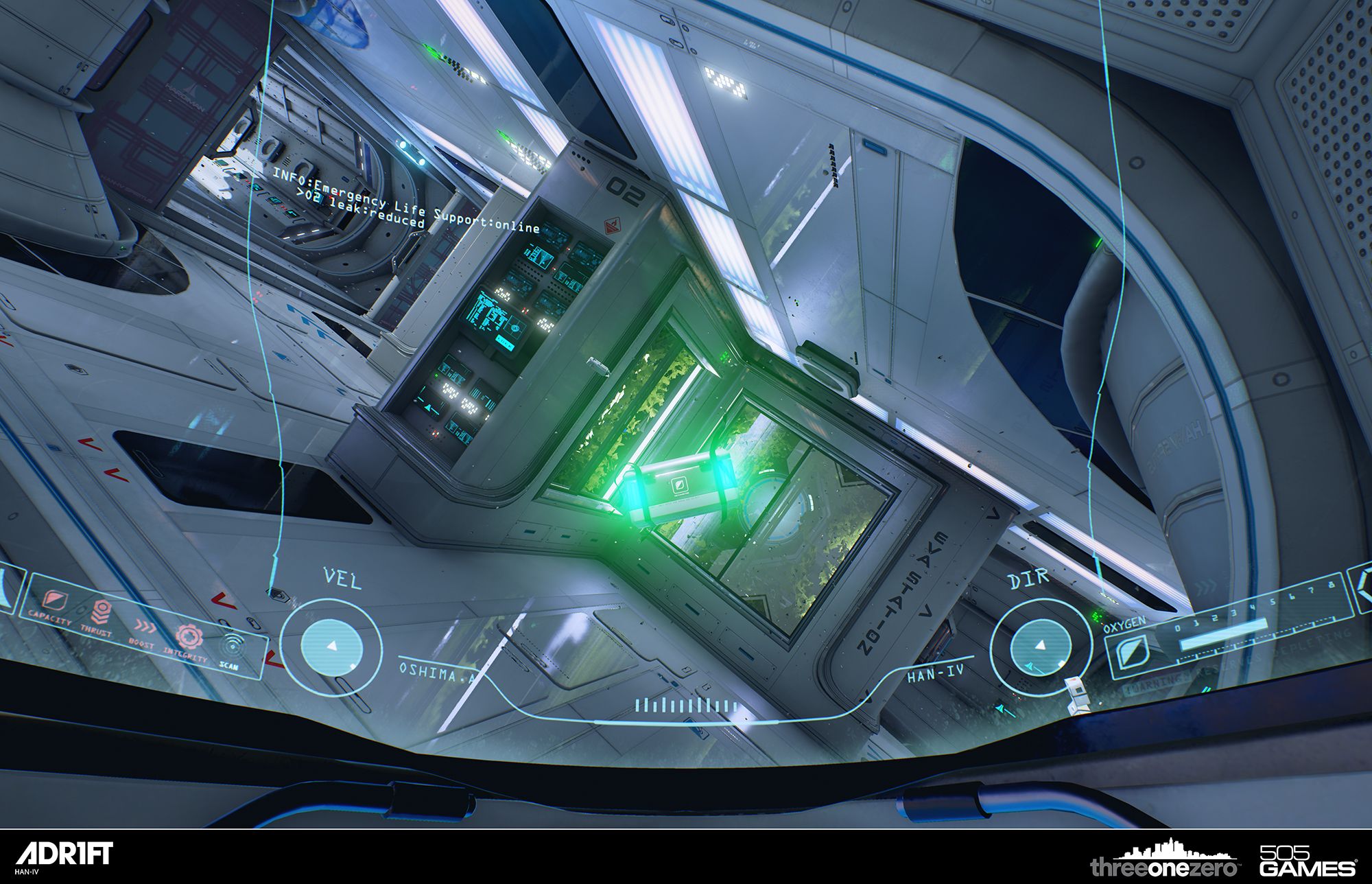 Your life depends on collecting these oxygen canisters.

In our time with ADR1FT we bounced around a capsule to learn the controls and orient ourselves with how VR handles, and then spent a good 15 minutes exploring the damaged space station while collecting oxygen bottles to survive. The sights and sounds of ADR1FT are very assertive – vistas are expansive, the sound is very bass heavy, and the muffled creaks emanating from the wrecked station are eerie. Sort of a side note: Much to our surprise, the built-in headphones of the Oculus Rift are actually good; they’re not studio grade, but they’ll give your $75 Sennheisers a run for their money.

ADR1FT is one of the few games out there that offers full freedom of movement: strafing, pitch, yaw, and roll. Controls are bound, in our opinion, very sensibly to the Xbox controller layout, and they’re pretty easy to get the hang of if you’re familiar with aircraft in first person shooters or games like Elite: Dangerous. The level designs are reminiscent of games like Outlast and Amnesia, so fans of those games should give it a look. 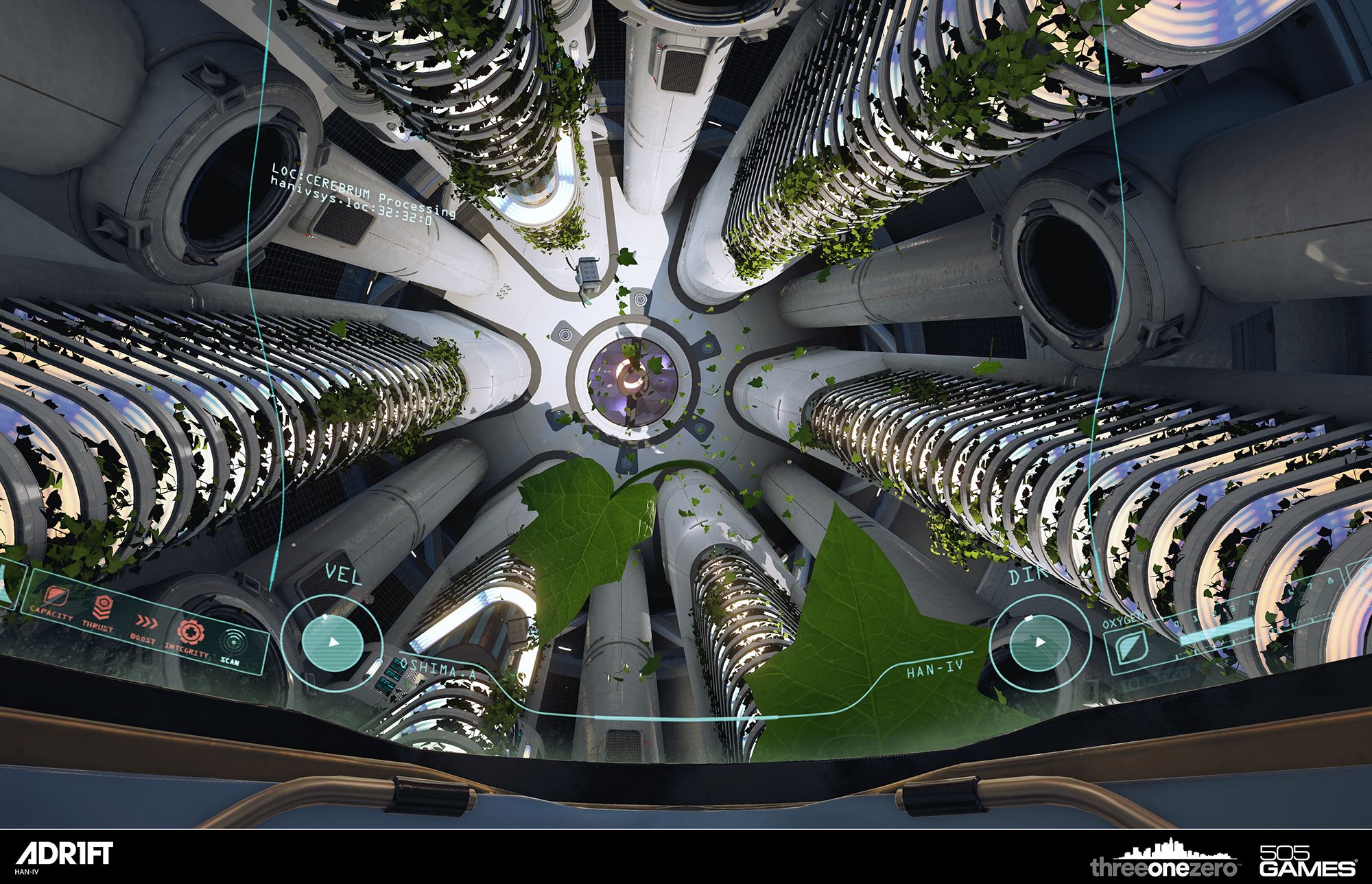 Some parts of the station hold organic materials – with VR, the leaves floating by very nearly feel real.

Again, ADR1FT is a fantastic looking game and we think it’ll do well among the other narratively driven first person games that have come out these last few years. We’re overall very impressed with Three One Zero’s first title and look forward to its release.

ADR1FT will be releasing for PC on March 28th, with Xbox and PS4 versions sometime later this year.

Our time with The Guest was very short and it’s not something usually up our alley, but we’ll try to provide our initial impressions on it anyway without spoiling anything. 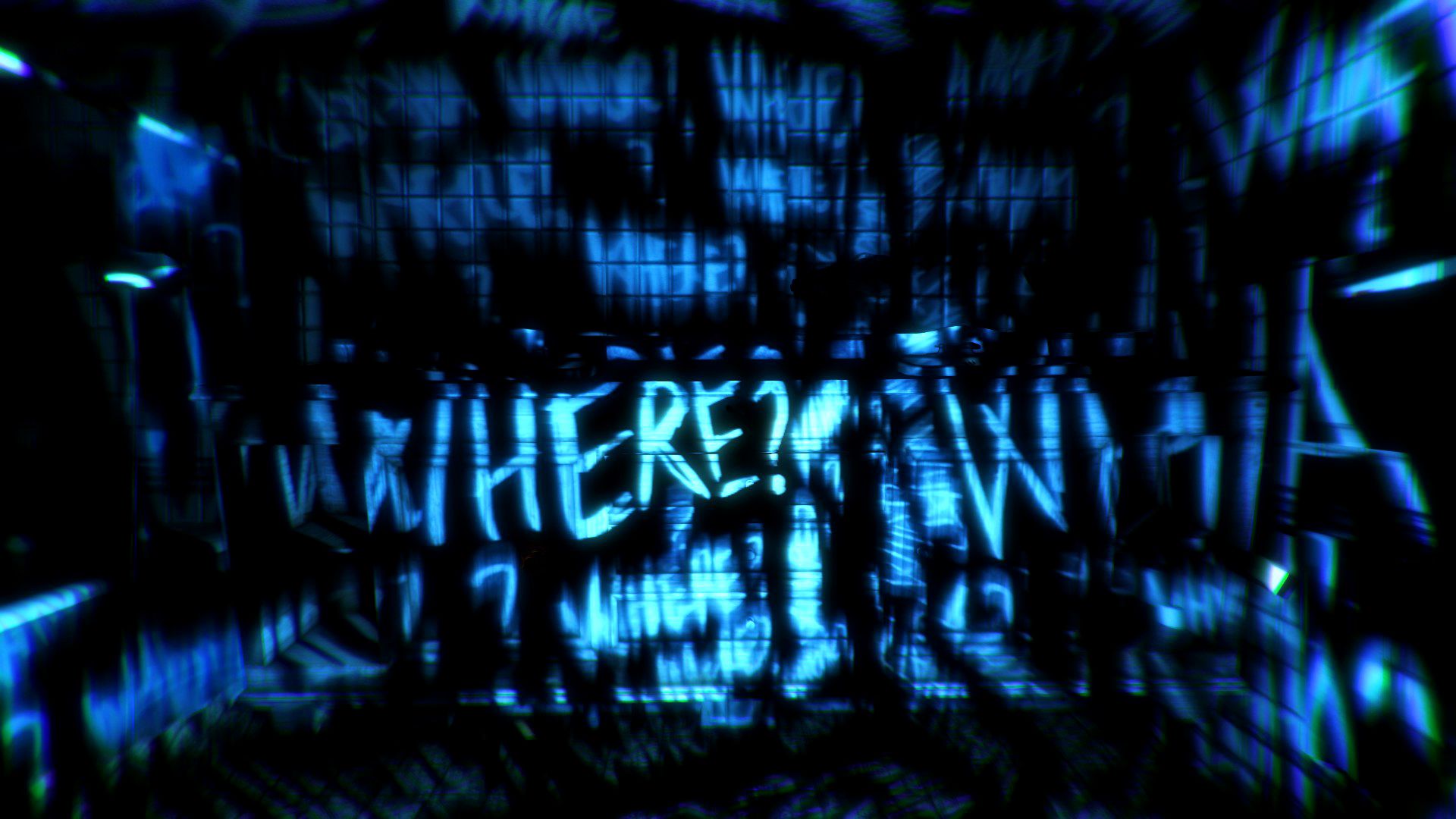 Not what I want to see when I walk into the Men’s Room.

Hailing from Spain, Team Gotham has created an atmospheric story driven first-person puzzler that seems to take a lot of inspiration from games like The Room and suspenseful horror films. The game takes place in a hotel and starts off in a bedroom where the main character wakes up and finds himself locked in and locked out of everything. With the drive of figuring out who locked you up and why they did it, you immediately find yourself solving puzzles to open doors, finding lightbulbs, using tools, and doing many other things to make your way through the darkened hotel.

The puzzles we solved were more modern in their solutions rather than retro and try-everything-with-everything else; the solutions made sense, and we’re thankful for that. Notably, a surprising number of objects in any location can be picked up, inspected, rotated, and pocketed for further use. It’s sort of kleptomaniacal, but that’s what a lot of games have taught us to do over the years anyway. 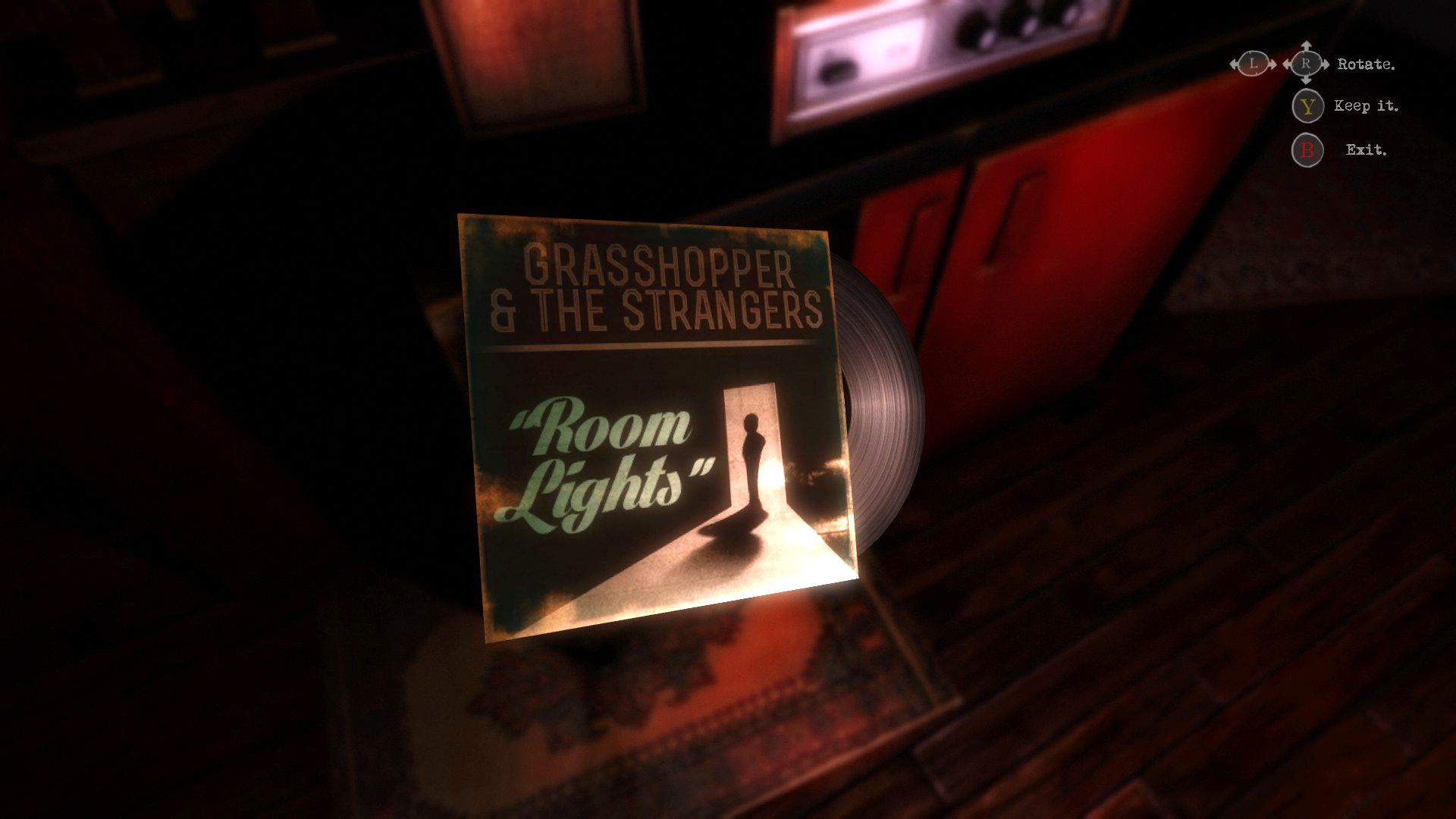 Lots of things – even the incidental – can be examined closely.

Stylistically the game looks realistic, but also a little too dark, and the movement speed feels slower than it should. Also, oddly, the character felt shorter than he should have in relation to objects like dressers and closets; perhaps it was the lighting, but something felt off. The controls were very simplified: typical WASD movement and mouse aiming, but all interactions with objects and using them involved Q and E instead of clicking and dragging them. Perhaps this is for accessibility, but it didn’t feel quite conventional.

None the less, The Guest was entertaining and interesting. We may take another look at it in the future when it releases. The Guest will be releasing on PC on March 10th.