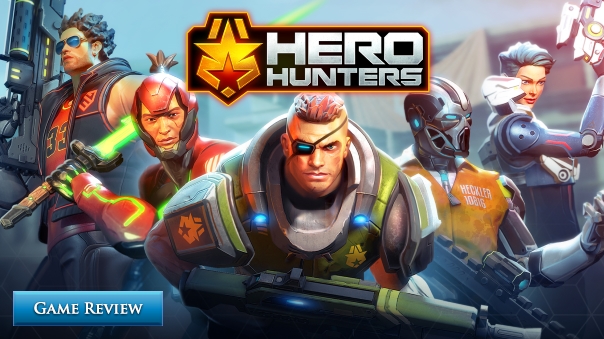 Editor’s Note: This review was played on a Samsung Galaxy Note 4, and is not recommended. So the screenshots do not look as pretty as they normally would.

Hero Hunters is a mobile game that has been in testing and development for a while now, and it’s finally ready to roll out to the public. But is it really? I’ve spent the last several days playing the game, and while it’s a fun concept with engaging PVE/PVP content, I feel there are still some issues that should be considered going forward. Hero Hunters is a mobile shooter where you run a team of up to five characters, each with different roles and abilities, and shoot your way through waves of enemies. The game uses a rock-paper-scissors style combat system to determine if you have an advantage or disadvantage with your team: Green (Science) beats Orange (Mechanical) beats Blue (Radioactive) which, in turn, beats Green. There are over forty characters, each with their own traits, skills, and motivations. Characters are unlocked through the Story, PVP, Gauntlet Runs, Co-Op Boss Raids, and special events. There is no need to spend real money to get new characters. 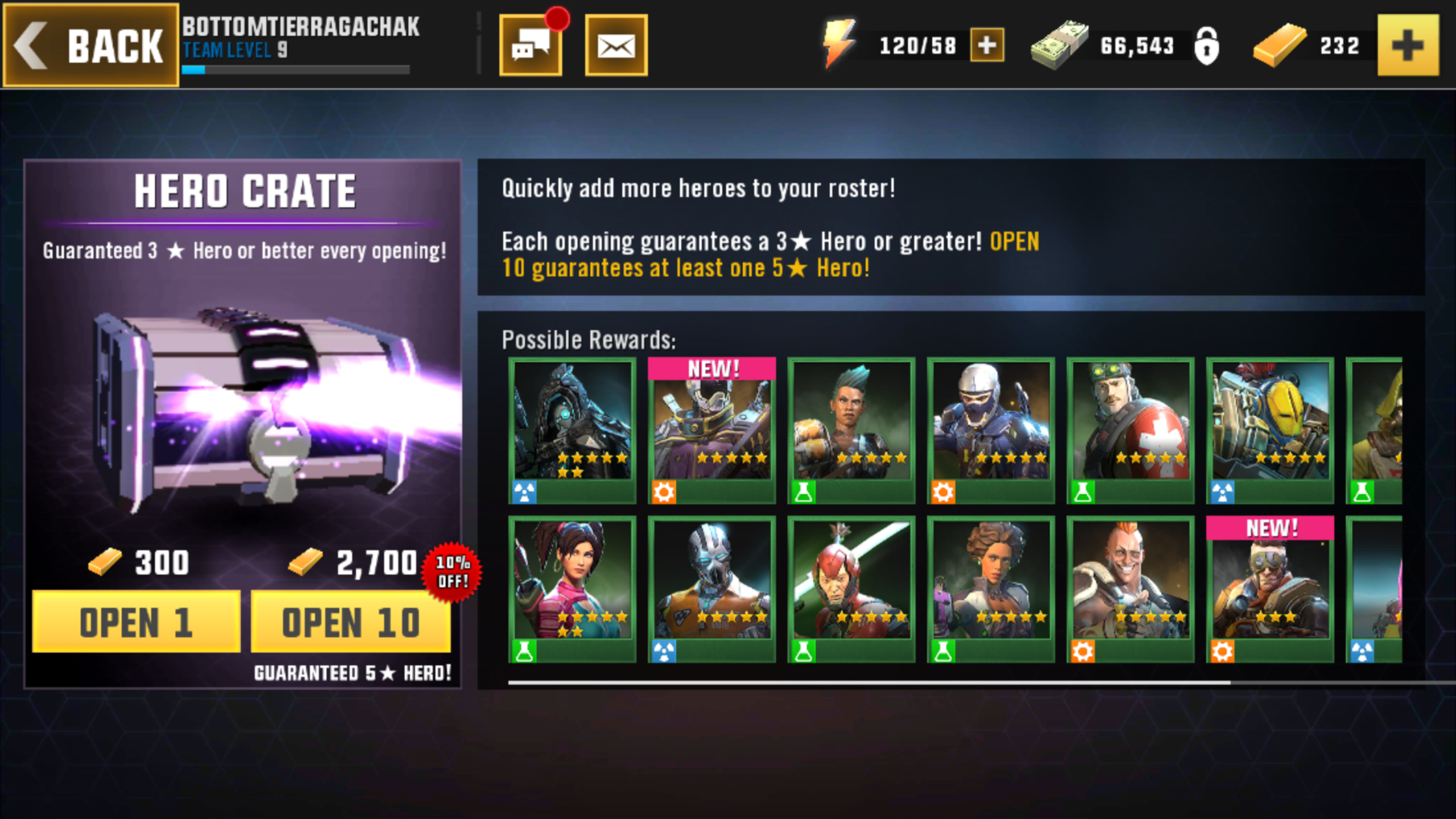 You can unlock everyone through normal play ... but this is much faster.

However, there is a “Hero Crate” in the shop for 300 gold bars. Speaking of heroes, let’s talk about the combat. You put together a team of 1-5 characters and enter a mission. They all have varying amounts of ammo, attack speed, and different abilities (which I’ll cover shortly). You aim with your thumb on the screen, hover over someone, and press the fire button. Enemies are also attacking you at the same time, so you need to be prepared to roll out of huge AOE abilities by swiping left or right to dodge to new cover, or up and down to avoid sniper fire. The enemies have classes and special abilities, and can also spawn as stronger-than-normal Elites. If you aren’t actively using a character, they will act on their own, using their special abilities, opening fire, and dodging as they see fit. The AI is pretty smart about what they use though. Even in auto-play, the team fights smart and safe. 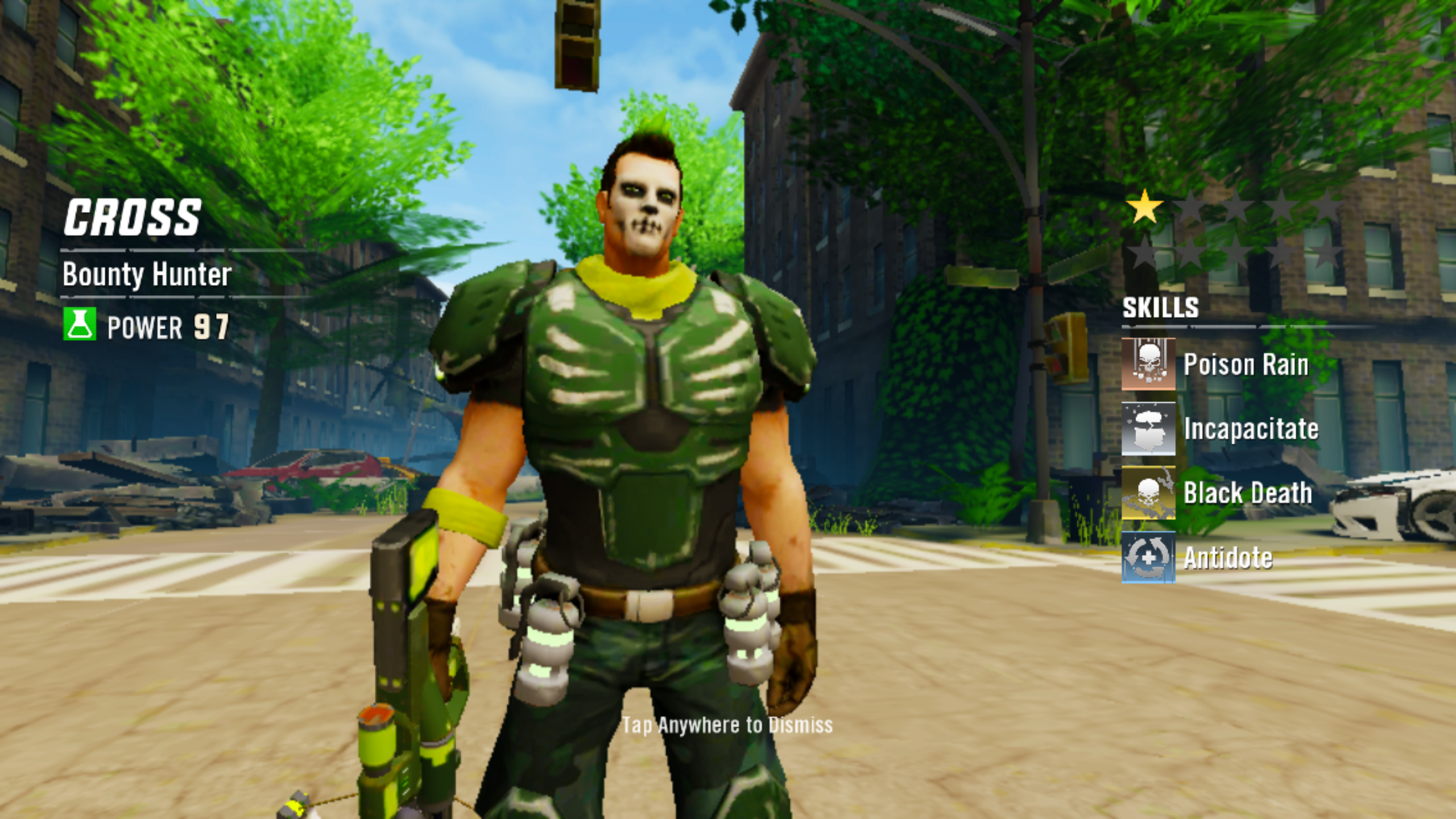 Cross has such a cool kit! It's a shame he doesn't start with access to any of it.

Here’s where my next real qualm comes in. Some of the characters you unlock through the main PVE story, which is awesome. However, they start with no Stars or Rank. As you find shards, you can promote characters (Bronze/Silver/Gold) which gives new abilities and makes them overall just stronger. The first couple of characters come with a power, but the later ones (starting around the fourth character) do not! They honestly feel like a waste to select in battle, because while they do okay damage with equipment, there are teammates who are more important to bring because they have heals, break down walls, taunt, or drop AOE attacks. Otherwise these characters add “Power Rating” and use equipment, but they have no traits that really make them special or even useful. Because of this, I have characters on my squad (three at last count) who have no abilities. You can get shards from chests, or from Hard Difficulty stages (which can only be done 3 times a day, unless you reset the stage, which costs Gold). It feels to me like the game is funneling you down the microtransaction path, just in order to make characters worth running. So you either have to grind a lot or spend that money to get random chances at shards. That’s rough to me and feels borderline predatory. The powers are all incredibly useful too, and if you want to excel in PVP, you’re going to need a squad that all bring something to the table.

Speaking of which, characters also get equipment from chests, and from completing stages, and this adds to that Power Rating. Each PVE mission has a Suggested Rating, and if you don’t stack up yet, the game will recommend you go out and farm/spend/do what you must to be ready. I was underpowered, without spending any money, around halfway through chapter two. I could clear them at a decent pace, but the farther in I went, the harder it was (the gap got much wider). The equipment is mostly found, but there are better pieces that can be crafted with parts you purchase from chests and gained from rewards on maps. It’s also important to know that upgrading your abilities costs dollars (in-game money), and your ability/character level cannot exceed your account level. You receive a ton of Hero EXP items too, so that will never be an issue. 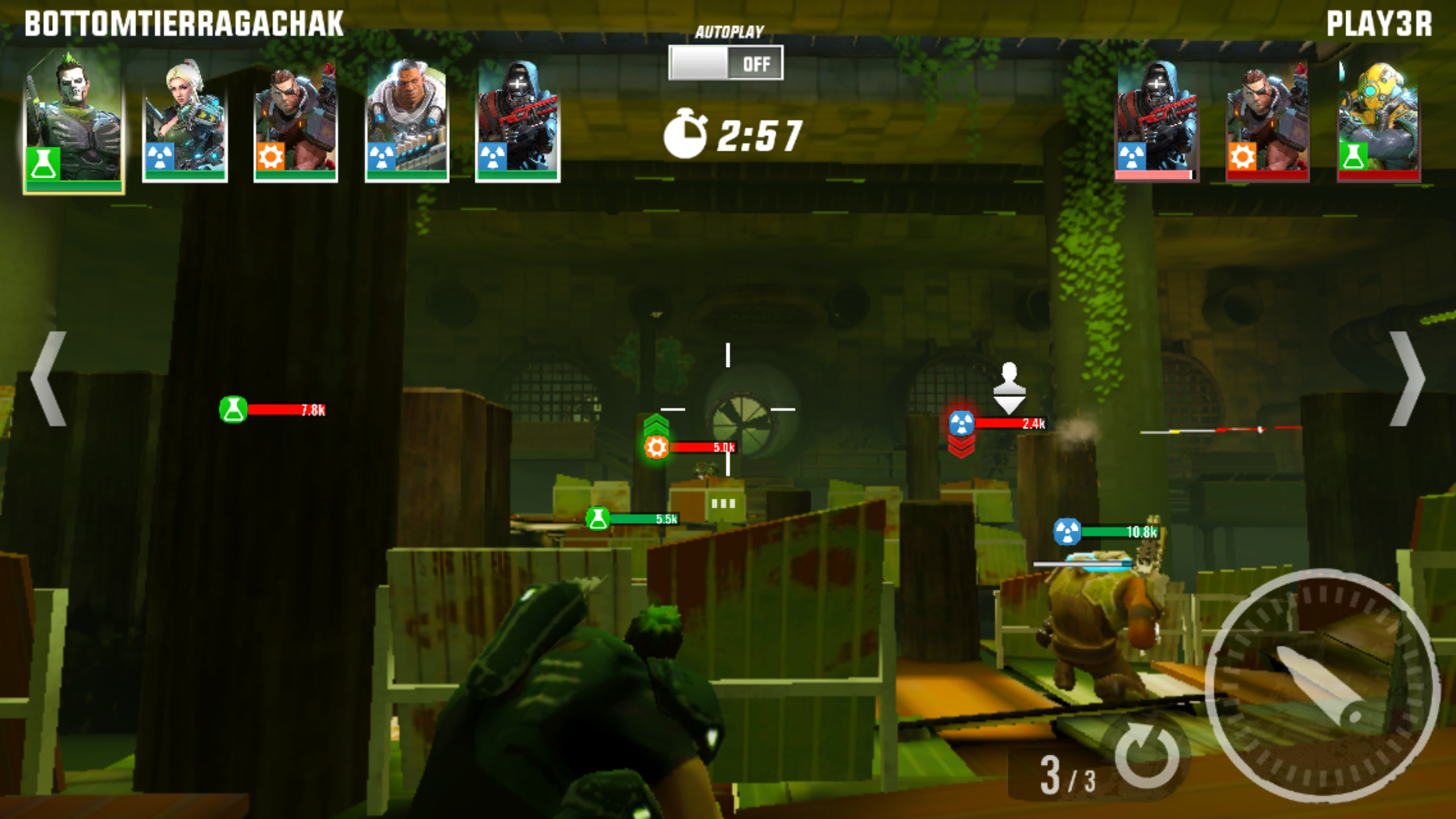 PVP is fast and furious. No waves of minions; just you and them.

The PVP mode plays similar to the PVE mode. You’re matched against an opponent, bring out your squad, and the last squad standing wins. Characters that drop in battle can be revived three times, then I believe they cannot be used again that day. I’m not 100% certain, as I only lost two characters in all of my PVP matches, and that was only once apiece. The PVP is fun, but this early on the matchmaking felt pretty imbalanced at first. After a few fights, I was getting people that shared my Power Rating at least. The PVP is fun, and it will speed along the process of acquiring equipment and character shards. I wish PVP didn’t feel required, because if your team is incredibly weak, it’s only going to frustrate you more to get dominated by people who are better prepared. There is also the Gauntlet mode, where you pick a team (that can only be used once) to run through a few stages. When you get the Reward, you move on to a new challenge, but those characters you picked cannot be picked again, so it would behoove you to only pick a few (if you only have a few heroes), or simply have tons of them on Standby. Then there is the team-up, co-op Raid which offers exciting PVE challenges. 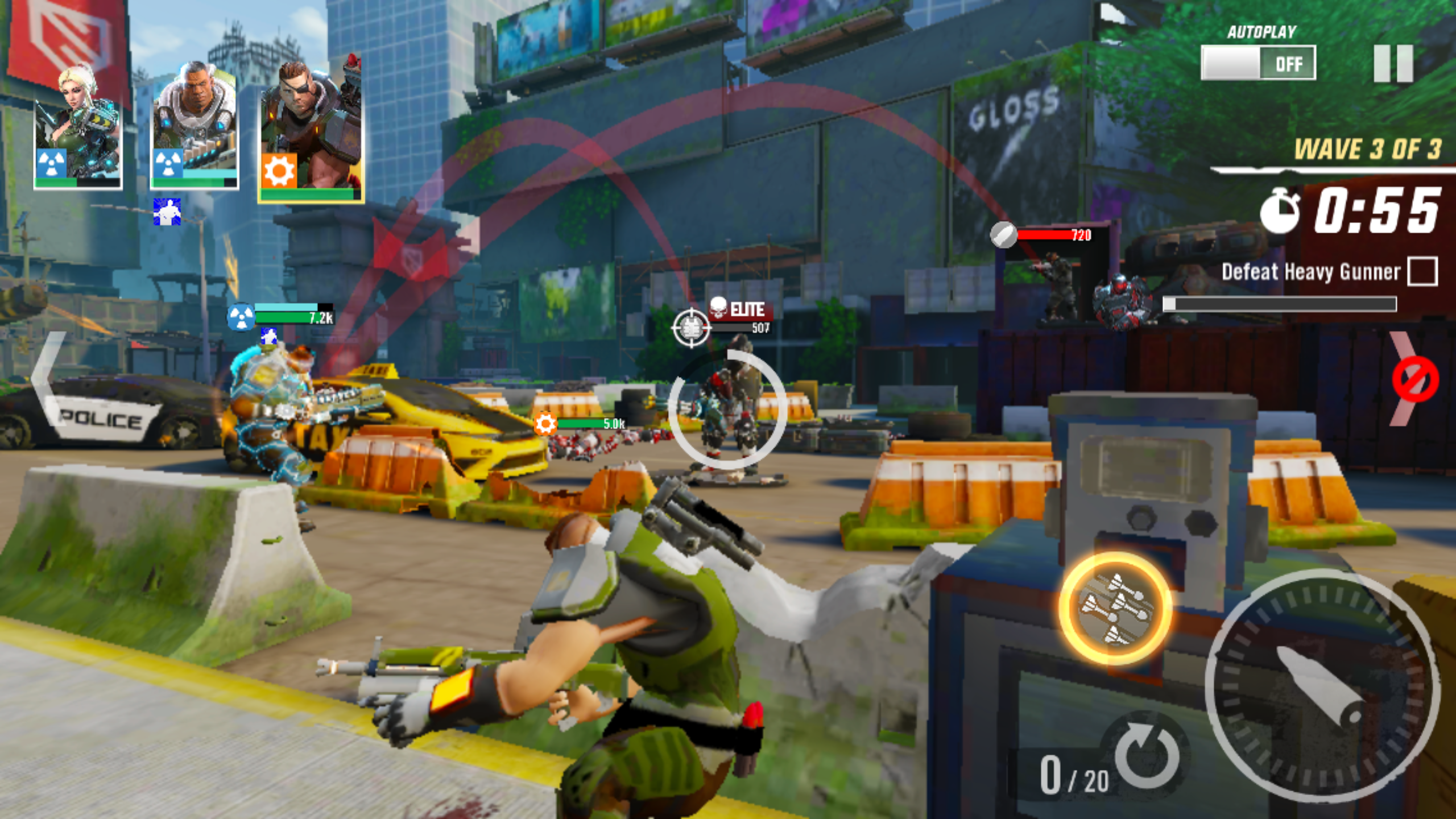 Hero Hunters PVE is unique for a mobile game. That's no mean feat these days.

I love the idea of Hero Hunters a lot. It’s an incredibly cool idea on paper and even in execution. It’s such a difficult thing to do something new in the mobile world but they managed it handily. It’s a fun way to handle a shooter on mobile, and though my phone is not ideal for it (due to circumstances outside of my control) it was still pretty and responsive. The gameplay is smooth, the characters are all well-written, and play exceptionally. But it falls short in how it gates content. Sure, you “can” play without spending money, but the content feels like it will go a lot slower. People looking for PVP right away will probably need to spend money or be weaker on a statistical level than others. If that can be adjusted some, even a little, I think this game could be a pretty stand-out hit. My major gripe is that characters unlocked through regular gameplay begin without an ability to make them worthwhile or useful on your team. Hero Hunters is still a very fun game, but with its current systems in place, I only find myself playing a little here and a little there because I did not spend Gold in the shop. These flaws aside, the actual game is an absolute blast to play; but there should be some minor adjustments made in how characters are acquired or improved to be less pay to win.

Ed Note: This review has been edited to correct an inaccuracy regarding the cash shop purchases. We have also raised our review score in reflection.
Official Site
#HeroHunters