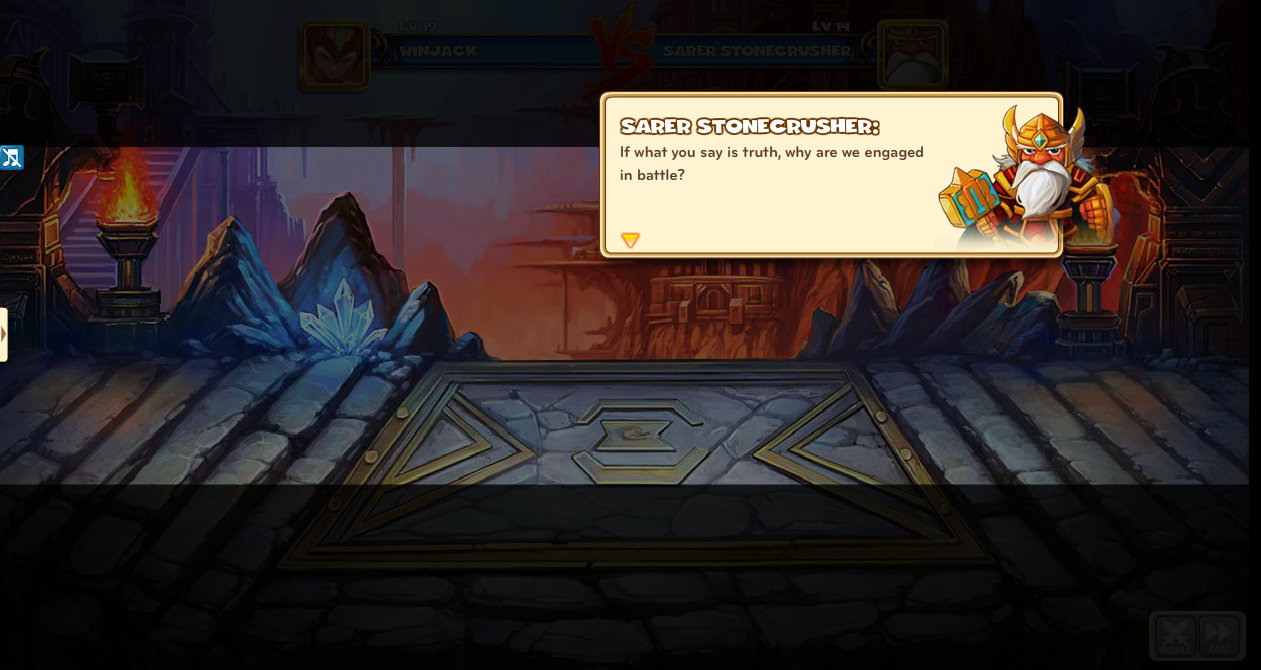 With browser-based strategy games becoming commonplace, developers are hard at work looking for new ways to serve up a tried-and-true dish. It’s no surprise, then, that uCool , featuring team veterans behind Evony, has finally stirred up a new title: Tynon. Tynon seeks to merge features from casual and social city-building games with the worlds of strategy, fantasy, and role-playing. We got our hands on Tynon early to give you a first chance to preview the game for today’s launch.

Quest For The Cure

Tynon is, first and foremost, story-driven. In the story of Tynon, players must help Rosaline (who serves as their first hero) to rescue the King, who has been cursed by a dark wizard. As the kingdom falls to chaos, players take charge and help rebuild the city, defeat enemies, and seek for a final end to the madness.

This means, of course, that Tynon is going to pump a lot of quests your way. While you’re building your city, you’ll be fed plenty of pop-up quests to help you continue. Meanwhile, when you’re adventuring, you will interact with NPCs and slowly uncover the game’s story. Each map acts like a new chapter, adding a little more to the plot. While the story proves to be linear, it at least offers a drive behind your work in the city and abroad. 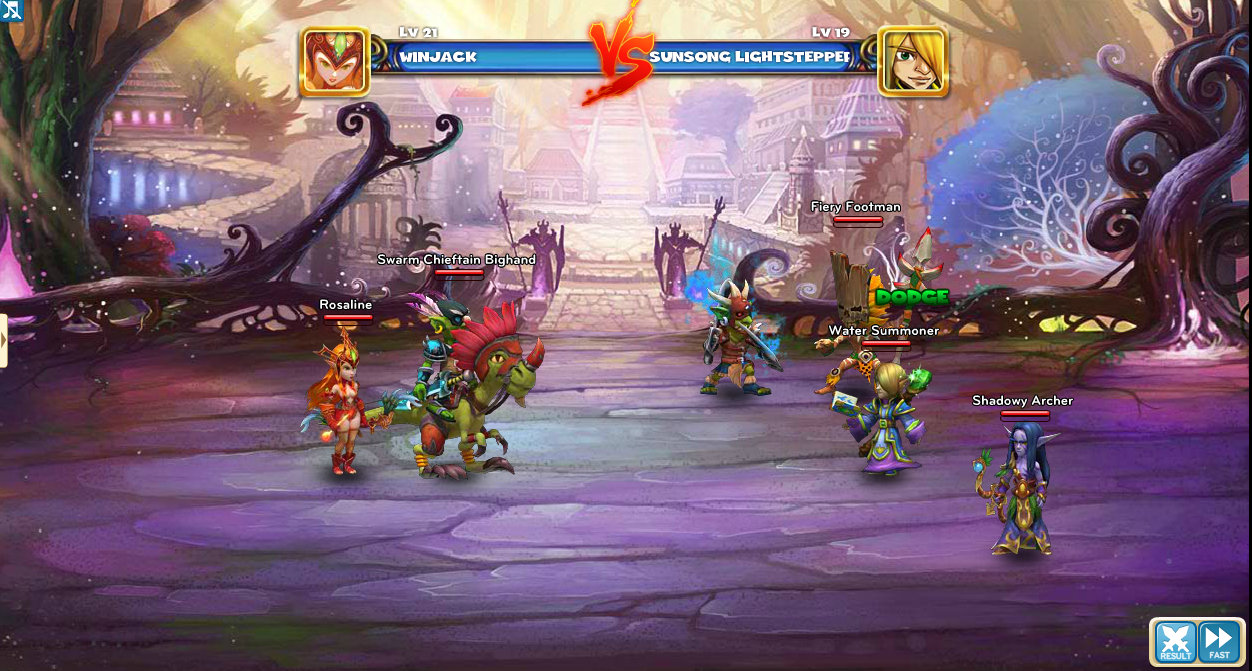 A Fight For Virtue

Half of your time in Tynon will be spent on the Battle screens, adventuring through the game’s storyline. The story is blocked out into separate areas, each with a recommended level range. Here you will find battles waiting for you. Each battle must be done in progression toward the end “boss” of the map, although you can also revisit old battles to grind for rewards. Victory will, at least, net you some virtue (one of the game’s main “currencies”), plus the possibility for items, coin, and heroes.

Battles are somewhat static: the enemies in each available battle are preset with no random surprises. Combat, too, is automatically handled by the game’s AI. Each unit on the battle screen will take its own turn in time, and will sometimes use a skill. Because there is no control over the battle, Tynon offers a “fast forward” button to speed up combat, as well as a “result” button to just get to the end of the battle and see the results. There is also an auto grind feature which will let you “set and forget” your heroes to grind out a battle repeatedly without needing to manually load the battle yourself.  While the battle system is easy for beginners to learn, we did find it disappointing that there was no advanced combat option for experienced players to take control of the fight. 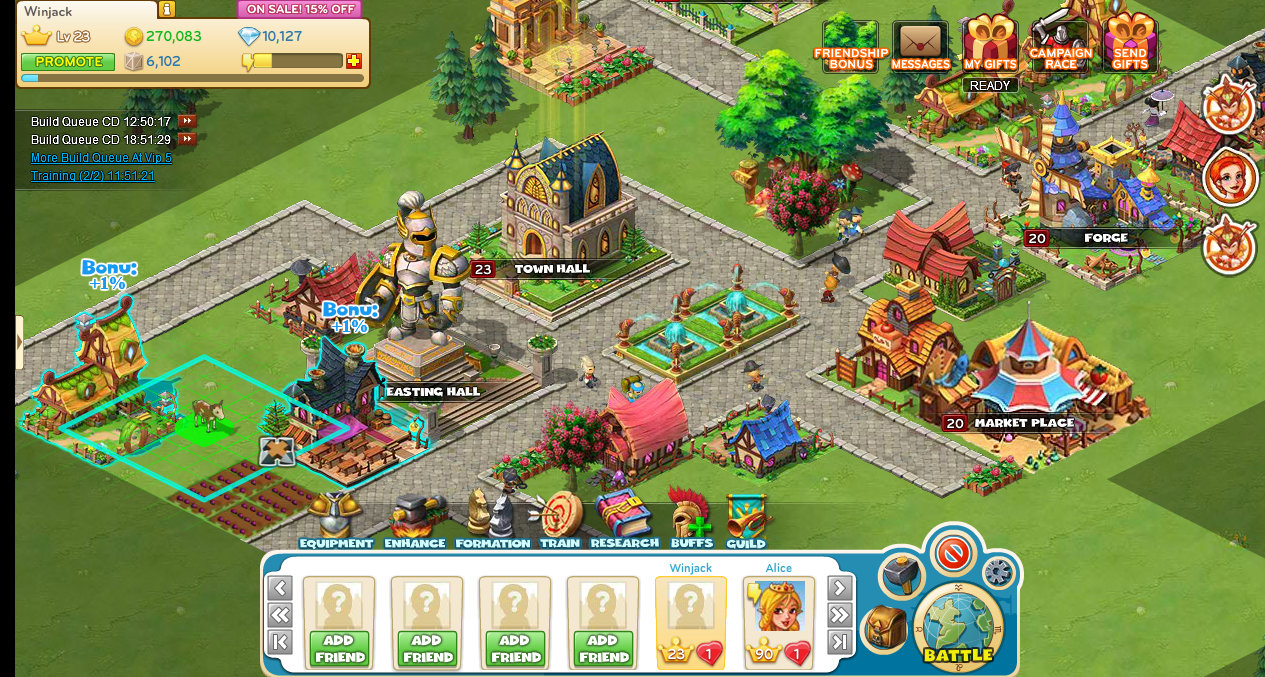 When not battling out against goblins, naga, and elves, you’re in charge of rebuilding the Imperial City. If you’re familiar with Facebook city-building games, or Forge of Empires, this city building interface will feel rather familiar. The city can be completely managed and rearranged at will, and comes with dozens of buildings that offer utility from equipment enhancement to revenue generation. Building and decoration placement also comes into play with additional bonuses when placed strategically.

Unlike many strategy games, you won’t have to ever manage resources like lumber or fight for your supremacy on a world map. However, Tynon’s resource system still keeps players in check. Many buildings and upgrades require either money or virtue (earned through completing quests and battles), and a building queue limits the amount of work that can be done each day in the city. Some buildings also require upgrade parts, which can either be purchased with real currency or be asked of from friendly players, much like other social city-building games. In-game purchases also include a VIP package that unlocks more city-building and battle features, and we found that with the game’s limited competitive nature, the cash shop isn’t at the crux of enjoying your time playing. 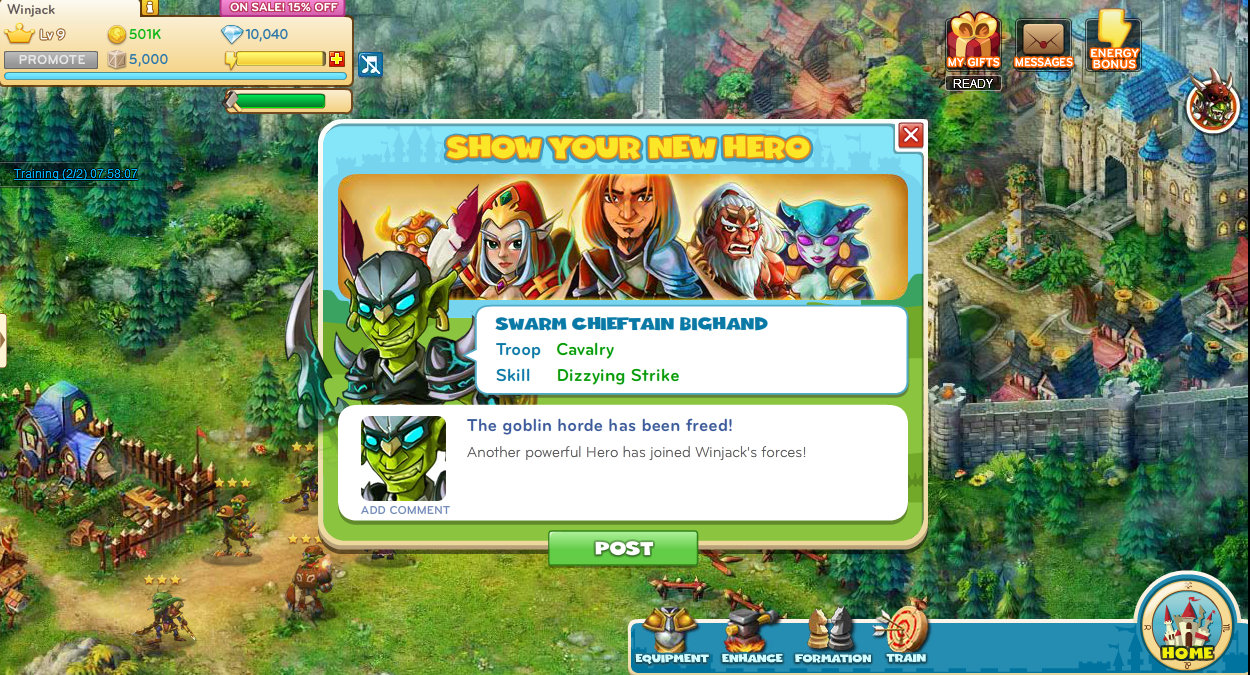 We’ve already mentioned the ability to find heroes as rewards for finishing battles. As part of the storyline, many heroes that you defeat in battle will join your ranks. Each hero has their own specialty, such as front-line warriors, back-row archers, or mounted cavalry; they also come with their own unique skills. As you develop your city and research, you will be able to field more heroes on the battlefield – but you’ll have plenty of options waiting in reserve.

All heroes can be equipped and trained. Training takes several hours and raises a hero’s level, which can be especially important with new heroes that you want to bring onto the battlefield. Six equipment slots – weapon, staff, chest, cloak, mount, and accessory – let you build your character’s stats even further. All items can also be upgraded with the help of the forge and a little coin, helping boost even starting equipment to powerful levels. We’d like to see more items become available, perhaps through a city shop, to broaden the availability of unique equipment pieces. 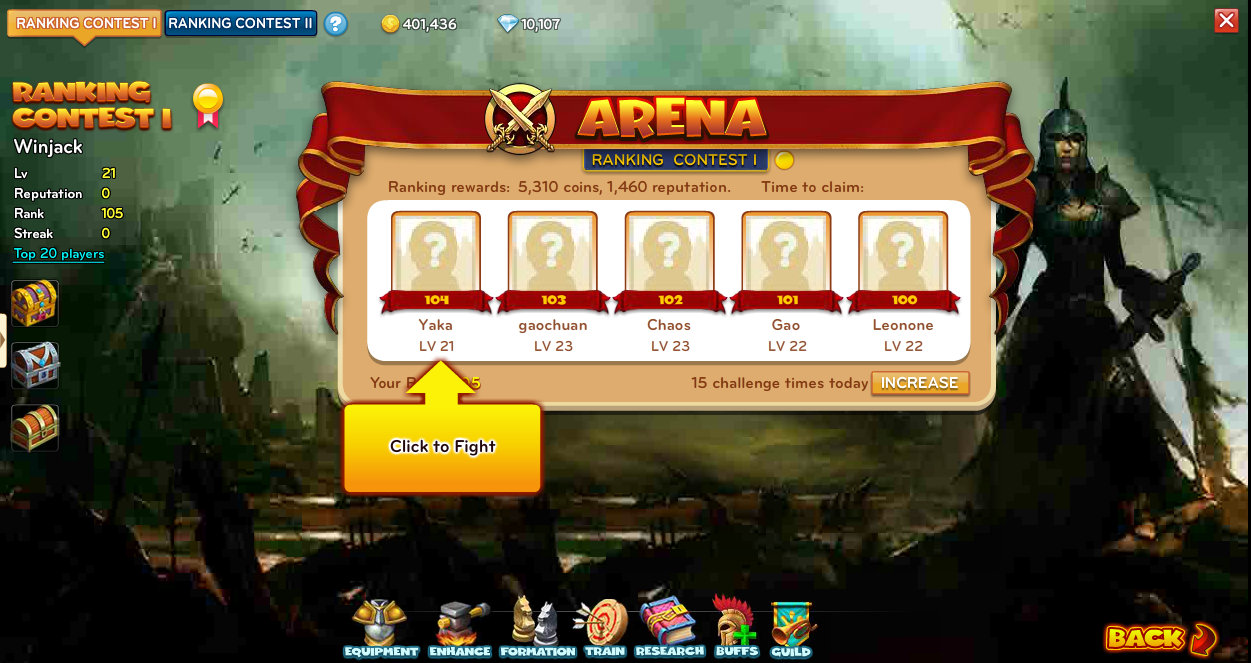 While Tynon is very single-player oriented, it also offers several social features. Cooperatively, players can visit each other’s cities to lend a helping hand and earn bonuses, send gifts to help build each other’s empires, or join together into a guild. You can also send your heroes into battle in the arena, where ranked challenges await you each day. Wins and losses here count toward your ranking, even when you’re challenged while away, so building a strong team is key. Unfortunately, since battles are automated, you must also hope that luck is on your side. 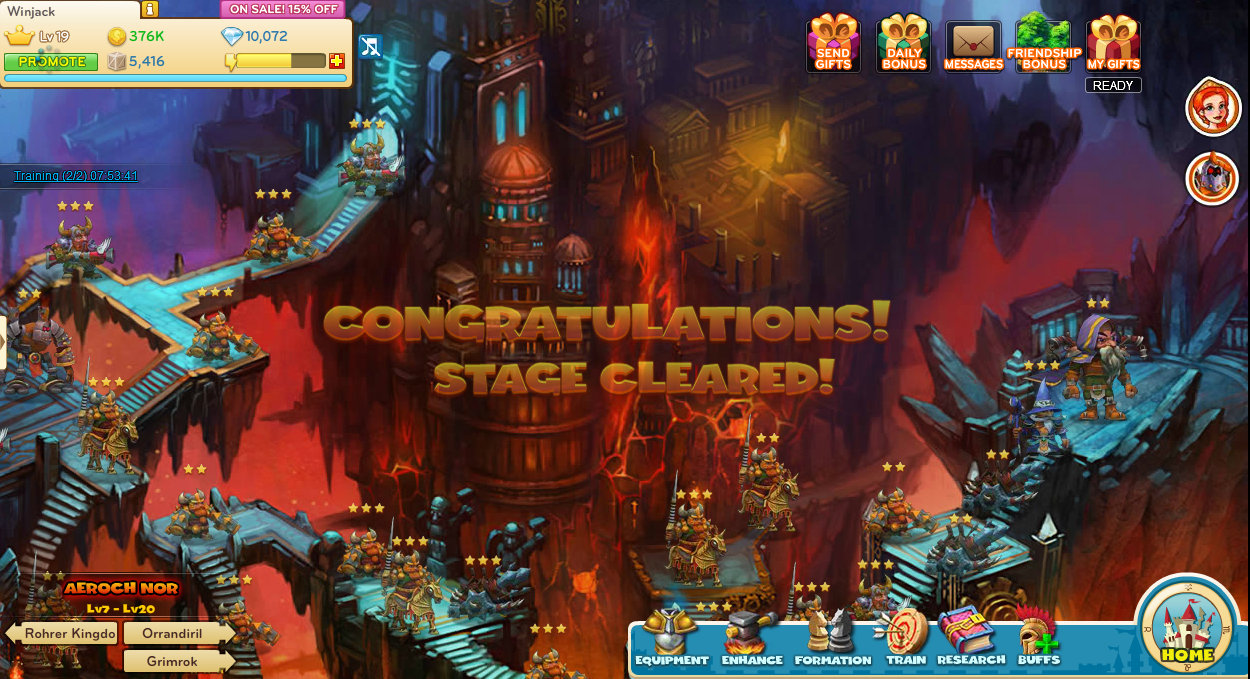 What It Boils Down To…

Tynon is a colorful, intuitive game with a decent story and plenty of content to keep most players going. It offers a strong appeal to more casual players, but still has enough competitiveness to encourage more hardcore gamers to put in the extra hours and effort to stay on top of the various leaderboards. uCool has already promised further guild support and storyline additions in the near future. We’re confident that beginning strategists and Facebook fiends will come to adore the game’s streamlined content, and veterans will find the hero system combined with the arenas a welcome challenge. If uCool develops more content to appease the competitive and advanced players, Tynon will likely stay a long-standing competitor in the field.