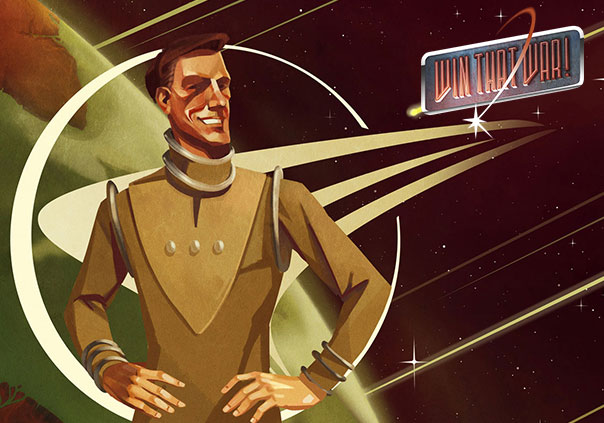 Win That War! is a 3D Sci-fi MMORTS developed by Insane Unity for PC and is available for purchase on Steam Early Access. In Win That War! players can experience a strategy game on a scale like none other, putting thousands of players at the heart of a campaign for galactic conquest.

The year is 1023 of the Galactic Era where the population has expanded throughout the universe and even deeper explorations are being sent out. A new planetary system has been discovered, and within it are stars with a new, untapped resource that could change everything. Now the largest economic powers of the galaxy are dispatching envoys as fast as possible in hopes of claiming their own riches from the stars.

Begin your domination in a multiplayer campaign where opposing factions wage war on a planetary scale to control territories. Start as a low-ranking employee in one of the major corporations of the universe, trying to expand its power. Once you’re done with a planet, move on to the next one and start all over. There are infinite planets in the universe to take over, but only so much time for you to expand your influence. Collecting intelligence and managing your resources will be the keys to your success. Without resources you won’t be able to build units or construct upgrades, and without intelligence you won’t be able to make the best use of the units you have made.

Rise to your calling and help your corporation achieve dominance on an interplanetary scale.  The Galactic Era is at its peak and there is little time to waste.  You’re one of the few that can make a corporation realize its true potential and emerge as one of the strongest in existence. Remember to move quickly because your corporation isn’t the only one trying to expand!

In the 1950s, we had a particular vision of the future, which "Win That War!" brings to life again in a spectacular fashion.

Insane Unity is excited to announce that their breakout title, Win That War! is now available on Steam for Windows PC!