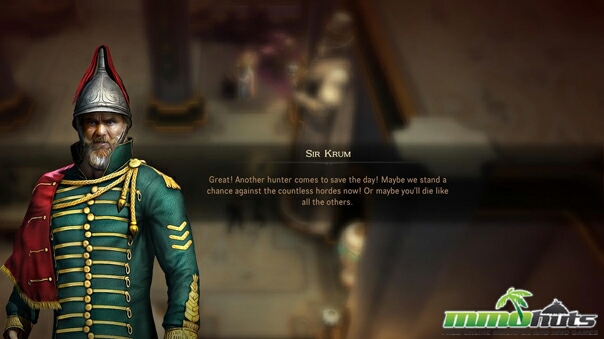 Introduction
Victor Vran is the latest title to come from Haemimont Games, known for their strategy games and Tropico series. It is set in a sort of Gothic-Fairytale world where man, science, monsters, and magic clash. As an action RPG, you can expect intense combat and hordes of enemies to come at you. Playing as Victor Vran, you will make use of a plethora of weapon and demonic magics to take on your foes and save the city of Zagoravia of its demon infestation. Let’s take a look and see how well Haemimont Games has done with this new title.

Customization
Despite having a leveling system, all of the customization available comes to you in the form of equipment. The weapon you have equipped dictates one portion of the abilities available to you, while your equipped demon powers dictate the rest. A hammer weapon will have abilities that take a while to charge or have large AOE effects, while a rapier will have abilities that offer quick charges or single-target high damage attacks. So, while there is no traditional skill or stat system, customization options are abound and you can play the game you like and give Victor Vran your own twist.

Leveling up brings you two things. Your choice of a piece of equipment, and some kind of “bump” to some of your stats. For example, when you level up you might get more Health or you might find yourself able to equip more cards. These tarot-like cards are split into various levels of power and offer you bonuses, such as increased critical hit damage. Often times you can choose to take a box that will give you a decent weapon. You can use that box for just that, or you can save and accumulate them to transmute into a box that will drop a weapon with even better stats and bonuses. It’s stuff like this that offers you a decent amount of customization without making use of the traditional methods of stat points distribution and skill-buying. 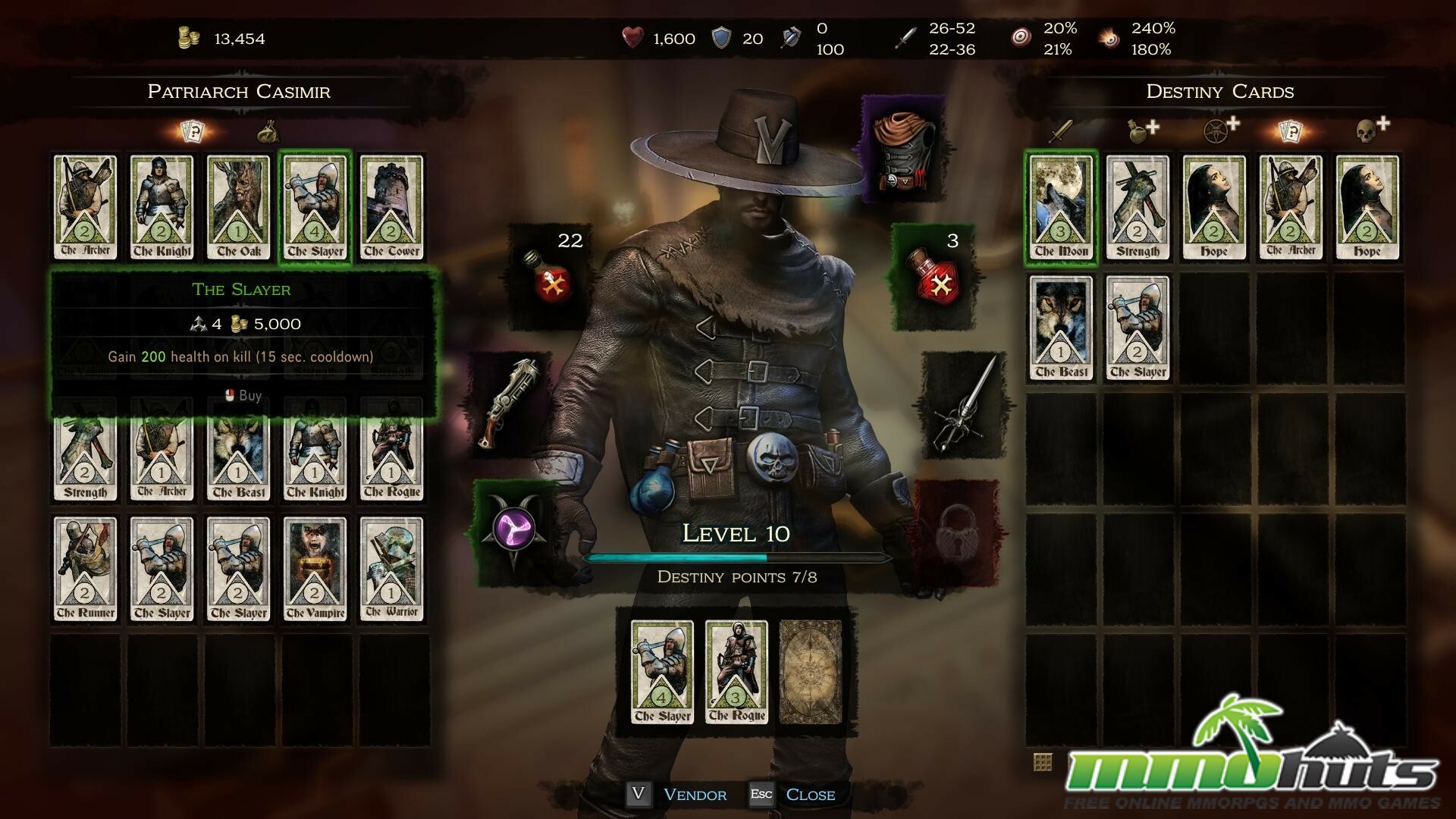 I love the designs of the cards.

Graphics
Graphics quality isn’t the highest, but is more than adequate. And what the game lacks in highly-detailed models and textures, it more than makes up with atmosphere. Foggy, creepy city covered in demons, undead, spiders, and other monsters that lurk at every corner. This helps suck you into the game, letting the hours fly by as you thoroughly enjoy the game. Needless to say, graphics will be getting a high score from me. 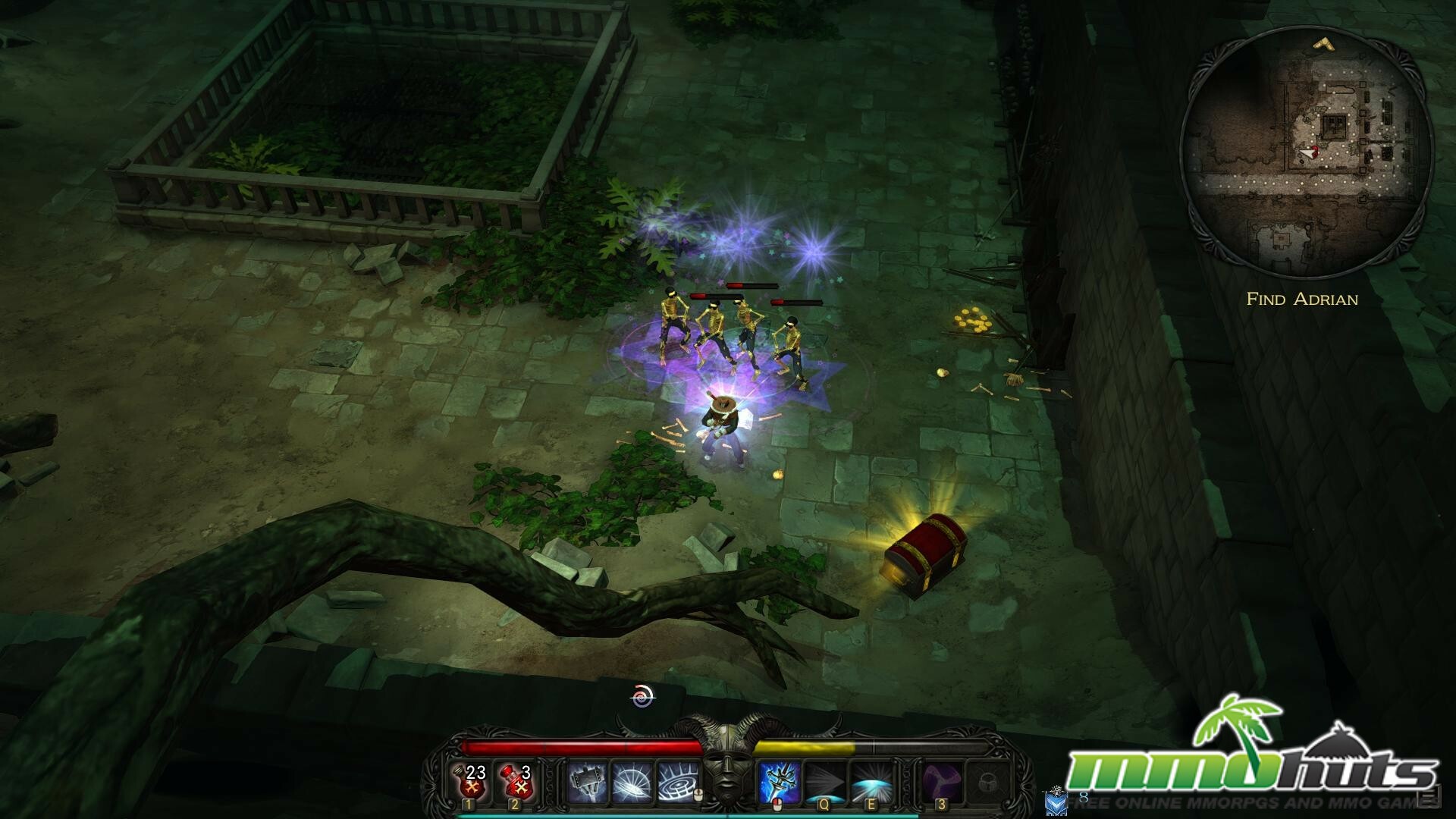 Just dancing with some friends.

Controls
Victor Vran is one of those games that you get the impression was meant to be played with gamepad, as evident by the fact that you’re asked which method of control you would prefer almost as soon as you launch the game. While you can play perfectly fine with keyboard and mouse, the experience felt much richer when sitting back and playing with my PS3 controller. I never encountered any issues with the controls, so there are no complaints from me. Definitely a 5/5 experience, at least where the controls are concerned.

Gameplay
The game, while having a strong story that is enticing and fully voice acted, doesn’t take itself completely seriously. Most of the characters have ‘extreme’ personalities, which can come off as silly at times and endearing at others. Some monsters you’ll destroy will have you laughing, such as a small horde of Psy-look-a-alike skeletons, doing the Gangnam Style dance as they approach you. If you fail to keep your distance, you may find yourself joining their infectious dance. It’s light-hearted comedy like this that help keep the game from being overly depressing and more than makes up for any of the (very few) short-comings that it has. 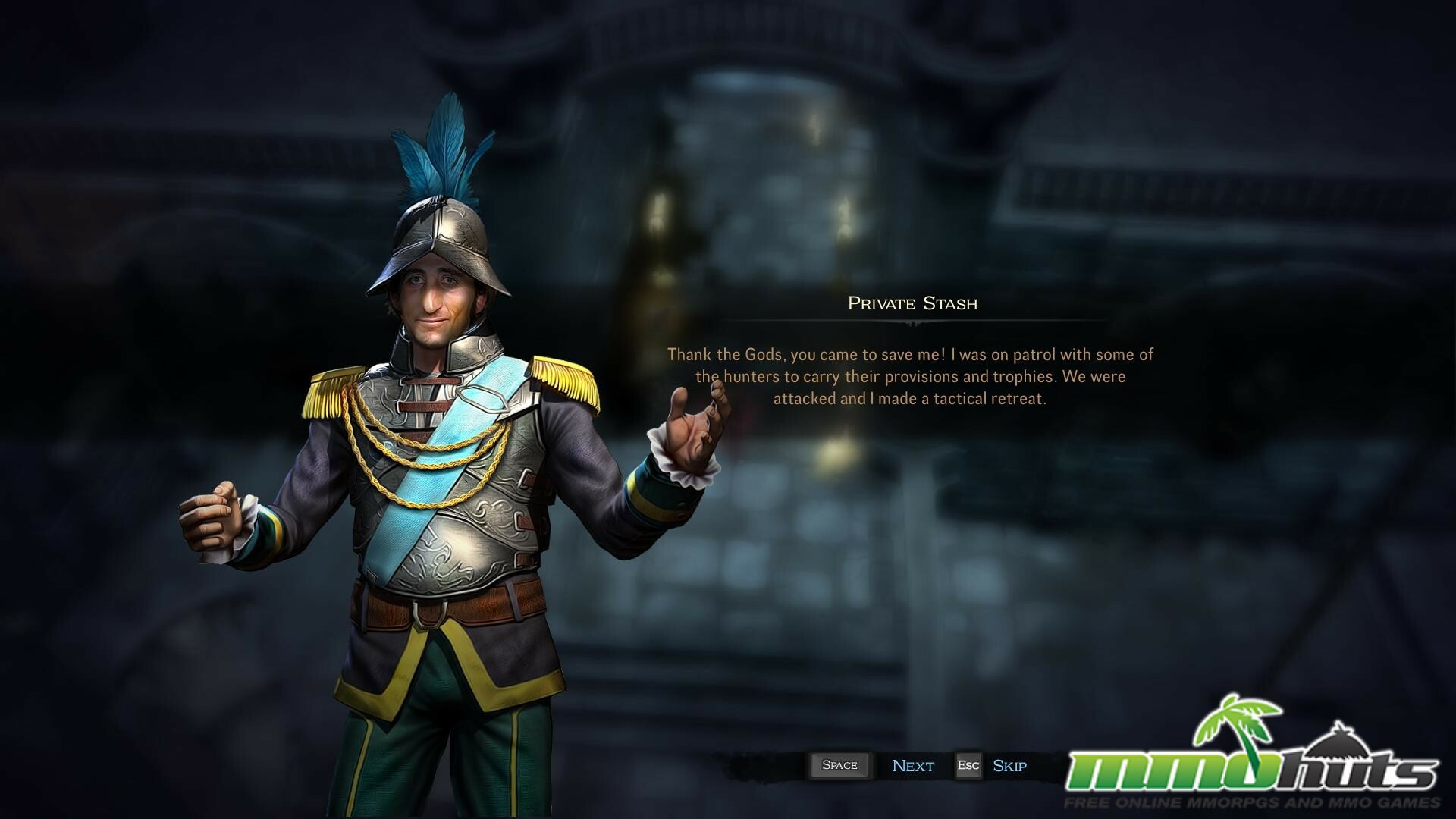 Tactical Retreat. AKA running away.

Combat is fast-paced with a lot of movement and twitch-reactions involved. And, despite the perspective, the devs have managed to give each attack a “weight” that you can almost feel. As an example, when you swing your hammer, it will take a bit to get the momentum going but once it’s going it doesn’t stop. Speaking of weapons, there is a decent variety. From shotguns that excel at taking on groups of enemies at range, to rapiers that are perfect if you love fast-paced attacks that are meant for a single target at a time. No matter your play-style, there is a weapon that will enable it in Victor Vran. 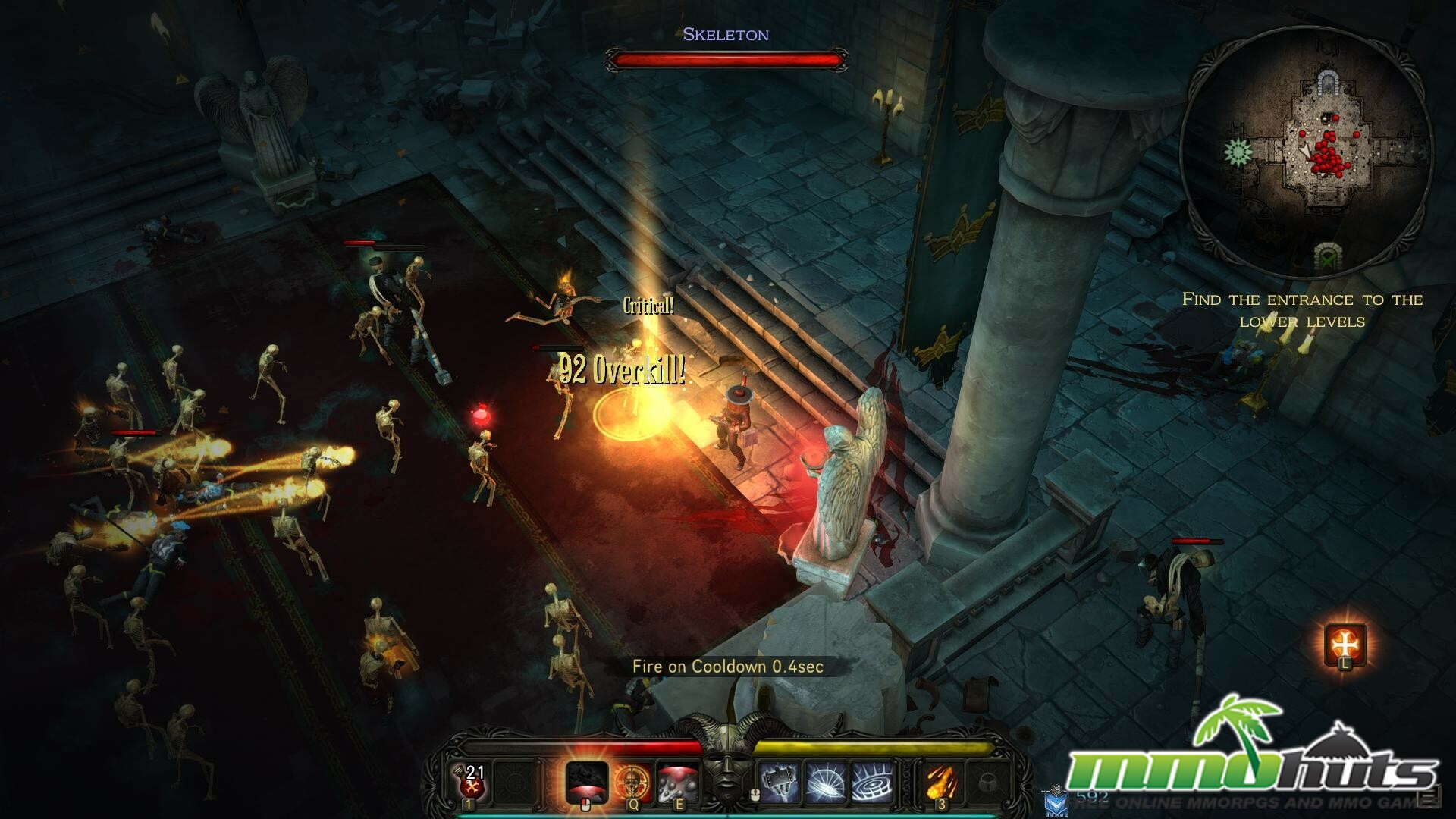 I love the shotguns in this game.

If you like to loot things, you’re in luck. When you kill an enemy it has a chance of dropping gold or various items. The same goes for every single crate, urn, tomb, box, or anything else that is made of wood or stone and might have something inside. Plenty of chests around to loot which often explode into showers of gold, too. Heck, even some of the map objectives (which I’ll get into later) require you to murder these destructible objects. And everything falls to the ground and you collect it by simply running over it, which can be quite satisfying.

Like a lot of top-down and isometric RPGs, Victor Vran has a hub format. That is, there is a “Hub” location where you can advance the story, store items, trade with merchants, and head out to various parts of the demon-infested city. You might get the impression that with this format, the story takes a back seat. Fortunately, that is absolutely not the case. While offering freedom to “grind” loot and experience, the story of the game is still the central feature. So you get to develop Victor to fit your needs and enjoy some intense dungeon crawling, while at the same time experiencing an intense (and at times comedic) story.

As you play the game you’ll follow a main story line, which can sometimes branch a bit. To be honest, the game is mostly linear. You go through an area, complete the objectives of the story mission, and move onto the next. To help relieve this linearity and perhaps to satisfy the “Completion Hunters” each map you go to will have various objectives that can be completed for item boxes, gold, or experience. When one of these objectives is completed, a glowing flag will drop from the sky and land wherever you stand; the standard explosion of rewards falling all over the ground ensues. You will also gain a star towards completing that map that you can check out whenever you’re in the hub.

The setting of the game is almost straight out of a Gothic nightmare. Demons, spiders, undead, and all other unsavory sorts are abound. Magic contends with technology, as Hunters make use of old-fashioned weaponry and more recent firearms to take on the demons and other things that go bump in the night. Victor Vran is one such hunter, tainted with demon magic that allows him to call down firestorms, create magic shields, and other fantastic feats. I feel in love with the world of Victor Vran immediately, as it provides a very satisfying clash of many different elements that I enjoy. 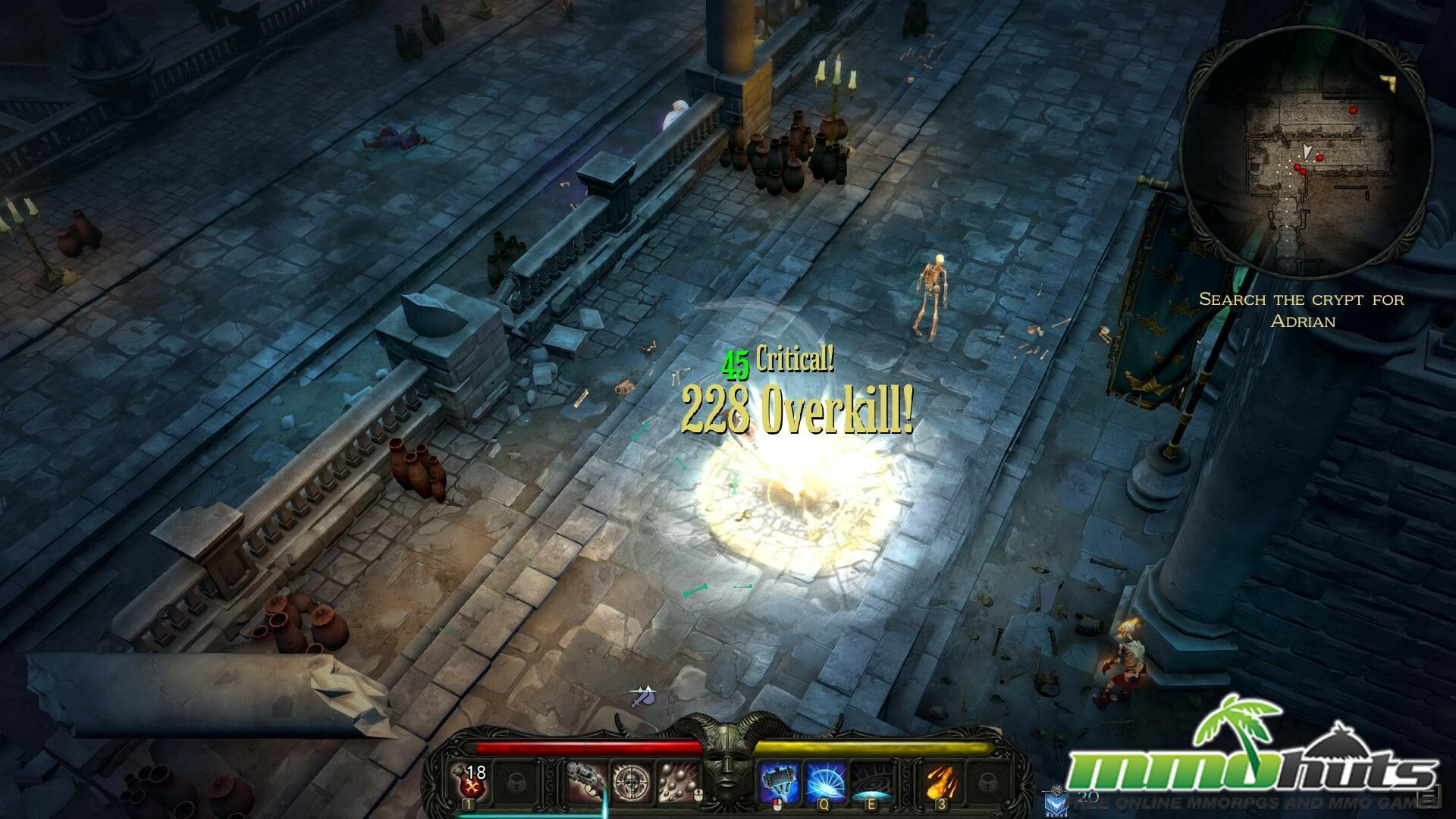 The developers seem to take pride in the rich world they have created, too. You’re given access to a Codex that will fill out as you discover parts of the game. Each enemy, map, and other such interesting things are recorded into the Codex for you to review whenever you like. This can be helpful when coming against enemies, as (especially early on) you’re never sure what types of abilities an enemy will employ until you fight it. If you happen to come across the enemy again but aren’t completely sure on its abilities, you can just quickly check the Codex. I have to say, though, the format of the Codex isn’t exactly what I hoped. I really wish it had taken the form of an old, weathered and used tome that could be flipped through (almost similar to the ‘Codex’ in games like Ni No Kuni on the PlayStation 3).

Conclusion: Great (4/5)
Victor Vran has proven to be one of the best action RPGs I’ve ever played, completely blowing past my expectations and raising the bar for all future isometric aRPGs I’ll play. Haemimont has proven that their talents expand much further than helping people realize their dreams of being a Dictator. Everything you could want is there: An awesome demon-hunting hero with a mysterious past, choices to make, intense and fast combat to enjoy, a story that is interesting with a bit of comic relief… It’s all there and it’s all done well. Simply put, Victor Vran was a complete treat to play, and I highly suggest you get it now. Despite the Early Access tag, the game is surprisingly polished at this point and who knows? Maybe the $20 price tag won’t last, they could definitely get away with raising the price. Get it now.

Features: 3/5 – Interesting features, but not so many.

Customization: 3/5 – I liked what was there, but at times I wished for more.

Graphics: 4/5 – Not the highest quality, but very atmospheric.