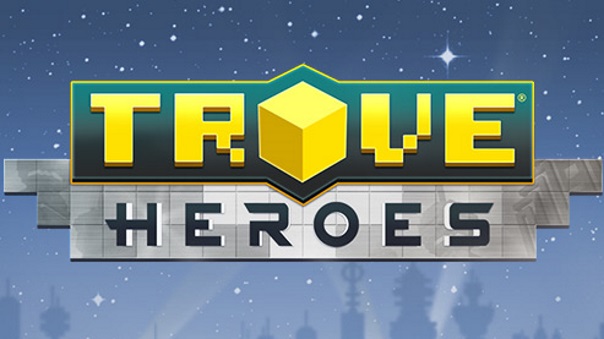 Trove is one of the few MMOs that I actively play in my rare free moments. It’s a relaxing voxel MMO where I can go on adventures and build ridiculous things. But it was missing something. It was missing Superheroes, of course! I recently had the opportunity to take a look at the upcoming content and get a sneak peek at the Trove – Heroes update, and this is easily my favorite content update for the game. A lot is going on with Trove right now with their expansion into Japan and the Beta Test in China, but today we’re going to just talk about Trove Heroes. We have Luminopolis, The Vanguardian, and Assorted New features and this promises to be a really exciting content drop for Trove. 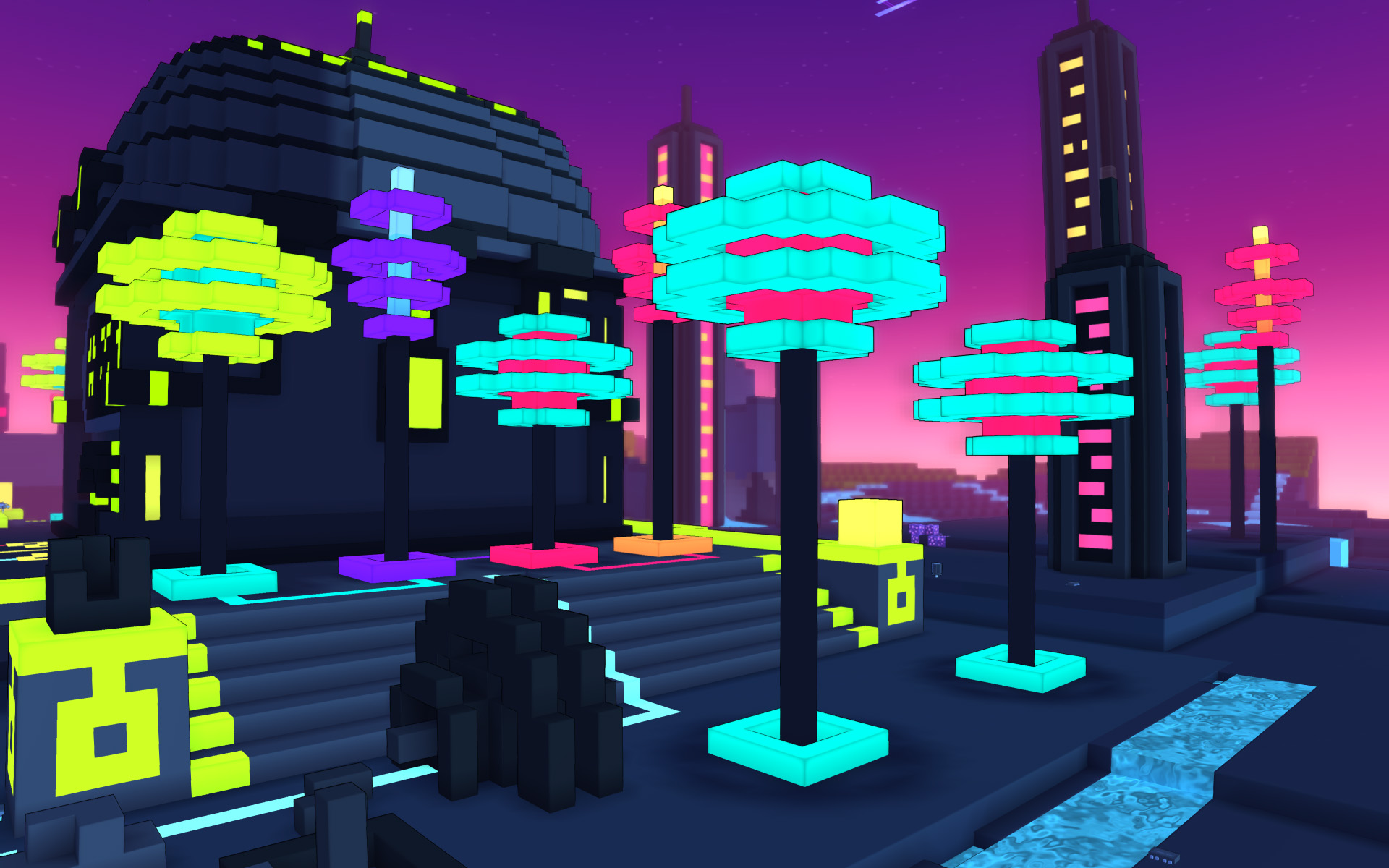 I will fly high above, Luminopolis.

For being “Neon City”, it’s a pretty gray and blue area, very dull to look at. We finally learn why that is the case as a new sub-biome appears in Neon City, entitled “Luminopolis”. This city actually is bright, shiny, and colorful, filled with all the colors you loved from the ‘80s. The Amperium is the reason Neon City is such a dull color, and they are working to take over the whole of this biome. All that is left that stands in the way is Luminopolis. It features a gorgeous new, Miami Vice-styled sun, and the circuitry clouds. The re-vamp offers quite a lot of gorgeous visuals and content for all levels of players. This is a more story-driven area, which doesn’t mean it will come with tons of quests, but it does have more visual storytelling, which will give players a reason for being where they are, doing what they’re doing. I rather like the idea of having more of a story in Trove, to be honest.

Through interacting with NPCs in Neon City you learn about the Amperium, and how they are trying to attack and take over Luminopolis, and as a hero, you just can’t let that stand. There’s a faction (aptly) named the Resistors, doing what they can to fight back against the Amperium. A city in peril needs a hero to protect it.

Enter: The Vanguardian! The sixteenth class in Trove, and he features a lot of new functionality to the game just in general. His base “form” is a melee combatant, and one of the goals is to let the player be the kind of hero they want to be. The melee form has awesome punch combos that follow up with a stiff uppercut, and has eye-lasers, which have a damage amplification effect added to them. His “1” ability is a speed buff (attack speed and mobility), and his “2” leaps backward and transforms into his Ranged Mode. Now he fires plasma blasts at his enemies, and his alternate attack fires a fiery orb that explodes. The “1” ability again increases his attack speed, and “2” will swap back to melee. The important thing here is that it is not a temporary stance change. If you simply don’t like melee, you can stay in the ranged form, but there is a cooldown on that swap. His “passive” is Touchdown. When he’s gliding, there’s a Sonic Boom behind you. When that triggers, you can land, which explodes, breaking blocks around you and collecting them. It won’t break blocks that are flagged not to break (like in your Club World). With this, who needs bombs? It’s also the skill he gives when he’s a sub-class, so you won’t miss out on it. Speaking of which, they also showed off new wings, the “Wind Tunnel Wings”, which look like a wind tunnel behind you, as opposed to regular wings. It’s a flavor thing and really finishes off the Superhero look. I’m not sure how I feel about the Vanguardian’s dash/dodge being a Dab, but here we are. 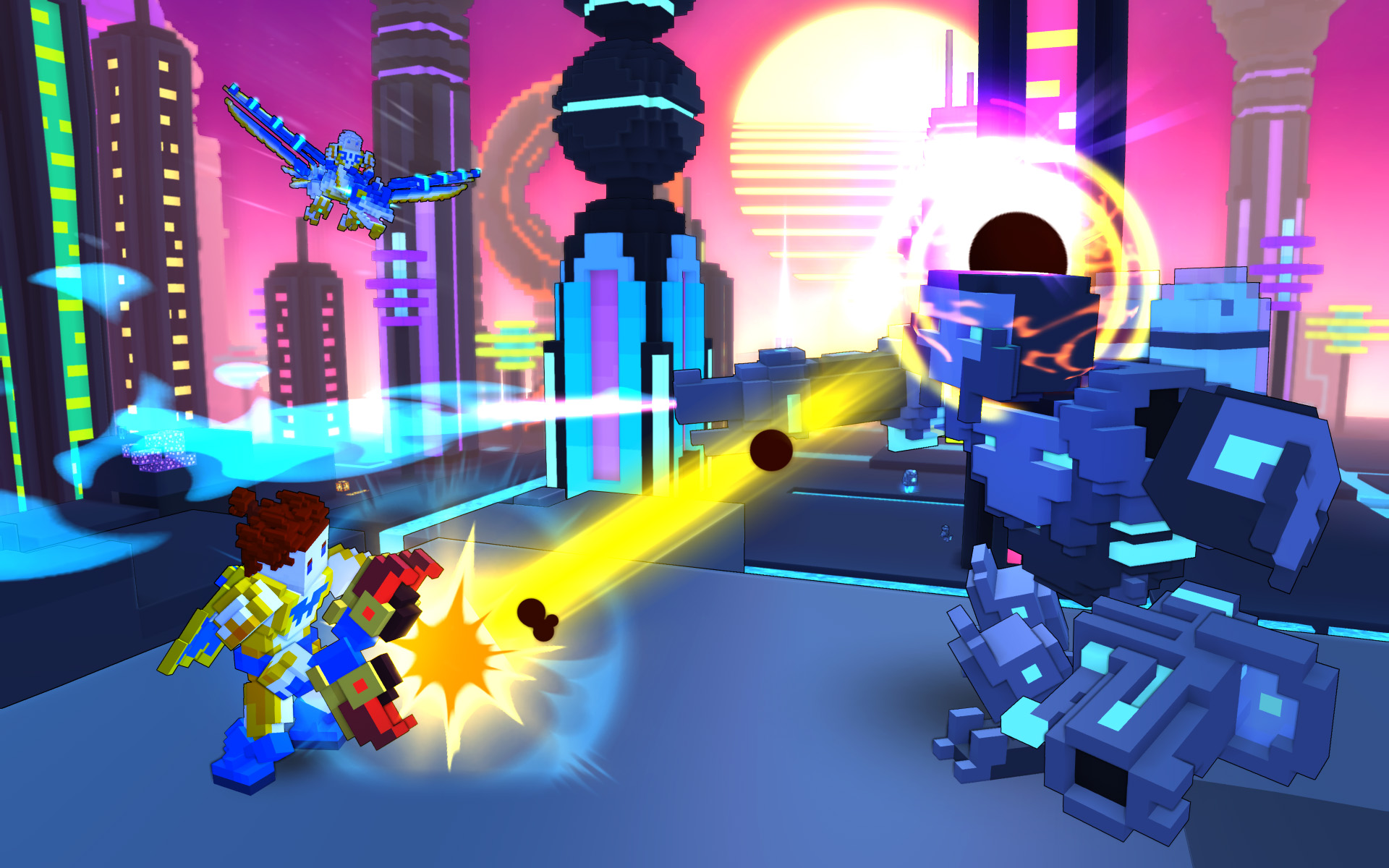 The Class Gem reduces the cooldown on your form swap every time you complete a combo, so there’s a lot of synergy going on. Another fun fact: When you transform into the melee form, you dash and pull enemies in, and when moving into ranged form, you leap back and push other enemies away, giving you some room to fire on them. There are also amazing costumes for the Vanguardian, for both the Resistor and the Amperium. You can also look forward to a pair of new Dragons which also match these color schemes/styles. The new costumes/dragons are acquirable through regular in-game means, but there are also packs to expedite that if players wish. There’s also a Retro-Themed costume (Paragon of the Past), that adds the “Pow!” “Bam!” onomatopoeia to your attacks, and if that’s not the coolest thing, I simply don’t know what to tell you. Back to the dragons briefly, these are also the first dragons to also be Mag Roaders, and also have awesome breath weapons. They’re craftable and absolutely worth it.

Outposts are a cool new feature, only in Luminopolis. These are ways to receive adventures in the world. They feature “Kami” NPCs, and you can do 20 adventures a day from them. It’s easily the best way to get exp to boot. There’s also the Resistor Workbench, which lets you craft the Hero, Beacons (summon Mega World Bosses), new allies, new materials, mounts and more. It is absolutely loaded down with new stuff to create. Fun fact: Neon Ninja also receives an Amperium costume here. Part of these new adventures are the “Rampages”. Rampage bosses are essentially giant evil Kaijuu (huge monsters), and when these occur, a huge alert pops up on everyone’s screen that says “AMPERIUM ATTACK” and with it will come a huge monster in Neon City. They are absolutely titanic in size and are not to be underestimated. They all have their own unique looks and abilities and even cut swathes out of buildings with their strikes. 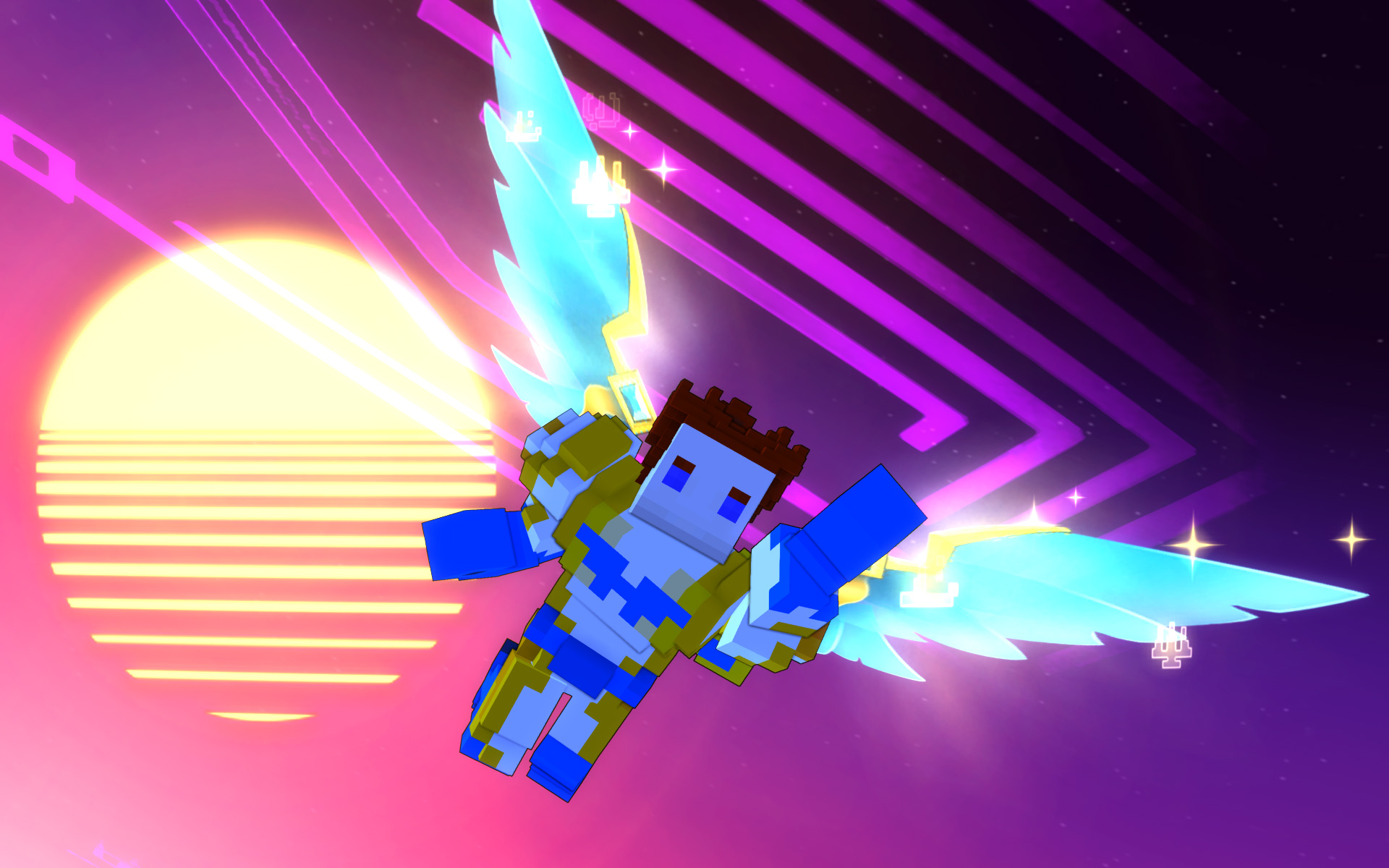 I don't know what could make this feel more 80s.

These work like Pinatas, so every player can come and contribute. Players aren’t going to be hitting hard, but as long as you hit it, you can contribute. When these events happen, several are going to be rampaging at once. Titanic Tentakiller (I’m sure you can guess what he has), C455-ANDRA (with her gigantic building-cleaving sword), and others will rain destruction. These also drop Sentient Shards, which are the most important crafting material in this update. They’ll happen fairly often and so anytime there’s a challenge, there’s a chance these can happen. Back on track, when you craft a Beacon, you can throw it down in your Club World and spawn one of these Mega World Bosses and attack them as a club. You could make a huge “Death Pit” to summon it in, so you have a guaranteed Sentient Shard.

One final thing of note is that the Welcome Screen was revamped. It’s more streamlined; before, there were simply too many things going on, all slapped on there at once. Now, there is one big thing to be cycled through, and a pair of slightly smaller windows on it with other important moments (Weekly bonus, today’s Daily bonus, things of that nature). Clicking on that Daily Bonus tab will show each Daily bonus, which is now themed (Shadow Day, Gathering Day, Gem Day, Adventure Day, Dragon Day, XP Day, Loot Day). They wanted to take the days that were less compelling and make them more appealing to log on during. So while it’s not a massive change, it is something that is easier to read. There are also a host of bug fixes and cleanups,the Dracolyte revamp new Dungeon types in Luminopolis and more. March 27th is the update day, so don’t miss out on this huge content release for Trove!

They cleverly evaded my query about Sentai/Kamen Rider costumes for the heroes, and I am also waiting on a ‘Booster Gold’-themed costume.