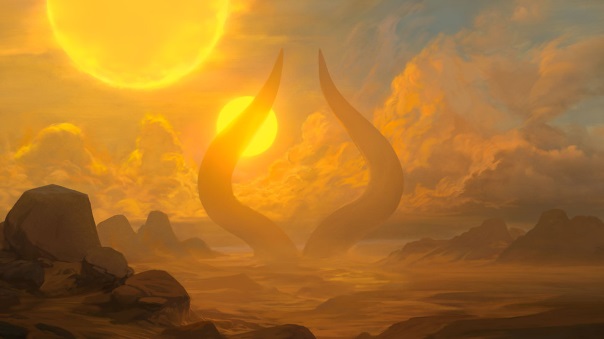 “It is not enough that I win. Others must lose.”

Anyone who has kept up with this column knows I enjoy one thing above all others – nullifying the fun for anyone except me. But my preferred way to play Magic the Gathering is control. More to the point, I love decks that make people stop and pause, and really consider what’s going down. To that end, I prefer “creatureless control”, because a very popular style of card is creature counter/creature removal. In your average deck, I make a large portion of it suddenly useless, because the only creatures I might play will be yours, and that’s only in very rare situations. When I played FMN/tournaments/etc, my favorite deck when it was standard was Esper Creatureless Control, based around Planeswalkers. This deck has one copy of Teferi, but I don’t really use him often. He’s there as a “just in case”, if I happen to be lucky and have the board locked down enough.

Much like the last deck I published (UB Scarab God) this is not a deck that wins in four or five turns. In order to win quickly with this deck, you need two copies of a particular card in your starting hand, and a steady flow of White and Blue mana. So what’s the winning card in this deck? Approach of the Second Sun! It’s a Sorcery that reads if you cast it, and you’ve already cast a copy of it from your hand before, you win the game. The beauty of this, if I read my rules right, even if a card is countered upon casting, it’s still “cast”. This card does not read “put into play”. All you have to do is get the card on the “stack” (RE: cards and abilities that are waiting to be resolved go here).  The important thing is, when Approach of the Second Sun is cast, the game (physical or digital) does not check to see if the first cast was “resolved”. Your opponent can counter the first one, and as long as the next one goes through, that’s it. If the second is countered however, you don’t win. So, you can bait with the first, and wait until the right time if you have a second. This is how we win – with the opponent having little to no control over it. For those interested in the errata of Approach of the Second Sun, click this link.

Characteristics: This deck can change with flavor/approach to the game, but it is hard control, no creatures, just instants, sorceries, card draw. I’ve seen people run a few angels and soldiers/humans in it, but that’s not how I like to play. Though I did craft an alternate version of this deck that has a pile of legendary angels in it, but it’s just not as reliable for me. It might be how I built it, but I can’t be sure until I try it more. The key is to learn what your opponents win-con is, and deny it at every opportunity. You’re going to give them mana if they swing a lot (Settle the Wreckage), but that’s not relevant. They can have 15-20 mana on the table, but what good is it, if you keep denying them the opportunity to do anything with it? You have a lot of options for card draw, but do not be afraid to cycle cards instead of hard casting them. The name of the game is patience. Sometimes you just have to take some damage. Even if you get down to two life, don’t sweat.

Strong/Weak Matchups: The hardest matchup I’ve had is honestly, other control decks. Especially if they’re patient creatureless decks, Teferi decks or Nicol Bolas decks. There are certain cards that hurt too, like Torment of Hailfire. Especially if they dump all of their mana and I don’t have the mana/cards to stop it, it can be a one-turn kill for my opponent. The other major weakness is a hard-hitting/aggro deck that gets off the ground and I have a poor draw. Other than that, if I have a solid draw I can stop anything and anyone. Slow, midrange decks like dinos that don’t get going or decks that focus on one or two attacking creatures (R/U Wizard/Sorcery decks for instance) can just be mashed into pieces if they don’t have the counters to stop me from stopping them. It’s definitely a thinking man’s deck, where you can play serious mind games with people. It’s my favorite way to play MTG, hands down.

Multi-Colored:
Teferi, Hero of Dominaria (x1)(1U1W3C)(Planeswalker – Teferi – 4 Loyalty): +1 Draw a card. At the beginning of the next end step, untap two lands. -3: Put target nonland permanent into its owner’s library third from the top. -8 : You get an emblem: “Whenever you draw a card, exile target permanent an opponent controls”
Lands:

Plains (x7)
Island (x8)
Ipnu Rivulet (x3): Tap: 1C Tap, Pay 1 Life: 1U. 1U1C, Sacrifice a Desert: Target player puts the top four cards of their library into their graveyard.
Glacial Fortress (x2): Comes into play tapped unless you have an Island/Plain in play. 1U or 1W
Irrigated Farmland (x4) Plains/Island. 1U or 1W. Cycling-2C
Field of Ruin (x2) Tap: 1C. 2C, Sacrifice Field of Ruin: Destroy target nonbasic land an opponent controls. Each player searches their library for a basic land, puts into play and shuffles their library.

Final Thoughts: I’d like to put one or two more Glacial Fortresses in this and reduce the Island/Plains count by one or two each. I think it would still be a sound investment. I’m considering also taking out Teferi, as I seldom get any use out of him. I’d probably replace him with another Negate, if I’m being honest. This deck is smooth, it’s fun, and it’s absolutely infuriating. I’ve had people ragequit just because they saw I was playing creatureless, and got the first Second Sun cast. I’ve also found it hysterical to get the first countered, and play the other two in my hand until one gets through. This is a deck of patience, trickery, and just bluffing. Take some time on each turn! Make them think you have nothing, when you really have a few lands. Let a spell get through to make them think everything is fine, then on the end of their turn, make it disappear in a puff of smoke, and a tsunami of tears and hurt feelings. It’s time to play Big Boy Magic. This is the route to go to lose friends and alienate people, but on the plus side: You will probably win. Isn’t that what matters? This deck right now has something like an 80%+ winrate. It’s beautiful, it’s ridiculous, it’s MTG Arena.