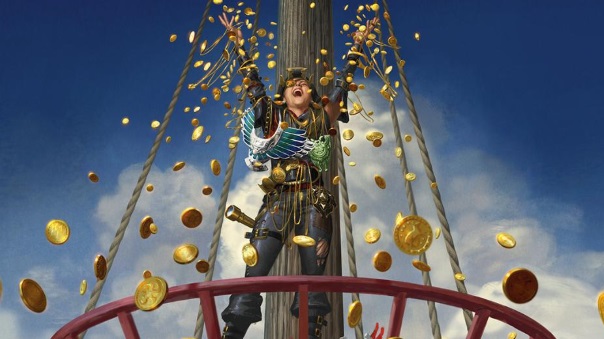 Welcome to another Topdeck Tutor! With Magic the Gathering: Arena on the horizon, I wanted to consider another deck that would, in real life, be cheap to build, but also be fun and annoying. When I realized that Sea of Thieves drops today, I knew what I had to do: Build a pirate deck! Today’s build is a Standard Meta deck for MTG, Red/Black/Blue (Grixis) Pirates. You’re going to see Treasure token/artifact a lot. It’s a token that you can sacrifice to gain mana of any color.

Like I said last time, Magic: the Gathering is an incredibly expensive game. Competitive tournament decks are in the hundreds if not thousands of dollars if you really want to stomp and be competitive. But this deck should only run you around thirty to forty dollars if you were to build it in a real setting, and it brings crazy annoying synergy to it. It’s a pirate deck, and each of the colors does what it normally is best at: Blue counters, draws and creates Treasure Artifacts. Red deals damage creates opportunities for more damage and creates Treasure Artifacts. Black kills creatures, deals damage, and creates Treasure Artifacts. So you’re probably asking “What the hell are Treasure Artifacts?” and that’s a fair question. It’s a colorless artifact that you tap and sacrifice to generate one mana of any color for that turn. And you can make dozens of them. You will never run out of that glorious temporary mana. The mana curve is strongly leaning towards 2 and 3, so that’s the majority of mana costs you will see. There are a few bigger (more expensive) cards for the late game, or for when you want to burn some of those Treasures to make someone very sad out of nowhere. 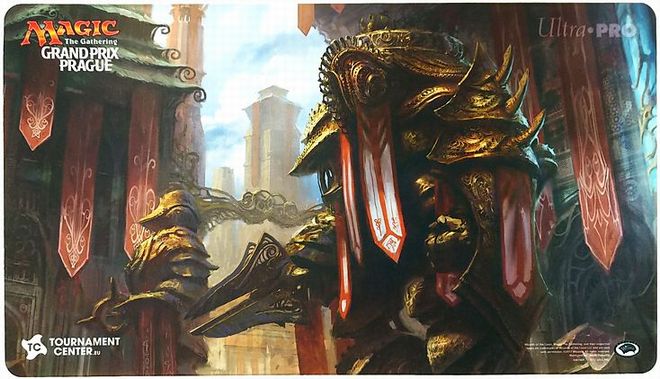 The best wincons give your opponent no choice but to lose.

That’s the beauty of this deck. Unless your opponent can wipe your permanents off the board, he just has to wait for you to do something crazy like drop Deadeye Plunderers (5 drop Blue/Black Creature, gains +1/+1 for each artifact you control, and can create its own Treasure artifacts), after you played Brass’s Bounty (7 drop Red Sorcerery, create a Treasure artifact for each land you control) and it’s feasible to do this on one turn. It’s well within your sphere of influence. So you can use your treasure to burn mana and create annoying things to deal with, or you can simply cast Revel in Riches (5 drop, Enchantment, Whenever a creature an opponent controls dies, create a Treasure artifact. If you have 10 or more at the beginning of your upkeep, you win). This is my preferred way to win, because anyone can flood the field and attack. But a true master of the seven seas takes an opponents ability to win out of their hands. Almost everything in this deck creates Treasure tokens, and you’ll have more than enough ways to slow the game down to your pace while you wait out Revel in Riches if that’s your ideal way to win, and counters for their destruction attempts. Or you can simply play Angrath, get his ultimate, and cackle as they die. The choice is yours!

Characteristics: This is a synergy/control deck that actually gets to play creatures! Or you can play it as an aggro/rushdown, it’s pretty flexible like that. I tend to play stuff like this for the late game, holding out for Revel in Riches, and hold an alternate winning condition in case that takes far too long. Normally I play creature-light decks, but this is far too good to pass up. It’s fairly land-heavy too, with a few cheap dual-lands (come into play tapped though), and with the treasure tokens, it won’t take long to play whatever you need in a pinch, so cost isn’t really all that bad. A weakness in this deck is that some cards need you to attack that turn, and while it “can” be played aggro, it truly shines when you play the slow control game. But there are options that let you do both that will be seen in Captain Lannery Storm (3 drop Red Creature, When they attack, gain a Treasure artifact. Sacrificing a Treasure gives Lannery Storm +1/+0 until end of turn. 2/2) and an alternate Treasure Win with Mechanized Production (4 drop Blue Enchantment – Aura, create a token at the beginning of your upkeep that’s a copy of enchanted artifact. If you control 8 or more artifacts with the same name you win). So, you just apply the Aura to a treasure token and cackle. 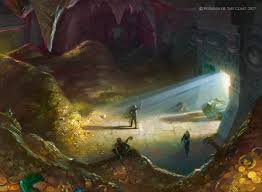 Behold: Whether the light touches it or not, it's yours.

Strong/Weak Matchups: Late-game massive creature decks will probably have a hard time dealing with this, because by then you’ve already set all of your plans in motion, and will have sufficient means to stop whatever dumb attack they try. However, any deck that can disenchant/dispel/board wipe artifacts will be a nightmare, because without Treasure artifacts and a means to produce them, you’re probably not going to win unless your creature game is strong post-wipe. You only have a few solid counters and creature killer cards, so you have to figure out what your opponent is doing, and channel those into stopping them. I highly advise holding at least one counterspell for saving the cast of your two wincon cards (Revel in Riches/Mechanized Production), because if you can get both out, that will be a fast way to get the win. Once it’s locked down, there’s not a whole lot your opponent can do except try and make you burn your treasures.

Contract Killing (x1) (3C2B): Destroy target creature. Create two Treasure artifacts.
Forerunner of the Coalition (x1) (2C1B): Creature – Pirate. When it enters the battlefield, search your library for a Pirate card, reveal it, shuffle deck then put it on top. Whenever another Pirate enters the battlefield under your control, each opponent loses 1 life.
Grasping Scoundrel (x1) (1B): Creature – Pirate 1/1: Gains +1/+0 as long as it’s Attacking.
March of the Drowned (x1) (1B): Sorcery: Choose one: Return creature card from your graveyard to your hand “or” Return two pirate cards from your graveyard to your hand.
Revel in Riches (x2) (4C1B): Enchantment: Whenever a creature an opponent controls dies, create Treasure artifact. At the beginning of your upkeep, if you control ten or more treasures you win.
Vraska’s Contempt (x1) (2C2B): Instant: Exile target creature or Planeswalker. Gain 2 life.
Wanted Scoundrels (x1) (1C1B): Creature – Pirate 4/3: Whenever it dies, target opponent creatures two Treasure artifacts.

Angrath, Minotaur Pirate (x1) (4C1B1R): Planeswalker – Angrath: 5 Loyalty: +2 – Deal 1 damage to an opponent and each of their creatures. -3: Return a pirate card from your graveyard to the battlefield -11: Destroy all creatures an opponent controls. Angrath deals damage to that player equal to their total power.
Deadeye Plunderers (x1) (3C1U1B): Creature – Pirate 3/3: Gains +1/+1 for each artifact you control. Tap 2C1U1B: Create Treasure artifact.
Dire Fleet Captain (x2) (1B1R): Creature – Pirate 2/2: Whenever it attacks, gain +1/+1 until end of turn for each attacking pirate.
Dire Fleet Neckbreaker (x1) (2C1B1R): Creature – Pirate 3/2: Attacking Pirates you control get +2/+0.
Storm Fleet Sprinter (x1) (1C1U1R): Creature – Pirate 2/2: Haste. Storm Fleet Sprinter can’t be blocked.
Storm the Vault (x2) (2C1U1R): Legendary Enchantment. Whenever one or more creatures you control deal combat damage to a player, create a Treasure artifact. At the beginning of your end step, if you control five or more artifacts, transform (flip) Storm the Vaults. Flip: Tap: Add one mana of any color to your mana pool. Tap: Add 1U to your mana pool for each artifact you control. 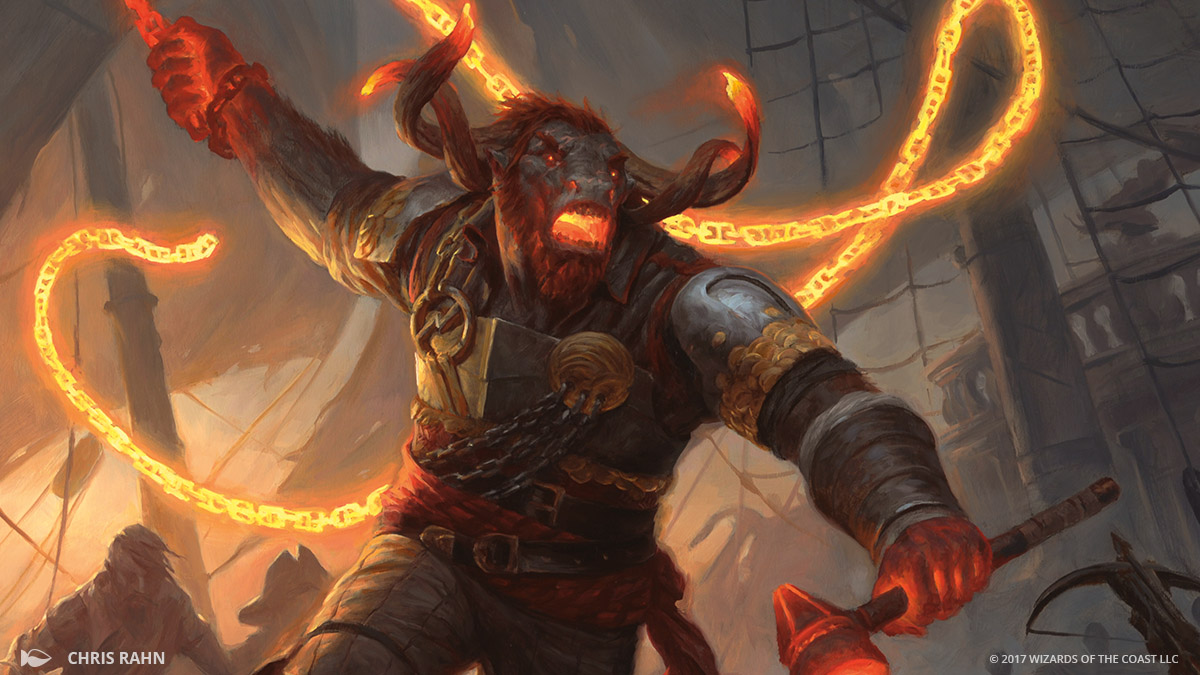 Angrath does not mess around.

Thoughts on Cards: Honestly, I love this deck, and I’m seriously tempted to put it together if I had time to go to Friday Night Magic. I doubt it would win a ton of 1st places, but it would be fun and annoying. I love how well this deck works together, with so many cards creating the Treasure tokens you need to either win or set up an alternate win. I am considering replacing the Pirates that require attacking, but I’m not honestly sure what I’d put in their place because I could not think of other pirates that would go well in those spots. I could always replace them with more copies of counters/creature damage, but then I’d have fewer creatures, so it becomes a balancing act. It certainly depends on what my opponent is doing in the first game. Revel in Riches and Mechanized Production are two of my favorite cards in the entire current standard meta. Sure, you could play Mechanized Production on one of your Treasure tokens, but why not also consider applying it to your Vanquisher’s Banner or Gleaming Barrier? Barrier would create a frustrating wall of defenses, and Banner would make giant, annoying Pirates. Both of these are exciting, fun choices that are sure to frustrate. If I could find more ways to keep my enchantments safe, this would wind up being a safe, cheap win.