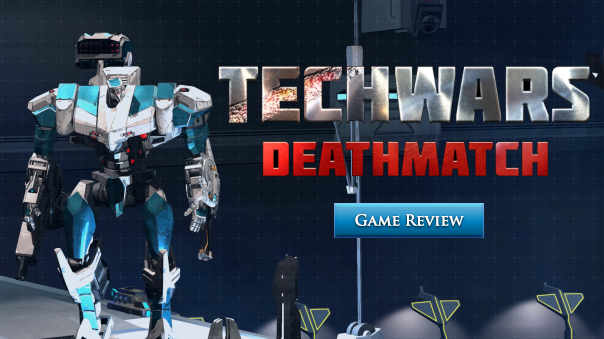 Mikhail Vlad’s Techwars novels have led to a treasure trove of games. While most of those titles are strategy RPG or MMOs, this latest Techwar title, Techwars Deathmatch, focuses on what makes mech-based games really exciting to play- fighting with them in real time.

Techwars Deathmatch doesn’t move away from the novel’s world as its setting. At the start of the game you will be asked to side with either the American KATO corporation or the Dominion. This determines the mechs you can purchase and unlock as you level up.

Being an action based mech battle system, Techwars Deathmatch uses a combination of keyboard and mouse controls to pilot your mech. Matches are won by getting the most amount of points before the match ends. Players from both factions need to whittle down the opposing team’s score by destroying the opposing battle mech, and trying not to get destroyed themselves. The game deducts points from the team that gets their battle mech destroyed, regardless if it was because of enemy fire or pilot error, so avoiding destruction is a must.

The game sets out battles in four maps: Siberia, Kazakhstan, Sochi, and Alaska. Each faction starts out in across two starting points. Each player must decide from one of the five battle mech classes: Stormtroopers, Scouts, Destroyers, Supports, and Titans. Players have to fight within these deserted areas and destroy each battle mech from the opposing team. Pilots can hide in-between buildings while shooting each other out using the three weapons each class is equipped with. Argus Games designed the field to have destroyable structures so that buildings can be shot out by crossfire.

Battle Mechs were also designed to lose limbs and the weapons equipped as they get destroyed by the enemy fire. This adds a bit of reality for the battles and forces players to think about battle mech placement during fire fights.

Currently, Techwar Online’s choices of Battle Mechs are limited to the five classes mentioned earlier. Each battle mech class has its set of stats: Health, Speed, Dimensions, and Max Damage. As of this post, there is only one battle mech available per class per faction, so there isn’t much in terms of customization.

Each battle mech currently has three weapons equipped. Both arms have their own weapon, plus there’s a third shoulder weapon that you can use simultaneously with the arm equipped weapons. However, you can only use one of the two arm weapons at a time, since you need to switch between the two to avoid overheating.

Also, each battle mech you have has its own set of active abilities that fits the class it belongs to.

I love how Argus Games designed the battle mech to feel heavy and clunky. The design adheres the MechWarrior style of gameplay where you need to face opponents before being able to properly fire at them during matches.

So far, the battles in Techwar Deathmatch either swing towards really intense shoot outs as pilots from both teams actually face-off in the field, or boring wait-till-time-runs-out matches while opponents are camping each other’s spawn areas.

During intense matches, I loved how you need to properly pilot the battle mechs and use cover while battling against the opposing team. I also liked that you can’t just simply camp on buildings because the cover would crumble under enemy fire. Frantic battles feel authentic mech since the clunky controls make you feel like you are piloting a hunk of metal.

Meanwhile boring matches, which happened to me around 3 matches in 10, will force you to just wait for the match clock to wind down. Opposing teams would camp out in your spawn area and just rain on you as you spawn in-game. That was pretty annoying, but it seems like that’s the protocol in matches like this especially for the bigger maps. This kind of spawn camping, while is good for the ones doing it, kills the whole gameplay experience. The only time I was able to successfully get away from spawn campers was when I finally was able to know when to use the battle mech boost to reposition myself once I’ve been spawned into the field.

So far, my experience with Techwars Deathmatch has been brutal. Since the game doesn’t have a tutorial mode, I had to give away a few early matches to learn the controls and get the hang of things. Furthermore, since I immediately started PvPing, my starting experience was terrible since I met with spawn campers for the first few matches. The game doesn’t have that breathing period for new players to get the hang of the game, and it’s especially bad once more players get into the game. Argus Games will lose more people this way.

The game also lacks content. You just get into the game aiming to unlock all the battle mech classes, and you don’t have anything else to encourage you to keep on playing. It feels like Argus Games designed Techwar Deathmatch for Techwars fans rather than be welcoming to new players. That’s not good, especially in this day and age, where developers need to at least allow people new to the game to explore what the game can offer. I know that the price tag for the game isn’t that high, but at least have people give more reason to invest their time playing the game, instead of just letting them go through the motion of joining, getting disgusted with the current system and leave.

Here’s the thing: Techwars Deathmatch, while feels like a basic mech shooter, is a solid mech game. The controls remind me of my Mechwarrior days, and the environmental damage including the intense firefights make me feel like I’m in an actual mech battle. But it’s overshadowed by the barebones gameplay and content, and coupled with really unhelpful player practices will kill the game before it even flies.

If Argus Games had more time developing the game I strongly think Techwars Deathmatch would be a solid multiplayer game out in the market. They just need to work on the game more.