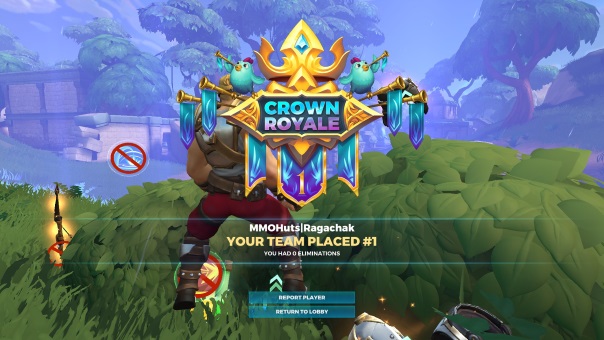 Good morning, Internet! I spent much of this weekend watching E3, which only featured a few things that honestly and truly excited me (Online Fallout 76? Absolutely on board for that), the rest of the time was on either Realm Royale or Paladins on the Nintendo Switch. This is a pair of games in an ordinary situation I probably would not play much of, but I fell in love with the style, look and gameplay of Paladins quite early on, and I’ve never been shy about talking “Battle Royale” games. To the point, I think they’re trite and boring. Playing as a generic nobody who snatches up a few guns in hopes to be the last man standing? Ehhh… I don’t get the appeal. But Realm Royale started out as a Paladins game (which did appeal to me) became its own entity within the Paladins universe. So I want to chat very briefly about those because I had a lot of fun looking at these. I’d also like to say as an aside, whoever was responsible for getting Paladins to the Switch, maybe they should receive one. I’m just saying, it could not have been an easy task! They deserve a medal. Or a console.

Paladins on the Switch in Brief:

Honestly, I’m a little disappointed the Cross-Play isn’t for the PC or the Sony Playstation 4, because those are where I play the most, and know the most people who play. That would offer me a lot more options as far as playing with my friends. But that’s okay, at least there is cross-play, and the Microsoft community ought to be fun to play with. I spent a fair amount of time playing this weekend, mostly grumbling about having to rebuild all of my card sets, but grateful that my Switch is next to my PC, so it was nice and easy to look at one screen then the other. It plays beautifully, whether it’s in docked or portable modes, and I’ve tried it in both extensively. The only major complaint I have so far is that the load time for the initial load is incredibly long, just. . . it drags for what seems like a nightmarish eternity. The other load times are pretty solid, but the initial one feels like a few minutes.

I prefer to play in docked mode, so I can use my new controller for the Switch, but it does work pretty well in the portable mode too. The aim is sharp, and it doesn’t lag in the least. If it does, it’s because of my lackluster Wifi and less the actual game itself. The only hard thing for me personally was tagging different abilities between L/R ZL/ZR, as they’re kind of close together on the joycon, but that’s a structural choice that I simply have to live with. I did not play Paladins much on the XB1 or PS4, but I see the appeal behind playing the game with a controller. Some people will probably say that it “sucks” because Keyboard and Mouse is superior, and blah blah blah. Let ’em. If you enjoy using a controller, that’s fine. Don’t let some dork shame you in your choice. I do have to say though, that the Switch was in need of a fun online game to play, and I’m glad Paladins was first to market, before Fortnite, before MTG, before anything else that’s popular right now.

As of this writing, it goes live tomorrow, where interested parties can buy-in with the Founder’s Pack (29.99) which will give all future/present/past Champions for Paladins, and the game is about caught up to the current product. All we’re missing is the Rise of Furia update, which is supposed to be coming soon. Not to mention it looks just as sharp and pretty as Paladins does on PC. I think I need to adjust the camera motion/aim just a little, but that’s just console life, I’m afraid.  Other than some of the load times being vexing, the actual gameplay is smooth and enjoyable. No lag, just the same action I have come to love on my PC, just handheld.

Crown Royale: The liquor that eats like a meal. Like I said before, I don’t get, nor do I enjoy Battle Royale games. Part of it is surely “mad because bad”, but I wasn’t invested in the genre to start with. I’m glad for their success, and I’m prepared for this year and the years to come to overwhelm my news feed with every new AAA title having a Battle Royale snuck in somewhere, but none of them I’ve seen yet have the same charm as Realm Royale. I liked the idea of the Paladins version because there was a chance of me getting Torvald and ulting people to their doom, right back into the death fog. But the random nature of selecting a champion really bothered me. There are so many characters in the Paladins cast I do not play (mostly because I prefer to heal/tank). So when I saw Realm Royale grow into being its own entity, and frankly it feels more like an MMO now. That’s been said a lot, but I stand by it. You pick a character class, which has its own abilities, which are rooted in the Paladins universe, and so are the weapons you find scattered about.

It feels like the last man/team standing becomes a Paladin, whether you want to work for the Magistrate or fight him, and there’s a really interesting story that can be told here. But as it’s in its Alpha State, we’re more focused on gameplay, shining that up, getting the important stuff squared away. There’s so much to learn in a game like this. Each class plays differently, has different potential, synergy with the other classes, and all will come down to teamwork, communication, and hard work. Do you want to rush to get an early kill and try to get a legendary weapon? Or will you just wait for someone else to get one, murder them and take it (assuming you can wield it at all)? Routes to take, team compositions to find, there’s a lot going on here. Or you can just queue solo now, and be all in for yourself. I’d rather queue as a squad, personally. Duo’s are okay, but I’m not good enough to have someone else relying solely on me. I’d just feel like an albatross hanging ’round their neck.

I feel like an important metric for games like this is their ability to pull in players who normally don’t play that style of game (BR in this case). My bridge in this time was Paladins, and I stuck around for the smooth gameplay. I won’t lie, or exaggerate – I love Crown Royale. I may be terrible at it, but I have gotten a few wins and a few third place victories, and they feel so, so, so good. It’s already reached 100k CCU’s on Steam, and continues to grow strong. There are some pretty cynical people out there, “Lul Hirez paid Ninja to play their game” … Seriously? Why can’t people just be glad for someone’s success, with their game being successful? A lot of very popular Battle Royale streamers have picked it up and seem to sincerely enjoy it, and a lot of Paladins fans also came over to give it a whirl. I am a bit confused on the metrics for rank (Silver 1 presently) and am curious what sorts of options we’ll have for cosmetics, but as it stands, the gameplay itself is very strong. I do hope there will be a “Support” class coming at some point, but for the time being, Engineer is as close as it gets. I don’t think there will be a “Support” class added because it would be ultimately ineffective in Solo play, and you don’t want to have a class not be playable in all modes.

tl;dr: Realm Royale is a blast, and I’m looking forward to making content for it.