Summoners & Puzzles is a free mobile game developed by Electronic Soul. Describing itself as a mix of “Match-3, RPG, strategy, and Adventure,” the game manages to mix two common types of strategy games in an unlikely way that grows on you the longer you play.

You take on the role of a young prince who must save his sister, captured by the Evilking. Along the way you must overcome challenges and recruit new allies to your army. Like many mobile strategy games, gameplay is divided into multiple levels (known here as Chapters), each of which is also divided into stages. In each stage you will face a pre-determined army and must defeat them in order to proceed and claim your rewards. Each army has a combat rating, expressing the strength of the army, which allows you to determine if your army is capable of facing them. As a summoner, your army is comprised of ‘monsters,’ not elite units, though many of these monsters are humanoid allies.

Battles are a core combination of army defense games, where two armies of summoned units clash on a battlefield until one is defeated, and Match-3 games, where identical units are matched on a puzzle grid. Each battle starts with the Match-3 component, where the pieces to match are your available units. You may pick up a unit from any position and swap it with another, with the goal being to match three or more units in a horizontal, vertical, or diagonal line. As you make these matches, two things take place: the units on the board combine into an upgraded unit, and the units you used to fuse the upgraded unit are sent to the battlefield. For instance, matching three white Furballs creates a green Furball on the board, and three white Furballs join your Hero unit on the battlefield itself. Units can upgrade several times this way, with each upgraded unit being stronger than the last. You can also choose to drag and remove a unit from the board directly, which is most useful when you have created the highest unit level possible on the board. 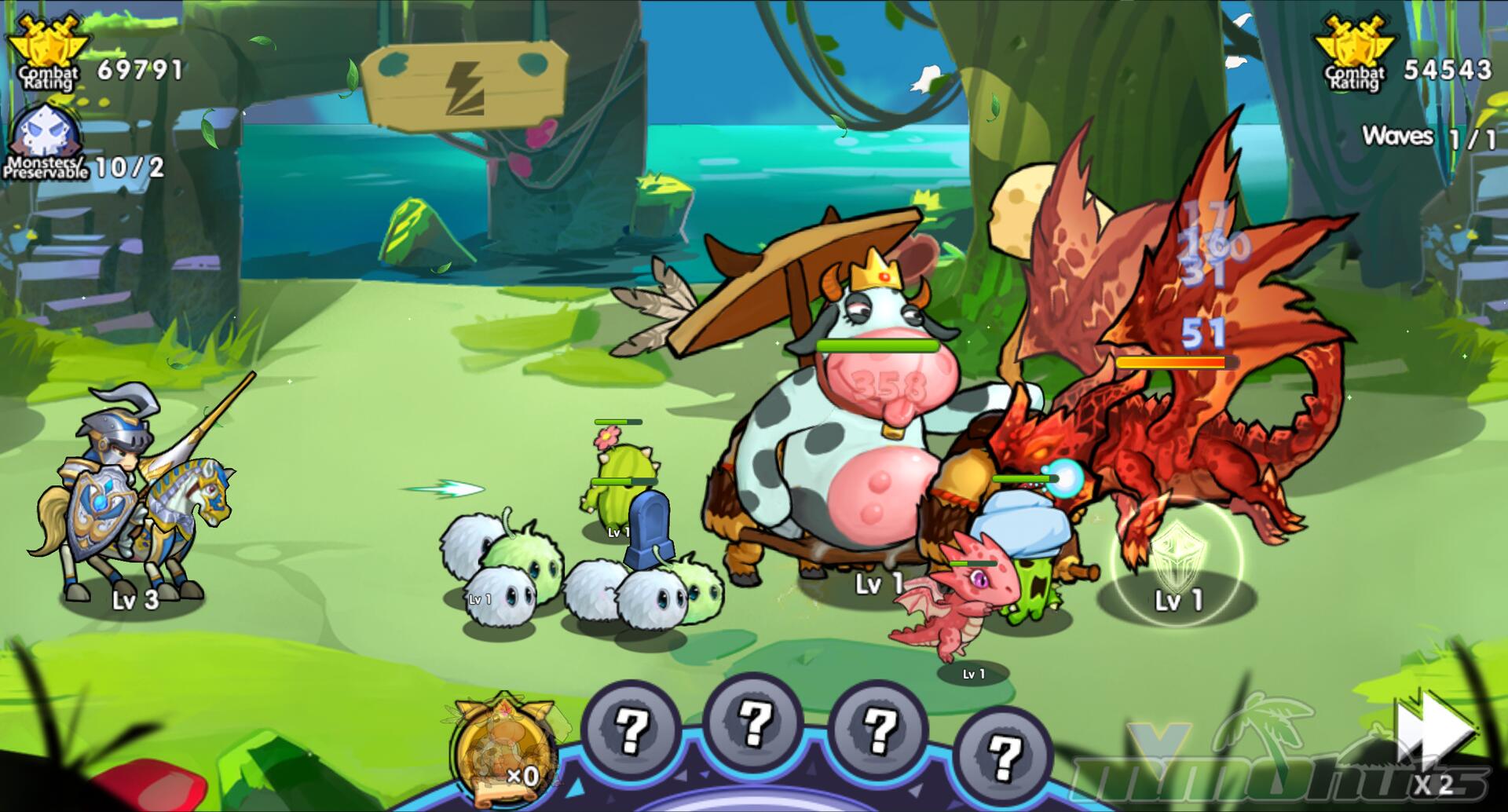 Summoning Forth a Mighty Cow - to Beat Down an Epic Dragon?

In each battle you will have a set, limited amount of terms to match units in the puzzle grid in order to summon and build your army. While you may not get strong units immediately, your board carries over to each battle or stage within a chapter, allowing you to strategize and build up units for the most difficult battles. When your turns are over, the battle begins. Your units and Hero will move forward and attack the oncoming army automatically, and you can sit back and watch the action (and even speed it up). Elite units also have skills that can be activated during battle manually by clicking the button that appears near them on the battle screen. There are also monster scrolls, which allow you to summon extremely powerful units to you for one battle. When the battle is over, your hero will take only the strongest battle units from your army into the next battle with them, even if others survived, but this gives you a chance to really build a strong army for the hardest battles.

You can bring three monsters (units) into battle with you, and change them between battles as you like. Each monster is divided into families, representing their common and upgraded forms. Earning and upgrading the core stats of these families requires collecting their cards – found in stages, reward chests, and cash shop chests. Each unit family also has a set of skills which can be learned and upgraded, and will be used automatically in battle (except for the elite unit’s skill.) In later game play you can awaken units, allowing you to constantly be improving your army of summons. Some units also have alternate costumes available!

In each Chapter, your Hero also can earn and assign Talent points. These talents are temporary, lasting only for the chapter you are in, so you don’t have to fear about your commitments long term! Talents will allow you to specialize your hero, granting your hero and army various benefits depending on your choices and upgrades. Some choices will also change the appearance of your Hero, though you can choose to always keep your default hero appearance.

In addition to the story chapters, there are multiple challenges you can partake in, from a PvP arena to treasure chests, mine defense, and more. With regular updates and a really bright, fresh graphic style, Summoners & Puzzles is definitely worth trying if you enjoy strategy and RPG!