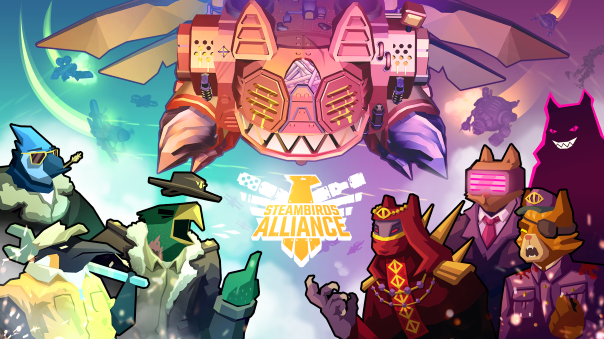 Bullet hell games were never really my jam growing up. I was fascinated with the arcade game Raiden II though. When Raiden DX released on PlayStation, I picked it up and played through it to the end. There have been a couple other bullet hells I’ve played, but the genre just doesn’t hook me.

Which is why I was moderately surprised I had so much fun playing Steambirds Alliance by Spry Fox. Turns out some of the Spry Fox crew worked on the game Realm of the Mad God, so any resemblances aren’t coincidental. Steambirds Alliance is billed as an MMO bullet-hell/shmup (short for shoot ‘em up) with permadeath. It’s a fascinating game concept, and is more than a little addictive.

You begin Steambirds Alliance with access to a single aerocraft: the Quad. As you reach level thresholds with your vehicles, you will unlock additional new vehicles. For example: reaching level 5 with the Quad will unlock the Paladin, while reaching level 15 unlocks the Shieldmaiden. Below is a chart that shows the full progression branches, as listed on the Classes page of the Steambirds Alliance wiki.

Each craft has its own stats: Damage, Armor, Armor Self-Repair (regeneration), Max Steam, Steam Recharge, and Super Speed. Stats may be improved by increasing armor or weapons, sometimes in ways that might not seem directly related, such as an engine giving a boost to damage.

Damage as a stat should be pretty self evident; it’s related to how hard you hit the enemy. Armor is your craft’s health. Deplete the armor and the craft is destroyed. Steam is the means by which you use maneuvers and your secondary ability. Super Speed is the amount of speed increased when using the super speed ability. Armor Self-Repair and Steam Recharge determine the rate at which Armor and Steam replenish.

Crafts also have a selection of weapons and armor available to them. Most weapons can be used by two or more crafts. The Sword is an exception; only the Paladin may equip it. Some crafts require having certain skill tree selections in order to equip alternate weapons. Some weapons can fire continuously, while others can overheat and require a moment to cooldown before being used again. These weapons tend to be slightly higher damage though, creating a burst fire DPS dynamic vs sustained.

Basic equipment is ranked Tier 0 – Tier 10, with Tier 0 being what is issued to each craft when they are claimed at the hanger. Beyond the tiered gear are craftable items, many of which have elemental properties. I’ll discuss crafting a little later in the review. It’s important to note however that gear doesn’t have level requirements, which means you can possibly leave some pieces in the Rebel City storage for when, not if, you die.

Flip, zip, and hop back, maneuvers are typically meant to help you avoid damage, or get you in position to dole it out.

Each craft also has a special maneuver. Maneuvers are often used to dodge enemy attacks, or to make attacks of your own. Some move you forward, and some move you back. The Old Faithful craft and the Medic craft will do a 180 degree flip when you use your maneuver, allowing you to dodge bullets or avoid collisions with enemies. The Siege Tank craft will actually stop moving entirely when activated, and unleash a powerful cannon, at the cost of mobility.

The skill tree is the method by which your pilot advances. You earn one skill point per pilot level you gain, and unlock additional skills at certain levels. Interestingly enough, pilot levels are actually determined by the level of your craft when it is shot down. The game does boast a “permadeath” model, but really this only applies to your craft. Your pilot keeps their skills, as they eject when their craft is destroyed and are picked up by the bird-brains at command.

Death is truly the only way to advance your skill points, and should be an expected part of the game. When you die, all of your equipped gear, and anything you’re currently carrying, is lost. Anything you store in the Rebel City storage yard remains, however, which means you can get a bit of a head start on your next run. You can also buzz around Rebel City where people drop gear frequently to pick up a couple easy upgrades, if you’ve forgotten to squirrel away some supplies.

Skills may unlock weapons, or they may give an increase to stats. Sometimes they also will decrease another stat, allowing for more focused builds. How you spend your skill points is entirely up to you. Resetting them costs nothing, so you’re able to experiment freely, which I found to be a beneficial feature.

“Time is like a drug. Too much of it kills you.” – Terry Pratchett, Small Gods.
Note: This video’s speed is slightly increased due to long pauses.

The various craft of Steambird Alliance can be separated into two types: hover vehicles and planes. The distinction is an important one, as it affects the control and aiming style of the vehicle. The first three craft, Quad, Paladin, and Shieldmaiden are all hover vehicles. It is by leveling the Paladin to 15 that you’re likely to see your first airplane, Old Faithful. Thankfully the game will run you through a second tutorial (the first happens immediately upon entering the game), in order to give you a moment to get used to the new controls.

Hovercraft may move in any direction using the WASD keys. Whichever button you press is the direction they’ll move. Airplane type craft on the other hand will only move and, importantly to note, fire in the direction they’re facing. When you press the A or D key the craft will rotate in a turn, but will continue with forward momentum. Pressing the W key will accelerate your craft into superspeed (the standard hovercraft keys for superspeed, shift and RMB, still work as well). Hovercraft controls are sometimes referred to as twin stick, and airplane as single stick.

The final bit that sets each craft apart from the next is its unique secondary ability. The Paladin, for example, can activate a healing aura that heals itself as well as nearby friendly craft. The Shieldmaiden likewise has an aura, but it offers an Armor increase for itself and its nearby allies. Old Faithful on the other hand leaves behind a powerful poison cloud that can absolutely devastate anything that flies within its radius.

The green aura of the Paladin heals, the blue aura of the Shieldmaiden defends, and the purple gas cloud left by Old Faithful just messes cats up.

This is one of the things that I really enjoyed about Steambirds Alliance. Even though I only personally unlocked four of the fourteen craft, I enjoyed the ways in which they differed. Each craft really seems to have a unique playstyle. Designing fourteen different crafts that didn’t just feel like a minor variant of another craft actually took some creative engineering.

Speaking of creative engineering, let’s talk about crafting in Steambirds Alliance. In order to craft you will need to reach level 20 on any aircraft for the first time. You may then access the Workshop in Rebel City. I never got quite good enough to make the climb to level 20 on any craft, but the community on the Steambirds Alliance Discord server were thankfully able and willing to fill in some blanks for me. The Crafting page of the wiki was also super helpful.

In order to craft an item, you need materials obtained from completing missions or bounties at the Rebel City Pilot’s pub. There are hourly missions, which may grant copper (used in crafting T8 weapons and armor) and daily Bounties, which refresh at 5pm PST. The Bounties involve hunting down special boss enemies and grant colored steel, which may be used to imbue or increase elemental properties in weapons.

While the graphics of Steambirds Alliance are obviously stylized and cell shaded, they definitely have a certain arcade shoot-em-up aesthetic from the early 2000 era. They’re crisp and clean, and even when things are at their most intense and there are bullets all over the screen, it looks good. I only ever played with keyboard and mouse, but I could definitely see Steambirds Alliance being fun with the controller. Now if only I could find mine after our recent move!

One thing to watch out for is the overwhelming amount of shorthand lingo used in the chat. It can be a bit overwhelming and intimidating. Thankfully, someone compiled a glossary on the wiki. It doesn’t cover everything, but feel free to ask on the Discord or chat; the community is generally kind if you’re polite in your approach.

Steambirds Alliance is available free-to-play on Steam. I definitely don’t feel that the game falls into any “pay to win” traps, but considering you’re only allowed 2 craft in the hangar for free, and have to purchase additional for the approximate equivalence of $5 USD, it can be a bit restrictive. Your storage space can also be increased in Rebel City. People can and do exchange Gold, the game’s currency, in order to purchase high end gear. As far as the game’s cosmetics, most can be purchased either with Gold or with Scrap. Scrap is awarded every day merely for logging in, and also sometimes for completing missions.

As I said at the beginning, I was surprised at the amount of enjoyment I found in Steambirds Alliance. It can be challenging, and overwhelming at first, but if you stick with it you start to pick things up. It can be a good bit of mindless fun. I found myself wandering over to it towards the end of the day, when my brain was feeling a bit mushy, as it’s a great game to just mindlessly zone out and fly around in.  Steambirds Alliance is a solid 4 out of 5 propeller blades, based on its current trajectory.