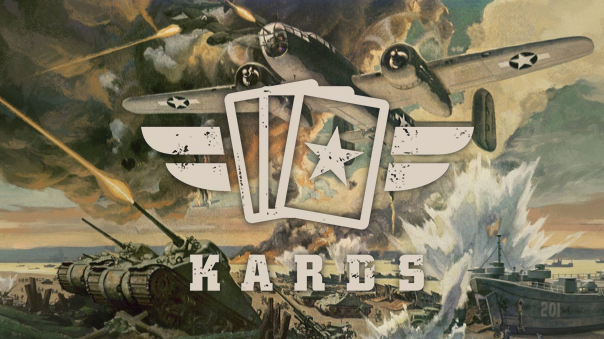 On a conceptual level, I absolutely love Kards. It’s a CCG based on units and vehicles from World War II and replaces the “Mana” of traditional card games with “Kredits”, which I imagine is just a way to make the word “Credit” sound German. The gameplay is fairly simple, and the slow flow of Kredits does add a decent pace (unless you’re playing Germany and use Reichsbank to give yourself 3 Kredits). Ultimately, the goal is to defeat the other player’s base, using Infantry, Tanks, Planes, Bombers, and Artillery. There are also cards that deploy immediate effects (Orders) and Countermeasures. Countermeasures can be triggered from your hand on your opponent’s turn. The middle of the field counts as the “Frontline”, and command of the frontline is the main way your units can attack the enemy base. Only one side can hold the Frontline at one time, so in order to control it, you have to defeat the forces that presently hold it.

In Kards, players build a deck of 40 cards comprised of a main faction and an ally. The allied faction doesn’t have to be a historic ally (so you can run America/Germany if that’s what you want to do), and each of the factions seems to do something very well. For example, Britain is amazing at defense, with tons of cards that improve the health/defense of their base and units. It can be very hard to siege Britain if they get going. Japan has a lot of cards that synergize well with each other, giving +Attack, and often have pretty low defense. They also have amazing fighter planes. If you aren’t certain what deck you’ll want to run, don’t worry! You have to unlock the basic faction decks of all of them by beating them as part of the tutorial. The anatomy of the cards is pretty easy to understand too. The top left number is the Kredit cost, and when it’s played, it becomes the movement/attack cost. The bottom left is your attack, bottom right is defense. It’s important to note that you do not regenerate those defense points at the end of turn. 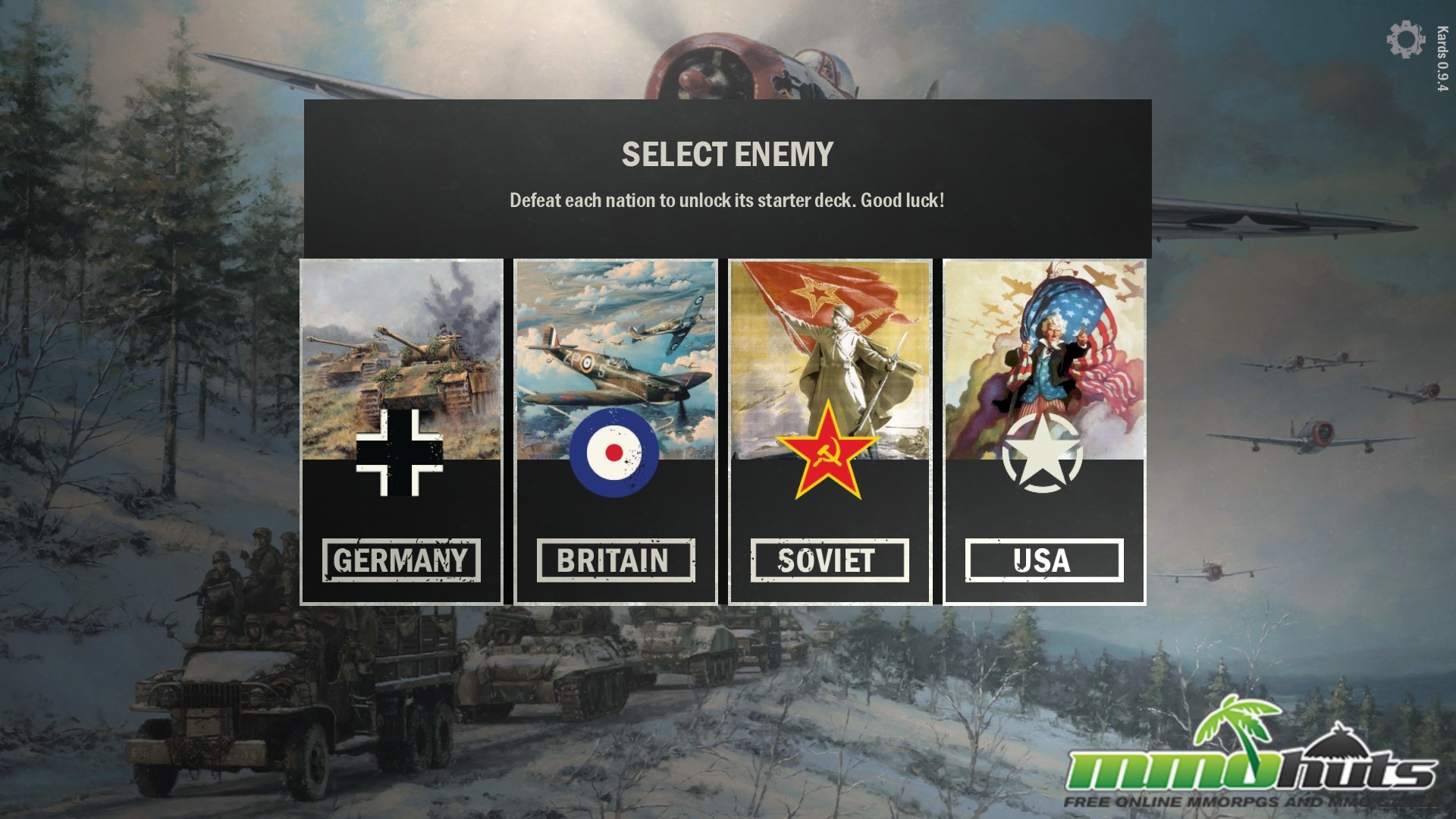 This is a great way to learn what every faction is capable of - by beating them senseless.

I’ve really come to enjoy card games that don’t force you to run lands/resources in your deck, but while the pace of the early game is decent, the longer the game goes on, the greater the potential things have to spiral out of control. If you don’t have card draw, the game can really slow down in the late game, because you’ll have 0-1 cards in hand, but have 15 Kredits and nothing to do with them. This can feel absolutely soul-crushing because once someone has control of the board, with plenty of units on their backline/frontline, it can be overwhelmingly difficult to come back. This felt more prevalent against German decks, with their mighty artillery and bombers. Artillery and Bomber units can attack without receiving damage, except by Fighter Planes. They don’t deal damage back when attacked, which is why you control the Frontline before you deploy these.

Comebacks in this game are very, very difficult to do without card draw. Each faction is, again, very good at something, and you can make up for any weakness with the right pairing of an ally. You can only run 12 ally cards in your deck, but that’s the only restriction. If you have all the right Germany or Japan rares? Run those if they fit your deck composition! I’ve had moments where things felt absolutely hopeless, but that came down to lacking card draw, more than actual card balance. I wonder if they considered being able to spend Kredits on an extra card draw or something. Maybe 3 Kredits? That’s just a hypothetical. But one thing that really makes this game stand out to me is movement and the frontline.

In most card games, Common/Uncommons are not always great, but there are generally incredible, must-picks in both of these rarities that really shake up the game. That doesn’t feel quite the same here in Kards. There are good common/uncommons, but the rarer the card, generally speaking, the better the card seems to be. But there are counters to any strategy in this game, and that’s really key to succeeding. I do also appreciate that the game automatically converts any extra cards into your crafting resource, but if I’ve said it once, I’ve said it a hundred times: I absolutely loathe crafting systems in almost every card game. This one seems like it’s a bit more reasonable in terms of card cost though. 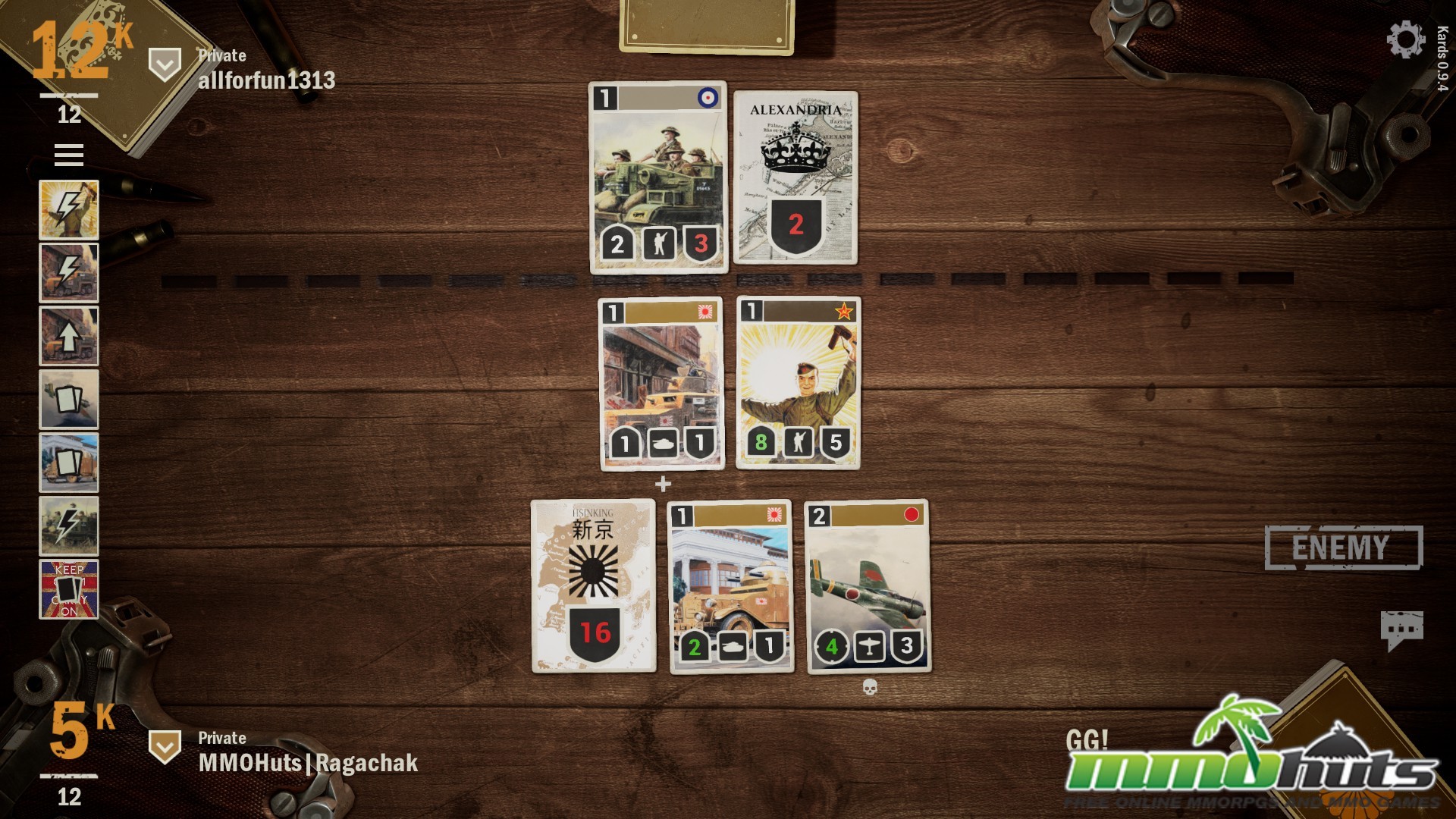 Once you're ahead, it's hard to lose that lead. It can happen, but it's a rough road.

Deploying units from your hand costs Kredits, but moving them or attacking with them also costs Kredits, so you have to carefully consider every move you make, at least in the early game. The longer the game goes on, the less relevant the strategy portion is, when you can move/attack with everything on your field. You must deploy units next to your base (the backline), and unless it’s a tank, it cannot move on its opening turn. The exception is Blitz, which acts like other CCG’s Haste. Tanks and Infantry need to be on the frontline to attack the enemy base, but Fighter Planes, Bombers, and Artillery do not. When the game begins, you really have to consider what every single unit and play is. I find myself holding cards as long as possible so that I have them when the late game happens. Since I prioritize a Japanese/Russian deck, I want to leave my 1/1 tanks that give +1 attack to infantry on the backline. They’re weak, but they can really do crazy things with the right synergy. There aren’t a lot of deckbuilding resources for this game right now, so I can see where not knowing what to do can be frustrating. For me it was all about experimentation, figuring out what style I wanted to run, and finding the cards that let me make that happen.

Perhaps the best thing about this game is the aesthetic. Everything from the card art, to the sound effects when you click “End Turn” really feel like they capture that World War II aesthetic, and it just feels real and authentic. You can also click on cards to see not only what they do, but the backstory of that particular unit/card. I feel like people who are not history buffs might be bogged down by the card names, but I’m certainly not. I may not get them all, but I’m willing to click on them for context. The quiet music, the worn-down wood table, the pistol on the table. Everything about this sets the mood for what we’re doing – playing a card game based on World War II. It reminds me of an easier-to-play Axis and Allies, which is great because Axis and Allies is also great. the game board itself doesn’t take up that whole table, but it’s easy to see where you need to drag a card.

The War to End All Wars: The Sequel: 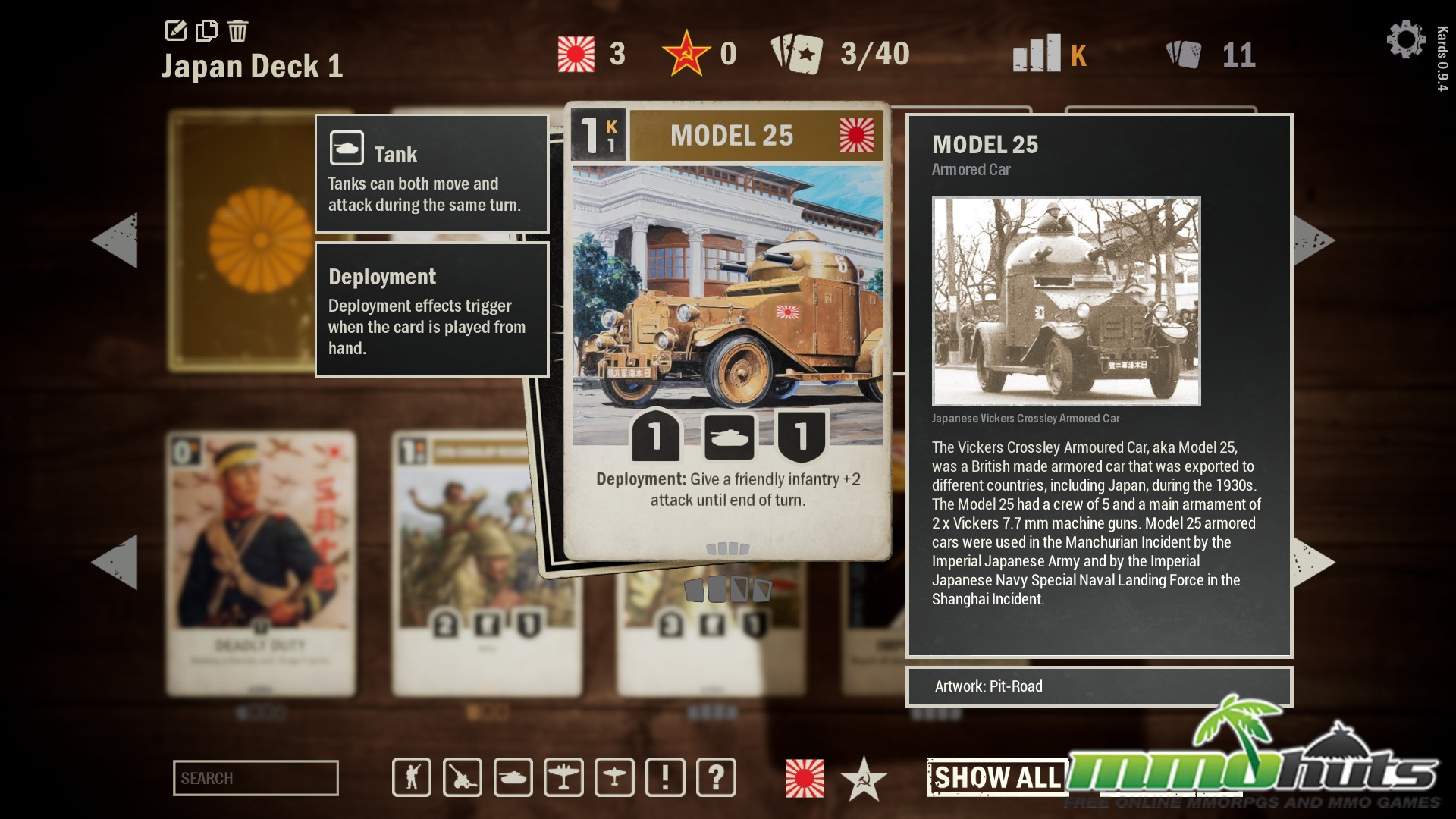 This might be my favorite part - I learned a lot of fun WWII stuff in this review.

I’m not personally wild about the economy, but I’ve done fairly well against other players without investing more than five dollars (the Welcome Pack, which gave a few packs). I didn’t spend any money or worry about decks until I had spent plenty of time looking at what the factions do, and what cards ideally, I wanted to use. I enjoy the concept of the gameplay immensely, but I feel like all of those Kredits just go to waste in the late game unless you have a nice pile of units and card draw, which led me to my thought on having something else to do with those Kredits after X turns. I understand that might not be plausible, though. Kards is a card game I can pick up, play a few matches, and go do something else. Not even this beautiful aesthetic keeps me engaged. I don’t dislike it, but I’m not in love with it either.

The early game is terrific, the mid-game is pretty sound, but if you don’t stomp someone early, Kards can feel incredibly frustrating to sit and wait for one card, desperately hoping it might help you turn around. A good example is not being able to get at my opponent’s bomber and artillery, and they whittled away my entire army because they controlled the frontline. So I had to spend the rest of the game waiting on card after card, putting them into play, only to watch them die in one hit to units that they can’t hit back. That sort of gameplay makes me want to pull my hair out. Part of it is definitely being outplayed, but part of it is definitely the strength of some of the cards. I do like what’s on offer, and I do look forward to seeing more cards and balance come to Kards.