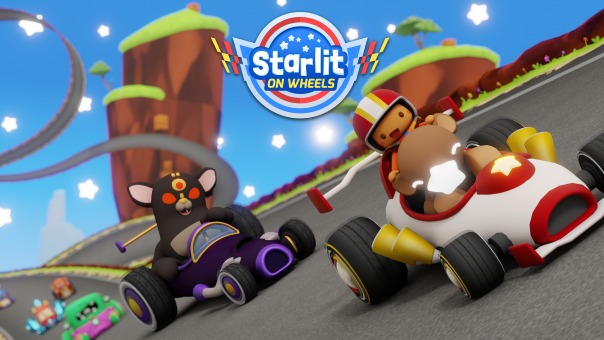 The popular Starlit series (downloaded more than 10 million times) has a mobile kart racer coming this month. Scheduled to release on January 31st, Starlit on Wheels is a free-to-play racing game in the Starlit series and will be available on both iOS and Android phones. Brazilian studio Rockhead is bringing it to life after Starlit Adventures and Starlit Archery both saw success on mobile devices and the Playstation 4.

In Starlit on Wheels, the series’ main characters – Bo, Kikki, Pikke and even the villain Nuru – face each other in fun races through insane tracks in the best tradition of kart games. All characters and vehicles are customizable, each with their own speed, acceleration, and handling so that the players themselves can find the best strategy to reach the finish line. The evil Nuru is trying to suck all of the stars into his purse, and it will be up to the heroes to defeat him. Without the stars, the Starlits will become sleepy and dispirited.  So it’s time to race to save the day!

“We are very happy to be finally able to share Starlit on Wheels with fans of the series and new players that enjoy a good race,” says Rodrigo “Chips” Scharnberg, Rockhead producer. “It’s the culmination of years of dedication and work, and it is very rewarding to see it close to being appreciated by players of all ages.”