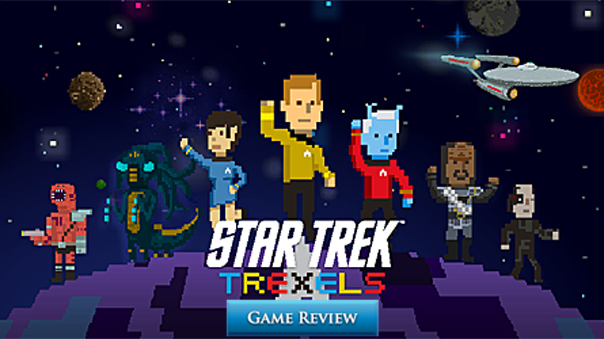 One of the things we got used to experiencing in the world of Star Trek is an already crafted ship piloted by a trained Earth Federation crew. So what happens if we’re thrust into a USS ship that’s being constructed while it’s going through its mission? Well, that’s practically the captain shoes you need to fill in with Star Trek Trexels. 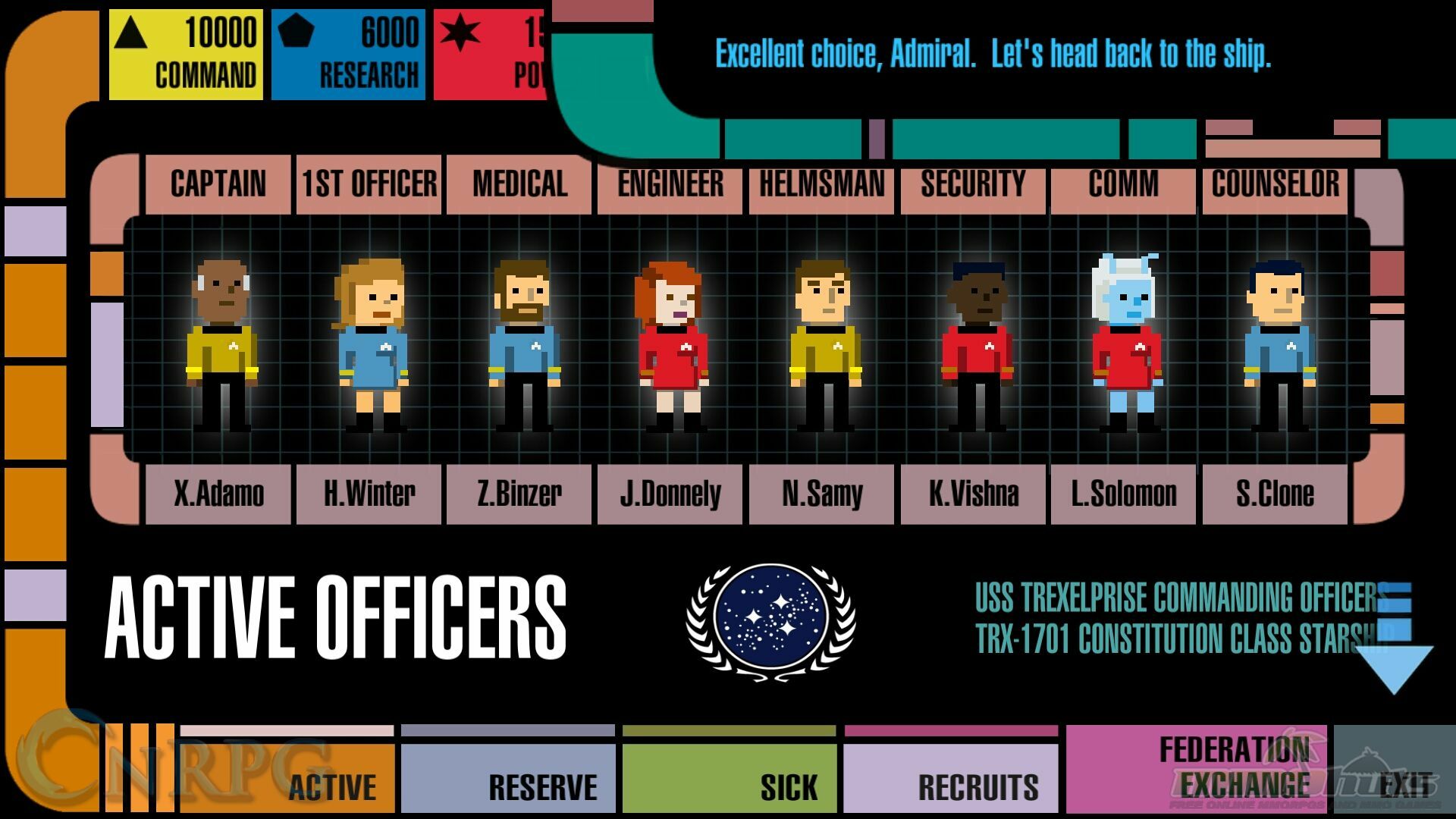 Building a great ship is only half the battle. You'll need a team to run things.

Star Trek Trexels is a free-to-play title for the iOS and Android platform that’s geared to celebrate the 50 years of the franchise. You are put into the shoes of a captain of a still being “developed” ship sent to explore the Trexelian Expanse to take up the leftover mission of the now destroyed USS Valiant.
Part strategy and part simulation game. Trexels allows us a look into how Star Trek ship building is if it’s done in a Tiny Tower way. With elements of ship building, coupled with planet exploration and actual away team action, Trexels put the whole Star Trek MMO experience in a fun, pixelized package.

The UI is straight forward but the gameplay variety is surprisingly vast.

Trexels is chock-full of gameplay features that I personally find surprising in a free-to-play title. One of the bigger aspects of the gameplay features is the ship management. The game lore is that you are given command of a ship that still needs to be worked on. This means that like Tiny Towers or any other game variations, Trexels requires you to build rooms that provide resources, man-power and the like. For Star Trek purists, this may seem a bit of an affront to the source material since the Federation would not send out a starship that’s as incomplete as your ship is at, but the gameplay options this choice gives to Trexels is a great one since this makes managing your ship more interesting instead of just traveling through space, the final frontier.

The other game feature that you’ll be spending time on is the skirmish mode where you will have to setup your own armada of Federation, Klingon and Romulan ships in PvP or AI controlled battles. This game mode uses an eCG type of gameplay where each ship gives you the option to equip the ship with officers and “cards” that get shuffled during battles. Skirmishes are turn-based encounters where you are given a limited time to decide on which cards from your deck should come out, and you can use them to battle against other players. The interesting feature they included to skirmishes in Trexels is that the cards that will come out during the battles are based on the remaining ships you have in the field. This means that you will be losing the cards you can use in battle if your opponents happen to shoot down the ship that contains said cards. This makes things a bit more interesting as you have to properly figure out how to distribute your cards for your armada optimally.

To complete the gameplay feature trifecta for Trexels you have exploring the Trexelian Expanse. You will be sending out probes to various planets in-game and, depending on what you discover per planet, you can either send an away team to explore the planet first-hand or send out officers to handle situations themselves. Sometimes these expeditions provide resources or even stat bonuses to the participating officer.

Other game features include the capacity to manually farm resources for your ship in the form of a shoot ‘em up style of gameplay. You would have your ship blast space debris that nets you power, research, dilithium and command points that you can then use in creating rooms within your space ship. The game also gives you the option of purchasing skins for your crew ranging from the Original Series, Voyager and the Next Generation to name a few. 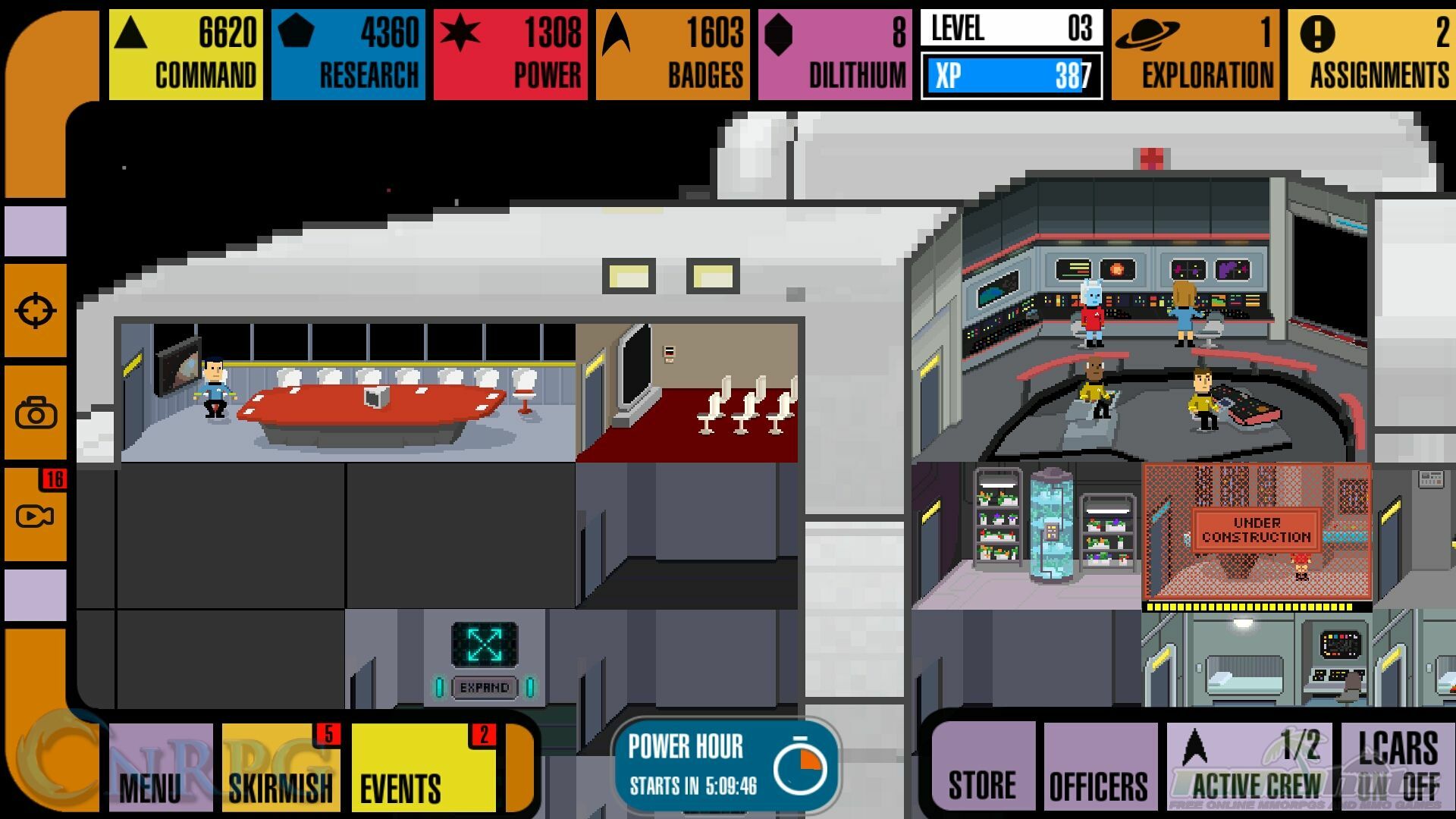 Building your ship is a huge investment. Rewarding, but a serious grind.

One of the things that really pops out in Trexels is the way things are really expensive in-game. While the game doesn’t really require you to spend money to play, there will be times that you will be tempted to spend a lot since the amount of resources you are getting for both the rooms you create and the farming missions are not enough to even create rooms for your ship.

Still, the high costs force you to properly manage your resources which plays out as a welcome challenge in the real of other mindless mobile sims. And this is coming from a guy who was forced to farm a lot of debris just to get my power resource back to 280 after making a crew quarter instead of a deuterium tank so I had to scrounge up power resources from bits and pieces of space debris. 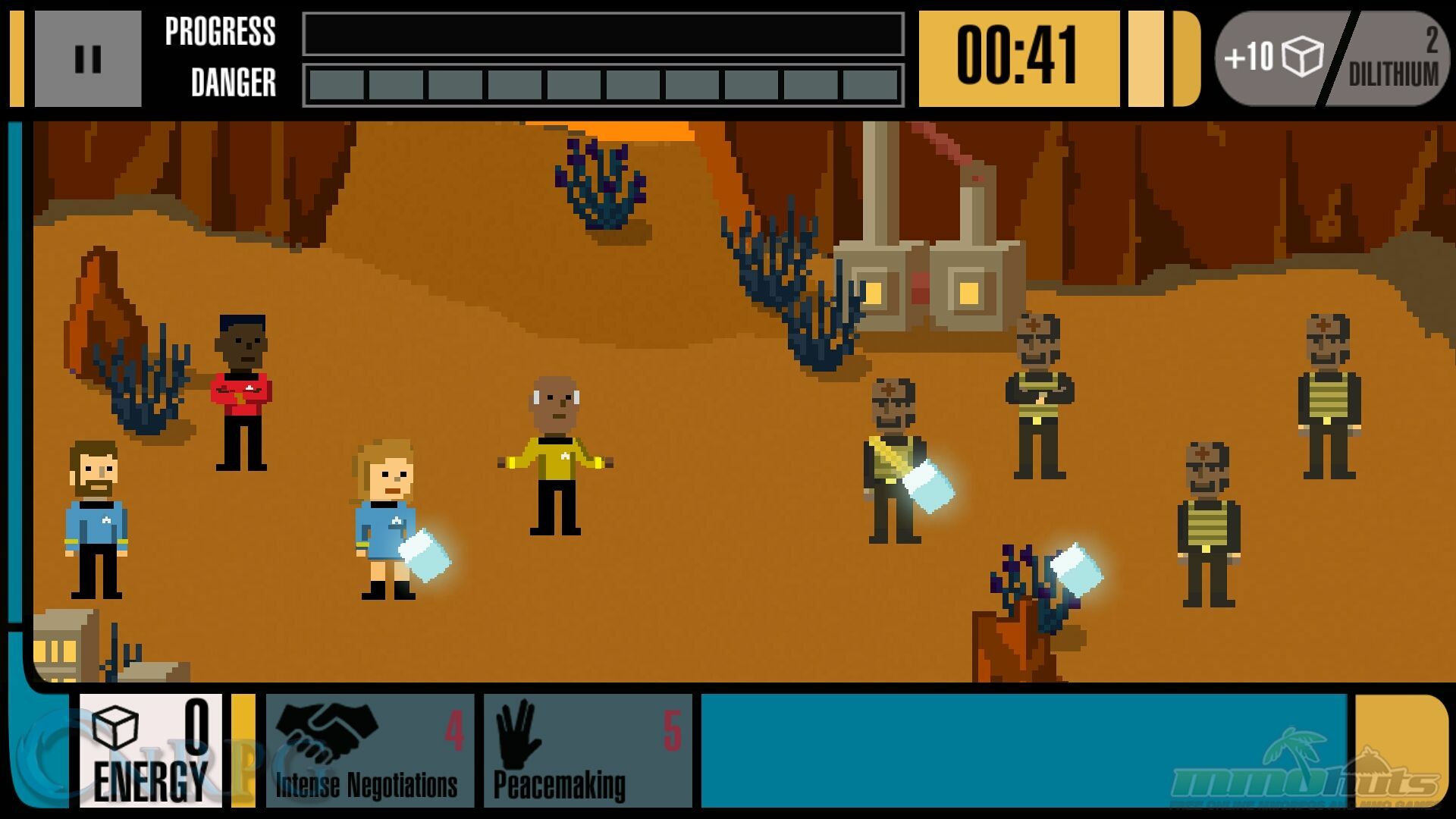 Trexels doesn't get boring as it feels like a best hits of some of the most popular mobile genres in one game.

With that said, however, what I really love about Star Trek Trexels is that the game feels like a complete experience even if it’s free-to-play and mobile. The game is surprisingly complex even with the visual limitations of being a pixel-designed title. It surprisingly provides the actual captain experience with the Tiny-Tower like ship building gameplay that is coupled with a highly competitive skirmish mode.

If you’re a fan of the Star Trek franchise and want to experience Star Trek on the go, this game is a must download. It’s neither one of those eCG games with just electronic cards that was made to look like famous ST characters, nor is it like those pay-to-win titles that disconnect you from the rich lore Star Trek has. The combination of various unrelated gameplay from various titles make Star Trek Trexels a respectful nod to the rich history Star Trek has established in its well-lived 50 years while making a challenging and enjoyable game that you can play online and offline.
The game is solid enough, that even if you’re not into the Star Trek universe, you can enjoy the game on the sole reason that there are a lot of things you can do in-game that the sources of the various gameplay features won’t have, and it’s a real treat to play.