Smite Pro League Week One: Ragachak’s Set of the Week 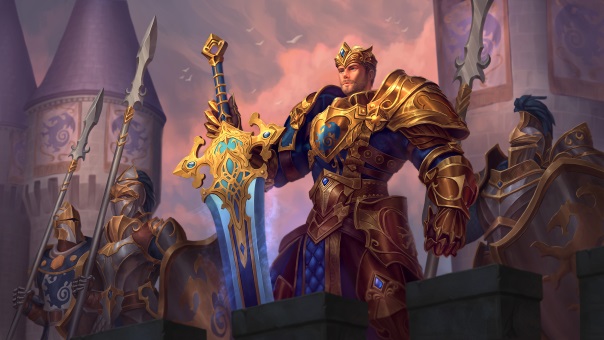 This column is still a work in progress. I’m figuring out how I want this to go, or what direction to take it in.

Hello, Internet! The first week of the Smite Pro League is in the books, and wow, did we start off with a bang or what? I’m going to do my best to cover these on a weekly basis, where I talk about my favorite set of the week or focus on one lane/matchup, in particular, to see how they go versus how I think it will go. On Day 1, we had the Pittsburgh Knights facing off with SK Gaming, and then Spacestation Gaming vs. Dignitas. I predicted a 3-0 Sweep for PK and a 3-2 for SSG vs. Dig. I was only correct once, though, as Dignitas demolished SSG the entire set, for a second 3-0 sweep. Why did I think PK would sweep though? SK Gaming is a sound squad, with a group of NA favorites, from Zapman to Belair. The Pittsburgh Knights, on the other hand, has been said to be a “Super Team”, with some of the best and brightest in SMITE.

I think a valuable lesson was learned this week: PICK OR BAN KING ARTHUR. Even though my match I focus on is PK vs. SK, I want to highlight my favorite moment of the week, before we go any further. Variety’s 1v4 as King Arthur deserves notice. Variety is a madman and really went into situations he had no business getting out of. He had the skill, and a little bit of luck, and made SSG look pretty damn foolish. Perhaps Variety just has a bolder playstyle, because this definitely did not work when SSG tried it. SSG ran out of mana when trying to pin down Variety’s King Arthur, and he got away up two kills, and didn’t get killed in response.

The Pittsburgh Knights are a new team and have a lot to prove. Some of my favorite players from around the world came together to form this team, and while I was worried they’d have a hard time jelling, that was not the case. NRG Esports’ Emilzy (Support), Adapting (Jungler) and Rowe (Coach) came together with Deathwalker (Solo) and Vote (Hunter) from Rival. Couple that with Zyrhoes (Mid) from Dignitas?  This team literally has it all. That’s not to say that SK Gaming is anything to sneeze at. Their squad of Belair (Solo), sam4soccer2 (Jungler), Paul (Mid), Zapman (Hunter) and NeiruMah (Support)? Neiru and Zapman are among two of my favorite players in the SPL. It’s one thing to play against a squad that’s already established that have strategies you are familiar with. But dealing with a brand new squad of all-stars? That has to be daunting. That’s why I wanted to focus on this match instead of SSG vs. Dig. There were some cool things going on in SSG vs. DIG, and also again in SSG vs. PK. I appreciate the wild picks in game one for SSG vs. Dig and I genuinely thought one side banning all Guardians, and one side banning all Mages was fascinating. SSG went with support Ne Zha instead of a Guardian, so DIG banned four Guardians to really cut down on potential guardian choices. Ultimately, SSG did not grab a single Guardian that game, opting instead for Ne Zha, Ao Kuang, and Thor.

Ultimately, while the Pittsburgh Knights did win a three-zero sweep, it did not go their way the whole time. In fact, SK Gaming had a lead in both of the first two matches, but wound up throwing things away, the longer the games went on. Once Adapting came online and turned a fight or two, everything fell apart for SK Gaming. I don’t know if they were tilting, salty, or just confused, but things began to go to pieces for the established team. I think one of the biggest mistakes was probably the early Fire Giant in game two, for SK Gaming. They had such a big edge there and did nothing with it. That was a running trend it seemed, wasting Fire Giant. PK, however, picked it up late that game and beat down SK Gaming. The Double Da Ji strat was working at the start of these matches, but PK would either catch on or have options to get out of those sticky situations. Game One saw PK take The Morrigan and use her extremely well. Games Two and Three featured this Double Da Ji strat from SK, where they would try to catch as many people with the Pao Lao. Zyrhoes had so many options for great transformations but only used Da Ji. That aside, it was still a great week for the SPL, and it’s really started off with a bang! 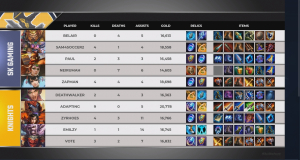 What a wild start! Around 30 seconds both teams are boxing, but Sun Wukong does not escape! Adapting gets first blood with his pounce! SK chases, but just wind up losing two more gods for their greed. SK wind up with a 1 for 2. SK is not shy about being aggressive, but it wasn’t such a great start. Pittsburgh is basically a “super team”, but can that overcome the reliable squad of SK? I’m not so sure. I love Terra, but dealing with Wukong looks very frustrating since Wukong has damage for practically nothing. Vote tried to snatch up Zapman, but he managed to get away. Pittsburgh Knights at 7 minutes are up 4-1. Next thing we know, Adapting is divine, has a quadra kill, and Pittsburgh Knights take game 1 handily! I, unfortunately, missed a chunk of this match, because IRL got in the way. As these were my immediate thoughts, I didn’t want to tamper with them with thoughts that showed up later.

Match One goes to the Pittsburgh Knights! 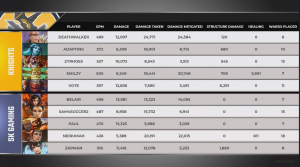 What an absolutely bonkers squad from PK! Both teams have incredible comps, but I’m glad to see some Arachne in the PSL. Arachne immediately begins bullying Artio. Neiruma almost died 100-0, but managed to back off. Zapman’s low too; there’s a lot of boxing going on in the jungle. Zap and Sam tried to push back, and while PK backed off, no first blood just yet. I spoke too soon, Emilzy dropped at 1:35~. SK has yet another strong start, but will they lose control again? It took two Da Ji ults to stop Deathwalker on King Arthur! Around 7:20, the fight started, but since King Arthur had no escapes, all they had to do was land one chain. Both Da Ji’s got one each, and that’s all it took. SK gaming is still up, 4-1 at 8 minutes.

SK Gaming is making big plays! 13 minute both Pyromancer and Fire Giant! Arthur tried to go in, but got nothing for it. However, PK makes it a 1-for-1, making the score 5-2. It was very early, and perhaps SK should have just left instead of trying to engage. The Morrigan doesn’t have FG buff, but the rest of her team definitely still does. It’s a matter of if SK can capitalize on Arthur’s lack of beads, and use that FG buff, they can keep this lead and perhaps the win. Shoutout to Emilzy though for the insane pull! His Sylvanus is fantastic. I dunno if taking a Tier 1 instead of a potential Tier 2 was the play though. SK Gaming has already picked up Pyromancer again though, at 18 minutes. SK tries to siege at 18 minutes, but instead lose Sam, and PK begin to counter-siege to push SK off. I don’t think the Double Da Ji ult will work the whole game. It’s scary, but at some point, I think PK’s going to either learn from it or perish.

19 minutes, the next Fire Giant battle begins, but is reset. Belair drops Deathwalker, while Vote is sneaking around with a split-push. Vote pushes a Tier 1, and almost a Tier 2, but does escape. The downside to SK’s strat is that it’s very clear what they’re going to do. If PK can just pick up some CC immunity (Magi’s), they can get out of sticky situations. This has felt like a much closer game for me. At 23 minutes, PK absolutely decimate SK at Fire Giant, and SK fail to steal Fire Giant. It’s 4 for 0 and PK made SK look super free, and got Fire Giant to boot. YET ANOTOHER EMILZY PULL LANDS PERFECTLY. Just like that, Pittsburgh Knights make it 2-0. 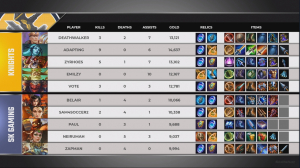 SK Gaming really believes in this Double Da Ji comp. It’s time for a Salty Runback! Will they work on their aggression and position better? They started strong, but things really fell apart on them. PK must feel like “If it ain’t broke, don’t fix it”. I’m not really sure why SK gaming is really just standing so hard by this strat. They believe in it, which I appreciate, but it hasn’t worked yet. Is this just a feeling out process to see what PK can do in the long-term? Or are they just tilted, and stressed out about these matches? Pittsburgh Knights have an incredible team like I said last game. SK Gaming has a reliable squad too, but I’m not sure how I feel about another Double Da Ji.

Adapting scores the First Blood at a minute! Just barely with the spiders! Artio was with their team, but without a heal, it wasn’t enough. However, King Arthur almost got killed by The Morrigan. He got out, but it wasn’t without a great cost (health pots). Pittsburgh is doing a great job of invading, applying pressure and stealing buffs in the early game. Gold is still pretty even at this point, but they’re missing out on buffs. Unlike last game, SK is not working together quite as well. PK is showing more dominance and is the first time they’ve had an edge at the start. They aren’t worried about SK Gaming, now that they know what the strat is likely going to be. Vote grabs a double at 7:40~ and Pittsburg continues their contested dominance in Game 3. Sometimes you have to respect an opponent before you disrespect them a lot. That’s what’s going down here.

13 minutes, SK get Fire Giant, but they lose two gods for it (one was already dead, making it 3). Belair dying makes it four, and it’s 14-3. SK got Fire Giant, but only Neirumah has it. All this does is prevent PK from getting it. This salty runback has not gone well for SK. They should have tried a different strat. I know PK is a new group of players, but they’re all All-Stars.

Whew. 22 minutes, and it’s done. We’re 1-1 so far here! That was absolutely ugly. SK had nothing that entire game. They lost at the Picks & Bans phase. Sure, SK is amazing, but they really have to not tilt and try the same thing when it doesn’t work. They need more strategies. There was no comeback, there was no counterplay. They tried the exact same thing again, PK met them with the same strat, and bodied them this time. It’s one thing to have a strategy you believe in, but it’s another entirely to continue doing it even when it has long-since stopped working.