SMITE The Morrigan Goddess in Review 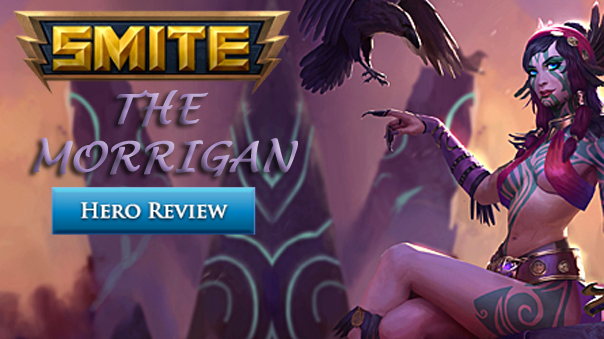 With the introduction of SMITE Season 4, we were told we would receive a new pantheon, the Celtic Pantheon! And while I recently wrote an editorial outlining a few of my ideas on what it could possibly hold, one of the best out of the possible bunch has to be The Morrigan. A mage, because of course, she’s three Goddesses in one. That’s why she is referred to as “The” Morrigan, and you’d do well to respect the nomenclature. But who is The Morrigan? She’s the Mistress of Fate; Anu, Macha, Badb, the three of them represent The Morrigan. Every event, war, skirmish, and every dying breath… she was there. She wears many masks, so frequently so that I cannot imagine any knowing her true intentions, or true face. But the glory of it is that she can appear anywhere, anytime, as anyone. Yes, anyone. She’s the most ambitious of the Smite Gods so far, and I have to say, my favorite mage in the game right now. Whatever you build, whatever you can do, she can do it too. Not for too long, but long enough to make you regret taking serious firepower into a battle. Her rating is “Very Difficult” and hot damn do I ever agree. The build for her isn’t exactly rocket science, but the real question is “Where does she belong in my team comp?” Instead of looking where to put her, my opinion is you should build around her. With her power to copy enemies and players, you would have to count on the enemies doing something useful. I’d rather consider which ultimate abilities would be horrific to use on your team twice.  Are there some better than others? Of course.

The Morrigan is incredibly tricky to use though. She’s got a full kit that does amazing things though. You can stealth/clone. You have a long range poke, a short-range huge damage poke/stun, and YOU CAN BECOME ANYONE IN THE MATCH WITH ALMOST NO ACTIVATION TIME! But you can’t just… pick her and do it. I mean, you can, but it’ll suck, your team will hate you, you’ll probably get reported, and go 0/10/0.   Maybe that’s an exaggeration, but she takes a lot of practice and much trial and error. She’s got bundles of damage, and can fit in most any team with a bit of thought and effort, but there are definitely compositions she fits better than others.  And while I do focus/specialize in Arena, she’s way better in Conquest, I can’t lie about it. One of the major benefits about The Morrigan is that you can sneak over to the enemy side of the field, clear some wards, and appear on their end as one of their team. They’ll still be able to attack you/recognize you as an enemy, but with careful planning and some surprise, that split second of hesitation will be the end of them.

You know what’s really popular right now? Mages in the Hunter Role. It happened a lot at Smite Worlds this year, and it really makes me think: How would The Morrigan fair in a role that is not a solo one.  And honestly? I think she’s most powerful when she can roam, IE: Solo lane/middle lane, but I’d like to see her in the duo lane. Not as a support [because you know by now, I main support], but as the Hunter! Yes, pair her with someone powerful like Ymir, Sobek, Sylvanus – something to pin them in place while she obliterates them with powerful, dark magic. Her long range poke, the ability to dip out of lane and stealth, and suddenly be the enemy carry, basically she brings huge utility to team tactics in Conquest. But it’s a lot harder than it looks to be able to see the threads of Fate. She offers doom in copious amounts, but only to someone who knows how to properly wield her.

When I play Gods like The Morrigan, I definitely go all in, balls-deep damage. I might buy one protective item a little later, but I do things a little different on her.  Normally, you’ll want to get Boots of the Magi [and I think I do in my footage], but more important are Boots of Focus. That’s right. CDR is King on the Queen of Fate. Pairing that with Chronos’ Pendant is a no brainer. It’s so damn useful on all mages, but especially her. Sure you can go with Mail of Renewal, Spirit Robe, a Shield, or something like that, but more than that, I like to be greedy and angry. For that, I need Pythagorems’ Piece. It’s a fantastic lifesteal item, which is again, something she is in dire need of to recover from the almost sure damage you’ll take getting into range for Deadly Aspects. From there, I want Rod of Tahuti, Spear of Desolation, and then something fun. Maybe Doom Orb if my clones are running circles around my frustrated foes. Maybe Banecroft. She’d be hilariously fun with some Magic Penetration too, for her powerful 1. Of course, you always want to build for the situation, but I feel like a fair amount of her build will be static, easy to remember, and suitable for most situations. Lots of magical power, penetration, stuff to make people rue the day they took against her in the lane. Just remember when you pop your ultimate, it’s their stats you’ll be utilizing not yours. But your level still matters, so the most important part is getting kills and not feeding so you stay a step ahead of your foes and unleash the most when stealing their kit.

The Morrigan is amazingly fun. She’s not easy, but she’s definitely rewarding. I have a feeling her damage might take a nerf, at least her “1”, or the Percentage Damage on her passive, but you have to work with her. Simply playing her won’t guarantee you wins, and building around her is better than just locking her in at the end of the pick phase and hoping for the best. There can always be a useful God to turn into, but I think one of my favorite things to do are back-to-back Xbalanque ultimates. Or back-to-back Ares. Oh, did they all pop beads and think they’re getting away? Odin pounces down and cages them, another ult, and then, oh no! AOE damage! I can see her doing hilarious things as a utility ultimate, by pairing her with Ah Puch or someone of that nature. That could be why you put her in the hunter role. Pair her with someone like Guan Yu or someone else that can keep her alive, just sustain, farm, and then suddenly she keeps the enemy pinned in an ult. Free money for the whole team! It’s all about teamwork; it makes the dreamwork. The best thing about her is that she can bring anything to the team. She can make up for a missed ult, she can steal the best part of the other team’s ult, she has bundles of damage, and is quite mobile. But the downside is definitely how predictable it is. You might be able to guess who she’ll be, and if you waste the opportunity with Changeling, you have a long wait ahead of you before you’ll get a second shot at it.