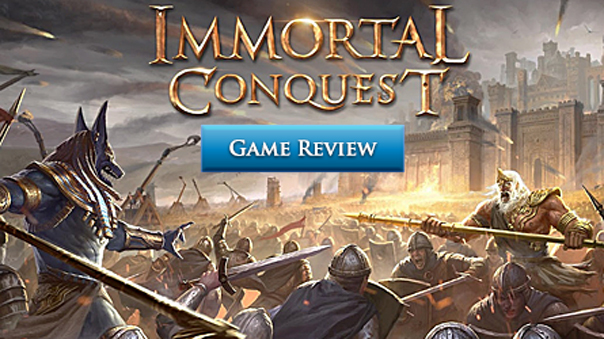 Strategy games on mobile are definitely not a new concept. There are different styles of them, but one of the most popular are region-style where you acquire blocks of land and expand your territory with the ultimate goal being ruling the world. Immortal Conquest is that style game. You start a city in one of the zones/regions on the map [some of them are already packed…], from Asgard, to Upper/Lower Egypt. You summon Gairos, which are basically mythological heroes that will lead your armies to fight for you. You know, after you spend time waiting to draft, spend time waiting to construct buildings, spend money to summon better heroes… Immortal Conquest from the Chinese company “Netease” is bringing their vision to the west with the attempt to tap that market. But does it really have anything that makes it special? Or is it just another gated, money farming mess? Things start just how you imagine they would in these type of games.

While I don’t think it really brings anything new to the genre, I’m also of the opinion that you don’t have to reinvent the wheel everytime a new game comes out. If the method works, why try to change it every single damn time? Like I said, your goal is to conquer the world. You build real life alliances, and expand across two million squares a land. Now that is a lot of land. And sure, I know what you’re thinking: The people who spend money are going to trash me every single time and I’m never going to get anywhere! That’s the common complaint about mobile games; that Whales make the game hard to play. Whales are a slang term for the 1 or 2 percent of players who spend tons of cash to win mobile games and get an edge over most everyone. But those are the people who really keep the game running! While I don’t like it, if I had that kind of money? Eh, I’d probably do it too. What I’m getting at is there is so much space in this game that you aren’t likely to run into that issue too badly when you’re starting out. I’ve come close to another player already, but they don’t appear too powerful. 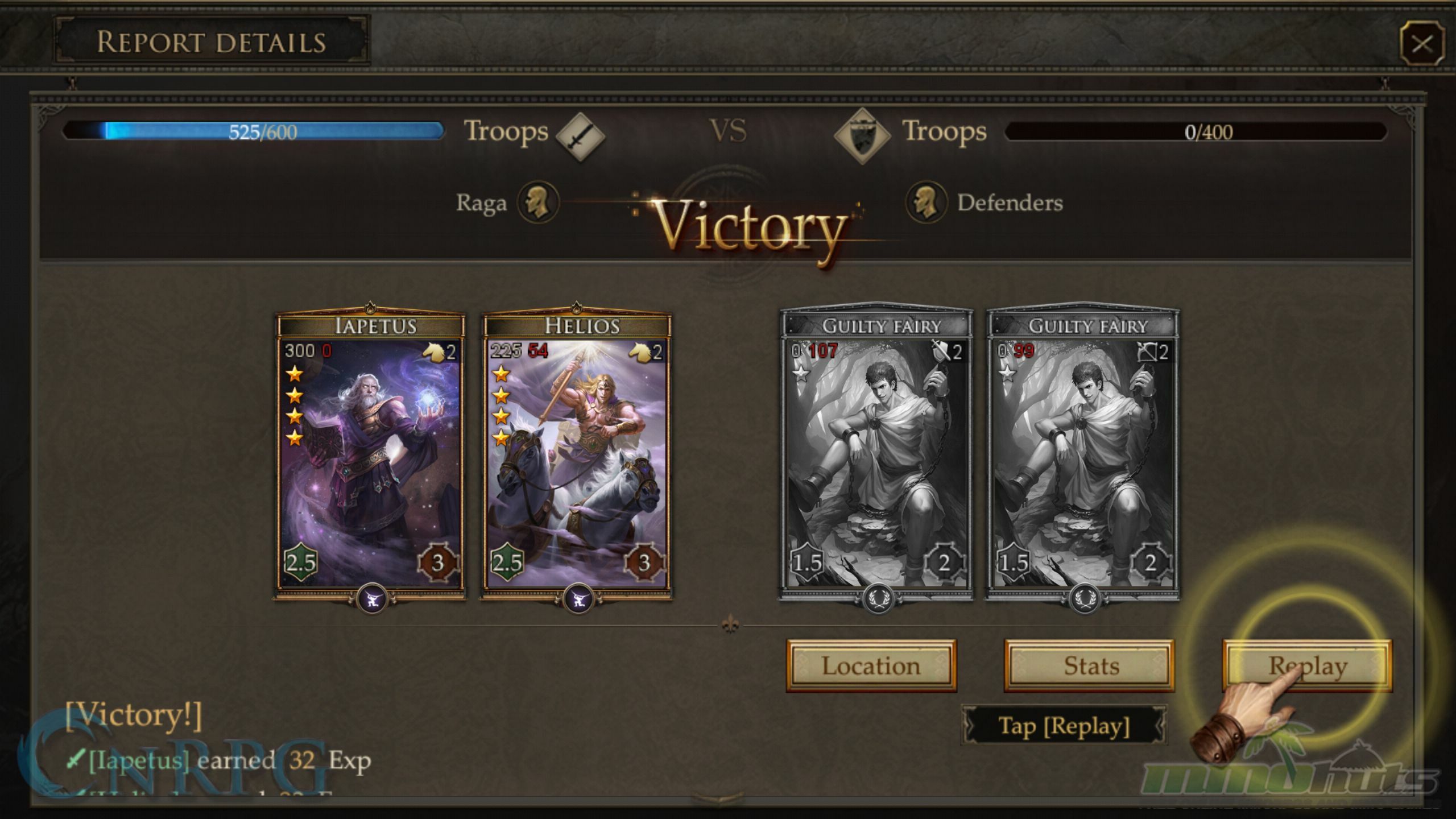 Combat is automatic and can be skipped, though there are tactical decisions you can make prior to engaging.

But it’s time to get into the actual nuts and bolts of this game. First of all, what the hell are Gairos? My research across the Internet led me to zero answers. Is it a fancy word that I’m not privy to? Regardless, your generals, leaders, and champions are summoned in the form of cards, Gairos. It’s not too different from the majority of strategy games. You have a rear general, a mid general, and a frontline, but you can’t get that one without some upgrades. The Gairos have rarity, and of course, the better ones will cost gems, which will cost money. And sure, I imagine there are quests that will give you gems as a reward, but not quite enough. You’ll have to save, or spend cash to get the really really amazing ones… and that assumes luck of the draw is on your side. The variety of characters is pretty vast though, I will say that. Some of the summons only take coins, which is good! But the characters you get are subpar, which is less good! For example, the High Order Gairos takes gold for the first one, but the rest take gems. There are lots of summons that aren’t available just yet. But I’m willing to bet those will take gems. 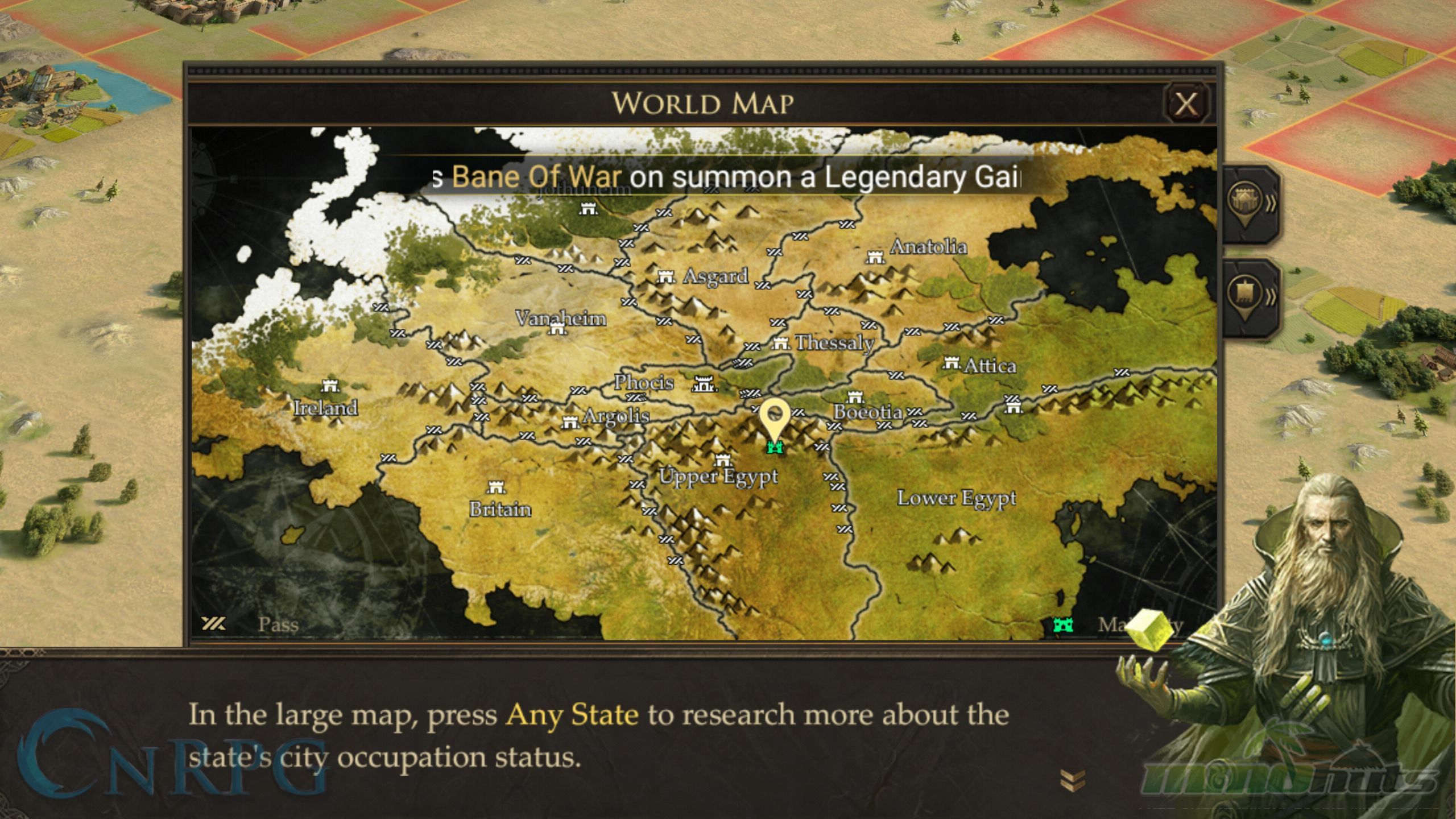 The tutorial will get you a decent way into starting your empire before the real time sink sets in.

The good news? It has a pretty long series of tutorial quests, stuff you’d do for your city anyway, and the rewards are pretty damn great. Tons of resources, money, and even some gems I believe. Down side: The first few of them complete instantly, to get you in to the game. The rest of the tutorial quests [which you can see via the Quests button] do not, and the wait times are ridiculous for some of them, if you don’t spend gems. Some of the upgrades for your town take 20 minutes or longer, and frankly? I play mobile games because I want my gaming fix right now, on the road. Not “click a button, wait an hour”. That’s not what I’m in it for, so that’s probably not for me to understand. But the tutorial “does” help! It shows you how to expand and upgrade your city, and the city/territory tiles, and so much more. But it will take time, so I hope you’re in it for the long haul. But you’ll probably know by the time it’s over, if you are interested in going on. The rewards are worth it though, I can definitely say that. 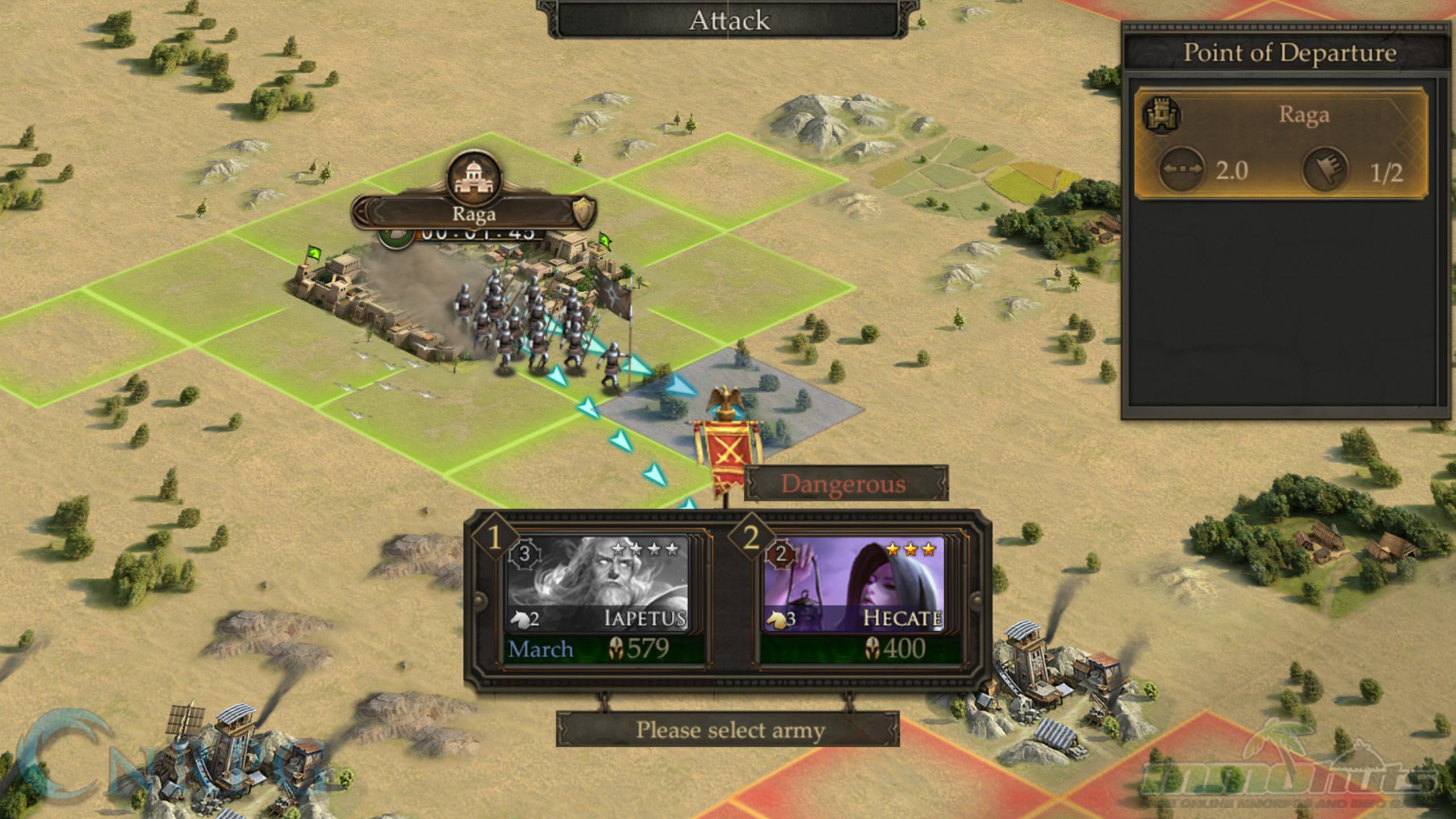 Difficult squares are random and can really grind your gears and block your empire.

The game impresses upon you the need to have an 8×8 grid or so – a nice clean box for you to expand/upgrade into, but the problem with that is, the tiles aren’t always easy around you. My city’s upgrade is very erratic. The spacing is weird because there are so many “difficult” spaces where you are probably going to die if you fight for them. I don’t know how they set that up, or if it was random, but my region looks very stupid! It doesn’t appear that you have any control in combat either. Your Gairo have abilities, and they seem to use them pretty early in combat. You can watch the battles though, or skip them, and replay them later if you’d like. So that’s a positive. There’s also another battle system, that exists outside of the main game. It’s “Drill” and it’s in the menu when you expand it out. The way it works is you click on the fight you wish to tackle and, using Gairo that you’ve collected, do battle with specific enemies that give you rewards for completing them. It costs a minor amount of gold to try them, but it doesn’t take away from your actual army, which is definitely another benefit. You can gain Skill Exp [used to power up skills], food, coins, etc. This is also where you’ll probably learn that you have various types of units! Your Gairo have an icon in the top right of the card, such as a horse. You have Cavalry, Infantry, etc. Calvary is strong vs. Infantry, and so on in the typical rock paper scissors style.

Now, I enjoy this game, despite the issue that all mobile strat games have: Gating. And we’re going to talk about it briefly, then move on. Gating happens, and I understand that mobile games have to make money, but Immortal Conquests is pretty rough. Strategy games have probably the worst gating of any mobile title, and the deeper you go, the worse it’s likely to get. I have a feeling you’re going to have to spend money in the later parts of the game just to keep competitive. But if you’re just playing for fun, to idly build a city and grow in your down time? It won’t be so bad. 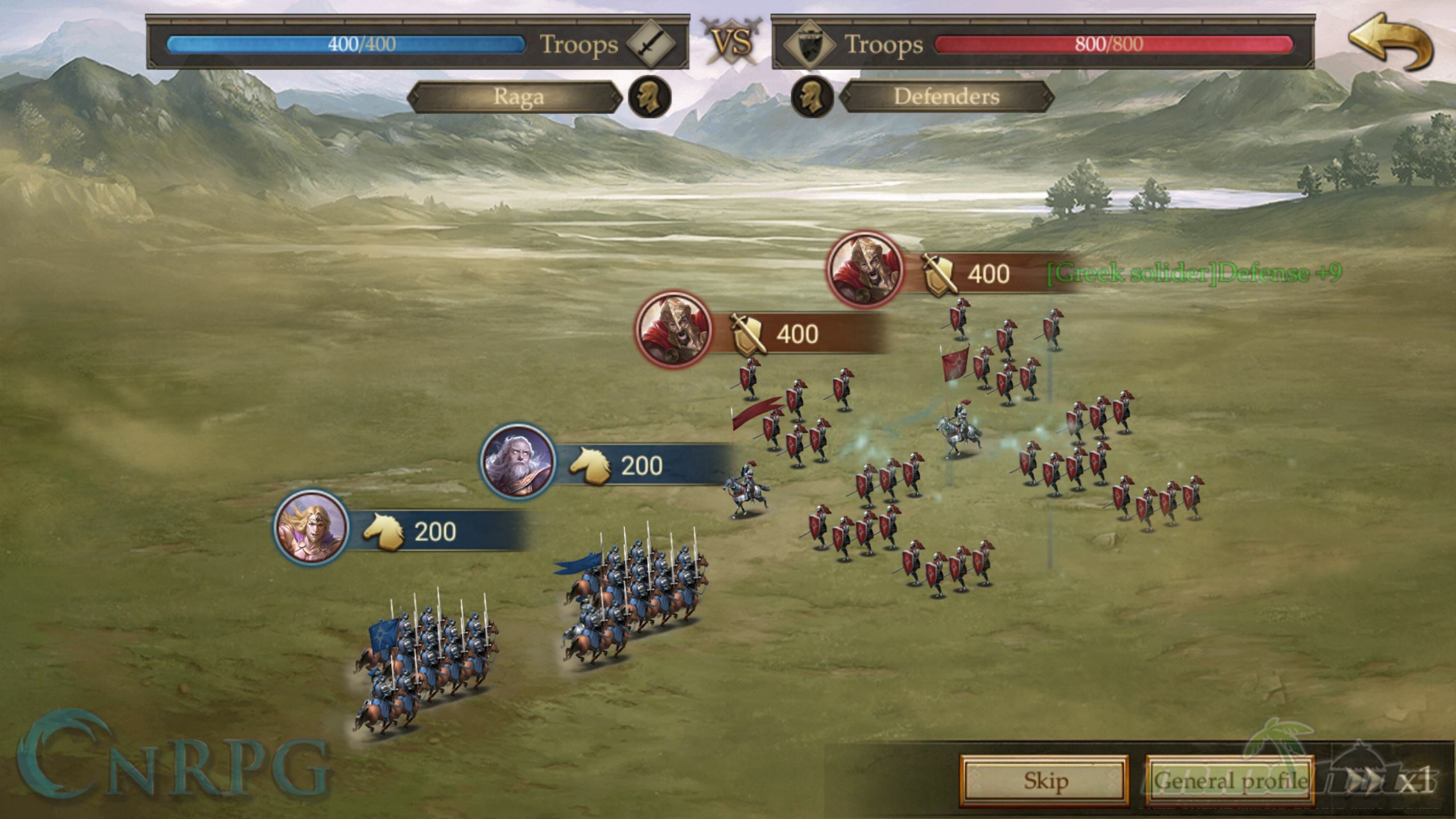 Combat is beautifully animated for a mobile title.

Visually speaking, it’s terrific. It’s a very pretty game. The sound is fantastic too, but you won’t hear much of it since you’ll be turning your phone off to wait for the thirty minute or longer upgrades. At least they start off pretty quick… The game is fun, and while it does have drawbacks, the fans of this kind of game are used to this, and aren’t going to be surprised. There’s a Epic Achievement system for big rewards, you can upgrade the rarity/skills of characters, level them, and it’s a surprisingly deep game for a region/land-based strategy game. If you’re looking for a new one and enjoy this style of game, you’ll find it incredibly easy to get into.