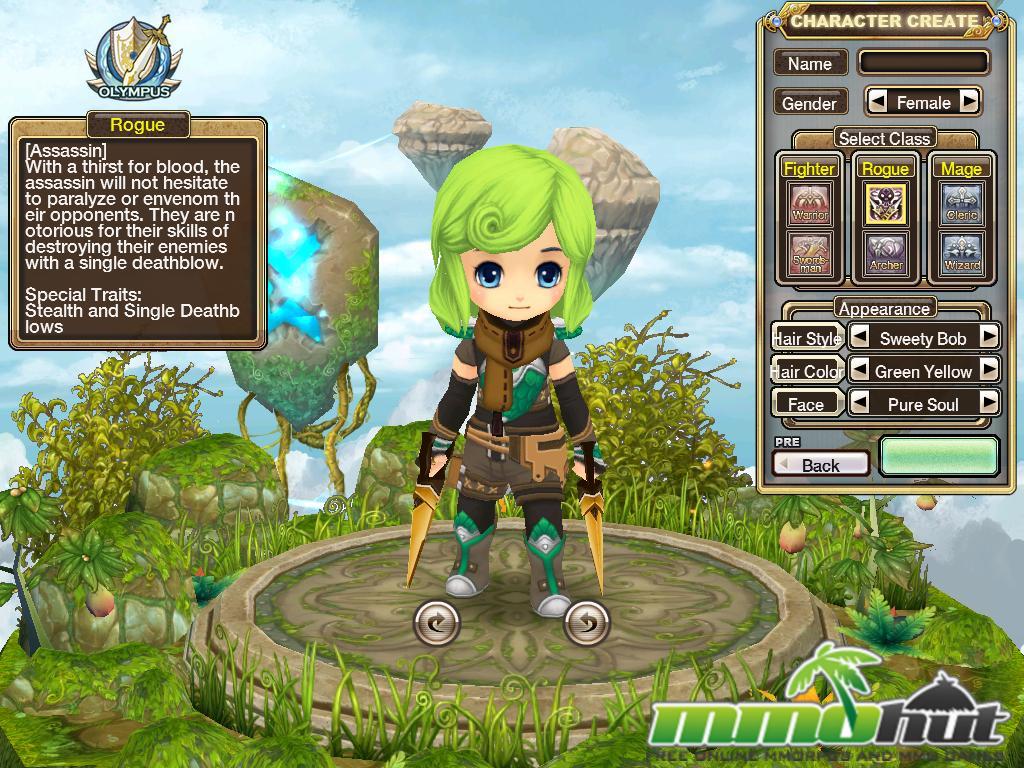 GamesCampus is best known for its sports-themed MMOs, but has recently branched out into other genres. While Legend of Edda isn’t the first fantasy themed MMORPG they’ve published, it’s their best one yet. Much of the gamepaly mechanics, character progression, and environments are standard MMORPG stock, but the anime-inspired, chibi art style helps Legend of Edda Online. The chibi characters manage to make the game feel distinct without drowning it in cuteness.

Light or Dark, Day or Night

Legend of Edda has a relatively small client size, but that’s mainly because the modest graphics; the visuals are attractive, but this game won’t be pushing your computer to its limits. The chibi character models are similar to those in Luna Online, but the overall visuals look as though they were inspired by Ragnarok Online. Before character creation, players must choose which faction to align themselves with. Edda has a backstory loosely based on Greek mythology, where the gods of Olympus are at war with the Titans. Based on the selection menu, Olympus is represented by a blonde woman that looks like an angel, while the Titans are represented by an evil, red-haired fellow. Choose wisely, as all characters created on a particular account will be associated with the same faction. Members of each faction start in Gaiyan Town, but in two separate instances of it. In the Olympus version it is day time, while the Titan version is in perpetual night. The regions outside town for each side are identical, but are two copies of each. This means new players won’t be able to interact with members of the rival faction. If you’re planning to play with friends, make sure you all choose the same faction. 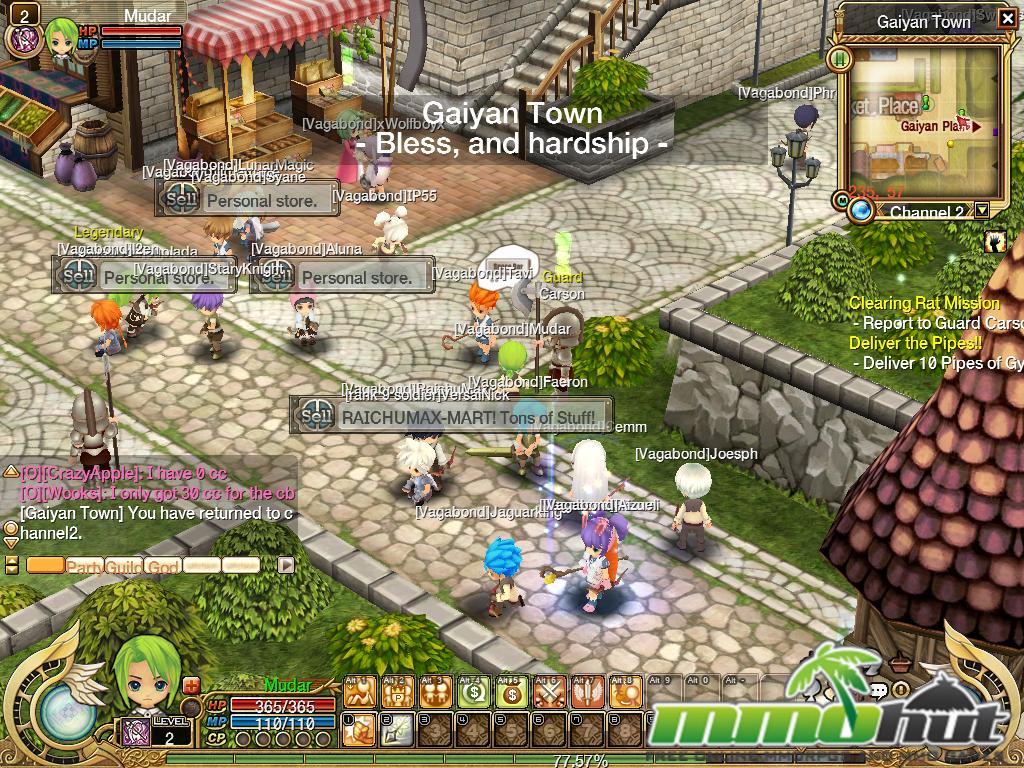 Each server provides players with four character slots. There are a total of six starting classes available, broken into three categories. Warriors and Swordsmen are fighters, Assassins and Archers are rogues, and Clerics and Wizards are mages. Each class has its own strengths which are highlighted in the character creation window. There are several style and color options for hair available to each gender. There’s also an appearance option labeled ‘face’, but it actually controls the appearance of the character’s eyes. All the character models look like young children, which is what chibi is all about. This may annoy some gamers, since it makes Legend of Edda look less serious. My advice to these gamers is to wait until they play for a few minutes. After entering the game and using the mouse wheel to zoom out, the characters look just fine. The rest of the world, including buildings, roads, vegetation, and NPCs are well-rendered and look more realistic.

After a brief, cinematic introduction, players are transported to Gaiyan Town, where they’ll be able to grab a few quests and start progressing. The interface in Legend of Edda is functional, but appears a bit dated. Movement can be done with either the mouse (point and click) or W,A,S,D. While both work well, point-and-click just feels more natural given the isometric camera view. Players can zoom in and out using the mouse wheel, and for all practical purposes players will want to keep the view as zoomed out as possible. Zooming in to take a look at your character is fun, but makes the game much more difficult to play. My largest complaint with Legend of Edda is the inability to pan the camera left or right. This means players are locked into the default camera view. Almost every 3D MMORPG allows a free panning camera, so the absence of one here is felt. At times your character will end up in awkward positions, but it shouldn’t hinder gameplay too much. Another interface oddity is the ability to interact with NPCs by hitting the spacebar when standing near one. It’s still possible to talk to NPCs by double clicking on them, but a quick tap on the spacebar makes the process a bit more fluid. Hitting the spacebar when not near an NPC will cause your character to jump. There’s no benefit to jumping when it comes to navigating the world, but its nice that the option is there. On a final note about the interface, the background music is catchy and well composed.

The very first quest in Legend of Edda that asks players to leave town and fight involves killing rats. This cliche quest serves as a good indicator for what players can expect from Legend of Edda going forward. It is very much a traditional fantasy MMORPG. The experience rate is moderate, and players earn a single skill point per level. Stats increase automatically, though equipment that raises stats can be acquired in a number of ways. Players will have to head back to town and find their NPC trainer to learn new skills, which come in two forms: active or passive. Each class has its own set of skills. At first, players can simply learn every skill they meet the level requirement for, but they’ll eventually have to ration their points and pick the ones they prefer. Progression in Legend of Edda is very linear. Even the world map is organized in a way where one zone leads to another. There’s no alternative paths to take. Luckily there are instanced dungeons for groups to tackle, and a PvP system to keep competitive players interested. 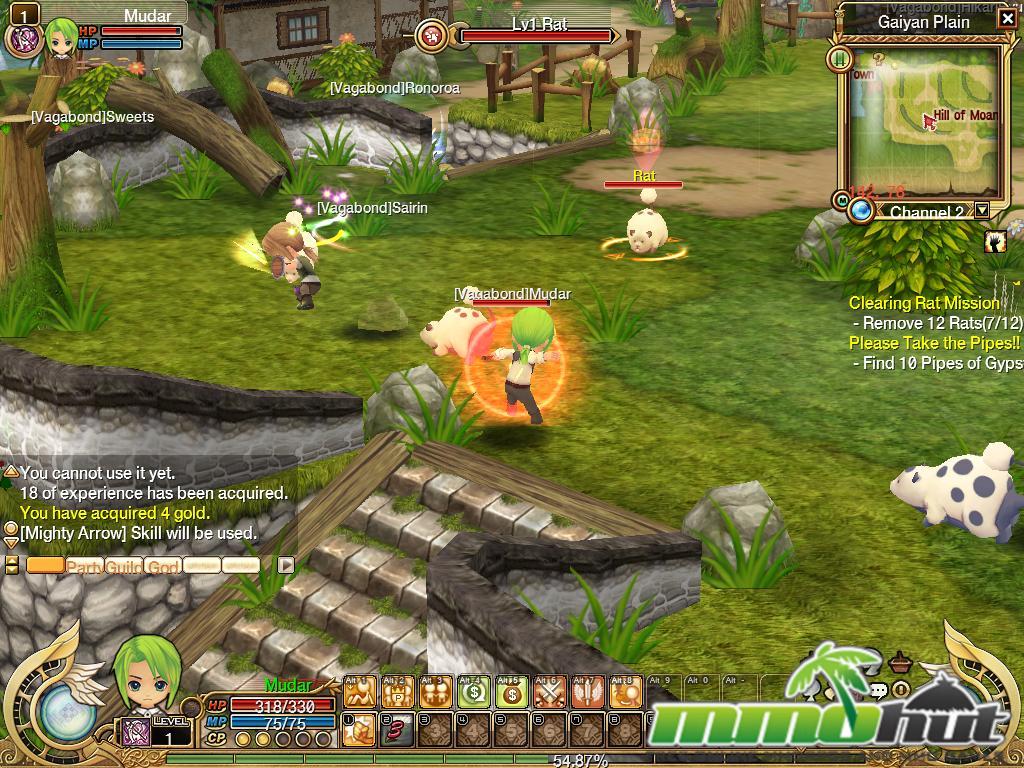 Besides consensual duels, Legend of Edda allows player killing in the higher level zones. There’s also guild and group battles, but the most interesting PvP feature is the Sacred Treasure Battle. These are large-scale fights between players aligned with the Olympians and the Titans that take place on special maps. The winning side receives a number of rewards, including points towards unlocking Demi-God skills. Each class has its own set of demi-god skills, such as the Assassin’s stealth strike. Organized PvE isn’t neglected either. The various dungeons can be run on multiple difficulty settings, making them more challenging to veteran players. As players progress, they’ll be able to upgrade to more advanced versions of their starting class. Besides unlocking new skills, job advancements change the appearance of avatars. There’s also a simple crafting and pet system included in Legend of Edda that allows players to upgrade their gear, but with in increasing risk of breaking it. Oddly, the game feels the need to announce to the whole world every time a player successfully upgrades their sword to +7. Players can get their first mount at level 20, but they can get a combat pet much earlier, starting at level 10.

Legend of Edda is a traditional MMORPG with very linear progression. It’s got a nice variety of classes, and manages to incorporate some newer MMO features like instanced dungeons. Despite the chibi graphics, Legend of Edda has a strong PvP element that allows for open PKing on certain maps. It doesn’t reinvent the genre, but offers a solid MMORPG experience.