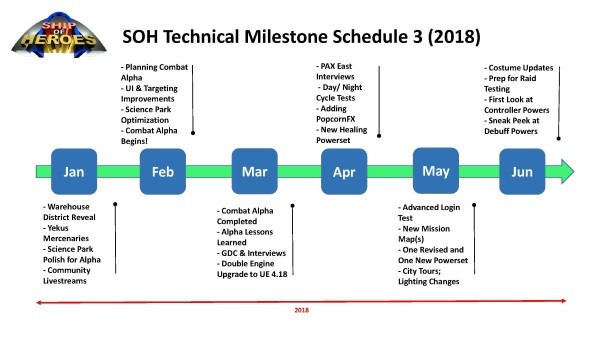 Ship of Heroes has officially posted their third technical schedule, showing milestones planned for the first half of 2018. This will cover six months of testing, which included a successful Combat Alpha, and the next “big thing”, the login/network test. This schedule also hints that the third quarter of 2018 will include a raid test of some kind. New enemies, powers, costumes, and a host of alpha activities are planned for the first half of the year, and new, cutting-edge tools like popcornFX, the day/night cycle, and changes to lighting in outdoor environments are highlighted in this plan. The devs at Ship of Heroes like to involve small groups of their community at many stages of development, and then openly share the feedback and results.  In 2017 they completed the first Alpha on their character creator, and in February they started their successful combat Alpha.  Next up is a network test, which is an essential element for any MMO.  In Q3 the dev team wants to enable players to test some kind of raid situation.

Ship of Heroes has been in development for two years and expects to begin Beta Testing at the end of 2018.