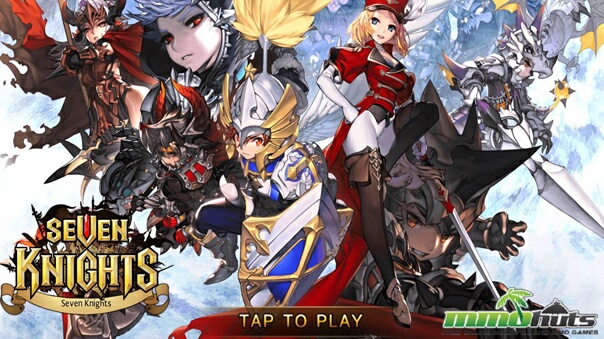 When it comes to storytelling, mobile games would often rank the lowest. I mean, any “normal” game dev company doesn’t waste much time on story when their playerbase’s playtime is limited. Addicting gameplay that drives users to spend money is the order of the day. Of course there have been some outliers out there like, Chain Chronicle, that really brought the whole Suikoden experience into the mobile market.

However, it seems that Netmarble’s latest title, Seven Knights, also took the road less traveled and has made a story-centric title that can be at par with any half-decent RPG out there. Though it seems their emphasis might have taken valuable resources away from polishing other areas of the game. 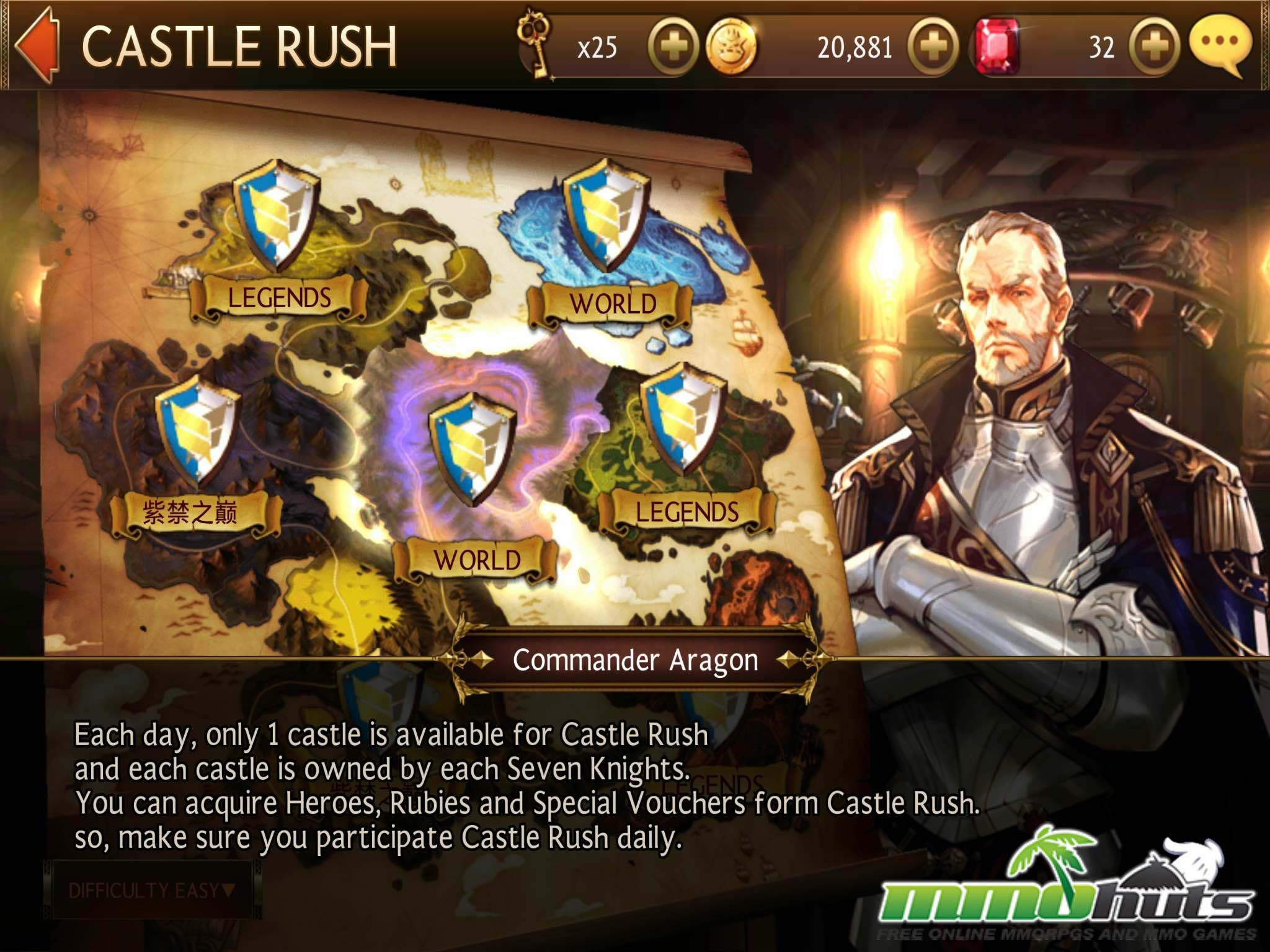 Seven Knights is set in a world straight out of Greek mythology where the gods, or at least in this case, a god, the god of destruction, has decided to separate himself to twelve pieces. Seven of which has fallen to the city of Asgard, not to be confused with the actual Norse mythology city.

This bestowment set itself a terrible precedent and pushed Asgard to the brink of war. And then we have another god, the goddess Ellena, bestowing her power to a hero, who is now tasked to prevent this war from ever happening at all. And this introduces you to the main character, a rather high rarity hero named Evan.

You are then lead through the game’s tutorial part of the game. And under normal circumstances, you’d kind of breeze through, if not skip it. Netmarble set the tutorial up as a continuing story telling vehicle. And this is the first time I am really glad I didn’t skip the tutorial, as you’d feel quite lost in the story without it.

The closest I can reference for what they did in the tutorial is the first stage you jump into in Megaman X. The latter part of the tutorial, which will lead up to your actual game beginning is highly reminiscent of the battle between X and Vile prior to Zero coming in. 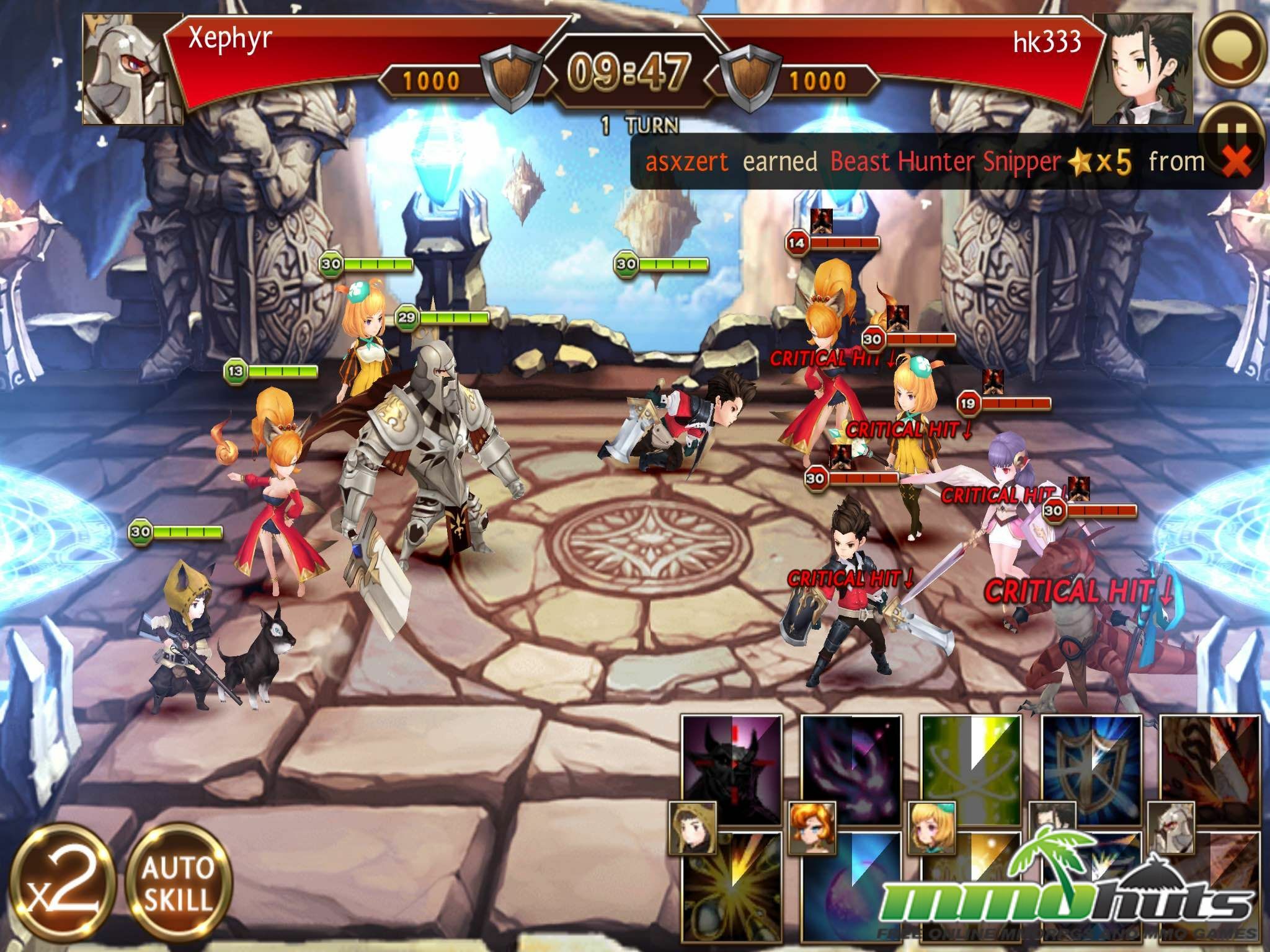 The visuals dazzle but there isn't a lot you can do during action scenes.

And, to add more to the surprise, the game starts off as a flashback before the events happening in the prologue. I am lying if I didn’t say I was pleasantly surprised.

So moving on to Seven Knights’ gameplay. The game at its core is just a unit hoarding/evolution centric title akin to the Summoners War school of mobile gaming. The main story progression comes through the default quests the game hands to you as you continue finishing story quests one by one. You can accomplish dailies, weeklies and monthlies to speed progress should you hit the brick wall of what your units are capable of defeating.

Since the game is unit centric, the rarities you’ll get for Seven Knights start from one and reach up to six stars. You can even go higher as you evolve, transcend, or fuse the heroes in your roster. The game’s unit level cap is set to 30, with an excess of pluses reaching up to +5 after the unit reaches max level.

You earn experience points, along ide gold as you accomplish each quest. However, the option to level your units outside of battle is also available by expending the units you buy/get through quests, daily rewards, or the store. Another option to “improve’ your characters’ base stats and levels is to fuse them with elemental stones that you can earn from the daily dungeons. 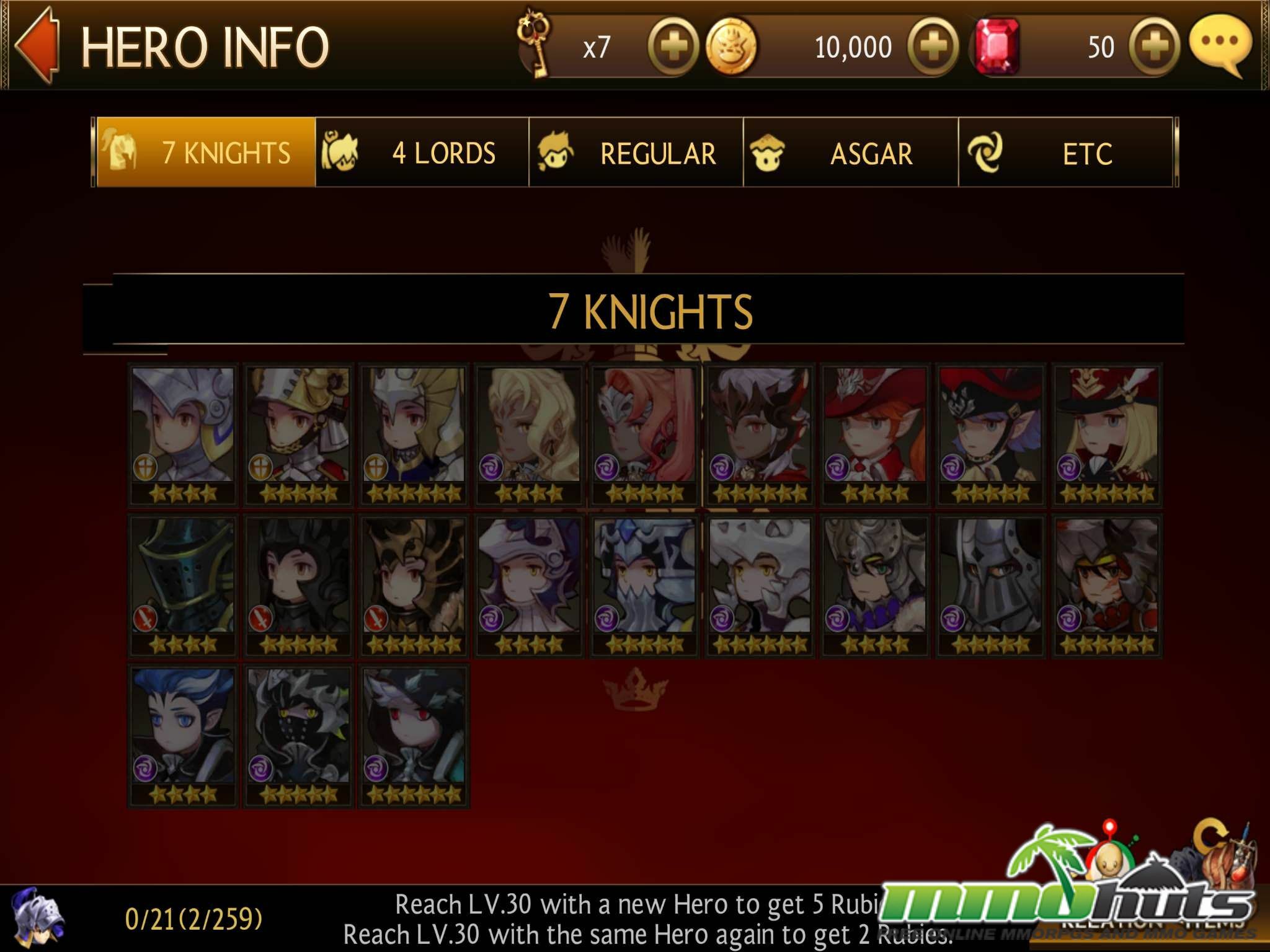 The beautiful character renders come at the cost of a smaller launch roster.

Seven Knights currently has seven unit classes you can find, each differentiated by a specialty, except the all-arounders. Units have two available active abilities that can be improved. You can also improve their overall stats by equipping them with armors and weapons. Reaching account level ten would also allow you to purchase passive buffs and stat improvements for each character you have on your roster.

On the design side of the units, it’s clear that Netmarble wanted to go a step beyond what is already present in the genre in terms of looks and feel. The characters are well designed, and I really liked that they invested in voice acting for character attacks. I also liked that even the non-human characters get audio clips whenever you acquire them.

Battles in Seven Knights are often fast paced-and frantic. Skills are flashy and really enjoyable to watch as you unleash a barrage of skills to the enemy mobs before you. However you have no control on targeting and attacks are automatic. Choosing when to unleash active skills is your only semblance of control. 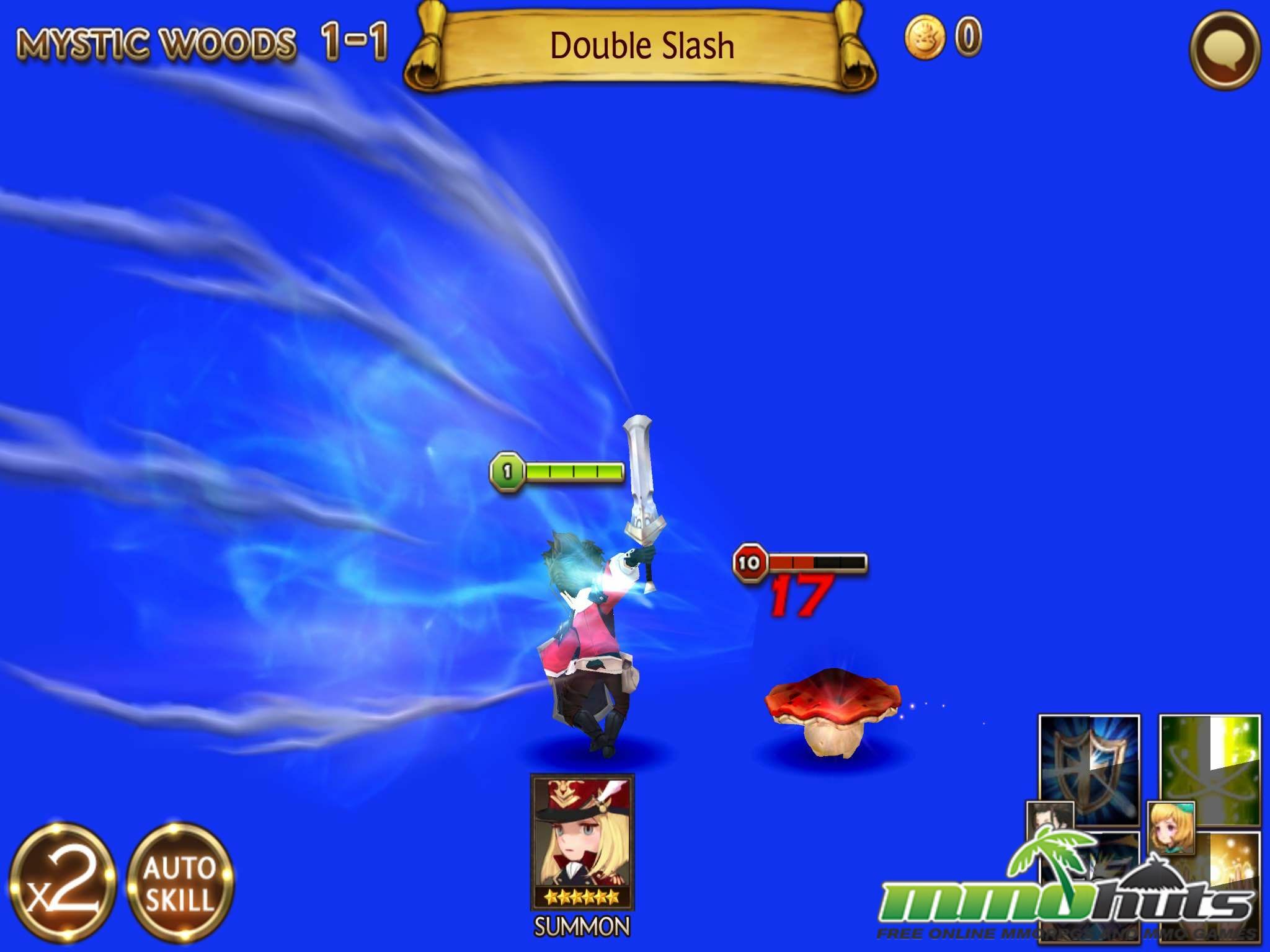 You can at least choose when to unleash your active special attacks.

Seven Knights offers a bit of battling options aside from the instanced quests. If you have the hankering for PvPing you have the game’s ranked PvP matches. As for PvE you can head to the daily dungeons or Celestial Tower for decent to good rewards.

One thing of note in Seven Knights is that it’s emphasis is on team formation. The game rewards your team an offense and defense percentage bonus depending on your chosen formation. You can also improve the bonuses earned by leveling up these formations through gold.

Overall, my experience with Seven Knights is fun and interesting. I especially liked how Netmarble decided to go with the flashback style of storytelling in relation to how the game is presented. I loved all the fluff Netmarble did with the story and the emphasis of creating an immersive game experience. In fact, they also provided a cheat sheet that is accessible in the options button of the UI as to who is who and who they are connected/affiliated with. 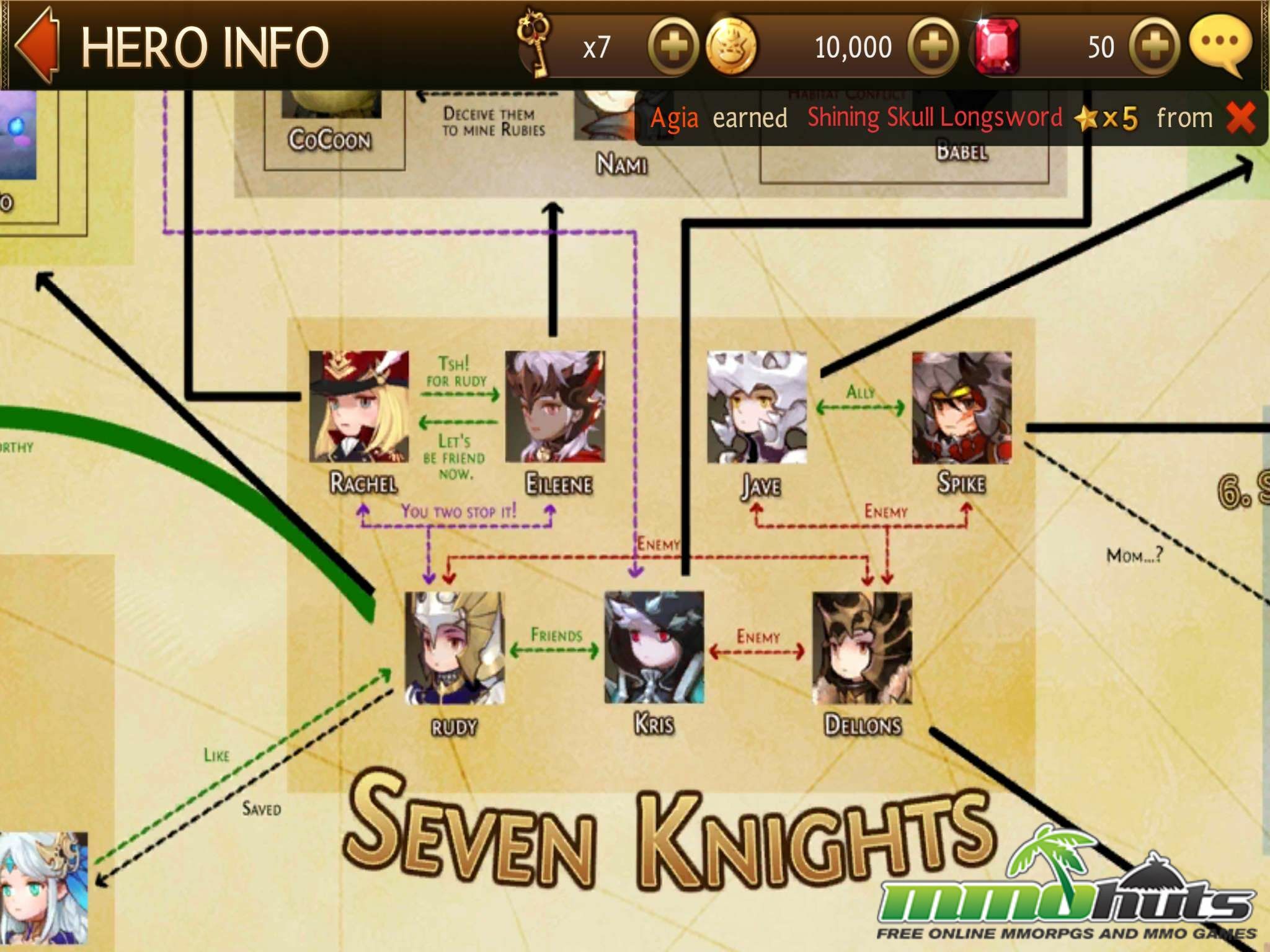 If you're feeling lost in the story, the character relations sheet can help.

But what I didn’t like is how the story started to unfold as you progress through the game. There were tons of missteps and the writing really needed work as I would often find myself lost. The conversations were poorly written, often leaving me confused about character’s motivations and personalities. And for a game that boasts such a “great storytelling experience” you can’t really have your players confused.

And looking past the game’s fluff material is a game system that can be a bit tedious and grindy. Similar to Summoners War, remove all the fluff and you really just get to grind a lot. But unlike, Summoners War, Seven Knights has a smaller unit pool to choose from.

With that said, this doesn’t mean Seven Knights is a terrible game. In fact, it’s still a good alternative go to game compared to the massive sea of crap now filtering into this genre of mobile games. There’s still some interesting sounding game features set to be released in the near future, which should keep players hooked going forward. If you want a mobile game that takes itself seriously, looks gorgeous, and emphasizes its story elements, you won’t go wrong with Seven Knights.