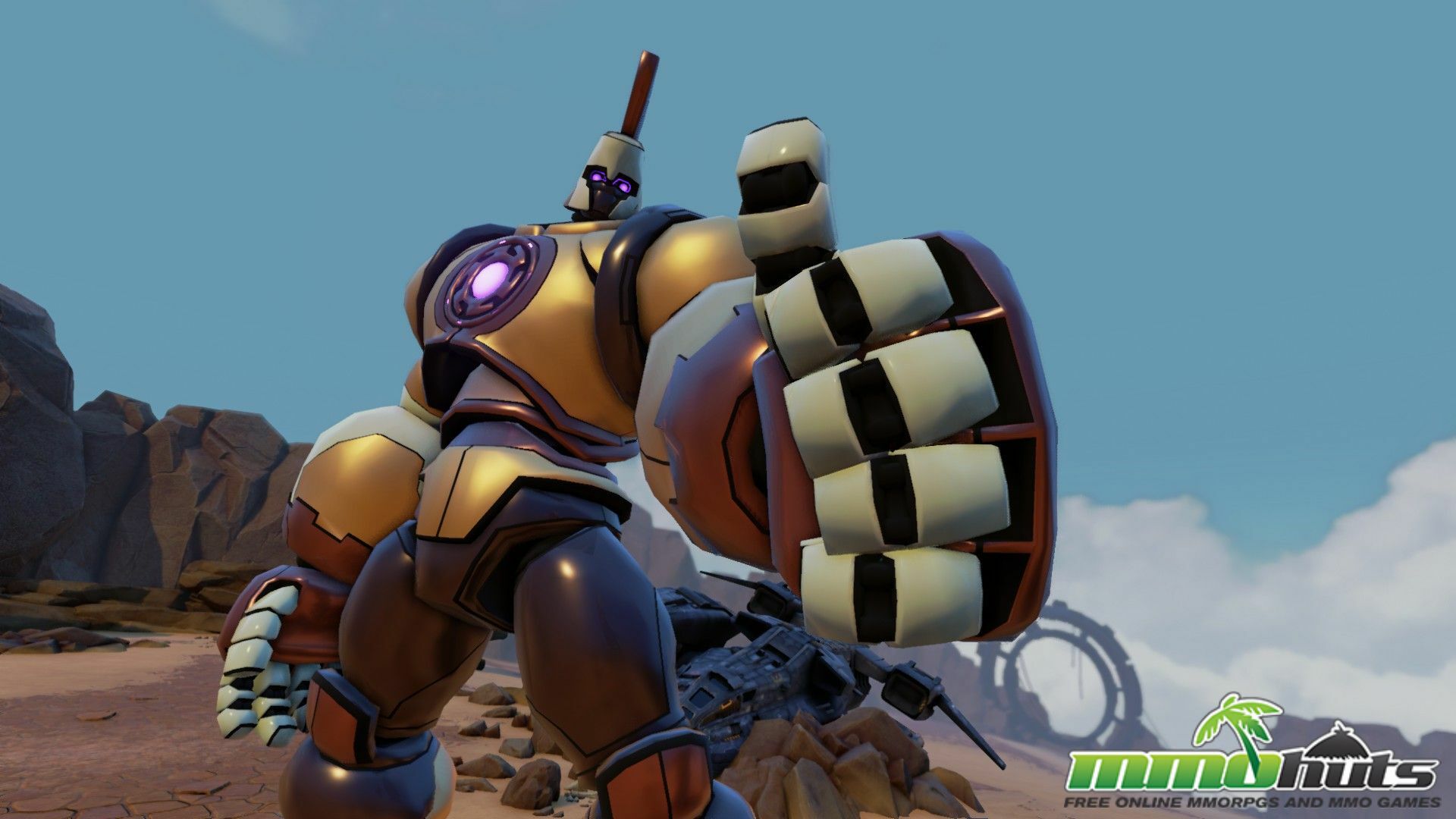 Picking up the game for the first time will feel familiar to anyone who’s even briefly played street fighter 4. The pacing to a match, the speed of attacks and the movement of the character is all very similar to Capcom’s powerhouse of the genre.

This pacing similarity doesn’t extend to the controls, however. Instead of the six button array of light, medium and heavy attacks split between punches and kicks, you have an array of eight buttons. Only three of these actually relates to a character’s normal attacks, which are simply categorised as light, medium, and heavy normal attacks, with no differentiation between when a character punches or kicks. This makes the remaining buttons unusual for fighting games, as special attacks aren’t done by pressing a series of directions then a normal button but instead are assigned to three other buttons. This reduces the time between picking up the game and entering a match dramatically, as you only need to spend a short while in training messing about with combos before being fully versed in a character’s tools, and happy to take things online. Even throws and supers are bound to their own buttons, which can be a blessing and a curse. Supers are much easier to thread into a combo, as they have harder inputs than a normal special in most fighting games. Throws on the other hand I find a bit harder to deal with, as the button needed to use and tech them has to be a bit out of the way rather than simply hitting two buttons my fingers would normally be over anyway. 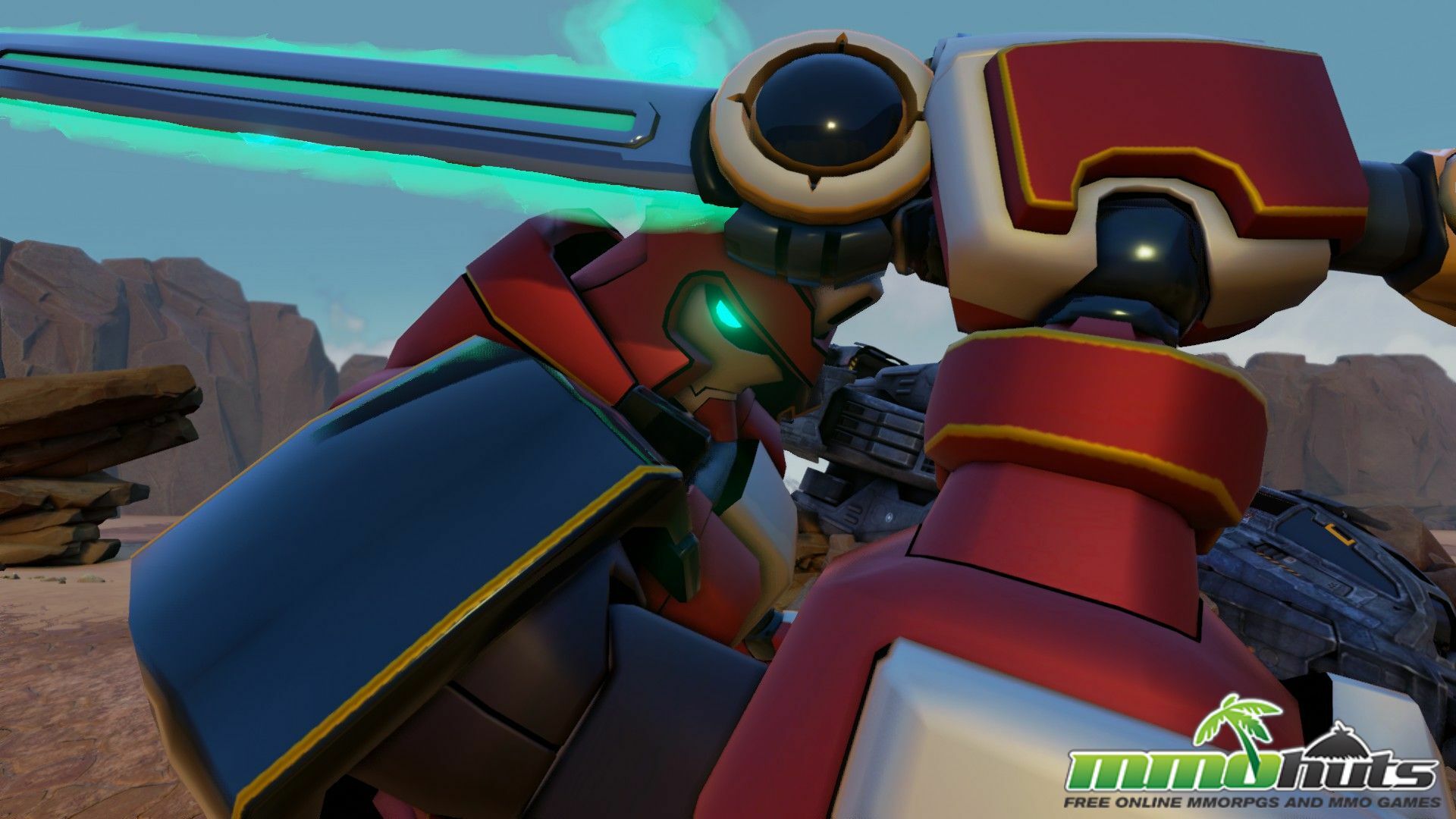 Every character is a robot, for the record.

Even the game’s combos are far easier than other fighting games. There’s very few links, and they’re not necessary as most practical combos are done with target combos, special cancels and juggles. Even then, the windows for cancelling into a special from a normal is pretty huge, and most of the juggle combos are built so you can just mash the button you want until the move comes out. There are numerous exceptions to this rule, and we’ll likely see some more complicated stuff as the game ages, but for now it’s pretty easy to pick up, even if you didn’t know the basics before giving the game a go.

This leaves the game to focus on the neutral game, moving back and forth while fishing for combos using normals, or keeping the enemy under control using projectiles. The game’s neutral is a grounded affair, much like street fighter. The air is a dangerous place to be, since your jump trajectory and timings are predictable (Unless you’re playing one member of the cast, Vlad). No hops, no super jumps, air dashes or other shenanigans here.

This is the game’s biggest strength, and its biggest draw. Since all execution in the game has been deliberately simplified, no one is going to screw up a combo; any losses caused by something getting dropped are going to be exceptionally rare. Wiggling back and forth, measuring your opponent’s attacks and reading their habits will win you every match of Rising Thunder. It’s a great way for people to just pick the game up and immediately get to experience what fighting games really are about at their core – controlling the right amount of space at the right time. 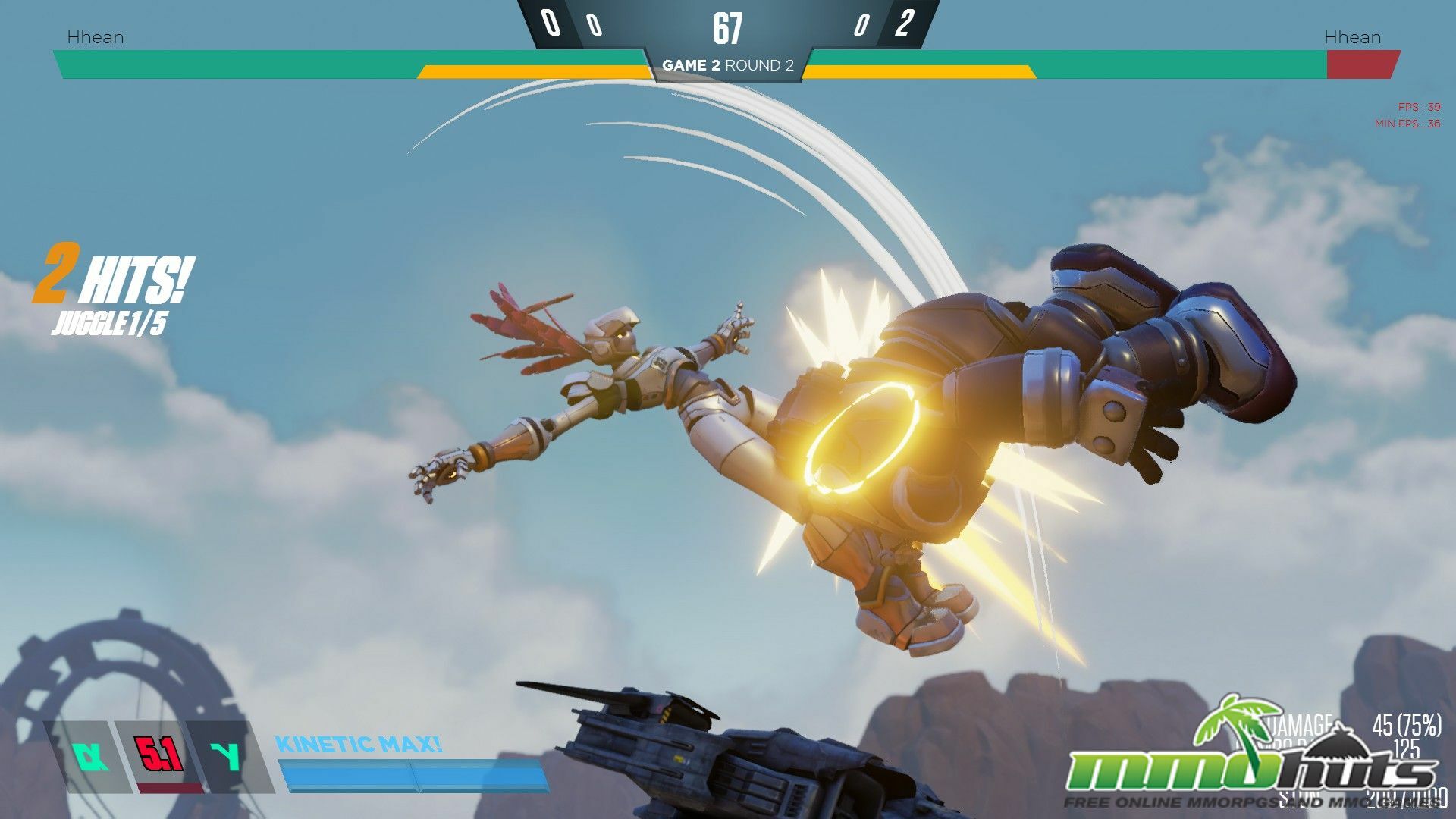 Reversals on most of the cast are pretty bad, so pressure can be hard to shake off once your opponent is on top of you. This makes the neutral game even more important, as getting a single opening can lead to the match swinging hard in one player’s favour for a while as they go for a variety of mixups and throws. That said, the huge advantage of all the game’s reversals is that due to no longer requiring an input they are incredibly reliable, and come out quicker than in other games due to the decreased time it takes to execute the move itself. Doing a predictable action (like a jump in) will result in it being punished with absolute consistency by a good player who’s looking out for such tricks.

The way a character glows to show they are invincible or armoured is a nice touch that allows you to know when you’re losing and how. In most fighting games, you simply need to know that a particular move gives you invincibility either through trial and error, or looking up a guide online. Well, or it looks like a shoryuken. This works really well both ways. If your opponent falls for the trap of hitting you while you’re not able to be damaged, they know why they lost. However, it also lets them know the exact moment they can smash your face in if the attack whiffs. Even if I were tepid on the rest of Rising Thunder (which I’m really not), I would want this visual indicator included in more fighting games.

The most technical thing the game has is its Kinetic systems. Before a match begins you are given the option of picking between two ways of spending the Kinetic bar that fills during the course of a match. Kinetic Deflect is the same as the Burst found in many anime fighters, allowing you to slam any two special buttons at the same time to blow an opponent off you, even mid combo. This would be a great defensive tool if the combos in the game’s combos were a bit longer and hit that much harder. 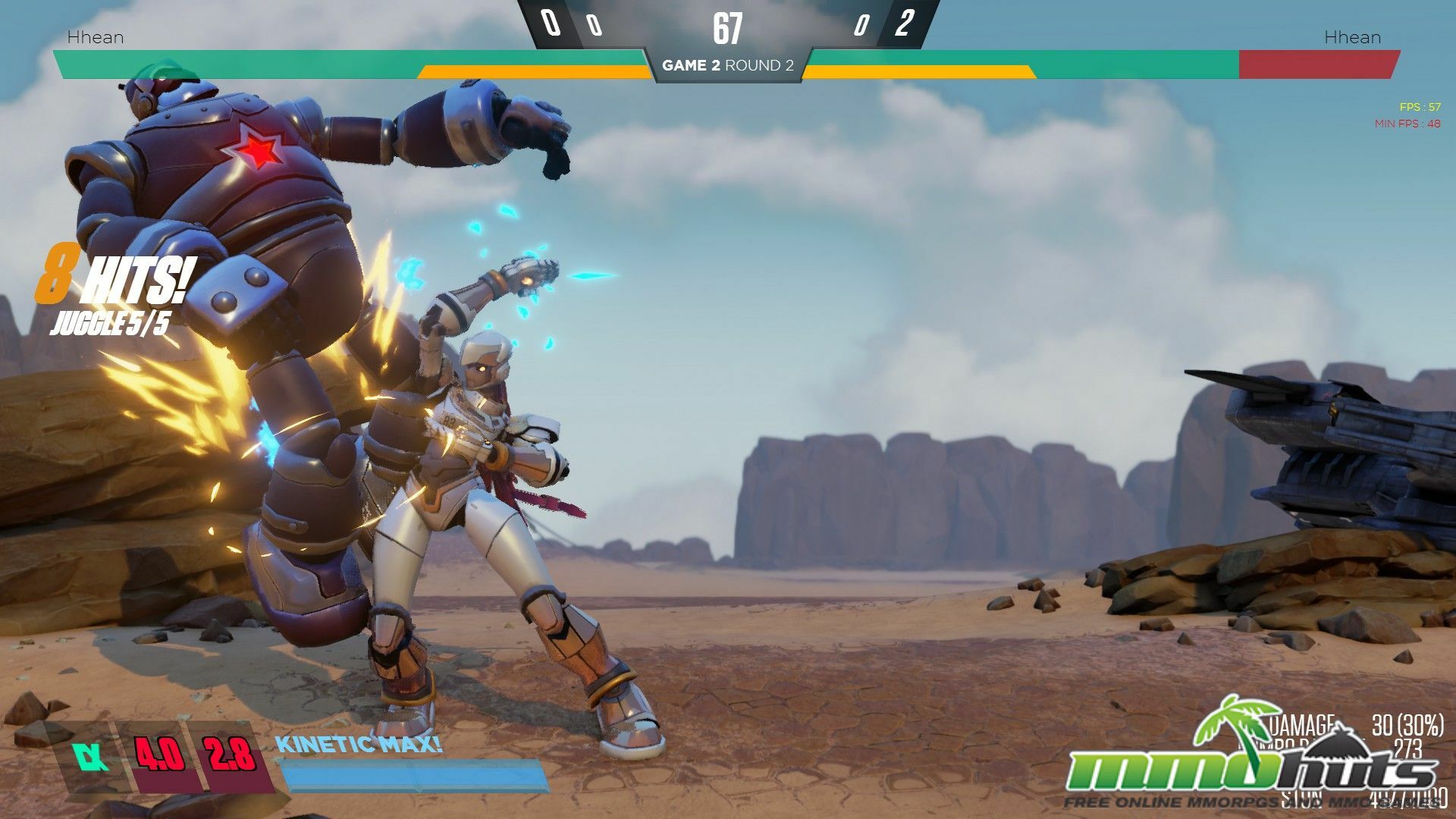 The best defense is a relentless offense.

Currently though the only real option is Kinetic Advance, which allows you to cancel any attack into a dash or jump, making your character go from the active frames of their attack to neutral instantly. This allows you to do some pretty heft extensions on a character’s combos, and also lets you backdash out of unsafe moves. Bursting seems less appealing when you can simply have this great combo tool while also being able to backdash cancel a reversal to get you out of any situation you please.

While I like having the ability to customise your loadout in this manner, I think it would be better if the player could have access to both these options during a match. As it stands right now there’s not really a choice between them, but in the rare times where a Deflect would be needed, it would be more satisfying to bust it out and understand that you just spent the resource that could have led to the big damage that brings you back into the driver’s seat of the match.

The online play is structured as a best of three matches, with each match being a best of three rounds. This longer format lets you get enough time with an opponent to begin to learn their tricks. If you lose, you genuinely played worse than the other person, rather than getting caught off guard by a new gimmick and having your opponent run off with their matchmaking points. 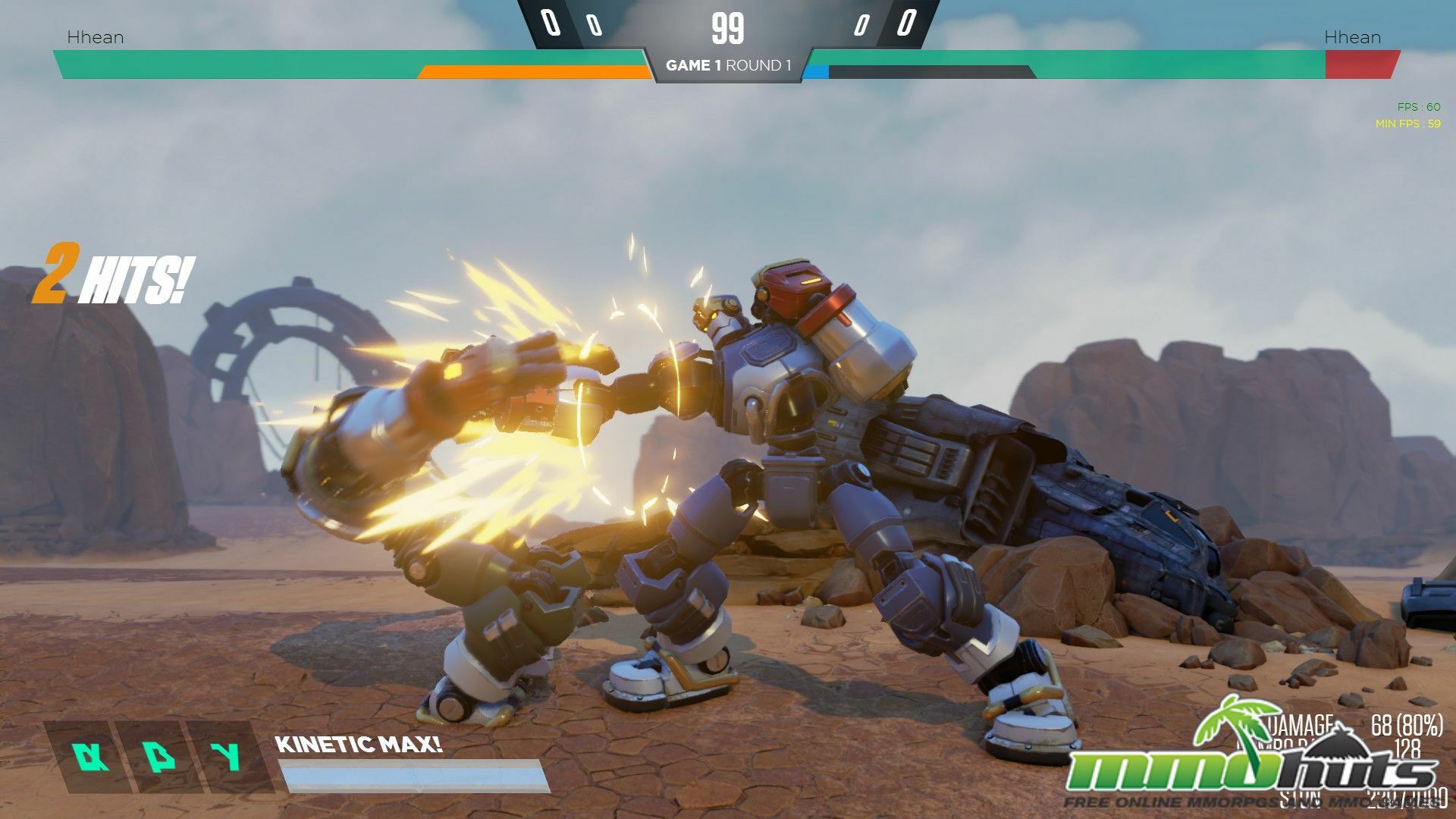 Online battles can go on for quite some time, so don't queue unless you're ready to go the distance.

The netcode is currently solid, but not as stable as I would like in a fighting game explicitly built with netplay in mind. It holds up in most games, but slowdown isn’t unknown. The worst problem in the alpha is one where after a match is done, a desync error can occur that resets the match counter to 0, nullifying the previous victory entirely. Having had this work both for and against me online, it’s a rather frustrating problem that hopefully will get ironed out as the game closes in on release.

Overall the game is surprisingly polished right now. The cast seem fairly well balanced, with no obviously dominant character just blowing up the competition. The only real indications that the game is just an alpha is the lack of features, with the big omissions being no custom lobbies for playing with friends, and no LAN or local support for taking it offline. More minor quibbles are the lack of stage and music variety, and the lack of dummy options in training mode. However, given just how early a stage the game is currently in, these are all likely to be added in the future, along with a few new members of the cast.

Given the ease of access alongside a decent depth found through spatial control, a good match pace and a small yet clearly varied cast of robots, Rising Thunder is looking like a really good fighting game. I think I’d be saying that even if it was charging full price, so the added benefit of it being free to play at launch can only sweeten the deal.

Now I think I’m going to afford this game a rare honour – I’m going to go straight back to playing it after I’m done writing this. As should you, as by the time you’re reading this, the game will be open for all to experience!