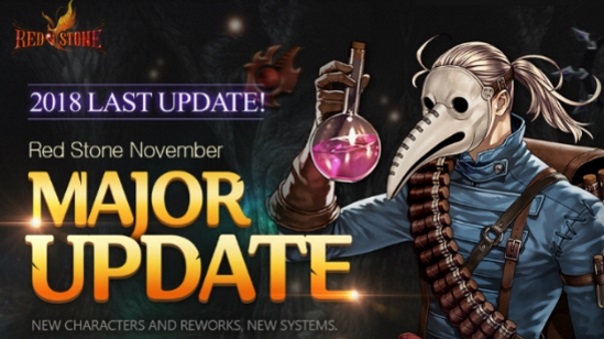 L&K Co. launched a major update for Red Stone Online on November 12th, 2018 that added more story quests, as well as a new character. Around 200 scenario quests were added, which dives much deeper into the Red Stone story. There are also rewards to claim after completing the main story, such as extra stat/skill points, Nephon Creature Cocoon, or Black Design Books used in Magic Injunction. These are gained through weekly repeatable quests.  Alongside this Main Quest 2, a new character arrived in the form of the Alchemist. The Alchemist is a transformation of the Musketeer class and focuses on eliminating enemies through alchemical creatures. Alchemical Fire and Homonculus are trademarks of the Alchemist. He also has useful buffs and heals for his allies through potions.

Three characters also saw a rework, in Tamer, Musketeer, and Werewolf. Tamer class receives 4 new elite pets, pet summon cooldown reduction, and “Treatment” skill heals pets at a percentage. As for Werewolf class, 3 reaction skill are changed into passive skills, and skill values are improved to maintain the original concept of the character while bringing in a new feel. Musketeer skills now provide much more utility such as crowd control. The class also receives an animation change to increase casting speed. The above “Magic Injunction” is also a new system that gives the equipment a specific set of effect with “Magic Ink” and “Design Book” items. Extra effects can also be gained with a full 5-piece set.