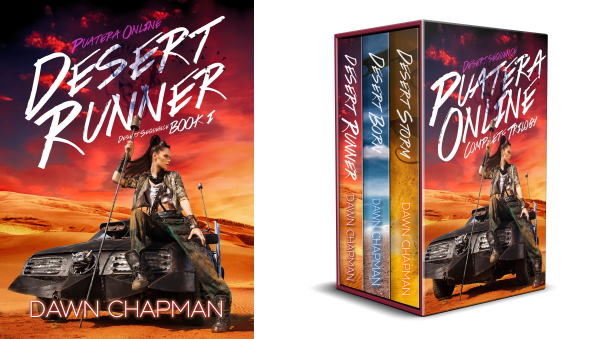 I love Mad Max and other post-apocalypse style books. In a way, they often feel to me like the next evolution of cyberpunk genre stories. Late stage capitalism fails, society collapses, and a few stragglers hang on by their fingernails in a world with few resources. What’s not to love?

The setting of Desert Runner, by Dawn Chapman, is Puatera Online. In this virtual reality MMORPG, the technology level is mostly archaic, with a few exceptions. One of these exceptions belongs to one of the NPCs of the game, Maddie. Maddie owns a high powered automobile with which she completes jobs, otherwise known as quests, with or without the help of the “Visitors” as she and her fellow NPCs call them.

What makes this story less common than most is that many of the NPCs of the Puatera Online gameworld are not only sentient, but they know that they’re programs. Those that have become self aware in this fashion often work to resist their programming and deny their “destiny.”

Maddie’s destiny, for example, was to fall in love with every male Visitor who showed interest in her. After the first Visitor that she fell in love with broke her heart, Maddie decided never again to allow herself to fall in love with one. When she finds herself trapped in her car for a prolonged period with a Visitor, in order to complete a quest he’s involved in, she finds herself drawn to the kindness of this man, despite herself. And despite the fact that she told her boyfriend Dail that she would marry him when she returned from her current quest.

The romance that blooms is a focal point of the book. The tromoal, a race of dragon-like flying creatures, are also pivotal to the story, and it is across the desert which is their breeding ground that Maddie must take her passenger. During mating season.

There’s plenty of excitement and thrills in Desert Runner, as well as romance that doesn’t feel over the top or excessive. Instead it’s a rather sweet and endearing part of the story, and I like the thought provoking nature of the book, given that it’s from the point of view of an artificial intelligence, essentially.

That’s always something I look for in good sci-fi: some sort of social commentary or question. Can an AI fall in love with a human? Can a human truly fall in love with an AI? The book explores these questions and more, over the course of its 107 pages. The read time of the audio book, which is narrated by voice actor Andrea Parsneau, is approximately 3 hours and 5 minutes.

This puts the individual stories of this trilogy as perhaps not the best value, but you can get the box set on Audible for the very reasonable price of $14.99, and all three volumes of the story are available on Kindle Unlimited.

While the stat inclusion in the first book was relatively light, there did seem to be a well thought out and planned game world, and I don’t think there necessarily needed to be more stats than there were. This game definitely qualifies under the LitRPG banner. I also didn’t feel like the author relied on cliches or tropes to tell her narrative. I would perhaps liked more individual scene setting, but there was enough to form a rough image in my mind, and I know some people prefer that to having everything spelled out for them.

All in all, I’d say that the Puatera Online series is worth checking out, and I personally am looking forward to enjoying the second two volumes of the trilogy, and will likely check out the rest of her writing as well.

If you’d like to enjoy Desert Runner, Desert Born, and Desert Storm, or any other of Dawn Chapman’s writing, you can find her on Amazon here.