Saturday was the big day for PAX South, sold out well in advance of the convention. It certainly showed on the convention floor and every theatre was constantly full as some epic panels were underway – starting with the real header, ArenaNet’s presentation for Guild Wars 2. 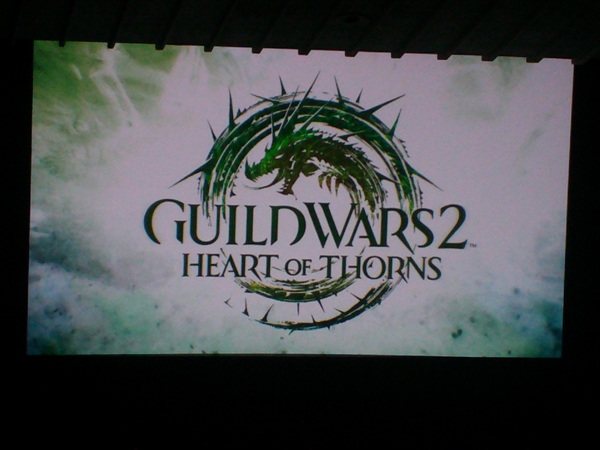 The big news ArenaNet hit us with is a brand new expansion for Guild Wars 2, Heart of Thorns. Each of the 40 Living Story episodes has built up to precisely this moment, and the company is looking to remain strong. Some might be shocked to learn there is no level cap increase and associated gear grind, but with all new systems in place such as Masteries, Specializations, and a brand new character class, there’s no shortage of progression available for everyone.

We’ll provide much more information on the expansion soon, and continuing coverage as more and more news comes out for Heart of Thorns. 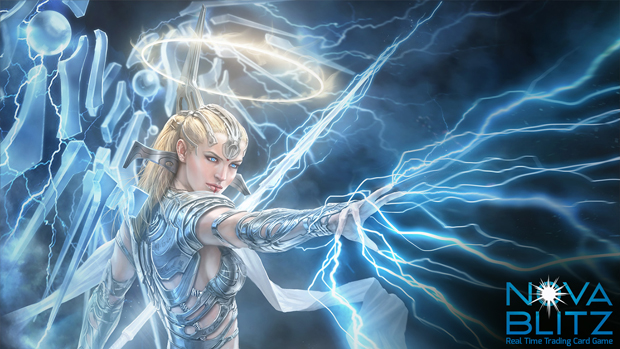 We spent some time at the booth for Nova Blitz, a cross-platform collectible card game currently on Kickstarter. Nova Blitz is a “real time” card game, in which both players take their turns simultaneously. This means that games are shorter since you don’t have to wait on your opponent, but it also means more intense matches, and even in our practice battle against the AI, we couldn’t afford to take our eyes off the screen for more than a second. 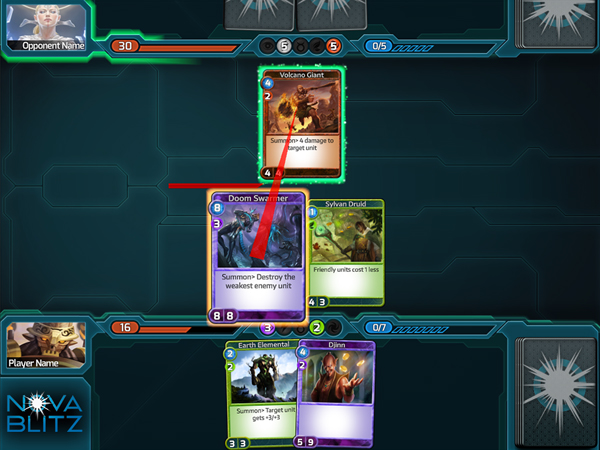 There are five deck types available in Nova Blitz, each specializing in a different tactical advantage. Otherwise the game is a bit like Hearthstone and Magic: The Gathering. Matches consist of two repeating phases, a tactical phase in which players can earn mana and play tactical cards, and a combat phase in which they can attack with their units. These phases last under 30 seconds each. Each card has a base cost so it is important for players to manage their resources and spend them wisely. 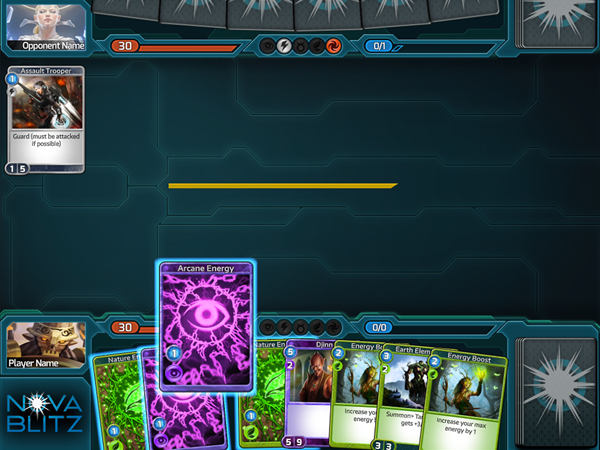 Perhaps it’s the game’s pacing, but we were already hooked after one practice match. With incredibly short turn phases, there’s almost no room for error. Players must be familiar with their decks and play with no hesitation. If you love CCGs, this game definitely deserves your attention. 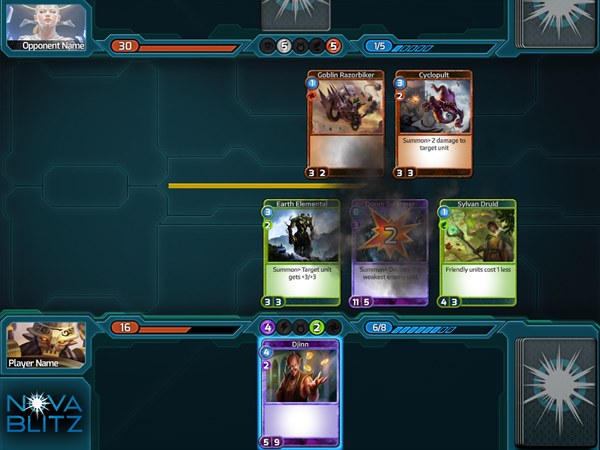 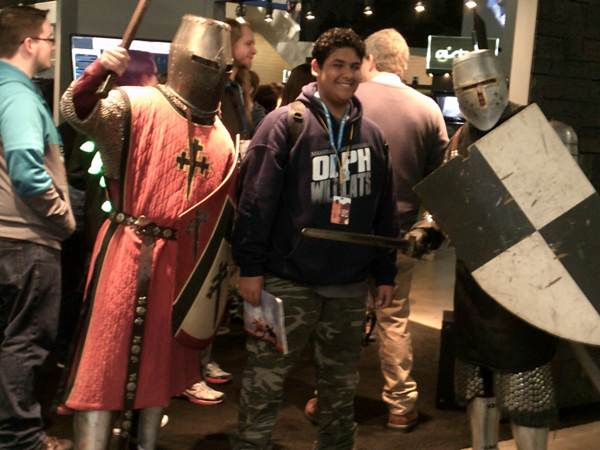 We made a quick drop in the Life is Feudal fort, which did a great job in making itself known by having two cosplayers in full medieval knight regalia happily posing with con-goers. Currently in early alpha on Steam, the game is a realistic historic-style multiplayer sandbox (with an MMO goal for the future). The gameplay is a mix of Minecraft and DayZ with a little bit of Ultima Online nostalgia thrown in. It’s a serious game for serious craft-and-survive gamers, but it has evolved a loyal following already. Though what was at the show was mostly what we’d seen of gameplay already, Bitbox has recently released a roadmap for the game’s development that has them pushing for a release in September 2015.

The PAX South floors are stuffed with a diverse range of small indie studios, and it’s easy to get sucked in to demoing games you didn’t even know you wanted to exist. For instance, I was mesmerized watching Bitfinity’s Tadpole Treble, a musical 2D side scroller where you dodge notes on a musical stave that looks like an interactive version of Mario Paint. In that same booth, though, I was ambushed by a mobile game worth mentioning: Swap Drop Poker. 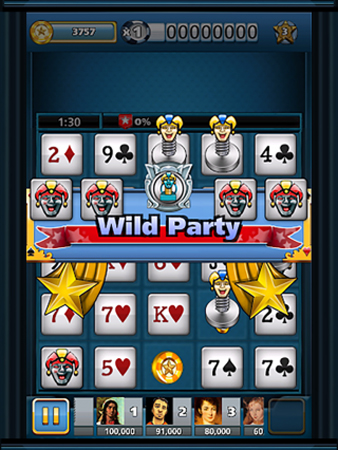 Swap Drop Poker is a puzzle poker game with match 3 type elements. Instead of consisting of colored bubbles or symbols, the board is filled with playing cards. You tap on screen to swap two cards anywhere on the board, and try to make the best poker hands you can in a line to earn points. You can have friends join in and compete with you to see who can earn the most and trophies too. While it’s not the most ground-breaking mobile experience, it’s a fun combination that poker fans might certainly enjoy. 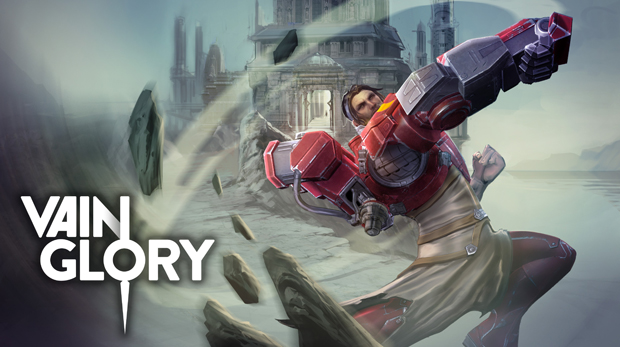 The Twitch booth was a constant hub of activity on the floor. While con-goers lined up to play HearthStone or watch Twitch’s stream as it was broadcast live, we slipped into a VIP meeting with Super Evil Megacorp, developers of Vainglory. For some of us, this was our first experience with the game, so we got a hands-on introduction to the game and its newest champion, Ardan. After learning about the character’s skill set and general gameplay, we sat down and talked with the company about Vainglory’s business model, game design, and its eSports future. We’ll have a full break down of this new information in the coming week. 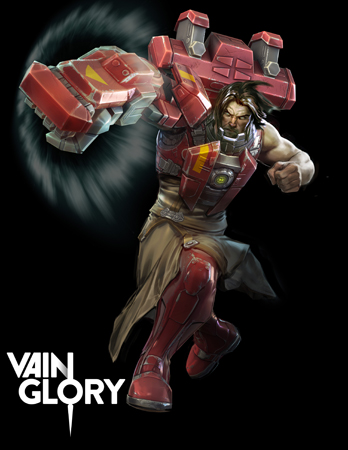 In between meetings, we paid a surprise visit to two indie booths that seemed to be drawing some attention: Steam Bandits Outpost and Bierzerkers. 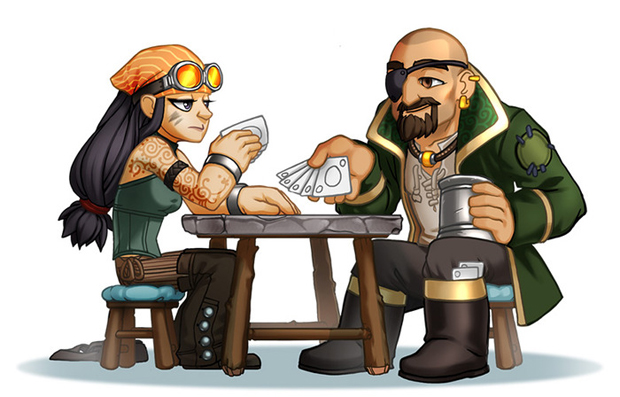 Steam Bandits Outpost is game that has a little bit of everything for the RPG fan. It draws inspiration from many titles including Final Fantasy, Recettear, Animal Crossing, and Pokemon. Despite drawing on some of the most classic RPGs gamers know, SBO has a pretty unique approach to the RPG experience. A free version of the game will be available on mobile, offering farming, deep crafting, player-run shops, and other multiplayer aspects. This portion of the game connects to a single player RPG experience where players battle in that classic JRPG style while exploring a 2.5D dungeon. If the game sounds up your alley, it’s now available on Steam Early Access.

Bierzerkers on the other hand is all about PvP. Created by Shield Break, a developer with several veterans in its crew, the game is a multiplayer class-based melee brawl with a slightly drunken twist (and no, it doesn’t come with free beer – a question asked by a visiting Deadpool.) Stylistically, the game looks a little like Loadout or Team Fortress 2, but make no mistake, this game isn’t simply copying the shooter franchise. The game is also in alpha for those who want to get a drunken brawl on.

The tinyBuild booth was big in spirit, and a busy place as every game in their growing roster was on demo, including the classic SpeedRunners and the upcoming Check In, Knock Out. We talked with the team about both titles and we’ll be following up this week and sharing our discussions about SpeedRunner’s take-off success and launch plans, and CIKO’s simple but fun multiplayer. 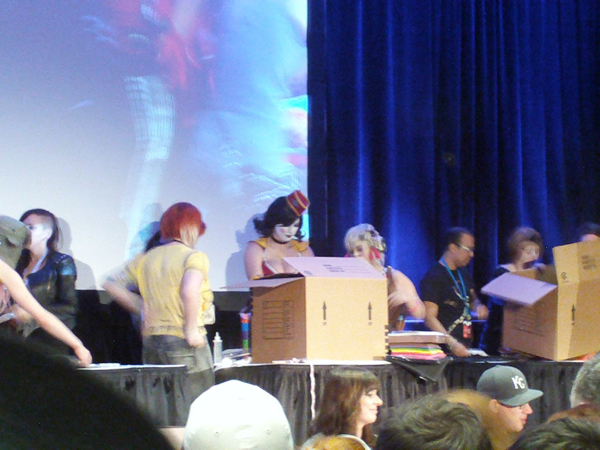 Four teams of four people each creating a Borderlands character costume doesn’t seem terribly hard, does it? Now throw in a strict one hour time limit, and the fact they’ve no idea what materials they’ll have until the competition starts, and you’ve the makings of an exciting competition dubbed the Iron Cosplay challenge. 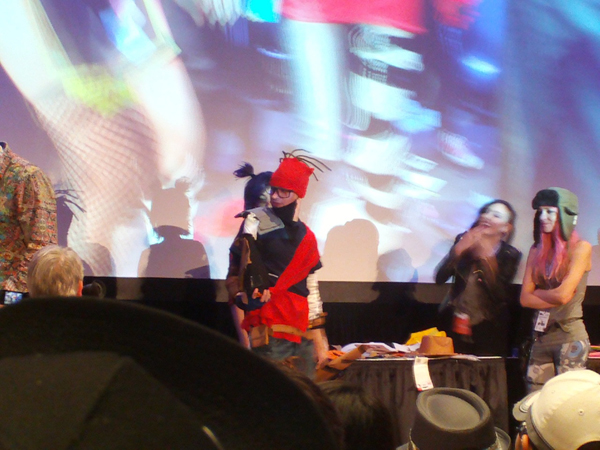 The teams decided to recreate Salvador, CL4PTRP, Mordecai, and Gaige, doing their best with what they had. Most impressive was the way they quickly came to task, having only five minutes to brainstorm how they were going to approach the task. While each was impressive, the team that recreated Salvador (complete with shiny blue tiara “mohawk”) took the impressive grand prize of a Borderlands loot chest signed by all the developers. CL4PTRP stole the announcer’s heart, as well, with the team winning an EVGA NVIDIA GTX 970 for their recreation. 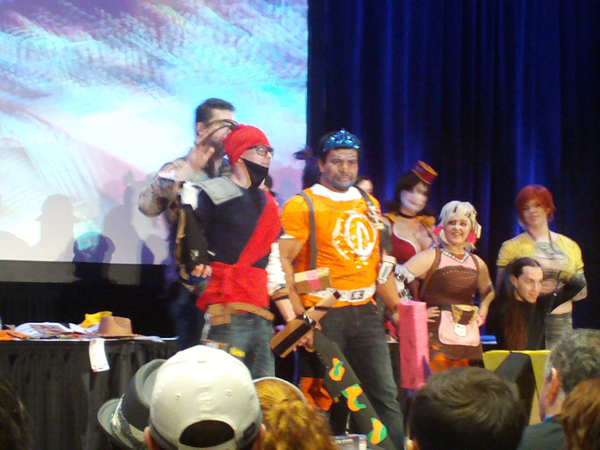 Day two has come to a close but the final day of PAX is about to begin and includes some important meetings! Look forward to a major break down tomorrow, which will include Dreadnought, Grey Box’s newest title that – if the live shoutcasting has demonstrated on the floor here already – is going to be an epic multiplayer experience you won’t want to miss.