I was really amped to see Forced 2! Anyone who has read my work thus far know I love card games of any sort. So I really wanted to figure out exactly how deckbuilding could be utilized within an arena combat game, with so much constant fast-paced excitement! I did find out that cards are only used before/after the level in question is done, which is a relief. Having to sort through cards as you go would probably bog the game down. Not having them in an order that would benefit you would be way too slow for this game, and when you are in combat you have to always be on the move, aware of traps dropping in, and what attack patterns the enemy may have. Sometimes the unit will follow you until you stop, and do a cone electric attack, so you have to stop, swerve around it and attack briefly, only to run again! 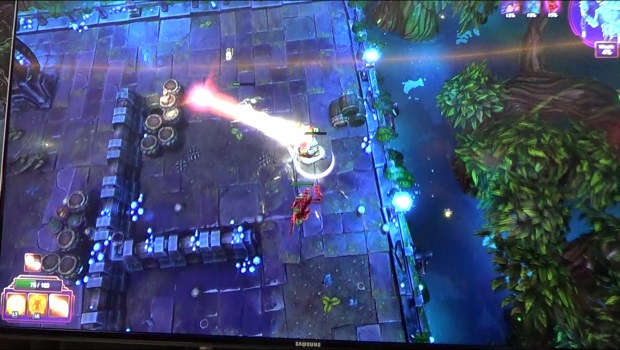 Much of the arena can be destroyed with your attacks, but that is not always wise to just destroy all the barrels, boxes, and crates that are in the path. This may be action packed, but it is also a game of deep strategy, where you learn what the enemy does, whether it is firing rockets or lasers, or punching you in the face! It may be wise to destroy part of a barrier, so you can move through it, and dodge around to allow yourself cover from homing missiles! Each of the characters you can play as will have unique powers to use that will influence the match, from temporary invincibility to knockbacks and damage. The stages themselves are fairly small, but you go through a series of them that lead you to a boss fight, which are intense to say the least. 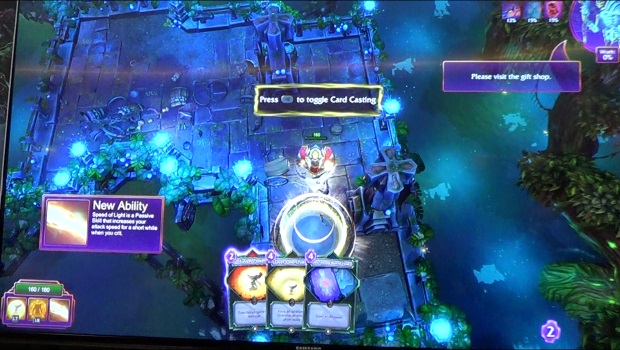 And now onto the cards! Your character can have up to thirty cards in your “deck”, which you gain from winning matches and defeating enemies. At the end of a match you have the opportunity to use some of these cards, which have a resource cost. So there is no dumping all of your hand of cards into your character before a round starts; if you run out of your resource, you have to wait until the next round to accrue more. I am afraid at this moment I do not know how you gain more resources, but I am certain it will not be a difficult thing to do. The cards themselves have a plethora of uses, from enhancing an ability that you have, to a guaranteed heal at the end of a round; you do not gain health after each round, and if you lose, you start the gauntlet of matches right back over. So cards that guarantee X amount of life back at the end of a successful match are fantastic. There’s so much excitement to look forward to in this, though it is single player (however, I did hear murmurs of co-op, so two players could share in this). In a way it felt like a more evolved Smash TV, a funny, fantasy riddled with clever dialogue and tricky enemies.

Continue to Life is Strange: Episode 2