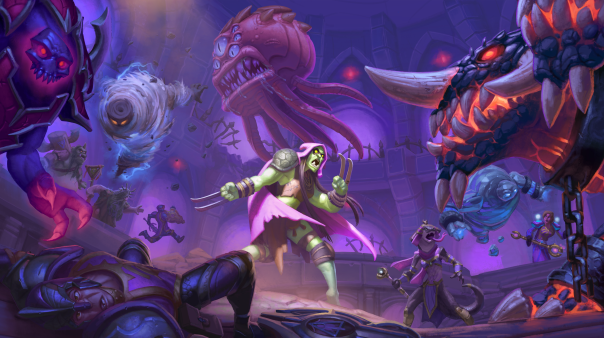 The single-player story in Hearthstone, The Dalaran Heist has the latest chapter live and available for play in the game. Players can go as far as Chapter 3 today, and the Arch-Villain Rafaam’s plan continues to unfurl. As low-level operatives in Rafaam’s League of E.V.I.L., players will rampage through the streets, spires, and sewers of Dalaran ensuring that every part of the plan succeeds. With the aid of King Togwaggle, Hagatha, and their lackeys, players have cracked the Dalaran Bank and released the denizens of The Violet Hold. The next target is the Streets of Dalaran themselves.

The Streets of Dalaran are packed with the carts of peddlers of precious wares—meaning there’s only room for four Minions on each side of the board. Make the most of the space available and take advantage of your opponent’s limited room. Madame Lazul has promised the Arrakoa flight, and Kriziki will do anything in his priestly power to assist the League of E.V.I.L. if it means flight. When attempting to cut straight to the heart of a city, it’s great to have a Rogue in your employ. Madame Lazul has promised the Vulpera pirate Captain Eudora riches beyond her wildest dreams. She only needs to deliver Dalaran in return. Captain Eudora and Kriziki have their own unique challenges in order to unlock two new Hero Powers each, and bosses to do battle with to bolster their deck options.