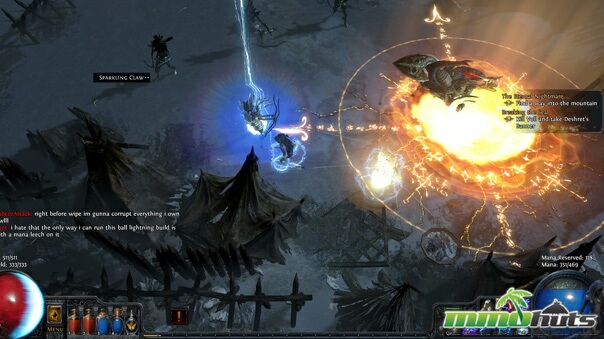 In the world of online isometric RPGs, there’s only really two names that you know will come up in any conversation. Diablo is the obvious answer, but over the past three years Path of Exile has established its dominant position beside it. By sticking to the roots of the genre and mastering it in ways even Diablo doesn’t live up to, it has become clear Path of Exile isn’t going anywhere. The community is tighter than ever, and clamoring for the next big thing to be brought about by Grinding Gear’s promised regular mini-expansions. Thankfully that time is nearly upon us, as my small group of friends gained access to the beta of The Awakening, the most bat shit crazy expansion yet to shake up the island of exiles.

The main draw of Path of Exile has always been its expansive character building system, offering an ever growing list of passives and character impacting gem choices to allow you to build nearly unique characters. Since every class shares the same tree (albeit a few variations in starting location), the choices of mixing in the weird to truly stand out has always been an option for the unique snowflakes of the gaming world. With the recent expansions, there’s now seven classes and countless leagues to give a player tons of room for replayability as well. That’s icing on the replayability cake when you consider a huge chunk of the content is randomly generated already, meaning you’ll never be able to sleep walk your way through Path of Exile content. Yet never satisfied, Grinding Gear has been putting in the most intensive Q&A ever imagined to try to push the level of customization to their passive tree to new balance breaking heights. Thus the multi-month beta to see just what ridiculous nonsense their community is capable of inventing with this new passive tree socketing system that may or may not reek chaos on both balance and the economy!

So these sockets are the key feature to The Awakening’s chaos. Each has different colors, basically building off of the existing equipment sockets. Some of these gems can be linked together to give bonuses, such as more damage, a bigger area of effect or anything else that changes the use of a skill drastically. Basically you can make single target skills into AoEs, add slowing effects to primarily damage abilities, make targets explode on death before automatically respawning as your zombie minions, and just about any other combo that strikes your fancy. You can even convert melee specific attributes to ranged, and thus creating more unique ways of building your character. The skills in Path of Exile aren’t locked to a specific class, since everyone can use the many different weapons as they like and can build their character based on that, you will find plenty of skills that everyone can use and you can toy around with.

I’d go on, but it is going to take months and a doctorate thesis to describe everything The Awakening is introducing into the skill tree, which I’m sure a member of the community is already compiling as we speak. All that’s clear from my time in the beta is you can expect far more grinding than ever before to obtain your ultimate set of passives and skills. And if this isn’t enough, in the new expansion you will also be able to find tons more unique weapons with grand new bonuses to further set your fighting style apart. Long story short, Path of Exile fans can say goodbye to their social life this summer, as these new systems combined will keep your hands full for some time.

Beyond the gorge of grind that awaits you, Path of Exile is at least expanding their story into the 4th Act with The Awakening. While I would like to give you a quick overview of what can be found in this act, Grinding Gear is too on top of player feedback to give anyone much of a chance. The beta has been repeatedly data wiped as feedback is addressed and patched at the pace of an alpha test. Still for those waiting patiently for the full launch, this should be a great sign that you can expect a seriously polished expansion soon.

What I did make it to included Highgate, home of ‘The Beast.’ Clearing drawing inspiration from the Book of Revelation, this Beast is kind of a big deal, as it is capable of triggering a world ending cataclysm should it be left unchecked. The zones I explored remind me of the older Roman times of plantation owners and slave gladiators, including miniature arenas that will trap you against a gauntlet of foes for the entertainment of… the devs I suppose? Random generation seems to be in overdrive in the new act, as these zones change drastically in each visit, with the map theme remaining the only constant.

As a fan of Path of Exile I am insanely hyped for the release of this new expansion. I myself couldn’t wait for a random invite to the beta, and choose to buy one of the supporter packs to get an early start experimenting with all the new character build possibilities. If you aren’t familiar with Path of Exile and are looking for an action RPG to play, then what are you waiting for? Since the game is fully free without any game breaking items in the cash shop, Path of Exile is the definitive game in the genre to check out. The new expansion The Awakening has a promising and fun new ‘act’ that fills out some key missing holes in the story. With the new ways of building your character, The Awakening is a thing to look forward to for fans and newcomers to the game alike.