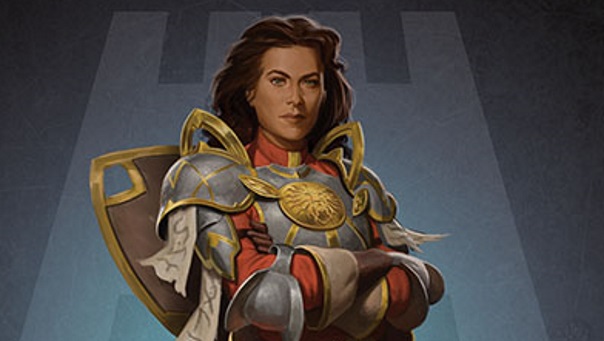 This month, Pantheon: Rise of the Fallen continues to tease and reveal more character classes, with this month’s focus being on tanks. The three on offer are the Dire Lord, Warrior, and Paladin and we’ll talk a little about all three of them right here. The Dire Lord is considered a myth by most, and fill the role of a utility tank. Generating Essence with a percentage of the damage they deal, they can wield one-handed/two-handed bladed weapons, and receive a bonus to critical strike when wielding one-handed weapons and a bonus to critical strike damage when using a two-handed weapon. They are relentless in battle, capable of self-healing and a relentless, aggressive attack strategy. Dire Lords can be selected by Dark Myr, Humans, Ogres, and Skar.

A Warrior is so much more than a mere soldier. They seem to almost defy the modern mortal limits of resilience and strength. Not merely content with fortitude, Warriors also strengthen their minds, to be a master of both tactics while simultaneously massacring their foes on the battlefield. Warriors can wield all weapons, though are best suited to having a Shield in the off-hand, as several of their Tank abilities require thus. Warriors have two resources, Battle Points, which can be used to perform Heroic Acts with three (with a cap of five), and then there is Resilience. Maintaining high Resilience in battle is key, and is not a resource that is spent per se’, rather, the goal is to keep it as high as possible, or at least build it back up if it falters. Warriors can be played by Humans, Ogres, and Skar.

The calling of a Paladin is a holy one, and the Humans and Dwarves that were once Clerics that now take up a different order are led by their convictions. Paladins can wear any armor, but would probably be more suited to platemail, and can wield One-Handed Edged/Blunt weapons on top of Two-Handed Edged/Blunt weapons. Paladins let go of the dogma of their Clerical Order and instead devote themselves to mastery of arms and armor, and with an unquenchable hunger to obliterate the undead, they will defend the weak and punish the curse of Undeath with violence. As Paladins take damage from enemies they gain Wrath as well as a certain amount (based on their Constitution) each time their group defeats an enemy.  Certain abilities will also increase Wrath by a fixed amount, and others will have a Wrath cost. Paladins can also generate Reckoning Points (up to 3) and can use them to perform heroic feats, much in the same vein as the Warrior.